Salisbury Meditation – Music for the NHS

Hi-Fi+ has something of a connection with Salisbury in general and Salisbury Cathedral in particular. And while 2020 was a year where the cathedral was often stilled due to the COVID-19 pandemic, 2021 has seen the cathedral become a focal point once more… for vaccination. While many of us have had our COVID-19 vaccinations in pharmacies, anonymous local authority office buildings or 20th Century built Church Halls and sports clubs, the good people of that city in Wiltshire have received their armful of vaccine amid the Early English Gothic splendour of Salisbury Cathedral.

While they waited in socially distanced quiet along the nave of the Cathedral, the people waiting for their vaccination were given a gently soothing musical backdrop of live music played on the spectacular – and recently restored – Father Willis organ. And while GPs (family doctors) from the Salisbury area who form the Sarum South Primary Care Network will began administering the second round of covid vaccinations for the over 80s in Salisbury Cathedral, this last weekend, an album of that music was released on Monday: Salisbury Meditation – Music for the NHS. This is a digital album of classics played during the vaccination sessions. Profits from the recordings will go to NHS Charities Together, the membership body for 241 National Health Service charities that give £1 million every day to help UK hospitals do more.

The numbers are impressive. The Sarum South Primary Care Network has supplied more than 25,000 vaccines at Salisbury Cathedral since the vaccination programme began rolling out in January 2021, and both the Director of Music (David Halls) and the Assistant Director of Music (John Challenger) for Salisbury Cathedral have between them clocked up more than 270 hours of organ playing for those waiting for their jabs. And now a selection of that music has become one of the only live recordings made in the UK in the first quarter of 2021.

Salisbury Meditation – Music for the NHS is a collaboration between John Challenger, the Cathedral’s Assistant Director of Music, and award-winning classical music recording producer and engineer Andrew Mellor of AJM Productions Ltd, it features sixteen tracks played by John on the Cathedral’s renowned Father Willis Organ. The album is being distributed by classical music specialist [PIAS] UK.

“I approached John about the album because I wanted both to contribute to the NHS effort but also to raise awareness of music and musicians and the role they can play in healing and coming to terms with the kinds of tragedies we have seen during this pandemic.” said producer Andrew Mellor.

“We face difficult times ahead in art, music and culture, and this story has shown the value and importance of music, and its role in sustaining our wellbeing and happiness, and in enriching our lives.”

According to John Challenger, “Many of the patients who come in are already part of our congregation and community, and their vaccination provided their first outing in a very long time. There were tears. I think coming into this sacred building, having not heard ‘live’ music for so long, meant a lot to them, particularly hearing our beloved Father Willis organ once again. It has certainly marked a milestone in my life.” 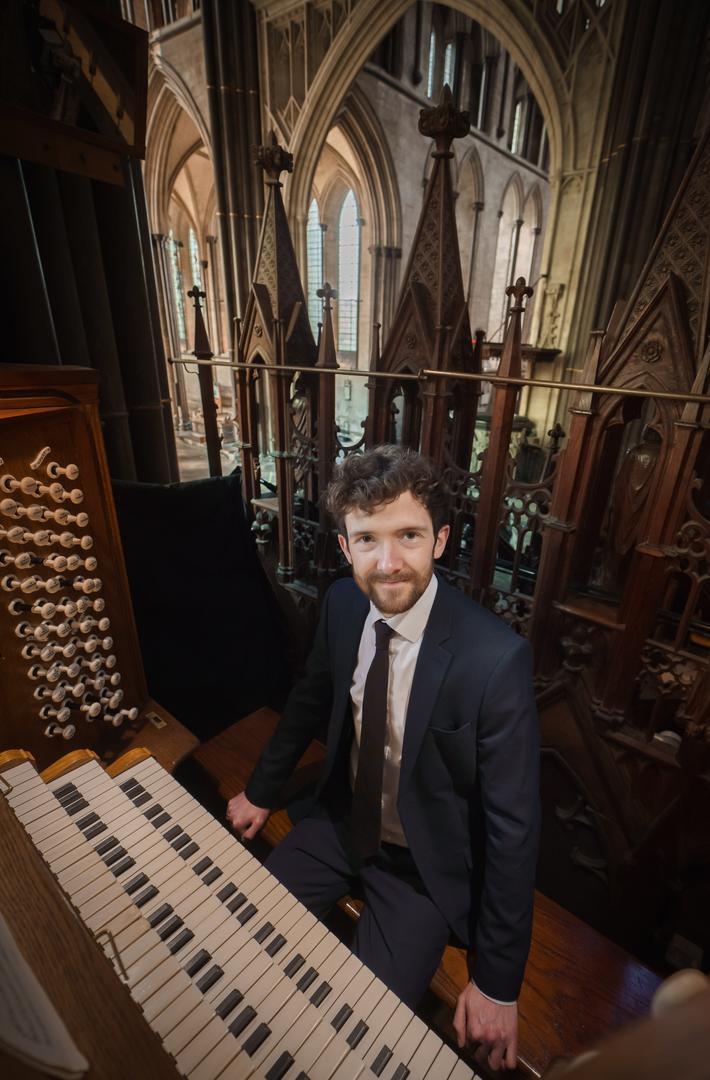 “When Andrew and John approached me to distribute the album,” said Richard Gay, Head of Classics at [PIAS] UK and a resident of Salisbury, “we seized the opportunity to be a part of this great project. We believe there is an appetite for this sort of music at this moment in time, and the various arrangements for organ work so very well here, it has resulted in a first-class recording. John’s sublime playing, together with the wonderful tones of the recently-restored Father Willis organ, make this a wonderful collection of Meditative and Calming music that all can enjoy and in doing so, support such a very worthy cause.”

Ellie Orton, Chief Executive for NHS Charities Together felt that, “It was inspiring to see the reports on how the Cathedral had adapted to being a vaccination centre and it must have been wonderful for those getting their jabs to hear John’s music. I urge everyone to buy the album not least because the funds raised will help us continue to support NHS workers, volunteers and patients at the centre of the crisis, and every donation will make a difference.”

Salisbury Meditation – Music for the NHS is available for streaming and download from Apple Music, Spotify, Tidal, Presto Music and all other leading music service providers. The track listing in full:

The album itself is both extremely well recorded and very well played. The tone of the Father Willis Organ is both sonorous and portrayed well in its natural acoustic. Given the material and its intended audience, this is light classical music rather than aural workout, but it’s both perfect for quiet contemplation and a good excuse to give money to a vital cause. Given that most people are emotionally frazzled at the moment, and are at ‘peak frazzle’ as they receive their vaccinations, it’s little wonder there are tears here. Also, given that this might just be the first live music some people will have heard for a year, the level of emotion here is conveyed well.

I don’t want to focus too much on a review, and that’s nothing to do with the music or the recording itself (both of which are first rate). It’s that the reason for the music is a cause for celebration, not criticism. This is the sound of a little bit of the world coming out from under its shell once more and that’s a beautiful thing. The fact listening to that beautiful thing also helps raise money for NHS Charities Together is icing on the cake. We Clapped for Carers, now buy the soundtrack!

The image for the album cover was supplied by Declan Spreadbury, Central Booking Coordinator for Plastic Surgery at Salisbury District Hospital and a keen photographer in his spare time. All other images by Ash Mills.

WIN! One of two sets of four Kuzma Damper Feet worth £600 per set must be won!!!