Products that aim to mitigate the sonic damage being done to audio reproduction by electromagnetic and radio frequency interference are common. Not least because the latter is a higher frequency version of the former. However, there is a third corrupting influence that is less frequently addressed. It is microphony. Quiescent is one of the few brands attempting to reduce EMI, RFI and microphony.

If we leave aside micro-tremors from the earth’s crust and from traffic, microphony in our audio systems has the same primary source; the speakers. The acoustic energy from them modulates ambient air pressure against our eardrums, but it also vibrates our audio system too. Inside most speaker cabinets, the crossover is bombarded by energy from the rear of the speaker drivers. Meanwhile circuit boards in system components such as amplifiers are effectively palpated by the modulated air in the room.

Those who paid attention at school will recall that physical energy applied to a conducting material is converted to electrical energy. During normal playback, our systems are processing not just the musical signal that we want to hear but, electrical artefacts that we don’t want to hear. These travel back down the speaker cables to the amplifier, and propagate from discrete components such as capacitors in system separates. They become particularly audible when contending fundamentals or harmonics beat against each other to produce intermodulation distortion, typically heard as ringing.

Even if our audio system is powered through a filter or regenerator, and even if we turn off everything electrical in the house and listen through headphones, we still cannot escape radiated electrical energy and microphony. Audio separates, in particular digital devices, and some discrete components too, are themselves active emitters even when simply passing an audio signal. Once EMI, RFI and microphony have entered the signal chain our costly wires simply perform as conduits for the unwanted noise.

Quiescent has been ploughing something of a lone furrow in its focus on EMI, RFI and microphony mitigation, and in particular on both prevention and removal. The company’s approach is two-part: speaker, interconnect and mains cable designs that resist mechanical excitation and which absorb EMI/RFI, plus passive devices — the company calls them Couplers and Modules — that drain microphony, EMI and RFI. Quiescent is patenting globally the technology used in a new generation of Couplers and Modules, and invited this publication to be the first to try them.

The Apex Speaker Module is a block of black anodised aluminium, machined from billet, with no parallel faces and an acoustically disruptive milled pattern on the outside. It is about the size of a house brick, but weighs rather more at some 4.5 kg. Two continuous lengths of solid silver conductor wire run internally, starting at a pair of silver WBT binding posts and emerging at the other end as a length of captive speaker cable terminated in silver WBT bananas or spades. The first generation Module clamps the naked conductors between two halves of a multi-directional, multi-length labyrinth formed of ceramic. Designed to present a virtual black hole to acoustic energy, the labyrinth prevents transmission either from the speaker to the amplifier or vice versa. The module also contains a passive electrical network to burn off radiated RFI.

Sceptical in the extreme

I tried this early version of the Module in 2018, sceptical in the extreme, but in my system, with two types of amplification and three different speakers, the noise floor was lowered, tonal density and timing cues were enhanced, dynamic energy increased and sound-staging improved. I bought the review pair and for over two years they were a key element in my system, allowing me to hear more deeply into recordings, and to discern more clearly how review kit performed.

Quiescent’s revised Peak Speaker Module has the same form-factor and operational principle as before, but the labyrinth is now made from a composite of granite, ceramic and a high-carbon polymer, the latter material being the subject of the in-process patenting. The company is opaque about the ratios of the three elements, and over what bandwidth the new Module works, except to assert that it is effective on microphony over a wider range than before, and that the carbon polymer increases the bandwidth over which unwanted electro-magnetic energy is absorbed.

The new Apex 40 Couplers are not footers or supports as we might understand the terms, but 3D printed shallow boxes, overall a little less than the size of two packets of playing cards laid side by side. Like the Modules their exterior is irregular with a deep acoustically disruptive pattern. They contain the same tri-material and a passive RFI absorbing network. A sharply pointed electrode on top allows the Couplers to drain acoustic vibration that would otherwise cause microphony, and to terminate radiated electrical energy. 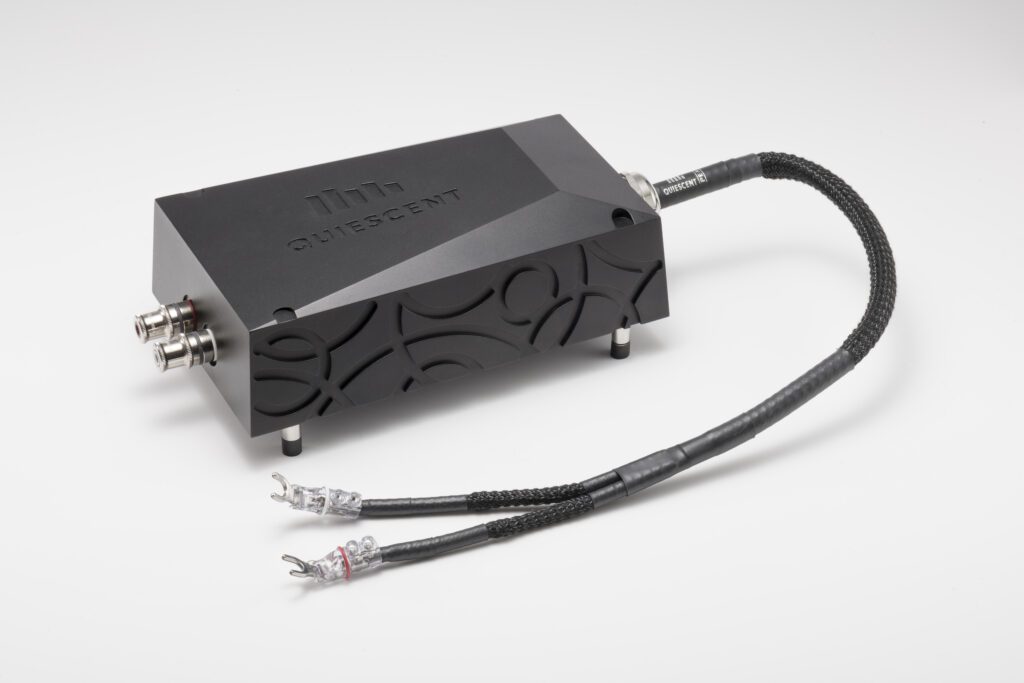 Meanwhile, the Peak Speaker Modules were compared back-to-back with the previous model in my review system, placed between a Bryston 4B Cubed stereo amplifier and PMC MB2se speakers. They brought a far-from-subtle further lowering of the noise floor, the increase in dynamic headroom partnered by greater tonal density, and better focused spatial detail. Improved intermodulation suppression tamed piano recordings that had previously been teetering on the edge of offensively bright and ringy, while excessively sibilant voices were calmed. Bass weight and definition also increased – a finding that Quiescent says results from even more unwanted artefacts being stripped from the signal chain leaving the amplification with less work to do.

The company says the Apex Couplers should be placed under a component either side of the power supply with the third opposing, like a tripod. A firm press from above on the review system DAC enabled the Couplers to make electrical contact with the chassis, and there was an immediate reduction in background hash, stridency and hissy sibilance.

Further sets of Couplers were then added in turn under other components. The sonic gains were cumulative, particularly striking with the CD transport, DAC, pre-amplifier and phono stage, slightly less so, but still very worthwhile, with the power amplifier and turntable power supply.

Fully equipped with Couplers and the Speaker Modules, the review system, no slouch before, was transformed in every dimension, delivering greater dynamic agility and power, tonal density and timing cues; in all posting a quite remarkable cumulative uplift in performance that most listeners familiar with the system put in the order of 50%.

Improvements in perceived timing were particularly noted, there being a greater immediacy and drive that made complex, multilayered and polyrhythmic programme easier to listen to and appreciate. It reminded me of my ‘yikes, this is closer to live’ epiphany on first hearing a pair of Kii Three speakers, phase-correct right across the audio band and thus able to deliver more of the you-are-there experience. There’s no suggestion of equivalence here; but by doing what they do do, the Modules and Couplers brought about a very obvious reduction in the degree of damage being done to phase by the review system’s non-DSP disk-to-speaker audio chain.

The elephant in the room is of course cost. Using the Quiescent products in even a simple system is not for the faint of heart or shallow of wallet. It would take particular bravery to put a pair of £4,500 Modules with £1,000 floor standing speakers. Would the result be at least £5,500 worth of sonic value?

However, in the context of the total RRP of the review system, the cost/benefit ratio of the Quiescent products can, in my view, be easily be justified; does it need to be said that a 50% gain in sonic quality is not trivial?

The most likely explanation for Quiescent’s shyness over measurements is not that it hasn’t done any — come on, of course it has — but, probably correctly, the company understands that expensive products like these are not bought by customers on the basis of metrics, but of audition. And that is the market model that Quiescent is now returning to after a three year dalliance with direct selling. Dealers who will carry demo stock and facilitate no-risk in-home evaluation are being appointed across the UK.