The turntable range from Pro-Ject now extends to 23 models, so it’s no wonder that when a new one comes along, it can wind up with a rather unwieldy name. The Debut Carbon Esprit SB is so-called because it is has a ‘Debut’ plinth and is top of that parituclar range, ‘Carbon’ becaue of the carbon fibre tonearm and ‘Esprit’ because that’s an old Pro-Ject appellation for acrylic platter models. Which leaves ‘SB’ and that stands for Speed Box, which is not a separate box but denotes electronic speed switching. So there is a logic to the nomenclature, albeit not one that extends to the name appearing on the turntable itself; in fact, there is no visible branding at all. In an effort not to fill the review by repeating this deck’s full title, I’ll call it Debut from now on.

This attractive turntable is supplied with an Ortofon 2M Red moving magnet cartridge installed in the headshell of the one-piece carbon-fibre tonearm. All you have to do to set the arm up is twist on the counterweight until the arm is balanced then attempt to align the zero point on the dial with the peg sticking out the back of the bearing. It would be easier if there were a mark along the top of the arm stub to align the downforce dial, but you can get pretty close to the desired 1.8 gram tracking force by eye from the cartridge end. Anti-skate bias is provided by a weight and thread as has always been the case with Pro-Ject arms, and while it’s a slightly fiddly business to put on you only have to do it once. It’s interesting to note that Rega has abandoned bias adjustment on its entry level arms because moving magnet cartridges tend to have similar downforce and anti-skate requirements. This saves them money and us fiddling around, and so is a welcome – if perhaps controversial – move. 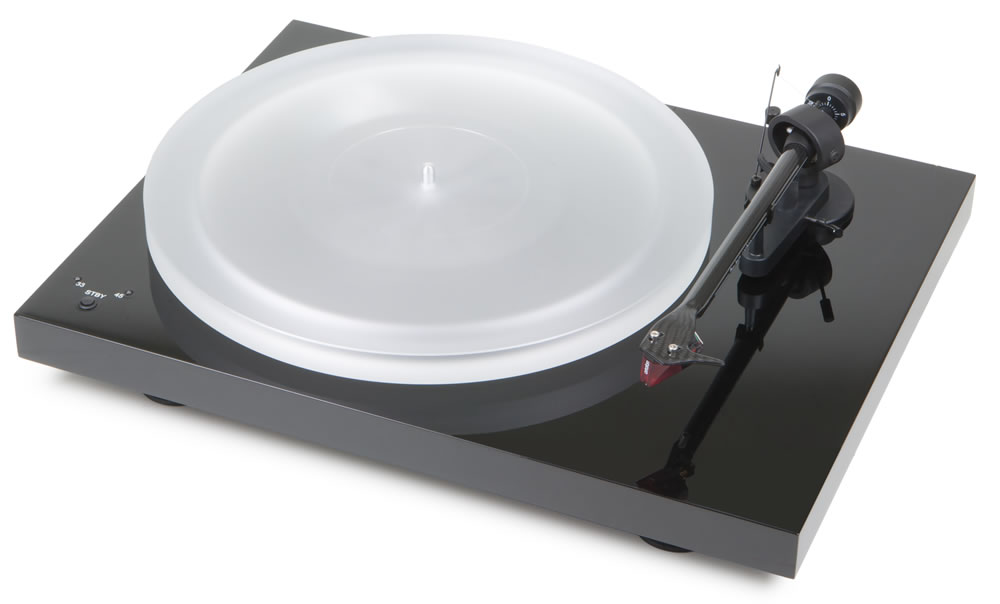 The Debut is a nicely executed piece of equipment with the advantage of electronic speed switching, the latter being an intuitive system; press once and the 33.3rpm light flashes until speed is stabilized, press twice for 45 or one long press will turn it off. You can even have the platter spin at 78rpm if you move the belt to the larger pulley, but a cartridge change is required. Dust is kept at bay with a plastic lid, an underrated accessory that few ‘serious’ turntables offer to their detriment, and power is provided by a wall-wart supply.  The arm base has a pair of RCA phono output sockets and an earth point, so it’s easy to upgrade the arm cable. However, the Connect-IT E cable supplied is quite a smart example with a clear casing and twisted pair wires inside. The inclusion of an acrylic platter on this Debut is described as “an excellent playback platform” by its maker, but it’s notable that there are only three models equipped with this type of platter in the range and these are found at the top of the budget turntables. Most of the ‘bigger’ models use aluminium sandwich platters with a mat.

The Debut has a smooth and easy to enjoy presentation. It is particularly good at rendering the flow of the music regardless of style and this, combined with a high degree of finesse for the price, makes it the perfect partner if you want to chill. But given that the affordable end of the turntable market caters to a younger audience these days chilling is more appropriate. In truth, this Debut is probably still a little bit pricey for teenagers or students and it doesn’t have facilities like an onboard phono stage, USB output, or Bluetooth connectivity – all of which potentially bodes well for sound quality, if not necessarily ‘youf’ appeal.

The Ortofon 2M Red is a decent cartridge for the money (£89) and helps the Debut to deliver detail and tonal depth that contribute to the effortlessness of the sound produced. Leo Kottke’s Great Big Boy [Private Music] is a record of acoustic guitar and band with Kottke’s laconic singing. There is plenty of guitar string zing and lovely fretless bass timbre to enjoy with this turntable. Its calmness of delivery means that low level sounds are well catered for, which goes a long way to producing an engaging result. The kick drum on ‘Nothing Works’ has good impact and much of its reverb breaks out into the room; the sonic picture is not the biggest available, but it’s adequate and varies significantly between records which is a good sign of fidelity.

Bass extension and power is good if not spectacular. Burnt Friedmann & The Nu Dub Players Just Landed [Nonplace] could have more visceral grip and bigger dynamics, but the bass remains tuneful. Timing is something that most turntables can do almost by instinct, but some are more definite in this respect than others and this Debut is more about flow than stop/start leading edge definition. 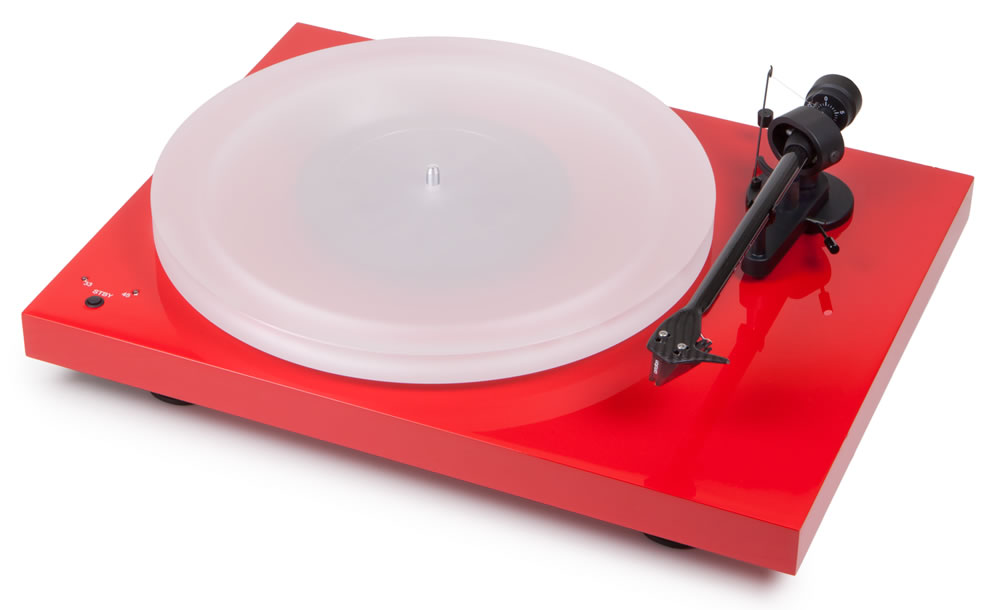 There is something charming about the Debut’s approach to tempo, too – something that works really well with the lilting groove of Conjure’s ‘Betty Balls Blues’ [Music For The Texts Of Ishmael Reed, American Clavé]. Here you get lots of sumptuous tone from the brass, piano, and voice of Taj Mahal, the latter giving Reed’s fabulous words the full works. He is clearly a character when it comes to laying down the jam, and it’s a pity he hasn’t done more left-field stuff like this. The Debut helps the lyrics sound very clear, and the reverb applied to the voice is equally easy to appreciate. The sax solo on the follow-up track ‘Untitled’ is likewise extremely lyrical; it’s very easy to forget about the mechanics of the replay equipment and be carried away by the tune, very easy indeed.

With Mike Valentine’s rather more recent D2D recording of The Four Seasons [Interpreti Veneziani, Chasing The Dragon]the Debut reveals rather more groove noise and pops than usual. It could have more scale. But, while it’s tonally a little thin, the aforementioned fluency does give it the power to captivate the listener. It would have been nice to have heard more of the body of the sound that this fabulous recording captures, but the Debut’s relaxed demeanour does mean that you don’t get as visceral a result as can be achieved with the best alternatives at the price. Put on something like Binker & Moses’ saxophone and drums [Dem Ones, Gearbox], an album that is all about the physical nature of the instruments, and the Debut’s calming qualities bring out the melodic side of what can often seem like nothing more than a display of muscularity. By limiting the full power of the recording, it cuts through to the heart of the composition; whether you want your turntable to provide this sort of filter is a matter of taste but it certainly doesn’t lack appeal.

Neither does it dull more refined musical styles. Steely Dan’s ‘Gold Teeth’ [Countdown to Ecstasy, ABC] retains its fabulous contrapuntal rhythm and it’s easy to appreciate the beauty of both the lyrics and the playing, Victor Feldman’s conga is great, as is the pedal steel guitar and voice. In fact the whole piece is brimming with life; it could be more realistic, perhaps, but not a lot more engaging.

You get plenty of voltage from the Ortofon, which means that it will work with pretty well any MM phono stage. This might seem basic, but I have come across some MMs that require more gain than you might expect at the affordable end of the spectrum. I tried it with an iFi iPhono2 external preamplifier and into the MM input of a Rega Elex-R integrated amp and got great results in both cases.

Playing Laurie Anderson’s Strange Angels [Warner Bros] with the Debut I was struck by just how much of the recording’s character comes through. This is a polished, and distinctly eighties sounding album with sumptuous bass and mountains of reverb on the kick drum. The Debut let’s you know all of this and more in its own effortless style. Pino Paladino’s fretless bass sounds great and the guitar shines with a brilliance born of expensive studio time. The track made it clear that with an amp and speaker of appropriate price, the Debut is well balanced; it may be a little smooth, but that makes the job of the system easier than a more revealing source. Pro‑Ject didn’t get to 23 models with massive investment and a huge marketing budget; it did so by making turntables that sell and sell well. The Debut Carbon Esprit SB will undoubtedly join those ranks.