Beyond Frontiers Audio (BFA) was founded in 2009 to design uncompromising, high-performance, handcrafted, hybrid electronics. Presently, the company has a three-strong ‘Tulip’ amp range, comprising stereo and mono power amplifiers, and the integrated amplifier tested here, all of which share the same substantial aluminium chassis.

Weighing in at a meaty 42kg, the Tulip SRPP is one of the heaviest integrated amplifiers in current production. There are good reasons for that high mass, though; a rigid chassis minimises the deleterious effects of flexing or resonating PCBs and this makes the amplifier more frequency stable as a result. In addition, the Tulip SRPP is rated at 250 Watts per channel and that large chassis is a useful means of heat dissipation.

The ‘shared chassis’ concept extended back to the previous iteration of the Tulip amplifier, but similarities end there. The original version of the Tulip simply sported a capacitor between the valve and solid-state stages, but BFA radically revised the amplifier. Specifally, BFA followed the logical progression from understanding that capacitors undermine sonic performance to actually removing those capacitors–something that was hitherto impossible in a shunt-regulated push-pull amp. 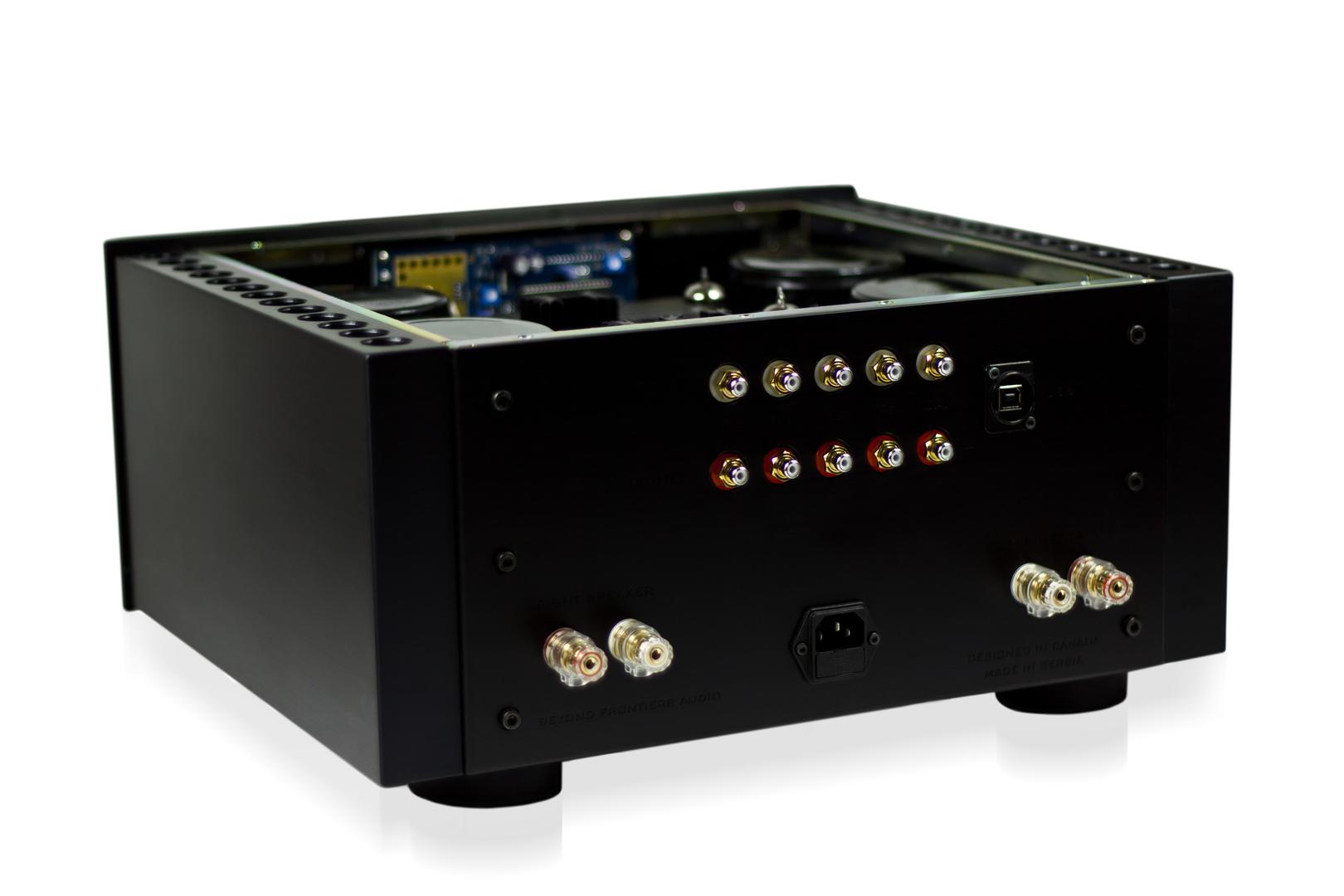 The Tulip SRPP is a hybrid design that achieves all of its voltage gain thanks to a pair of JJ Tesla ECC83S valves, together with two E88CC valves as a virtual ground reference. This voltage gain stage drives an output stage made up of Toshiba bi-polar transistors. The amplifier is a unique design by amplifier expert and BFA head designer Andria Saolcki, where the valve gain stage is connected directly to the transistors without capacitors or coupling transformers. The idea is that you get a direct valve sound that combines the freedom and openness of OTL (output transformerless) designs with the ability to drive virtually any loudspeaker thanks to the transistor output stage.

BFA’s Tulip SRPP has zero global or local feedback and uses passive relays for volume attenuation, for the best possible signal attenuation. At power on, the dot matrix display on the front panel tells you how many hours the valves have been run for, followed by a deliberately slow valve warm up designed to maximise valve life. The display shows input and volume, with a descending decibel figure as well as an ascending numerical level to keep both nerds and real people happy.

Controlling the Tulip can be achieved from the front panel button array, or through a supplied remote handset. Instead of the standard ‘plastic fantastic’ handset, the remote matches the amplifier in its brushed aluminium finish, although this can make button legends somewhat difficult to read. And ‘difficult to read buttons’ is one of the few criticisms you can level at the Tulip SRPP!

This amplifier is a single-ended design with four line inputs on high quality RCA sockets, and there is provision for optional preamp outputs should they be required. Our sample came with the optional DAC instead, which offers two coax S/PDIF inputs and a USB socket. This is the first high-resolution USB input I’ve encountered that does not require custom drivers for Windows users; let’s hope that is a portent of USB inputs to come.

The DAC chip is a Burr Brown 1794A, which upsamples all incoming signals to 24 bit/192 kHz precision as standard. The Burr Brown chipset in the Tulip SRPP was chosen for sonic performance when properly implemented, rather than specifications in a resolution arms race. In a world obsessed by DSD and 32bit, 384kHz processing, this may seem like a controversial statement, but it is one that many digital designers subscribe to… even those who have ultimately chosen to go down a different path because of commercial demands. I can’t help but admire those who stick to their guns, especially when those guns sound this good.

BFA also suggests that you can tweak the balance by ‘tube-rolling’ – using different valves and that many seem to like the sound of classic new-old-stock devices – but even in standard guise this is an extremely good amplifier indeed. The Tulip SRPP sounds like that ideal combination of a valve preamplifier combined with a transistor power amplifier, and in this case a subtle, highly refined transistor amp. It doesn’t have the fist-clenched grip that you usually get with such high power ratings, but neither is it a lightweight. Rather it manages to deliver an evenly balanced sound with a deft, light touch; there is an open transparency to the mid and top that is all valve, but the midrange isn’t pushed to the fore leaving bass and treble lagging. I did most of the listening with Bowers & Wilkins 803 Diamonds and the Vivid B1 Decade. In both cases, the bass of the Tulip SRPP was always clear and extended, but with the Vivid loudspeaker, amp and speaker worked in true harmony. The match was a listener’s dream and a reviewer’s nightmare because no writing work gets done!

As with virtually all amplifiers, there seems to be a conscious choice between ‘heft’, and ‘texture’ on the designer’s part, and the BFA design is very much geared toward ‘texture’. The Tulip SRPP’s sound is ideal if you prefer ‘convincing music making’ to ‘internal organ reorganisation’. In other words, if you want to hear the bass notes that are being played, how they are phrased, and what the musician is doing, rather than being beaten about the head with a bass guitar, then BFA’s approach is the way forward.

I did a fair amount of listening via the USB input and got very respectable results, proving the optional DAC is no mere add on. James Blood Ulmer’s remarkable recording Live at the Bayerischer Hof [In+Out Records] sounded as cavernous as it can and had an effortless sense of power and presence; the big kick drum presented an easier, more musical sound that didn’t threaten to crunch my bones, but rather let the track flow. The result was one of the most musically engaging results I’ve had with the 803 Diamonds so far. No longer did this piece act as a mere test of dynamics; instead it returned to its original intention of musical entertainment. On Gregory Porter’s ‘No Love Dying’ [Liquid Spirit, Blue Note], the amount of midrange detail the Tulip SRPP provided meant compression used on the recording was obvious, but that detail also made it easy to enjoy the man’s spectacular voice, and all the heart and soul that he put down in the studio. 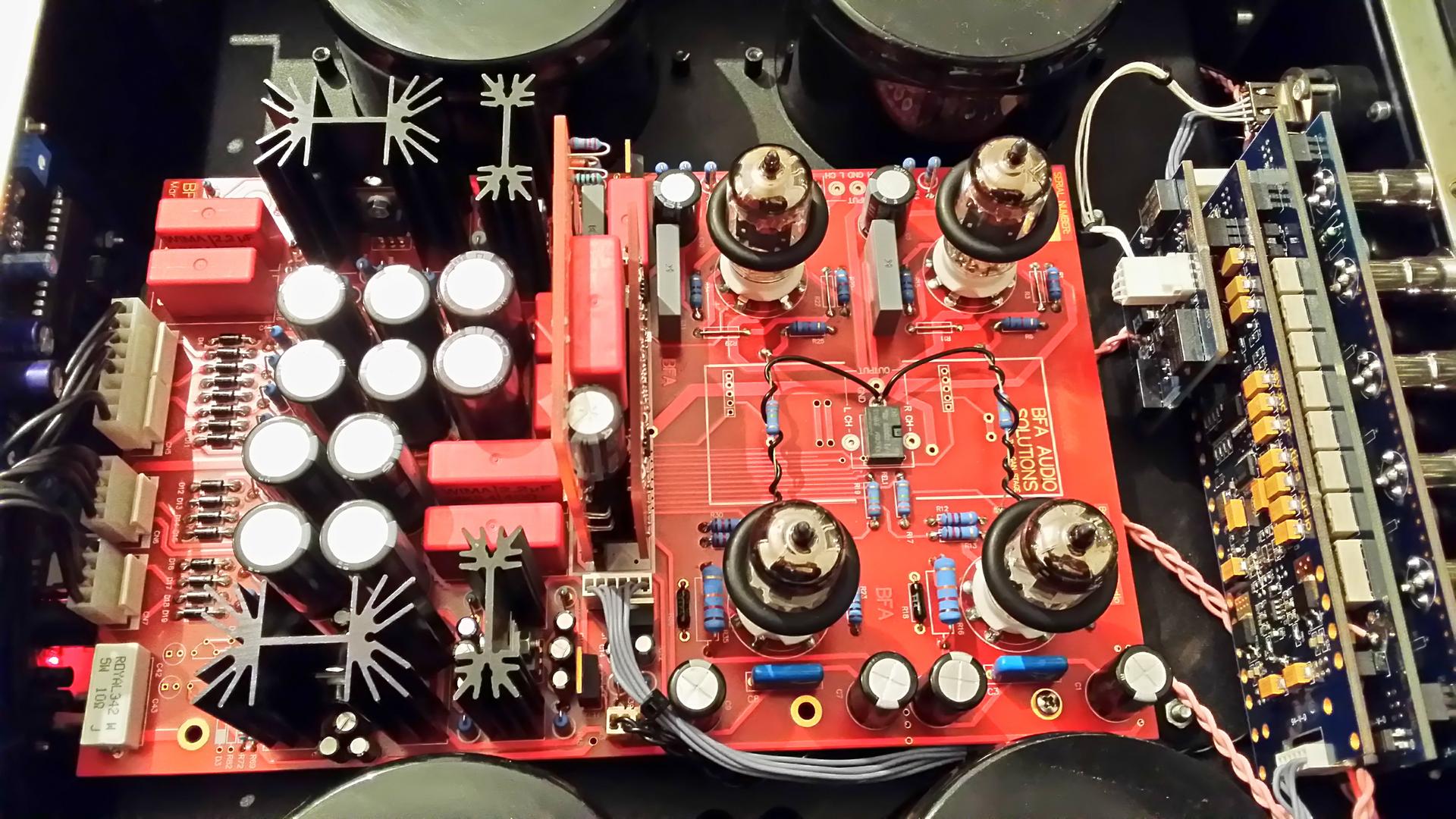 Lyricism is clearly a strong BFA trait, and it was clear on virtually everything I tried, from Stanley Clarke’s double bass on Forever [Concorde Records] – which sounded considerably more articulate than usual – to Patricia Barber’s ‘A Touch of Trash’ [Modern Cool, Premonition]. Here, the ‘hollow-state’ effect shone in the form of tremendous transparency to her voice, which had a powerful presence and reflected her precise delivery, against a backdrop of taut and tuneful bass, guitar, and drums.

The track ‘Alfa’ on Mop Mop’s Lunar Love [Agogo Records] consists of a gong-like instrument called a hang, with some artfully orchestrated drops of water, simply sounded more real. This reflects as much on the quality of the amplification, however: the effortless simplicity of the piece and the way the amp combined so much of the ambience and character of both ‘instruments’ into the room was uncanny. It was possible to appreciate the efforts that had gone into the analogue recording and the ability of the source to reveal those efforts. Next up was Tord Gustavsen’s latest release What Was Said [ECM]; here it was the female voice that blew me away. That voice was simultaneously fragile and ghostly, while having a power that did not rely on force in any form. The BFA made it clear that this is a better recording than I had initially thought.

The Beyond Frontiers Audio Tulip SRPP is a substantial amplifier that really does seem to combine valve and transistor technology in an extremely revealing, musical, and involving fashion. Its performance is such that, in combination with the Vivid B1 Decade, it turned in some of the most enjoyable and memorable musical experiences I’ve heard in a long time. The Tulip SRPP is strongly recommended.