Onto the “Rite of Spring”, Stravinsky’s shockingly modernist ballet score, Gergiev conducting the Kirov Opera orchestra  [Philips] really illustrates the two different modes of operation. The ultralinear does the fireworks brilliantly, a dazzling display of rhythms and textures, the triode the more lyrical as well as spacial elements of the score. In the famous second track, (Dances of the young girls) I’m happy to sacrifice (no pun intended) the velvety sweetness of triode for the greater blast and rhythmic tightness of ultra linear. They are both excellent, but it gives the user more choice and control.

Moving on to some jazz, Kenny Burrell and ‘Chitlins Con Carne’ [Midnight Blue, Blue Note], I’m loving the percussion in ultralinear mode; the palpably real sense of being in the room when a drum skin is whacked, really dynamic punchy playing, the tail of percussion and Saxophone notes organically trailing off. Moving over to triode mode, a little of that bass thwack that is there in ultralinear is lost. The sound is a little more organic, a wider soundstage, but I find myself missing that rhythmic immediacy that was there with ultra linear. Not night and day, but once the ear is tuned to it… it’s very noticeable. 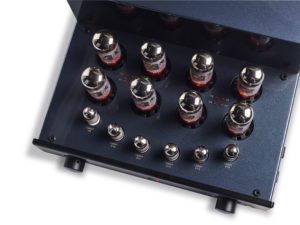 As an inveterate tweaker and an audiophile who is just plain curious, I relish the opportunity to swap the valves over to KT88’s. It again is rare to have an amplifier that can do EL34’s as well as KT88’s. I’ve always appreciated the differences, but never have been able to see them in the same place, as it were!

So armed with a set of Gold Lion KT88’s I made the swap, which thanks to the auto bias on the amplifier took less than three minutes.

Surprisingly, the differences weren’t quite as great as I’d have thought. There was a slight loss of the airiness that the EL34’s have, the pentode with KT88’s sounded a little closer to the ultralinear setting with EL34’s, more muscular but some of the spacial extravaganza curtailed. On ultralinear (KT88), the sound was big, but I was slightly bothered by a touch of nasality to the midrange, definitely the most ‘transistor’ of the four combinations. So for my money, an interesting and rather revelatory experiment, but give me the supplied EL34’s for the sweetness and depth, at a small cost of power.