This product – I hesitate to use the word amplifier because it’s a lot more than that – may have a name that reads like a compilation of dance floor anthems, but that name is indicative of its evolutionary nature. Pathos has been making Inpol amplifiers for a while now and they form at least half of the Italian company’s range. ‘Inpol’ relates to a hybrid power amplifier design with low power ECC88 triodes for the first stage and a single transistor device per channel (operated in Class A) for the output. This gives you reasonable amounts of Class A power without the need to dissipate the sort of heat produced by a pure tube design, or the additional expense of output transformers. The Inpol Remix Mk II is specified to deliver 25 Watts into an eight Ohm load – not terribly inspiring, but Class A always sounds more powerful than its specifications would suggest, thanks to producing mostly even order harmonic distortion nature under stress. In contrast, when Class A/B amps run out of steam, they tend to deliver odd-order harmonic distortion, which sounds hard and ugly. This Pathos is also a fully balanced design, with a double Inpol configured output stage as a result.

The Inpol Remix Mk II can be supplied as just an amplifier, however the optional HiDac EVO part not only adds digital inputs of all the usual varieties, but turns this distinctive looking design into a streamer as well. You get a totally cool looking, but somewhat abstruse, remote handset with the Pathos and that’s useful up to a point, but the control app gives you a whole lot more with only one caveat: the volume level at power up is 70 – 80 steps lower than can actually be heard with average sensitivity speakers. I had hoped that the app might provide some means of accelerating the process, but no. Luckily it remembers the level of inputs so long as power remains connected, and I guess that owners of high sensitivity speakers must enjoy having a half-decibel step volume control down to much lower levels than usual. That knob, inset into the front panel, doesn’t help either: it is actually a switch and it doesn’t rotate. Instead, it relates to the Burr Brown regulator chip that controls output level by adjusting bias rather than attenuating the signal as is usually the case; and this probably has a lot to do with the sound quality of the amp.

The Pathos app does however give you access to the streaming side of things, which is very useful, making this Pathos the equivalent in feature terms of a Naim Uniti in many respects. Except that Naim devices don’t have balanced in- and pre outputs, nor USB for that matter. The Inpol Remix MkII supports almost everything except Bluetooth. The streamer side of the equation is not an entirely standard implementation though. When I tried to access the music on my Melco N1A server, the Inpol Remix MkII could see the device but wasn’t able to scan its contents. Pathos explained that it’s not DLNA compliant as is usually the case but uses SAMBA, a Windows file sharing protocol. So if you use a Windows PC to populate your NAS the streamer should function. Listening was done with USB direct from the Melco and analogue from DACs connected to the same source.

I hadn’t looked at the power rating prior to hooking it up to the system so subsequently didn’t have expectations either way aside from those brought about by the presence of small valves. The sound has many typical characteristics of Class A, including limited power handling, but I was surprised to discover that the Inpol Remix MkII only has 25 Watts under the bonnet. These are clearly well backed up Watts and the Inpol circuitry is more than a gimmick; it actually turns 25 Watts into a practical amount of power. And not just for speakers that jump when they see a mouse, but with PMC Fact.8s, which have an average 89dB sensivity and a seemingly none too taxing impedance characteristic. Bass extension is greater with more powerful solid-state amps, but the presentation here makes for a very tuneful and tonally rich musical experience rather than one where you are searching for the next visceral experience.

We bass enthusiasts do enjoy having our internal organs vibrated it’s true, but trading that in for a bit of musical fluency makes a rather pleasant change. With the Pathos, for example, I enjoyed the whole of Feist’s ‘The Bad In Each Other’ [Metals Polydor], rather than the first few verses. The piece communicated on a different level, an emotional and intellectual rather than physical one. The kick drum still had power and weight, but this was kept in musical context partly by the amp’s lack of ultimate grip and partly by its coherence and ease of presentation.

Class A always seems to have a musical advantage in almost all its incarnations, but usually there’s a price to pay. With valves it’s very hard to get a wide bandwidth result because of limitations in power and output transformers. It can be done but it costs a lot. With transistors, though, there is a tendency toward softness/warmth that’s masks detail. But Pathos seems to have come up with a nice balance in this Inpol design; it could be more powerful and you really need a speaker with over 90dB sensitivity and an easy load, but if you can live without serious bass this integrated has an awful lot going for it. It is transparent right across the band rather than having an emphasis in the midrange, and it communicates the musical message with a fluency that’s inspiring.

I have been playing Kraftwerk’s live version of ‘Radioactivity’ [Minimum Maximum, EMI] of late, a track with a lot of low end on it and a manipulated, robotic voice that’s less than enthusiastic about nuclear power. The Pathos has sufficient power to give it the required fear factor alongside clarity that reveals all the words in the context of a substantial soundscape. You get the intensity of pieces like this without the bludgeoning that less than clean bass can create: it delivers the music before the sound. You can’t have one without the other, but this Pathos focuses your attention on the things that really matter, putting the tune before the tech. And, critically, it times really well but again doesn’t put this at the fore. Rather, you hear the way the musicians interact and equally, when there is just the one player or singer, their message has that much more nuance and depth. This works the same whether it’s Billy Gibbons’ guitar or Amandine Beyer’s violin; both are more fluent and their voices that much clearer than usual.

Tone colour is often cited as a quality of Class A valve amplifiers and you don’t get quite so much of it with this hybrid design, but that may be because the tonal balance is rather more even than with glass audio. This is not a lush sound, but neither is it dry; it treads a careful and impressively neutral line. I guess that different speakers would change this, as high sensitivity examples tend not to be as tonally even as their more demanding relatives.

Out of interest I tried the Inpol Remix MkII with Bowers & Wilkins 803 D3s, which gave me a bit more level per watt but most of it came from the mid and treble; the amp struggled to get the bass jumping as I had expected. But the space it opened up elsewhere was beguiling and truly was final frontier stuff. That alongside the precision of the detail resolution had me pinned to the chair for some time before the lack of bass extension became an issue. 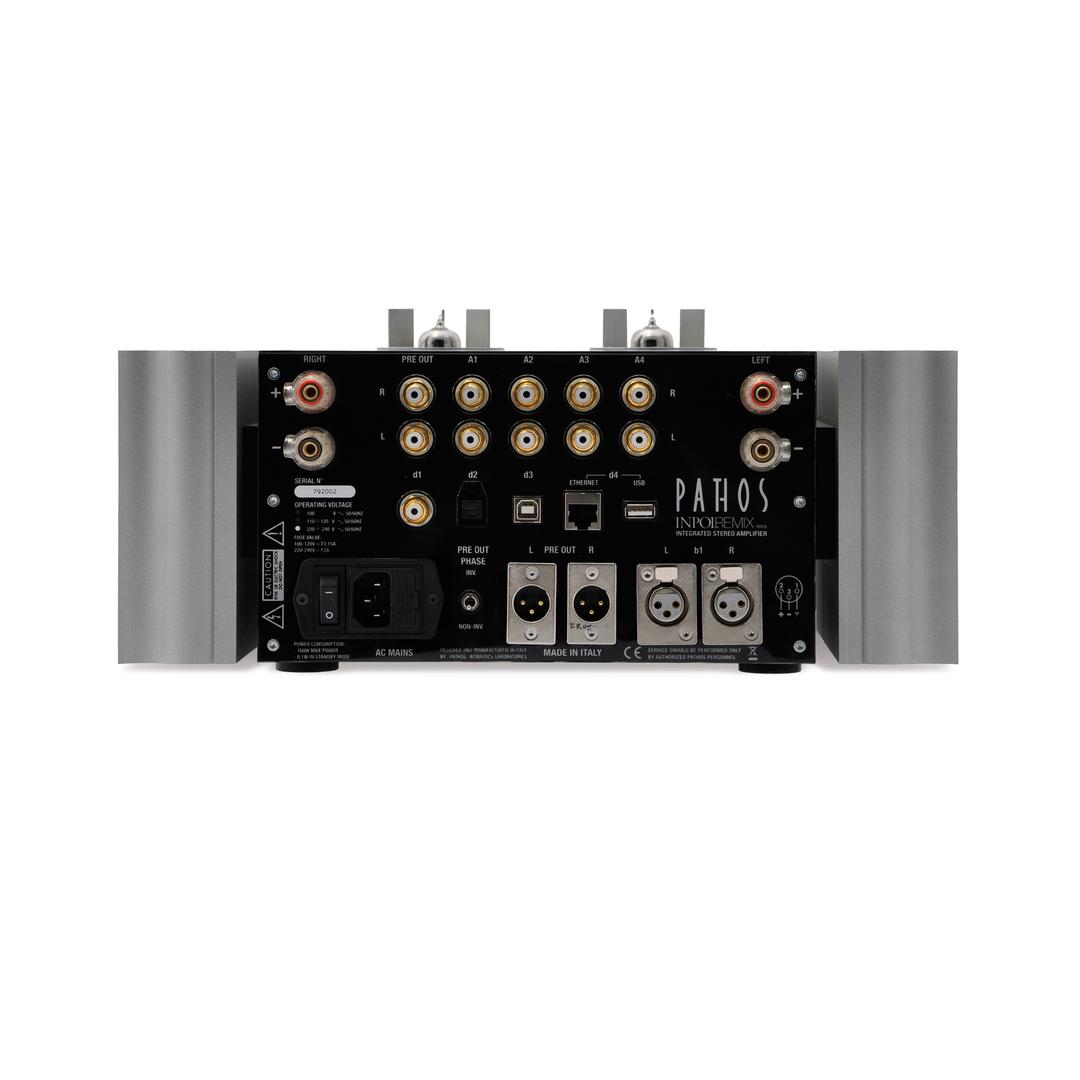 The Pathos Inpol Remix MkII is a feature rich – if idiosyncratic – piece of kit, but its sound is so enjoyable that it’s easy to forgive its foibles. The only one that caused problems is the somewhat limited nature of the streaming system with regard to peripheral hardware, but this was done for sound quality reasons, which is a good excuse in my book. And the sound is truly inspiring in a way that few all-in-one products can match. It makes everything fresh and interesting by using fine detail to draw you into the music, and that after all is the aim of the game.