Most pure analogue headphone amplifiers are simple affairs with a volume knob, some gain adjustments, and that’s it. And then there is the Manley Absolute Headphone Amplifier, which has so many controls and adjustments that even an experienced reviewer will probably need to glance at the owner’s manual at least once. Instead of a simple circuit path, the Manley delivers two, and instead of a single global feedback setting the Absolute offers a 10 dB range of adjustment. Intrigued? I know I was, and I continue to be amazed by the flexibility and sonic adjustability of the Manley Absolute Headphone Amplifier. Let’s take a look and see what absolute means when it comes to a headphone amplifier.

First off, in case you didn’t glean this from the photograph, the Manley is a valve-based device. Its valve complement includes two 12AX7 input valves and four 6AQ5A (EL 90) output valves. Its rear panel has two stereo pairs of single-ended RCA inputs. For outputs the Absolute supplies one single-ended RCA stereo pair, one 6.35mm stereo headphone jack, and one balanced 4-pin XLR headphone jack, which allows two different headphones and one line output to remain connected at all times. The rear panel also contains the AC mains connection, the Headphone Maximum Level adjustment threshold control, and an instruction panel that lists the controls and their functions. 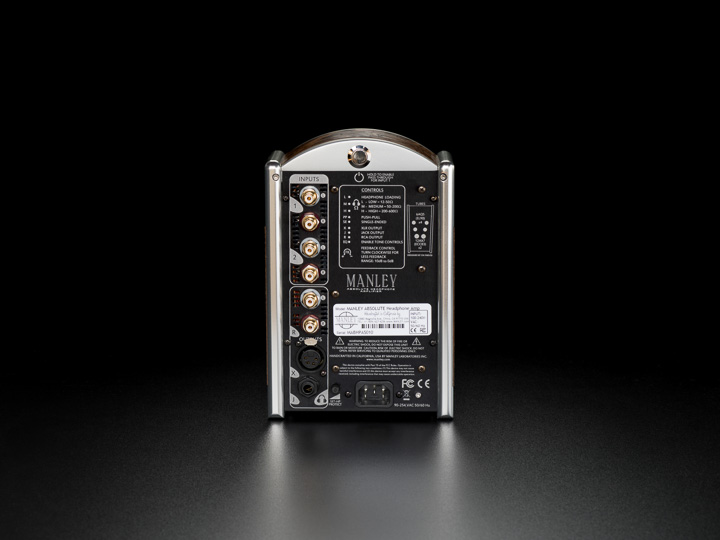 All the controls are on the front of the unit. These include a large volume control thumbwheel with LED level indicators directly above it. Directly to the left side of the volume control is the push-pull/single-ended selector, which changes the amplifier’s circuit topology. On the right side of the volume control is the mute button. On the top surface of the Absolute you will find two rows of controls, the lower row contains, from left to right, a three-way output impedance adjustment, output selector, input selector, mono/stereo switch, and an EQ on/off switch. The second row has a variable feedback adjustment knob, bass control, treble control, and balance control knobs. The Absolute comes with a dedicated RF remote control that has only two buttons: volume up and volume down.

Installing the Absolute was easy: simply connect a source to the input and a pair of headphones to the output; turn it on; select the correct input, output, and impedance from the front panel controls; and you’re done. I used a wide variety of headphones with the Absolute, but the Abyss Diana Phi and Focal Elegia spent the most time connected to the Absolute.

Because the Manley Absolute has a three-band impedance selector switch right on its front panel, matching impedances with any headphones in my collection was a push button away. Another neat feature was the ‘bypass’ function, which routes the signal directly from input to the pair of RCA output jacks. So, you can use the Absolute as an active line-level preamplifier or ‘put it to sleep,’ and let the signal go directly to the RCA output jacks.

Sonically the Manley Absolute can be anything from a push-pull amplifier with 0.16% THD to a single-ended amp with 1.0% THD. Also, you can add up to 10 dB of feedback. The sonic difference between the single-ended with no feedback and the push-pull with 10 dB of feedback is about as wide as the gap in opinions among audiophiles about the effects of cables on a system. But unlike polarized opinions, the Absolute offers you all the options in between its sonic extremes. Which setting did I find to be ‘the one?’ None, actually. Instead there was a range of settings that worked, depending on the music, the recording, and my own mood. 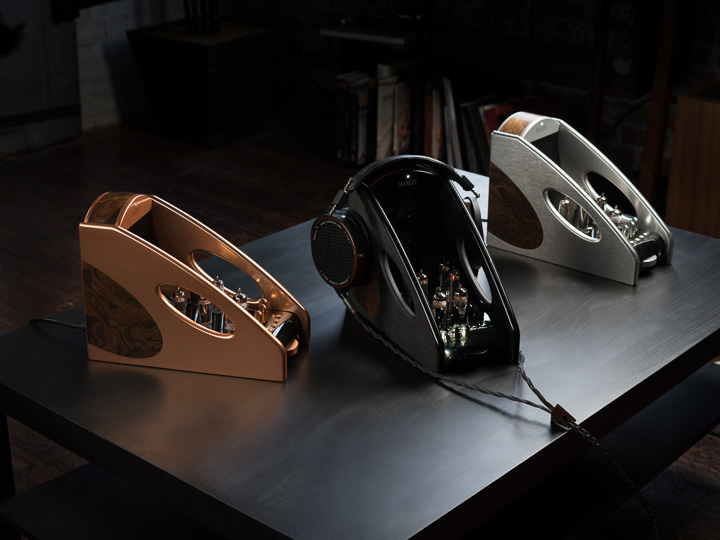 I haven’t mentioned the Absolute’s looks. It is a handsome piece of industrial design that is unlike any other headphone amplifier past or present. When you combine its unique looks with its abundance of features you have a headphone amplifier that lives up to its name. For me, the Manley Absolute Headphone Amplifier was an absolute joy to use, listen to, and adjust to my tastes. Try it out at your pocketbook’s peril…