The British firm iFi Audio is widely considered one of the premier purveyors of small-chassis, ultra-fidelity audio products. iFi’s new xCAN is a uniquely styled portable analogue headphone amplifier in its primary use, but also functions in a secondary use as a Bluetooth DAC for wireless streaming inputs. The xCAN is an inherently versatile product with the goal to allow users to confidently enhance sound quality of audio sources such as smartphones, tablets, TVs, or even high-end DAPs. When directly wired to external audio sources in its primary analogue use, the xCAN supports both 3.5mm TRS single-ended inputs and outputs as well as 2.5mm TRRS balanced inputs and outputs. In its secondary use as a Bluetooth DAC the xCAN sports a dedicated ESS Sabre DAC chip giving users 16-bit 44.1kHz CD-Quality Bluetooth via AAC, aptX, and aptX LL. 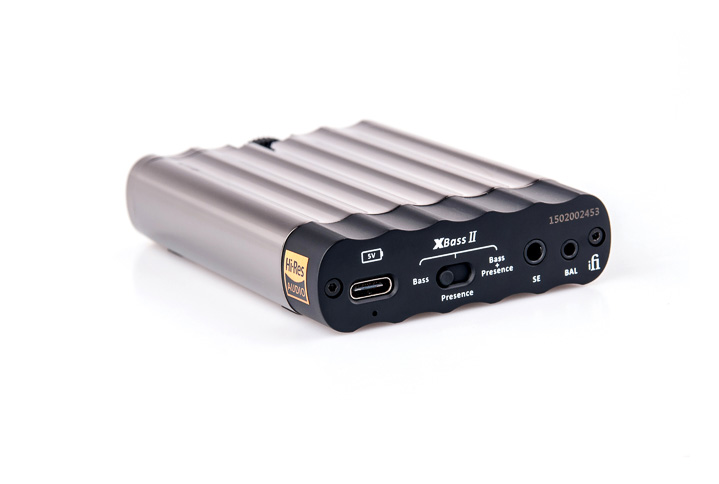 The user interface of the xCAN’s attractive, curvaceous chassis is relatively simple. At the front a user will find selection buttons for ifi’s 3D+Holographic and XBassII proprietary sound enhancement circuits and a stepped attenuator volume control surrounding an intuitive LED push button that changes colours to indicate operation modes. The back face of the xCAN provides a USB-C charging port and a three-position switch that enables the user to customise various parameters of the XBassII sound enhancement circuit.

Internally, the xCAN is built around iFi’s Cyberdrive circuit. Cyberdrive design creates a dual-mono headphone amplifier that provides a maximum of 1000mW of power per channel. This power should be sufficient to get the maximum performance out of any set of earphones, CIEMs, or full-size headphones you can throw at the device. iFi stresses that their Cyberdrive design embraces a ‘best of both worlds’ formula by offering digital control over an internally analogue amplification process. The signal attenuation conducted on the analogue side is digitally controlled in order to maximize a full dynamic range and preserve resolution even at very low playback levels. Cyberdrive also has the added benefit of being able to deliver incredible battery power control, with playing time said to last up to 18 hours per charge.

xCAN also features iFi’s important S-Balanced amplifier technology, which is found in its much more expensive Pro iCan big brother. Much has been written on the S-Balanced circuit (essentially a single-ended compatible balanced circuit) but succinctly put, the advantage of this technology lies in the fact that regardless of the user’s choice of headphones, he or she will get the sonic benefits of balanced amplification. Also notable as a tech inclusion is the addition of parent company Abingdon Music Research’s Global Master Timing memory buffer system, which makes the xCAN virtually immune to jitter.

In the several weeks I listened to the xCAN it continued to earn a space in my pocket owing to its simplicity and sonic effectiveness. The most exciting use I found was to use the xCAN with the various DAPs I had on hand from previous reviews. When connected with these DAPs, the xCAN rocketed playback quality to a stratospheric new level, delivering previously unheard degrees of precision, detail, accurately rendered spatial cues, and other pleasurable sonic enhancements across the board.

As an example, consider the organ bass notes in Felix Hell’s Symphony Concertante, Op. 81: 1. Allegro-Molto Moderato from Barber, Guilmant & Jongen: Orgel & Orchester [perc.pro]. With the aid of the xCAN the low range of the track seemed to be truly unearthed with a weighty, resonant, rock-solid bass performance not unlike what you would expect to hear when listening through a very high dollar desktop headphone amp. Disconnecting the xCAN after this experience revealed an auditory gulf that was painfully evident, so that I think most users would yearn for the added gravitas the xCAN provides.

In summary, while some might scratch their heads for a moment to wonder whether a product like the xCAN is necessary or beneficial, the proof is in the listening. To my ears, the xCAN delivers a sizeable sonic payoff beyond all proportion to its modest price.

Distributed in the UK by: Armour Home