I’ve been saving the best until last; the sound quality. Because it is the best part of this loudspeaker, even despite the healthy laundry list of high-grade technologies. Put simply, the M6 does everything you want of a loudspeaker and does it exceptionally well. This is one of those loudspeakers where your initial highly positive assessment (most of us tend to greet new top-end products with ‘wow!’ followed by a slower realisation of where the limits of that ‘wow!’ are placed) opens out to prove even more positive over time. For example, you might be drawn to the impressive dynamic range of the M6 at first, and the more you listen, the more you get hear both the expressiveness, the precision and the impact of that dynamic range, and the way it resolves up to the largest scale orchestral pieces you can find, and down to the smallest microdynamic details that are the key to tricking you into thinking you are there in the same room as the musicians.

I’ve chosen ‘dynamic range’ here because it’s one of the elements in music that so impress people at first, but I could have just as easily pointed to ‘imagery’ or ‘soundstaging’ or ‘coherence’ or any other aspect of the musical presentation that will grab your attention first and foremost. Because, regardless, after that initial attention-grab, you get a wider picture of that aspect of musical performance, and it’s all good, all the way down. Then you begin to join the dots, adding in those other things that grab your attention (or the attention of others) and do the same again. Pretty soon, you draw up a picture of a loudspeaker that doesn’t have holes in its presentation and doesn’t pick holes in the music; it just plays it with absolute fidelity… which is kinda important in an industry that attempts to create ‘high fidelity’ sound.

However, this does make a bit of a mockery of the usual “I listened to a specific track through this loudspeaker to highlight the loudspeaker’s performance in a specific manner” because every test recording is a test the M6 passes with ease. In essence, the usual test-track listing just becomes a collection of music you played during your most recent listening session. Sure, you can try to shoehorn that listening session as justification for equipment analysis, but that’s not the point and not the point of the M6. The loudspeaker invites you to re-evaluate your recordings and acquire more recordings in the process. You don’t just play music, you explore music through the Magico M6. 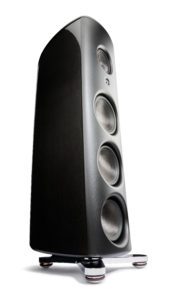 However, all of this fails to describe precisely how the M6 sounds, but in part that’s because it has less of an intrinsic ‘sound’ than most loudspeakers. It treads lightly through the music, leaving very slight footprints for so heavyweight a loudspeaker. In that respect, it’s like a monitor loudspeaker, but closer to an idealistic form of a monitor than most true monitors. It’s extraordinarily accurate and detailed throughout, almost to the point of having a pathological hatred of distortion. Making this one of the most ‘least’ loudspeakers (in all the good ways) you can hear at this time.