Even by Magico’s own big-boned approach to high-end audio, the M6 sets a high bar. While there is an M9 flagship that eclipses even this model, the M6 is by most reckoning a loudspeaker of the highest standard, and a cost-no-object interpretation of what goes into making a floorstanding loudspeaker.

Magico’s M6 is ostensibly a three-way, five driver design in a 1cm thick six-sided carbon fibre monocoque, which is made yet more rigid by thick aerospace-grade aluminium front and rear baffles, top plate and inner baffle, all tensioned with aluminium rods. The drivers feature a diamond-coated beryllium dome (in the tweeter) and graphene in the midrange and bass units. If that sounds familiar, it’s not too dissimilar from Magico’s 2014 limited run ‘thank you’ M-Project loudspeaker. The M-Project, built to celebrate Magico’s ten years as a speaker maker and sold to its most loyal followers, both set a high performance bar for subsequent Magico loudspeakers to achieve, but also was a launch-pad, instigating design concepts and criteria that the company has used to this day. The M6 is very much a child of the M-Project. 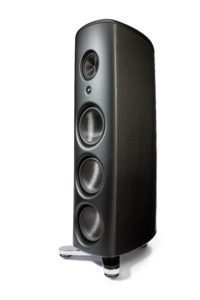 One of the first big outcomes of the M-Project was a radical change to the way big-hitter Magicos looked, but for reasons that were predicated on sonics as much as aesthetics. The slab-sided black aluminium monolith was gone, and the aluminium matrix frame that helped define projects like the Q-series (which still exists in the shape of the Q7 and Q Sub) was replaced by the aforementioned carbon monocoque. Perhaps the best way of looking at this sea-change is it requires a shift in analogies; the previous matrix frame worked best with the inevitable motoring analogy (reminding you of the space-frames of classic 1960s F1 racing cars) where the designs that came from the M-Project require higher-tolerance aerospace analogies (think the monocoque build of a modern F35 fighters)  One of the results of this was a loudspeaker that was both more domestically acceptable and integrated in room better than before. Better performance from the enclosure was the outcome; a better-looking enclosure was the happy by-product.

As opposed to the normal statement piece loudspeakers at this level, where the sheer size of the loudspeaker physically dominates the room, the Magico M6 is positively understated. It’s still a big loudspeaker, both in size and weight, but the M6 still looks like a floorstanding loudspeaker and not an exercise in mechanical engineering or, as in the case of the M9, a house Dalek. However, let’s not back away from the fact a loudspeaker that stands 143cm tall, weighs in at 177kg, and is finished in contrasting shades of anodised matt black aluminium and a shinier – but still black – sculpted carbon fibre monocoque still cuts an imposing figure in a listening room. But it’s a ‘loudspeaker, but bigger’ rather than ‘an exploded diagram of what makes up a loudspeaker’ and that will make the M6 a more attractive prospect in many high-end listening rooms.