In a very real way, the M6’s more room-chummy appeal is a recognition of how the audio world has changed recently. The age of the ‘man cave’ seems to be coming to an end, as the next generation of well-heeled audiophiles move inexorably eastwards. The space and aesthetic concerns of a market that supplied wealthy dentists in the mid-West of America are increasingly being challenged by the demands of merchant bankers and high-ranking executives in places like Singapore. Where the M6 scores highly is it works well in both settings, and those in between, without compromise or sacrifice. Sure, there will be those who think no loudspeaker is complete unless it looks like a late 19th Century wardrobe, and there will be those who think the M6 is too understated, but in the most part I think it’s got the balance just about right, for both existing and newly minted music lovers. 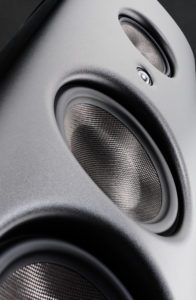 However, the advantage to taking a more modular approach to loudspeaker design at this level is a greater degree of installation flexibility. Loudspeakers that allow the installer to fine-tune the baffle alignment and then lock that alignment in place do afford the user a greater degree of control over the loudspeaker design’s interaction with the room. The counter to this is that it also allows a greater degree of messing that interaction up, and unless the installer is a 10th degree black belt in audio installation, that adjustable alignment has the potential for causing more harm than good. The M6, by way of contrast, still places demands on installation, but these are more universally-understood installation concerns such as placement of speaker and listening position, room treatment and eventual fine tuning of all three. That’s not to say the M6 should just be ‘plonked’ down in the room, but it does mean should your installer be more ‘piano mover’ than ‘audio ninja’ you can get still good performance.

We’ve concentrated on the enclosure because it’s such a major step-change for Magico, and Magico itself also focuses on the ‘box’ a lot in its literature, but let’s not forget the other key links in the chain. Magico’s own 2.8cm diamond-coated beryllium dome tweeter, partnered with a 15.2cm midrange cone and three 26.7cm bass cone (all using Magico’s latest XG Nanographine cone material) are fed using the company’s own ‘Elliptical Symmetry’ crossover. The move to XG Nanographine does for Magico’s drivers what the monocoque chassis does for the enclosure; less weight, more stiffness (the cone is 30% lighter and three-times stiffer than its predecessor). Meanwhile the crossover uses high-grade components throughout (you’d expect nothing less at this price, of course, but it’s perhaps reassuring to know there are Mundorf components in the crossover that cost as much as a pretty good watch in and of themselves). Finally, the three point base incorporates built-in MPOD constrained layer damping floor-coupling pods.

All of which makes the M6 ‘the friendly flagship’ loudspeaker. It’s a more sensitive and easier to drive loudspeaker than some of its peers, meaning that there is more flexibility in up-stream electronics. While not a true ‘platform agnostic’ loudspeaker (I imagine most M6 will be partnered with high-grade solid-state electronics), the design is far more comfortable with lower-powered valve amplification than previous designs from the Magico stable.