If there’s one thing all audio people think is ‘a done deal’, it’s the sealed-box two-way standmount loudspeaker. We’ve been there and done that, whether it was an LS3/5a, a Linn Kan, or any one of dozens of models; some well-loved, some not so. The sealed-box two-way is a known quantity, and we all know its strengths and weaknesses.

The Magico A1 is a two-way sealed-box stand-mount loudspeaker, bearing more than a close family resemblance to the A3 floorstander we tested in issue 172. And as such, you could be forgiven for just reading that review and truncating any observations about the lower end. You’d be part right, but mostly wrong, because the A1 does a lot more.

Even so, the A1 still takes a lot of its design cues from the A3. It has a single 165mm Graphene Nano-Tec midrange unit (used in this case as a mid/woofer), and the distinctive 28mm Beryllium coated diamond tweeter. We went over just how hard it is to make Beryllium and diamond like one another in that review of the A3, and it still holds today. 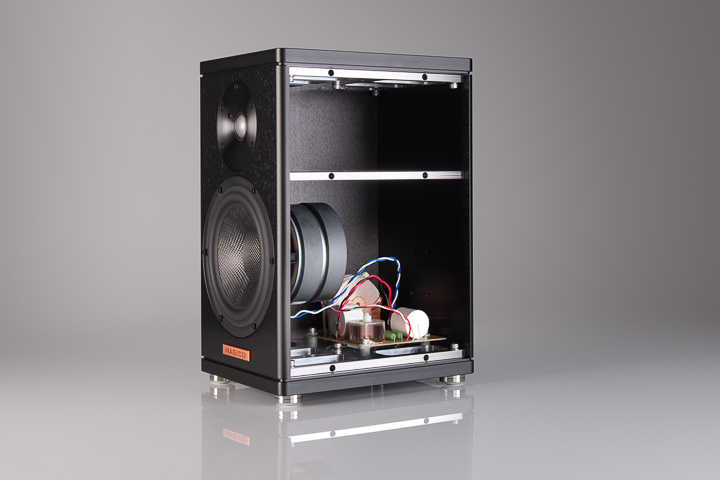 Like many of its stablemates, the A1 cabinet is made of sheets of aluminium. Beneath the surface there beats a heart of pure Magico, too. And like its stablemates, it uses 6061 T6 aircraft-grade aluminium enclosure (like Big Boy Magico models) includes a complex series of internal polished aluminium bracing sections, designed to add mass and stiffness while lowering internal resonance. This has similarities with the internal structure of loudspeakers in Magico’s considerably more expensive S, M, and Q series. To make the A1 both attainably priced and not weigh so much it destroys the stand on which it rests, this is just internal bracing (essentially the plates of the outside of the A1 here form the enclosure itself, where in bigger Magicos they are a heavy skin on an aluminium skeleton).

The 85dB sensitivity figure coupled with a four-ohm impedance figure actually holds, with no nasty little phase angle impedance dips that would rip the MOSFETs from many good amplifiers. This makes the loudspeaker slightly more demanding than its tower brother, and that means both quality and quantity in amplification. But not to insane levels; Magico includes some more real-world amplifiers in its design criteria and listening tests for its A-series loudspeakers, knowing that there is less of a guarantee that a loudspeaker at this price point is going to wind up the cheapest part of the system. In particular, the company has been known to use Hegel’s integrated amplifiers in the design process. While you can raise the performance level of the electronics several orders of magnitude above that of the Hegel models (and if you can, you should!), the Magico A1 is not so amp-fussy as to be allergic to audio electronics’ nursery slopes.

A caveat to that, however, is where the A3 was equally undemanding of placement, that’s not the case with the A1. The loudspeaker does need to be positioned carefully in the room, and used with appropriately heavy loudspeaker stands. If not, it can sound a little bass light, and even a touch bland sounding. At its worst, if you hear a sound that is light in the bass, bland-sounding and divorces bass and treble, the A1 has been set-up by someone who might be best sticking to their day job. Or rather, it has been deliberately set-up to sound bad by someone wanting to sell something else! That all being said, the dial-in process isn’t overtly obsessive and the sound snaps into place over the course of a few inches, rather than a sweet-spot that falls apart if you move it one electron layer to the left. Particular care should be taken with the precision of the rear- and side-wall placement, and toe-in. Run-in is harder to determine because the review sample came with some miles on the clock.

In fact, if anything, what the Magico A1 shows is that, with a few notable exceptions, the UK stand-mount market has been asleep at the switch! Granted, many of our best and best-loved stand-mounts are less than a quarter of the price of the A1, but the level of uncompromising design that is put into honing and perfecting the sealed-box two-way from Magico effectively completes a project started – and more or less abandoned – by the BBC in the 1960s. The A1 is no BBC LS3/5a clone… it’s what the BBC LS3/5a might have become had it not become frozen in time. 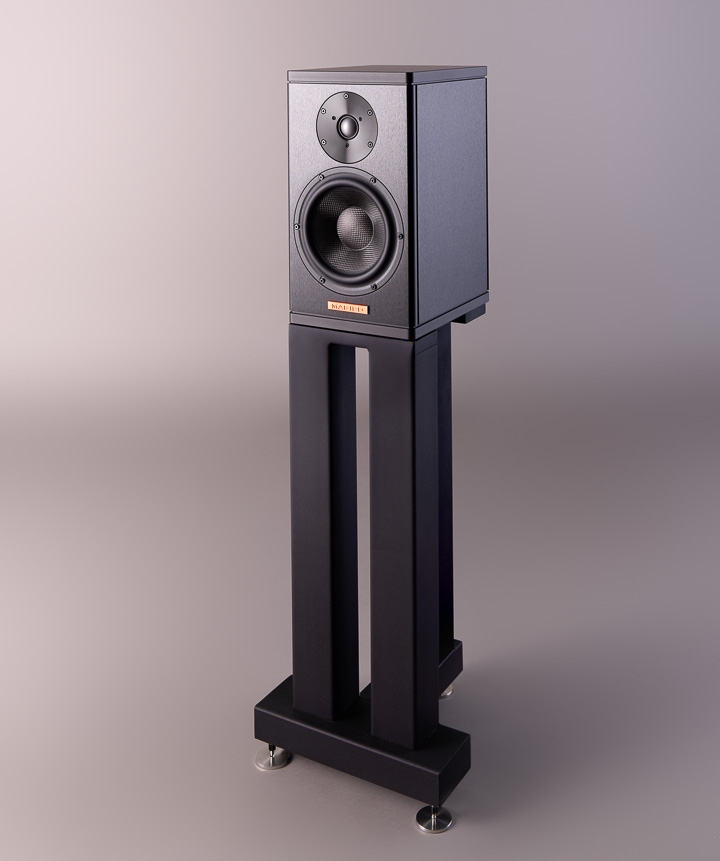 This sounds almost disrespectful to both Magico and the LS3/5a, but if anything, it’s complementing both. The BBC design set standards for neutrality and speech clarity in its day, but that day was 50 years ago and the A1 is one of the very few products that takes that inherent neutrality as a starting place and builds from there.

As a consequence, the loudspeaker is one of the most uncompromisingly uncoloured stand-mounts you can find, yet without the dynamic foreshortening that high-enders equate to small cabinet designs. Yes, it rolls off at 35Hz, but that is an honest roll-off rather than an exaggerated tale-wagging exercise. It’s the difference between bass that is ‘taut’, ‘dry’ and ‘honest’. And bass that is ‘impressive’ yet ultimately ‘flubby’, ‘flaccid’ and ‘indistinct’. This means it aces the ‘Trentemøller Test’; playing ‘Chameleon’ from Trentmøller’s The Last Resort [Poker Flat] results in bass notes that are clean and precise; other similarly-sized loudspeakers make those bass notes sound deeper, but on closer investigation they come with a lot of overhang, and that slows the sound down.

Long after you have grown accustomed to its bass (cue Rex Harrison), it’s the clarity and detail that really hit home. Like most Magicos, the A1 is a resolution monster. If it’s on the recording, it’s presented for you through the loudspeakers without grace or favour. This is something that people who haven’t experienced it think is something like over-stimulation of the senses. Another way of looking at this much detail is “where have you been all my audio life?”, and that usually comes from those who have heard what this much information can do for their audio pleasure. Take ‘Tearjerker’ from Jarvis Cocker and Chilly Gonzales’s Room 29 [DG]. This simple recording (just voice and piano recorded in a hotel suite) can be played on any system and it sounds good, but through the A1, it’s truly mesmerising. The level of information puts you not just in the room, but almost between the two musicians, and the bittersweet (but mostly ‘bitter’) lyrics hit home. It’s the antithesis of ‘easy listening’ but leaves you hungry for more. More, in this case being everything from a string quartet playing Schoenberg to all of Joy Division’s Closer album [Factory]. Such is the power of the A1, it took some time to shake off the sads.

Naturally, such an inherently informative loudspeaker gives good dynamic range and soundstaging, but these elements are more ‘there’ than ‘directly noticeable’. Some systems are so dynamic they can make a piccolo sound like an atom bomb, but the Magico has more restraint. Not too much restraint though. It’s like the dynamic equivalent of the Han Solo ‘fly casual’ quote. Ultimately, there are few things the Magico A1 doesn’t do really well, and most of those are more to do with not trying to bend the laws of physics with respect to cabinet size. In other words, what it doesn’t do is be dishonest with the music. 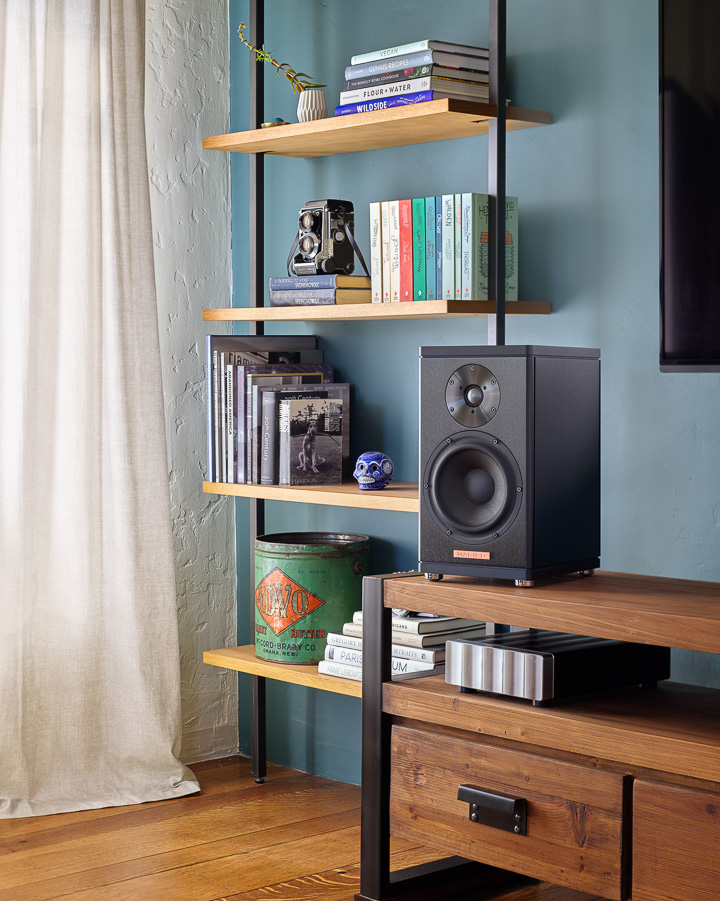 For the last 30 or more years, stand-mounts speakers have tended not sell as well as their floorstanding counterparts. The Magico A1 deserves to be one of the rare exceptions to that rule. If you want uncompromising sound in a room compromised by its own size, the A1 is one of the few to really meet those demands.