JH Audio is led by its founder and chief technologist Jerry Harvey, and the firm specialises in one thing: namely, creating some of the world’s finest custom-fit in-ear monitors and universal-fit earphones. Harvey began his career at Westone, went on to co-found Ultimate Ears, and now leads a company that has taken his initials as part of its name. JH Audio has worked to provide very high-quality monitoring services and products in support of working musicians on tour, so it comes as no surprise that JH Audio’s client list reads like a ‘Who’s Who’ of past, present, and future stars of pop music.

At CanJam SoCal 2017, JH Audio showed an all-new CIEM design called the Lola, which is part of JH Audio’s top-tier Siren-series range. The Siren models are named for women who figure prominently in the titles of classic rock songs (e.g., Roxanne, Layla, and now Lola). Commenting on the new Lola (admittedly during his tenure at JH Audio), personal audio maven Andy Regan unequivocally stated, “I think it’s the best thing Jerry has ever done.” Given the high regard Regan has for Harvey’s earlier designs, this statement was roughly the equivalent of hearing a Renaissance-era critic say, “da Vinci just painted something better than the Mona Lisa.” 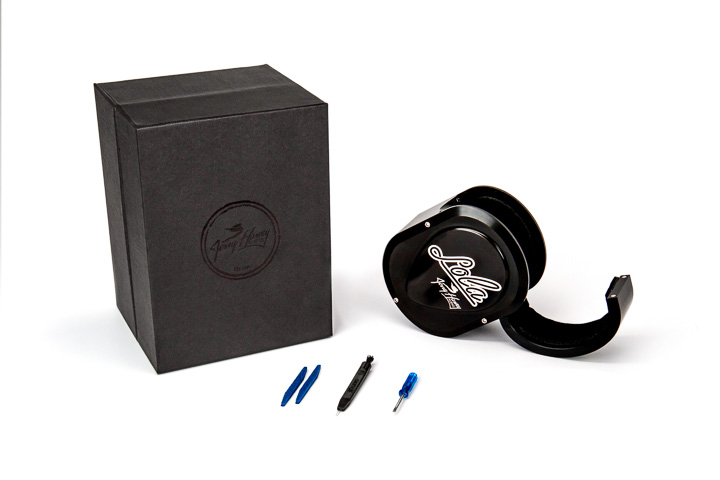 Even so, company presidents have been known to overstate performance claims for their firm’s products. Therefore, doing my best to exercise proper journalistic restraint and reserve, I nodded politely and asked to try the new model to experience its sound for myself. However, about 30 seconds into the first track I played through the Lola’s I found my critical reserve melting into admiration and then outright enthusiasm. Regan was right; the Lola might well be one of the best things Jerry Harvey has ever created, which is saying a mouthful.

Up to this point, Harvey’s most technically complicated CIEMs have been the Layla and Roxanne models, both of which use sets of 12 balanced armature-type drivers per earpiece. With the Lola, however, Harvey has broken new ground with his first-ever hybrid design, which uses a combination of balanced armature and dynamic drivers.

Frankly, such hybrid designs are not an entirely new idea and when they have appeared in the past designers have typically used dynamic drivers as miniature woofers, while using balanced armature drivers for their superior lightness (and thus speed) to handle the midrange and high frequencies. But, for the three-way Lola, Jerry Harvey had a very different idea, which was to use a pair of light, fast, small-diameter dynamic drivers as a midrange array.

Like all upper-tier JH Audio CIEMs, the Lola uses the firm’s signature Freqphase technology and triple stainless steel bore tubes to deliver flat frequency and phase response. It also provides special user-replaceable signal cables featuring an in-line variable bass attenuation module with a pair of tiny, recessed adjustment screws that give a +0dB/-15dB range of adjustment (bass levels can be set independently for the left and right channels). The Lola Owner’s Guide advises that adjusting the bass controls to “the 12 o’clock position sets the bass output to the lowest setting,” but advises that most listeners will prefer somewhat higher bass settings.

For my listening tests, I drove the Lola’s with two high-quality digital audio players (a Questyle QP1R and Lotoo PAW Gold) and with an iFi Audio Micro iDSD Black Label portable headphone amp/DAC fed from a Windows/jRiver/Lenovo-based music server. Material included a mix of standard and high res PCM and DSD music files. I also had on hand for comparison purposes top-tier in-ear models from Noble Audio and HiFiMAN. Here’s what my listening tests revealed.

First and foremost, the Lola’s sound is defined by its wonderfully nuanced, well-balanced, and smooth yet highly articulate midrange response—response that I attribute to the Lola’s new dual dynamic midrange driver array. There’s a certain je ne sais quoi about these midrange drivers that allows them to sound vibrant, alive, engaging, and highly expressive, yet at the same time to sound neutrally balanced with almost complete freedom from overt colourations.

To hear these qualities in action, try listening to vocalist Anne Bisson’s cover of Pink Floyd’s ‘Us and Them’ from her Portraits & Perfumes album [Camilio Records, 16/44.1]. As Bisson sings she does a masterful job of suggesting varying shades of meaning and emotion through subtle shifts in inflection and dynamic attack—shifts that the Lola’s reproduce with exceptional faithfulness and telling emotional effects. But what is more, the song juxtaposes seemingly innocent, almost circus band-like instrumentation against much darker (and at times even sinister) vocal themes. The Lola does a brilliant job with these sorts of ironic contrasts, most notably when the band’s dynamics ramp up for the song’s chorus, while Bisson sings (with a hint of the overblown delivery of a carnival barker), “Listen son/Said the man with the gun/There’s room for you inside.” 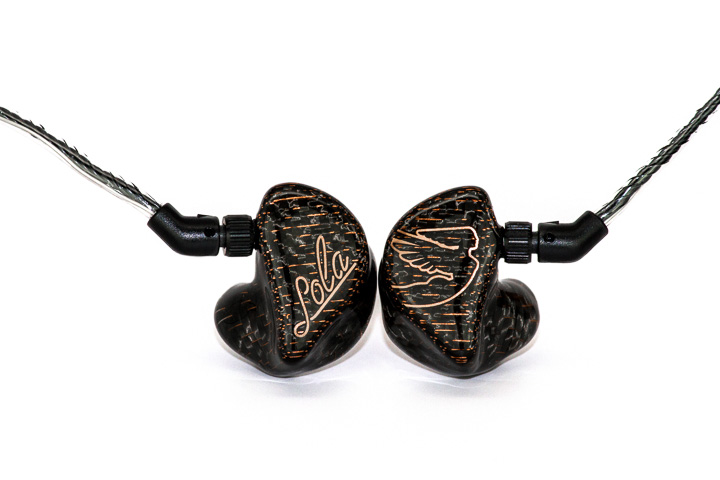 Let me emphasize that there’s much more to the Lola than simple midrange excellence, though it delivers that quality in spades. Indeed, the Lola’s high frequency response offers exemplary extension and articulation, while its bass response is powerful, deeply extended, and offers first-rate pitch definition. JH Audio’s signature variable bass control is a blessing too, in that it allows users to adjust bass levels to suit their personal tastes and perceptions of musical realism or to help overcome whatever low-frequency noise might be present in the listening environment.

What is particularly striking is the manner in which the Lola’s three groups of drivers integrate in a time-aligned and delightfully phase-coherent way. This isn’t just a matter of disparate drivers managing to ‘sing’ with one common voice, although the Lola’s drivers certainly do that, but more a matter of the drivers joining forces to create consistently broad, spacious sound stages that allow the musical presentation to extend well beyond the confines of the listener’s head. Stated simply, the Lola captures the ambient and spatial cues found in good recordings in an uncommonly vivid and believable way.

To explore the Lola’s remarkable spatial capabilities, try the track ‘Nublado’ from Será Una Noche’s eponymous album [MA Recordings, 16/44.1], which presents a deep, profoundly beguiling, and almost dream-like Uruguayan-style candombe performed by a six-member ensemble (candombe is both a musical and dance form of African origins that is similar in many respects to a tango). The track starts with very simple acoustic instrumentation, plainly captured in a reverberant natural acoustic space, and then builds both in complexity and intensity as the song unfolds. The Lola’s do an excellent job of conveying a sense of real instruments performing within a real space (the Lola’s detailed and dynamically agile presentation really helps here), so that listeners cannot help but feel as if they’ve been transported from their listening chair to the room where the recording was made.

Caveats? I really didn’t find any apart from the fact that the Lola is somewhat lower in sensitivity (105dB) and impedance (16 Ohms) than other top-tier CIEMs. In practice this means that, while the Lola’s can be driven directly from smartphones or tablets, they typically sound best when driven by high-performance portable digital audio players or headphone amp/DACs. Otherwise, the Lola’s proved a joy to use. 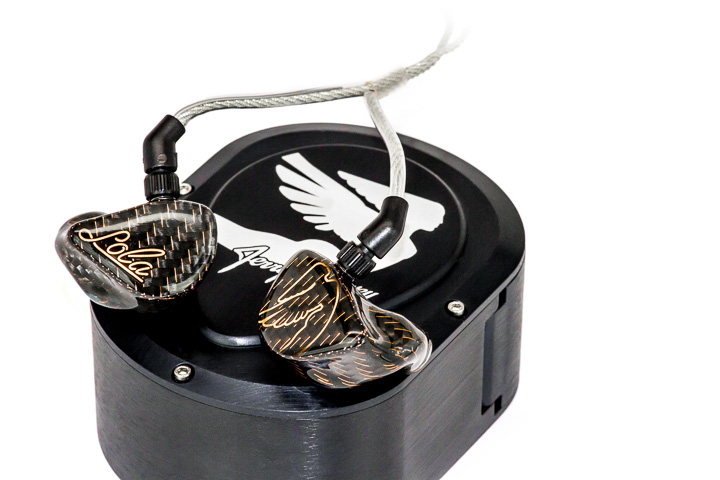 JH Audio’s Lola is a world-class CIEM, pure and simple, and I can count on the fingers of one hand the other in-ear transducers that I think are legitimate competitors. For this reason, I urge listeners in the market for top-class CIEMs to visit nearby dealers (or a good local headphone/earphone-specific audio show) to hear for themselves what the Lola can do.

Price: Starting at $1,745, with pricing dependent upon the levels and types of earpiece customisation desired.