Most AC circuits are reactive – they produce a reaction either from the power drawn or the circuit itself. Put simply, they are not pure resistors and behave like a capacitance and resistance or an inductance and resistance. In an ideal world, the only allowable impediment is resistance and ideally this needs to be extremely low. This is something of a dilemma, do you want high transient power, or do you want heavy filtration? It’s possible to have both, but to do so one must have components of the very highest quality, which are designed specifically for purpose with the correct architecture. This is extremely complex and does not exist outside the world of specialist power engineering.

In the V5 Aquarius, IsoTek has to tow a careful path, too big a series of changes, and the company risks losing the kind of people who buy the product. Too few and it’s a ‘meh!’ launch. IsoTek – like any company – also needs to keep abreast of the world outside of its factory gates; what its competitors are doing, what systems people are using its components with today – and potentially more importantly, those who aren’t investing in IsoTek’s products… and why.

IsoTek has been doing just that in the run-up to the release of the V5 Aquarius. This seems to be more than just another product launch; it’s more a labour of love. According to IsoTek, just getting the industrial design right took almost 12 months of rigorous quality control checks to maintain consistency of fabrication. The internal design has also followed the same passionate pursuit, with ongoing critical listening tests, a considerable amount of measurement and a full shake-down of the design in every conceivable way.

The only way to really evaluate that is a spot of side-by-side comparison. I know the EVO3 Aquarius well (I knew the GII Mini Sub it replaced quite well too), and know both its strengths and its weaknesses. And the first problem for the V5 Aquarius was the EVO3 was mostly strengths and not many weaknesses! To build a better EVO3 Aquarius was enough of a daunting prospect that it took IsoTek more than a dozen years to make a viable replacement that is claimed to improve on the EVO3. But, deep down, does it? 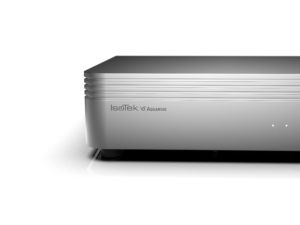 Oh, hell yes! It’s little wonder the EVO3 Aquarius proves popular with the Naim fraternity, because it has really good musical timing (more accurately, it gets out of the way enough to let the system play good timing), but the V5 Aquarius makes the EVO3 sound like it’s on strong antipsychotics. OK, so there’s no drooling or slurred speech involved, but where the EVO3 delivers good rhythm, the V5 is peppy, immediate and upbeat. It simply leaves the EVO3 behind. Given the EVO3 is already considered one of the most fast reacting power conditioners, and that the V5 leaves it almost for dead, this new chassis (and what it contains inside) is something of a revelation.

And the V5 reveals itself when playing some swampy country rock, such as Larry Jon Wilson’s ‘Ohoopie River Bottomland’ [Heartworn Highways, Light In The Attic]. This is a great and mostly unsullied recording, with an infectious beat but one that’s prone to getting lost in the ensemble. Any sense of reticence on the part of the power conditioner makes this track sound almost tired in the middle eight (the key change is so relaxed, you barely notice it until after it happens). Here, everything is just perfectly balanced and pitched. The EVO3 reacts fast to this kind of music, faster than many in fact, but the V5 just reacts faster.