In the oft-parochial world of audio, some good brands can go almost unnoticed. So it is with Gold Note: the Italian company commands a strong reputation in many parts of the world as a ‘stem to stern’ (or ‘soup to nuts’) brand, as it has products in every category from source components, to amps, cables, and tables, right through to loudspeakers and even record cleaning products. And yet, in other regions the brand remains almost unknown.

However, within the plethora of products Gold Note produces, there’s clearly some deeper emotional investment in the analogue front end. Where other components in the line have catchy titles like ‘PA-1175’ and ‘A-3 XO’, the turntables and cartridges are named, which is why we are looking at the Giglio turntable and Donatello Red cartridge. OK, so the arm has the more prosaic name of B-5.1, but even in the nomenclature, it’s clear vinyl is more of a labour of love. The fact Gold Note makes OEM turntables for many brands (the new Bryston turntable, for example) and has its own line in 180g LPs adds some credence to that statement. This is Gold Note at core. 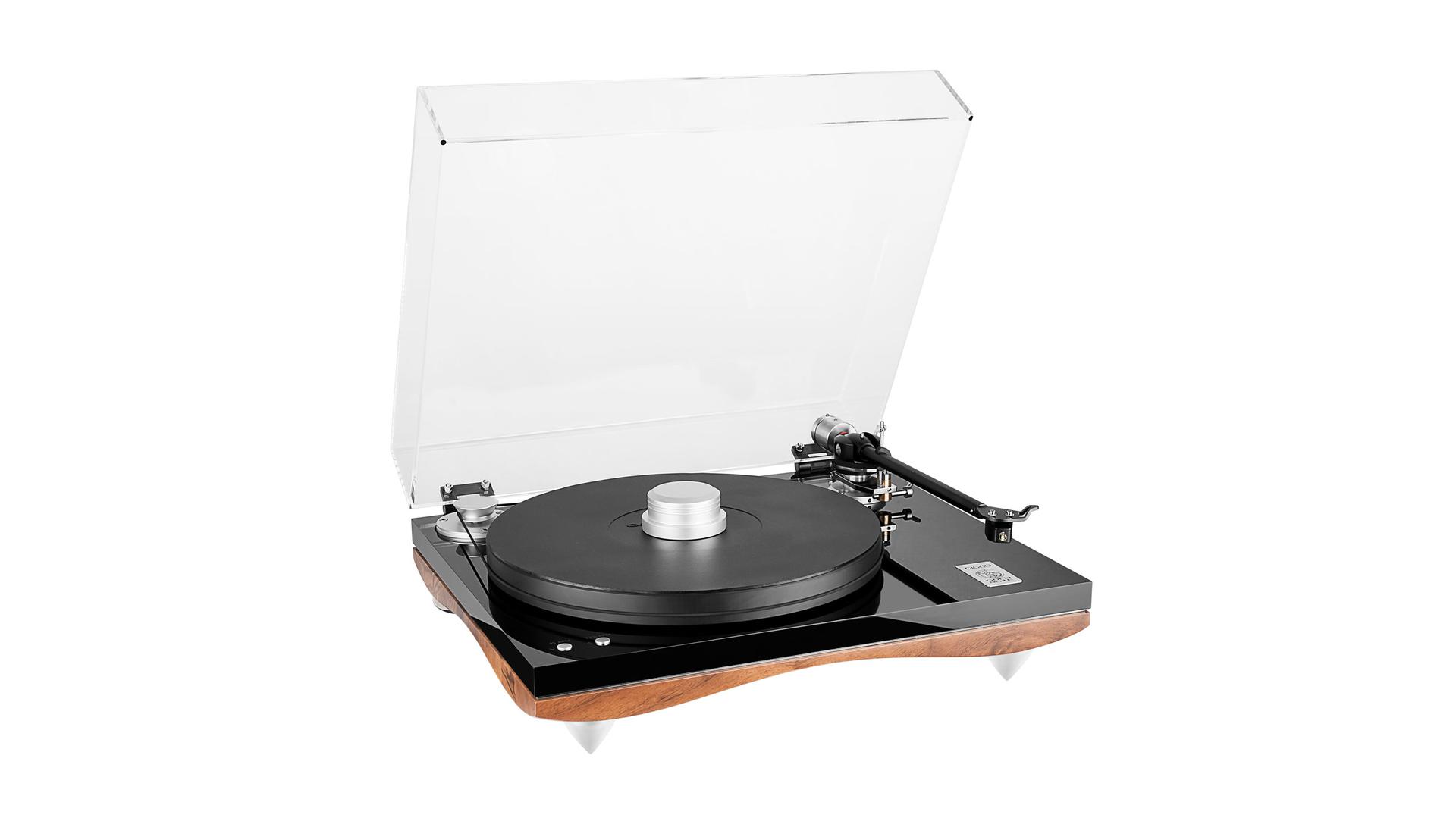 The £2,800 Giglio – and sister turntable Mediterraneo – are the latest additions to a seven strong range that runs from the affordable Valore models to the cost-no-object twin-armed Bellagio Black King and its “longest platter spindle ever”. In comparison, the Giglio looks positively restrained, but its curvy walnut underside is distinctive by most standards. Three large conical feet mean that the underside of the plinth is effectively on show at all times, which does look extremely attractive, but it’s more than just ornamentation as the plinth structure adds mass and rigidity without introducing excessive resonance. The plinth is in fact a composite of materials with a 3mm layer of stainless steel sandwiched between walnut and the black acrylic of the top layer. This sandwich construction allows the different materials to damp one another’s resonances and thus deliver a low vibration plinth as a whole.

Having the curvy underbelly on show means the bearing housing is also on display, so Gold Note lived up to its name and gold plated the outer components. A mark of the overall design is the combination of shiny gold bearing, brushed metal feet, and a walnut and piano black platter, which all combine elegantly. This bearing accepts an 80mm spindle that has a threaded hole into which the centre screws and ‘clamps’ the platter in place (as there is no force involved, this clamp only acts to stop the platter coming off). The platter itself is made of Sustarin, a hard plastic that is used in gears and bushes and the top surface is ribbed – not ‘for extra playing pleasure’ but to act as a keyed surface for the separate gel mat supplied. Finally there’s a very light clamp that sits on the record.

A lightweight DC adapter supplies power, and feeds a PWM-based power supply that offers electronic speed switching via two buttons on the top of the plinth. Drive is via an O-section belt to the periphery of the platter from a single pulley spindle. The whole ensemble is topped by a good quality dust cover that can’t be removed for listening, which keeps the turntable pristine and acts as a damage-limitation exercise against the onset of kids, pets, and cleaners, but can be an impediment to sound quality.

The arm supplied on this Giglio is the B-5.1, a nine inch model. It is largely made from aluminium with a base that allows VTA adjustment in the usual style. It is supplied with two counterweights to accommodate the majority of cartridges on the market. It features what are called micro ball bearings (made by GRW in Germany) in the horizontal plane and has a thread and weight system for anti-skate purposes and a stainless lift/lower lever.

Gold Note’s Donatello Red moving coil cartridge is a high output type with an aluminium cantilever and micro elliptical diamond tip made by Adamant-Namiki in Japan. The company specifies a moving magnet style 47k Ohm load impedance to suite the high internal impedance of the cartridge, but with my Trilogy 907 phono stage it worked best with a more normal 100 ohm, albeit with a higher output than usual. This may fluster some of the more basic phono stages that just rely on rudimentary ‘MM’ and ‘MC’ settings as the optimum is somewhere between the two. 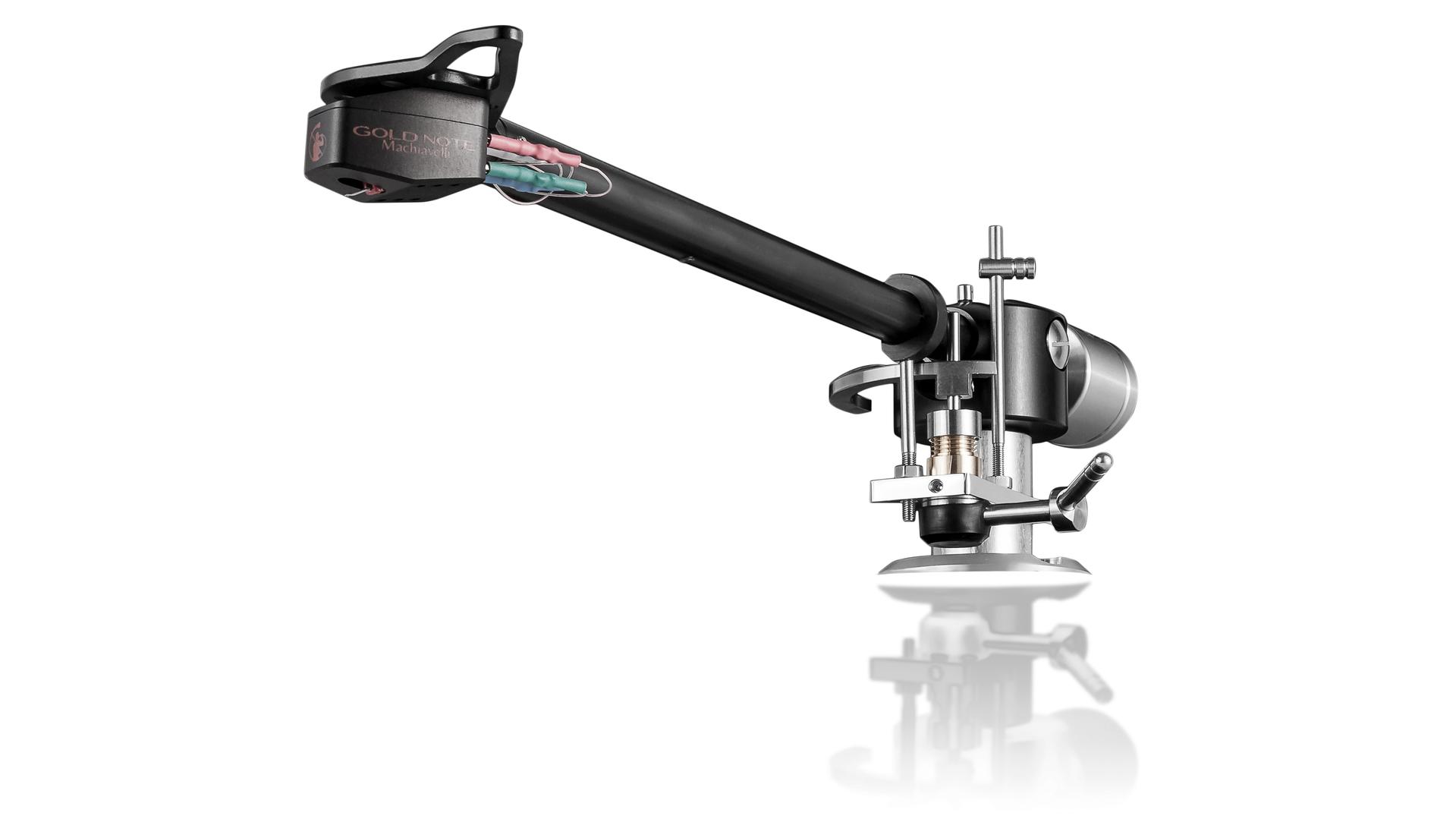 The Gold Note is a smooth performer, with an effortless style that makes it easy to forget the mechanics of the process and enjoy the music. Those looking for a more ‘edge of the seat’ musical experience might look for a deck with a more obvious dynamic presentation and a greater accent on bass extension, but it’s an assured and comfortable sound that suits Alfred Brendell’s piano on Brendell plays Beethoven [Vienna Pro Musica/Wallberg, Turnabout], extracting nice depth of image and showing good pitch stability in the process. This is an even-handed record player that emphasises the tonal qualities of each record it spins. In many ways it is reminiscent of an early Linn LP12 in the way its focus is on the rhythm rather than the drama in the music. Voices and violins benefit from the Gold Note presentation, and while bass lines aren’t the most solid I’ve heard from a record player, they are still tuneful, and the tempo is always clear and engaging.

In experimenting with the Giglio, I found removing the clamp resulted in a more subtle and detailed sound. For example, on Mop Mop’s ‘Let I Go’ [Isle of Magic, Agogo Records], which is a percussion-rich track with vibes and a central voice, the various instruments became easier to follow without the clamp in place. I also preferred replacing the gel mat with a felt alternative from a Rega P3, as depth and separation took quite a dramatic turn for the better. In my system, it became easier to hear the reverb of the various instruments and to enjoy all the different sound sources in the mix, including hand claps that had not previously been apparent. The trade-off, however, was in image width, which seemed restricted to the space between the speakers. However, when I put on Burnt Friedmann and Jaki Leibzeit’s Just Landed [Nonplace] their heavyweight, 45rpm Deutsche dub delivered a good portion of its power and the sound escaped the bounds of the speakers in the horizontal sense.

I mentioned my felted research to Gold Note and the company responded that it offers the gel mat because it appeals to the market; they make a felt mat as well and will discreetly admit that it sounds better.

I moved onto something more sophisticated in the form of Vivaldi’s Four Seasons by the Interpreti Veneziani [Chasing The Dragon] to see whether it would be possible to enjoy the full dynamic power and scale of this remarkable pressing. As it turned out it got pretty close. There is not quite the effortless dynamic range that is available elsewhere, but the sound was refined and had plenty of height. However, there’s a caveat: Gold Note offers an AC filter called the Lucca Power Distributor as an upgrade option, and this could be an option worth taking. While I didn’t have a Lucca to hand, adding a Nottingham Analogue Wave Mechanic power supply between the Giglio’s wallwart and the mains had a fairly profound effect on overall dynamics. Now there was a real vista of sound that revealed the quality of playing and drew me into the music in no uncertain terms. The interplay of the violins was particularly engaging and this combined with the turntable’s inherent grasp of tone made for a real musical treat. 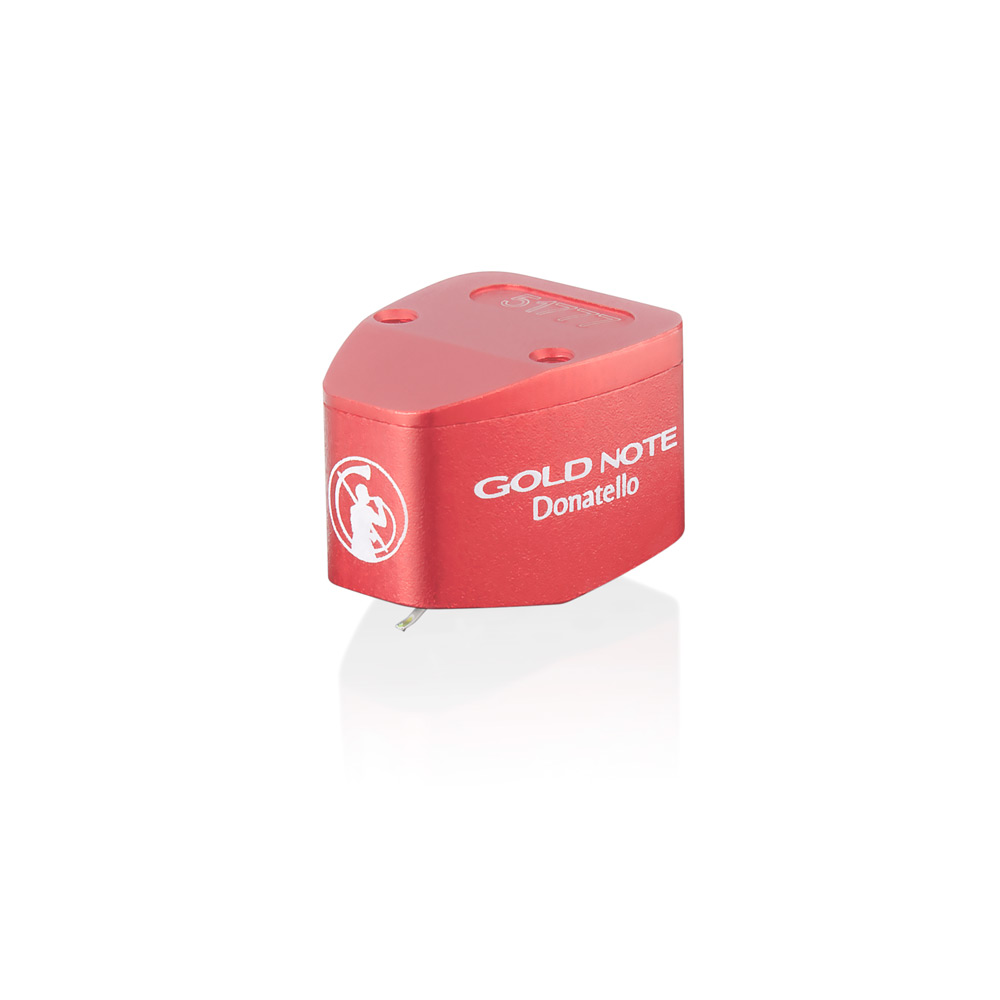 Right out of the box, the Giglio, B-5.1, and Donatello Red package is an elegant looking and sounding replay system. But it’s also one that bears up to some careful attention to its surroundings, suggesting a well-designed concept that is more than just surface attractiveness. You get out of this turntable every bit as much as you want to put in, from an unassuming but attractive sounding deck to a potential powerhouse with only a few tweaks along the way. Just make sure you use a good phono stage to bring out the best in the Donatello Red cartridge!