So, there I was, squirming, while Charlie Haden and John Taylor played ‘Song for the Whales’ from Nightfall [Naim]. Not squirming for the reasons you might expect, perhaps: this was not a squirm of embarrassment or awkwardness, this was a squirm of discomfort caused by the fact that my last cups of coffee had recently hit my bladder and were intent on escape. But the music was so utterly compelling, the event so captivating, that mere corporeal considerations had to wait, and this moment just couldn’t be interrupted.

So the FinkTeam Kims got off to a promising start despite their somewhat unconventional looks, and quirky name (it’s a Star Trek genre thing). The thing is, there have been systems which can make me squirm with awkwardness on this track, because as a piece of music it can be a bit challenging and some systems just fail to communicate, collapsing into a mess of what can easily come across as self-indulgence. But there I was, transfixed, as Charlie Haden coaxed the most extraordinarily evocative sounds from his double bass; I don’t think I have ever heard his attempts to conjure whale song, and the unfamiliar world it arises from, portrayed with such sensitivity. As a piece of music, it’s not difficult to dismiss this as a simple piano melody, bookending some vaguely whale-y and rather pretentious noodling from the bass. Quite a lot of loudspeakers permit you to do just that; and even those that give you all the tonal depth and colour so you appreciate the attempt, rarely show you the sensitivity and musicianship that gripped me in this moment. It’s not just the evocation of the sound of whalesong, somehow Haden evokes a wistful empathy for these magnificent creatures from his bass, too, and that realisation was what kept me in my seat despite a pressing need to be somewhere else. 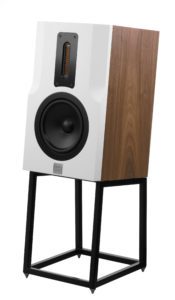 I’ve heard this track rendered convincingly by other loudspeakers, notably the Kudos Titan 707s I reviewed recently, but usually it’s the tonal colour, the shading and the realism of the instrument that gets all the attention. Here, all those things were ably served, but with added layers of sensitivity, musicianship, and sheer awe-inspiring technique. And that’s what’s so remarkable about the FinkTeam Kims, the way they not only give you the wideband tonal experience, but they get right into the heart of the music, and the performance. At almost £9,000 for a pair they’re operating in rarified territory for what are, conceptually, standmounting loudspeakers; but actually they perform in many ways more like floorstanding designs, so comparison with other standmounters is perhaps a little specious anyway. What we have here doesn’t seem to fit many of the conventional niches we’ve become accustomed to.