Our cable benchmarks are easily destroyed by working for Hi-Fi+. You begin by having the same sense of wonder at performance and shock when it comes to the prices, but pretty soon that all goes out of the window. Someone delivers a little box with some cables in it and says it costs ‘about three and a half’ and you are stumped. £3.50? £3,500? £3.5m? There is no way of telling in many cases, and you develop a blasé look and an ability to not scream ‘How Much!!!’

OK, so being unable to work out the price of a cable based on its outward appearance is a bit of a First World Problem, but this time it stood me in good stead when dealing with the Ecosse Master Reference DCT cables. They arrived like a good pair of shoes… in a nice felt bag with gold lettering and held together with a drawstring. Inside the bag were two reasonably thick silver-coloured cables with decent and very shiny RCA plugs. So far, so good. Without checking Dr Internet, these could be in the hundreds or the tens of thousands. DCT means cryo treated of course, and the more we dig, the better it gets.

This is a monocrystal cable design, with a rope-lay twisted pair conductor construction, which is then triple-screened. The cable construction is packed with cotton fibre filler to ensure the lay remains consistent and then housed in the silver PVC jacket for uniformity. This is then given the -200°C treatment.

Somewhere in the process, the cables manage to lose that plasticiser smell that blights so many PVC jackets. This doesn’t smell of cheap 1960s rain hats. If anything, it almost smells of leather, but mostly it doesn’t give off any plasticky aromas. This is not as trivial as it sounds, as I seem to be particularly sensitive to these plasticisers and find the smell of many cables obnoxious. Whether it’s the DCT treatment, the little velvet bag or some other property that gives these cables no strong pong, it’s greatly appreciated.

I actually expected not to be mentioning the ‘all Nordost’ thing primarily because it does seem to stack the deck against the Ecosse cable. But if that was the case, then the Ecosse is playing a smarter game than most, because it performed brilliantly!

The first big thing you hear from this cable is what you don’t hear. It’s incredibly good at countering low-level noise, even in an already pretty noise-free environment. Not just the obvious sounds of phones polling, but that kind of absence of background hash that makes music sound so much better after midnight. The Ecosse cable is like a late night filter, and helps drown out the ingress of a million iPhones being used during the evening.

Depending on where you live and when you listen, this could be the Ecosse cable’s biggest winning argument. If it isn’t, then what might win you over is the sheer amount of midrange detail it has to offer the listener. This cable is extremely open sounding across the midrange; not just for the price but in absolute terms. While it has the treble detail to go toe-to-toe with Blue Heaven, it also has a natural and enjoyable midrange that has none of that typical ‘zingy’ sound you can sometimes get at this price level. That makes for a maturity of sound that’s all too rare to find these days, especially in the more attainable end of audio.

Where this is perhaps most noticeable is in playing Spem In Alium by Thomas Tallis [Tallis Scholars, Gimell]. This is something of a bellwether for me, because if it is full of midrange detail (as it is here) it sounds like Tudor-era polyphony of the finest degree, but when it lacks that same clarity it sounds like incidental music for some dreary period romance-drama. It’s part of the reason why I like Blue Heaven, although the top-end can get a little scratchy. That doesn’t happen here, and instead the music soars and extends to the heavens. 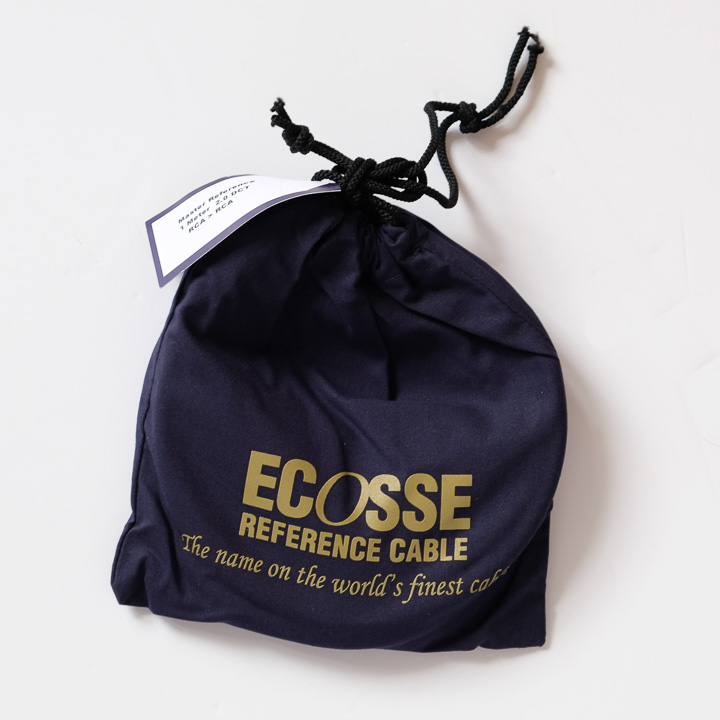 I found the cable worked best between source and preamplifier, but in part that is because it was a bit too long a stretch between pre and power and by the time I moved them closer, there was too much downtime. I’d be happy in using them anywhere.

I am impressed by Ecosse Master Reference DCT’s ability to follow the Hippocratic Oath. It’s a ‘first, do no harm’ cable through-and-through. There are no nasty brightness or brashness, no dull spots or drab midrange moments, no excess bass and yet no obvious thinness either. In terms of presenting the soundstage for the listener, it does precisely what the system and the music presents, with few if any attenuations or alterations to the sound. This is how a good cable should behave, and so few do. Or rather, most cables that purport to do no harm end up ruining the sound by trying to play it too safe. Ecosse never does this and I could happily play the sort of Albert Ayler-style free jazz that I occasionally unleash. This passes the ‘Ghosts’ test [Spiritual Unity, ESP].

For giggles, I went into extreme-fi mode, and tried it next to some very expensive cables from the likes of Crystal. Ecosse gave a good account of itself, but when you are looking at spending more than 30x as much on a length of wire, there is a lot more sophistication and finesse behind the sound to be had. Ecosse has poise like a debutante (showing my age here), but the best of breed have the poise of a prima ballerina assoluta. But that is not to discredit Ecosse at all. If anything, it stands up against these top-tier models surprisingly well given the massive price differential involved. And also, unless you are likely to use the very best equipment in an optimised room, the differences between good, better, and best begin to close up. The Ecosse cable might just be at the optimum point where performance and price meet.

I was pleasantly surprised by Ecosse’s Master Reference DCT twice over. The first time because I thought it cost 10x as much as it did, and the second time because it came close to making a sound that lived up to that rookie error. Highly recommended!