How do I find yet another jokey way of describing a Tellurium Q cable without ever being able to mention anything about what it’s made of? Geoff Merrigan, CEO of Tellurium Q, is famously taciturn about the inner recesses of the company’s cables, preferring instead to give different families of cables different names to denote their place in the TQ hierarchy known as the ‘Matrix System’. Blue is the entry-level, then Black, then Silver. Then it repeats itself with Blue Diamond, Black Diamond and finally Silver Diamond at the pinnacle of Tellurium Q performance.

After that, things got a little confusing as ‘Ultra’ grade cables began appearing; Ultra Blue was better than Blue but not quite as good as Black, but Ultra Black was better than Silver and Blue Diamond. And then there was Reference, which knocked Silver Diamond off the top slot. And now, the Blue, Black, Silver and Ultra versions of each are getting their second outing in Mk II status, replacing the original six lines. At least there are fewer product lines in the interconnect cables. For now.

The new and improved Black II interconnects are available in single-ended RCA and balanced XLR form (I tried both). The improvements are not disclosed in physical terms; they would be academic anyway as they weren’t disclosed in Black, and the assumption is it’s either more – or less – of the same in Black II. The product lines have distinct characteristics, reflecting their potential place in a system. For example, Blue is designed to be exceptionally forgiving of the hard and brash top end one might find from inexpensive audio components.

On the other hand, once you get to Silver II and beyond, the cables become increasingly detailed and revealing because they are more likely to sit in with some very expensive audio equipment that demands revealing interconnects. As for Black and Black II, it has that difficult balancing act to deal with; neutral and transparent enough to bring out the best in good middleweight audio, but neither so open as to highlight any potential shortcomings in the system nor so shut in as to limit such systems potential to fly!

In a way, I agree with Geoff’s reluctance to discuss design, geometry and materials in any Tellurium Q cable because they can so easily sway listeners. We all make assumptions about the sound of specific materials or layouts and absent that information, we are ultimately tasked with listening to draw our conclusions. That being said, Tellurium Q does emphasise reducing what it refers to as ‘relative phase transient distortion’ and the Black II is geared toward maintaining phase coherence above all.

How it works with phase is, of course, not disclosed. If it were simply the more ‘out there’ claims that Tellurium Q went all gnomic about, I’d argue that these claims were a little wild. But as Tellurium Q gives the same silent treatment about what metals it uses in its conductors as it does about ‘relative phase transient distortion’, I have to give the company the benefit of the doubt.

Tellurium Q Black was the great polariser in audio. Some loved it for its smooth and refined sound. Some hated it because they wanted a more lithe and bouncy-sounding cable. Even those with the same products in their systems were polarised by TQ Black, with some claiming it ‘tamed’ a system and others finding it ‘flattened the life’ out of a similar system. 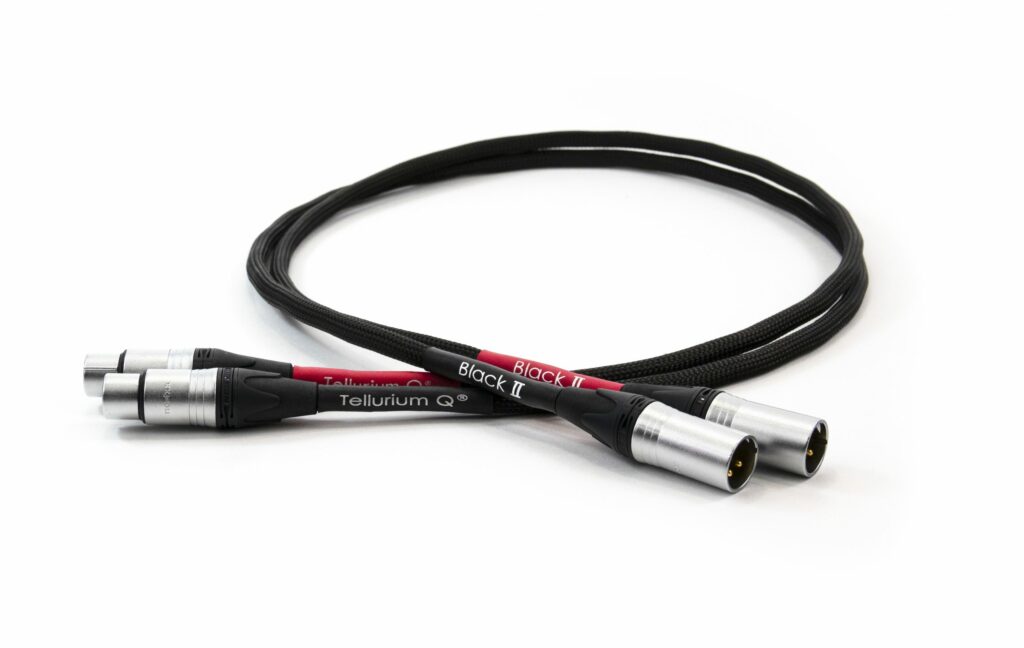 Black II is more universal, covering both the need for refinement and the requirement for some additional rhythmic precision and energy. I still maintain that it goes more toward ‘refinement’ than it does ‘bounce’ with fast transients and a good sense of rhythm, but it has become a more egalitarian sound.

Sonically, Tellurium Q is on to something here. The sound is more focused and coherent than I expected; detailed without being overattentive toward detail, and precise without being prissy, but most of all, the sound is coherent and communicative. This holds as much when playing the sophisticated modern string quartet work ‘Entr’acte’ from Orange [Caroline Shaw/Attacca Quartet, Nonesuch] as it does when dealing with the retro 70s sound of the title track from Lady In Gold by Swedish rockers Blues Pills [Nuclear Blast Records].

She can cut it

The latter is especially telling; singer Elin Larsson has a powerful soul-rock voice; she’s no Janis Joplin but can still cut it. The track is almost poised on a knife-edge; any upsets in the system, and it loses its way after the middle eight, but Black II helps keep your attention on her and the rest of the band, and you get just a few glimpses of a modern Big Brother and the Holding Company. It hangs together because the Black II helps keep it together in those good, honest systems that cost a couple of grand, give or take.

The cable has its limits. Black II remains on the smooth side, and those with either very smooth sounding systems or – paradoxically – those after a more rough and ready sound may look elsewhere. Citing that Blues Pills track again, Black II just about keeps to the correct line making the sound very full and 70s.  Sometimes I’d want more graunch from those guitars.  And, if your system is on a fast trajectory to high-end superstardom, Black II will only go so far, and more revealing cables – including more revealing cables from Tellurium Q – beckon.

While I have no idea what Tellurium Q Black II is doing, what it’s doing that the original Black wasn’t doing, and why. But when Black II does what the cables are supposed to do – play music – those empty musings fade away. It doesn’t matter why Black II works; what’s important is that it does work. I can see the cable in various outstanding value systems. making them sound smooth, inviting, rhythmic, and musically engaging. It’s a cable to enjoy music by!