There are two distinct avenues for headphone amplification today – either buying a product from a brand with a well-established reputation for making headphone-based products, or from a brand that makes traditional two-channel audio that has ‘branched out’. Until recently, the former option was the more alluring, because it almost seemed as if long-standing audiophile companies were paying lip service to headphones. However, some of the more switched on traditional audio brands (pun – but not oxymoron – intended) have started producing products in the headphone ‘space’ every bit as well designed and fit for purpose as they do for two-channel loudspeaker audio, and every bit as good as their headphone specialist counterparts. Copland – with its DAC215 – is one such company. 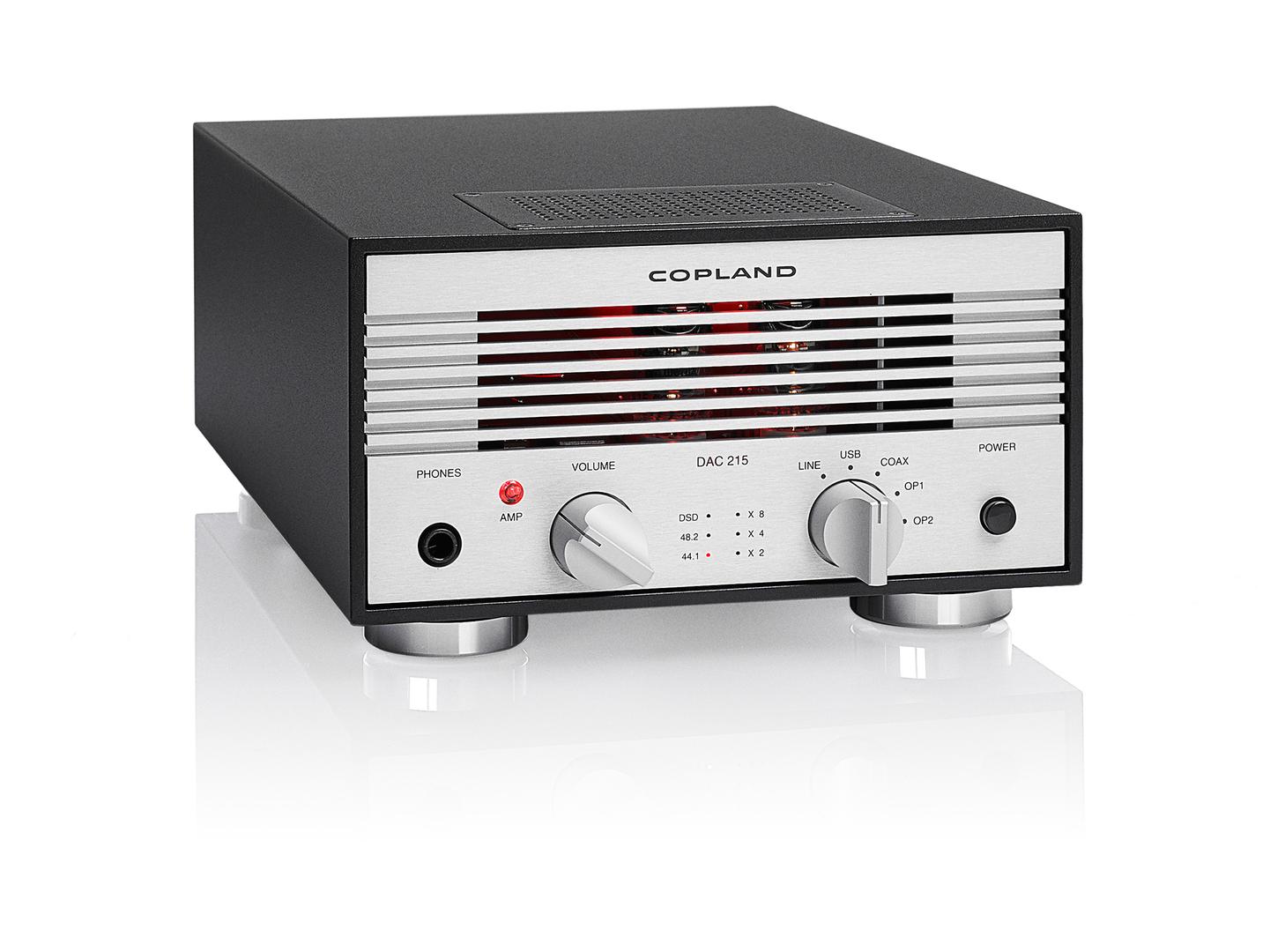 The DAC215 is more correctly a product with feet in both camps. The feature set points to a device that sits somewhere between a high-performance digital preamplifier (with a lone line input) and a USB DAC with a built-in headphone amplifier. Both sides of the equation are considered with equal aplomb, with an ESS ES9018 Sabre DAC at the heart of the converter, a pair of ECC88s driving the headphone amplifier and line stage. The digital inputs (alongside USB) might be considered ‘legacy’ devices for those used to a computer-based audio environment, but point to a way for audiophiles with digital players and streamers of all descriptions to move into the headphone world. And, perhaps most importantly in a style-obsessed world, it looks pretty cool in a distinctly retro manner.

The DAC215’s front panel, with its two glowing tubes backlit by a red LED visible through a slotted grille on the front panel, and with a pair of large dials, and a big red or green ‘glow plug’ like LED denoting whether the preamp mode is engaged, give it a look reminiscent of classic audio. The backlighting is also a handy indicator of warm up; the DAC215 takes about 40 seconds to start up, and you know when the process is complete when the backlight comes on. If you don’t like the backlight, it can be turned off using a switch behind the valves, which necessitates opening the top plate. In so doing, you are met with a neat and ordered circuit layout  of DAC at the rear, amplifier to the front, with logic control and USB controller on daughter boards, and a screened off toroidal transformer power supply.

The ESS Sabre DAC used is one of the company’s desktop grade devices (confusingly, the company has the same nomenclature for portable and desktop DAC chips), but when you plug the Copland into a computer, you are met with the name ‘Combo 384 Amanero’ instead of ‘Copland DAC215’ because the converter uses the Amanero USB receiver board. This is only a little thing, but I think Copland should re-write the couple of lines of code required to rename the computer connection.

The DAC is, however, extremely flexible, with a range of PCM and DSD rates, even if the way these are indicated on the front panel needs some explaining. There are two arrays of three vertical LEDs; the left side denotes whether the signal is DSD-derived, or a PCM sampled input at either 44.1kHz or 48kHz, while the ones on the right indicate multiples of these base sampling rates. So, feed the DAC215 a DSD128 signal and the ‘DSD’ and ‘x4’ indicators, and ‘48’ and ‘x8’ denote 384kHz sampling. There is no indicator for the bit-depth of the signal, and there are no upsampling options.

There are basically three tales in one here; the DAC215 as a preamplifier, as a DAC, and as a headphone amplifier. The easiest one to crack is the first, as it’s a good, but relatively limited, preamplifier. The overall transparency of the preamplifier stage is never going to challenge the best of the dedicated preamplifiers even at the price, and the overall lack of additional functions (like a remote control, balanced inputs and outputs, balance control, or more than one line input) might prove more of a frustration over time, but for what is essentially a vestigial line preamplifier, the DAC215 acquits itself well. A good preamplifier should draw no attention to itself and the DAC215 never once commits any sins of commission in its preamplifier duties. Nevertheless, if you think of the DAC215 as an audio Swiss Army Knife, the preamp stage is one of those tools on its underside that seems handy in principle, but you never end up actually using. 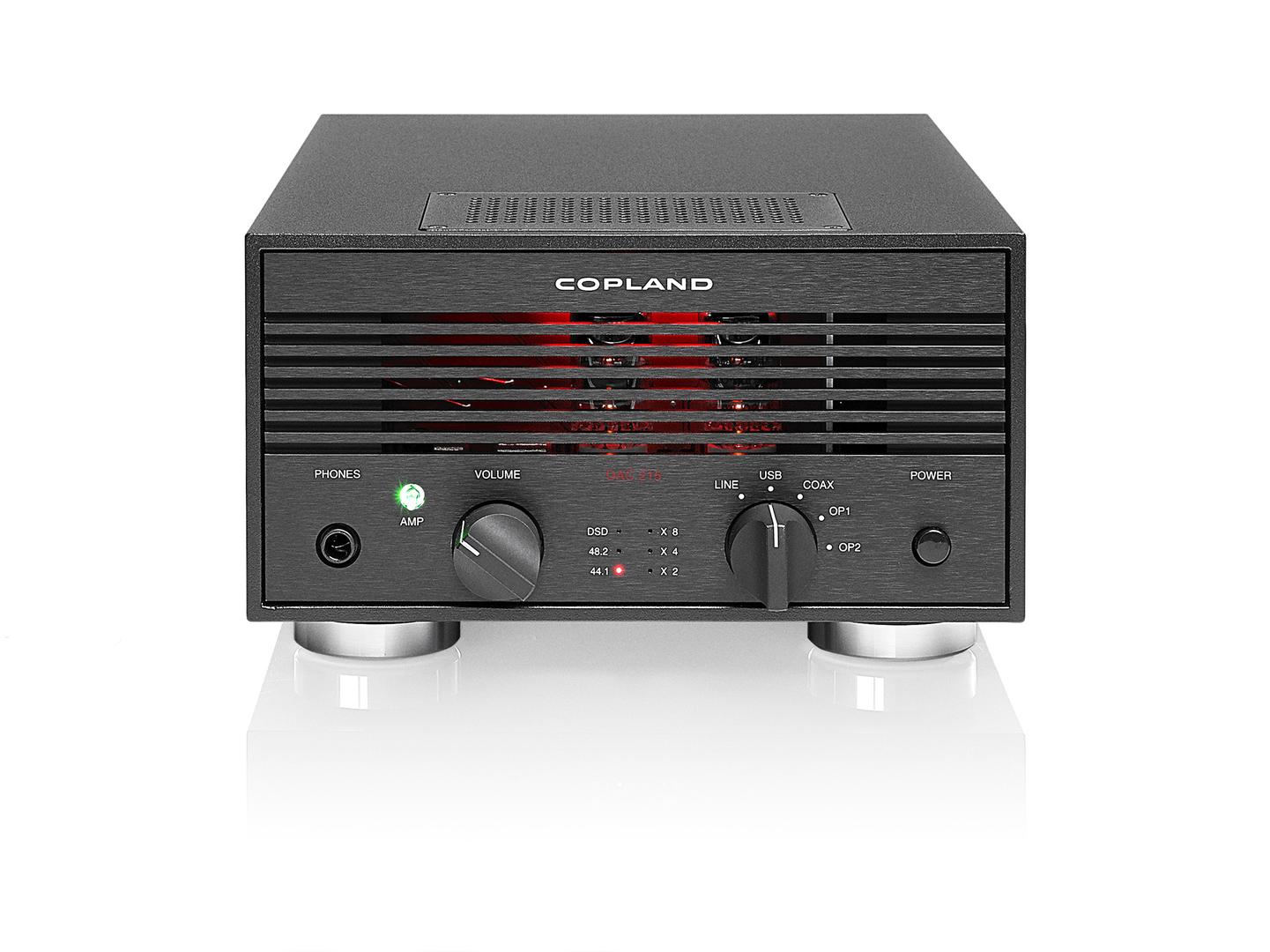 The DAC section, on the other hand, is its main blade, and it’s razor sharp. Well, actually it’s not sharp at all, and that’s part of the great joy of using the DAC215. Sounds generated here are enticing, musically satisfying, and easy to listen to for hours at a stretch. I’m conscious of a self-snared trap here, in describing the DAC215 in ‘lovely’ terms, it could be mistaken for something saccharine or slightly dull sounding. It could even be taken as a backhanded compliment, akin to Chekhov’s ‘you have lovely hair’ quote. But the fact is, the DAC215 does sound ‘lovely’, in the fullest, face-value manner.

This is the kind of DAC that makes you aware of the intent behind the music every bit as much as it does of the music itself. In other words, play something bland and well-recorded and you get the whole well-recorded part, but you quickly get as bored as the musicians in the session. On the other hand, play something where the musicians were playing with more passion and excitement, and that energy sizzles. One of my regular tests for this is ‘Memphis Soul Stew’ from King Curtis Live at Fillmore West [ATCO], as it’s both a test of the dynamic range of the system over the slow build of the introduction, and it’s a test to see just how easy it is to spot these are not simply session musicians, but some of the best players you’ll ever hear. If Bernard Purdie’s drums beats, Jerry Jermott’s bass lines, Cornell Dupree’s guitar licks, and especially King Curtis’ sublime sax playing don’t sound like real people riffing off one another, any component can be detailed but dull. Here, each musician comes alive in his own space. ‘Lovely’ here means a combination of that sense of life, without too great an analytical sense.

For the most part, you tend to find yourself drawn to listening to classical and jazz through the Copland, although I’m not altogether sure why that is the case. Music is always expressive, always fluid, always dynamic, and always possessed of good detail and energy when played through the DAC215, and that applies whatever the musical genres being played. However, I found myself continually drifting toward the acoustic rather than the electric or electronic. The Copland didn’t panic staring down ‘Chameleon’ by Trentemøller [The Last Resort, Poker Flat], and the bass was deep and of a suitably malevolent nature through the DAC’s circuits, and the only issue I could detect was a very slight hardness to the sound of grungy guitars played loud and dynamic, with bands like ZZ Top and AC/DC. However, you had to thrash the system to even begin to notice this. Maybe it’s the cool retro looks giving me a distinctly Blue Note vibe!

Last, and in many respects best, comes the headphone amplifier section. This was uniformly excellent, with seemingly endless power in reserve and retaining that detailed, musical, ‘lovely’ vibe. Sounds were well placed in a soundstage as open as the headphones would permit, nothing taxed the amplifier (even ‘beast’ loads passed off uneventfully), and the overall balance of accurate and enjoyable made the DAC215 a great one-box solution. Interestingly, the move away from rock experienced in using only the DAC section of the 215 evaporated, and I was back to playing everything, and spending many hours doing so. 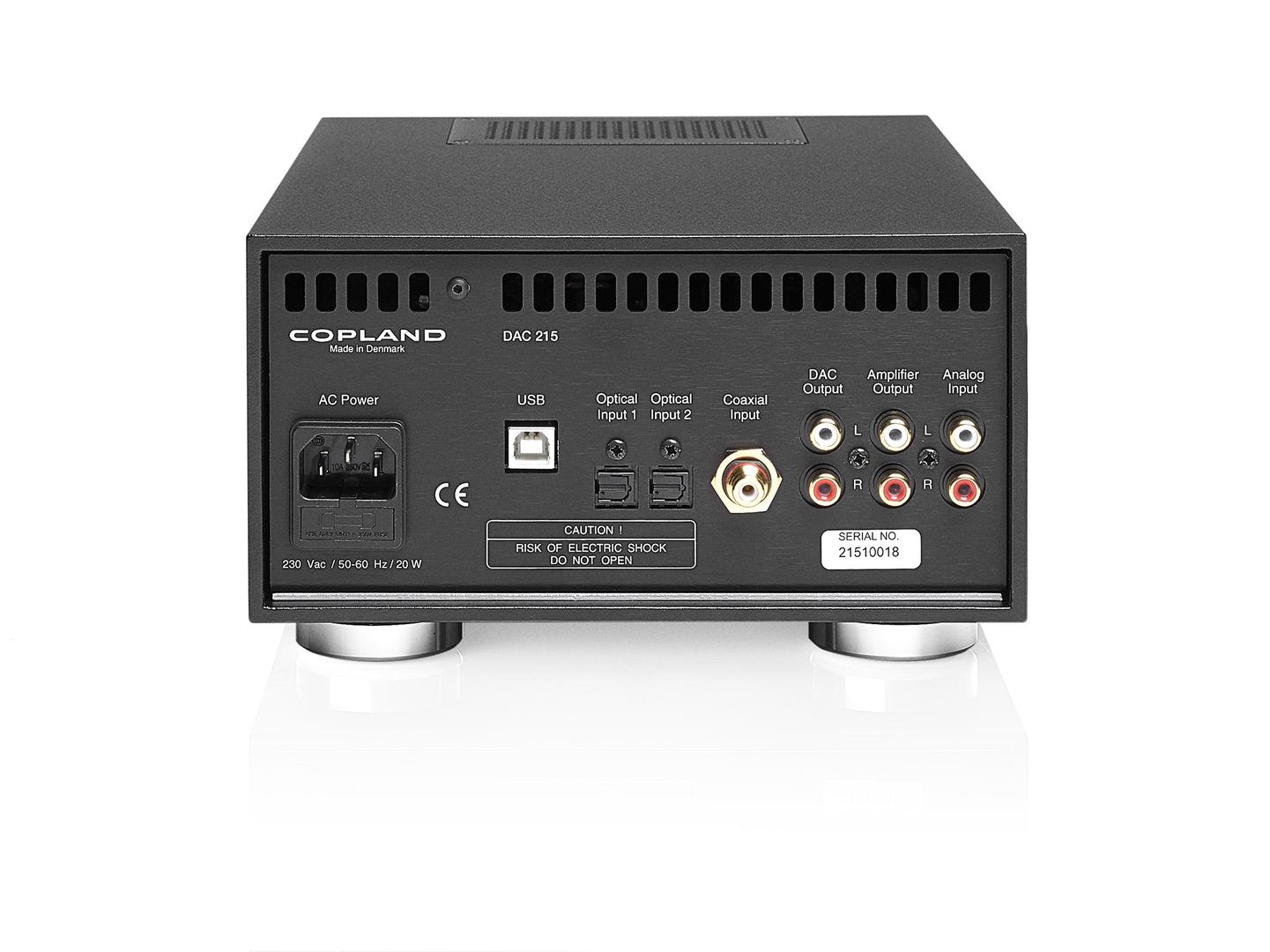 The Copland DAC215 is the gateway between the worlds of personal and traditional audio. Traditionalists who remain slightly dismissive of the personal audio world will see this device as a lovely sounding DAC that can also do ‘that headphone thing’ very well, and personal audio enthusiasts will see a lovely sounding headphone amplifier and DAC that can speak to traditionalists and their audio equipment. If you want a satisfying and musical sound that you can listen to for hours on end (and let’s face it, isn’t that the point?), the Copland DAC215 is an ideal travelling companion in your trek through your musical canon. Recommended.