Although we are one of the keenest magazines to get conrad-johnson products into print, sometimes it’s hard to keep up. We reviewed the original ET7 in February 2018 (Issue 156) and a year or so later, conrad-johnson improved the ET7 to ET7-S2 status, the product tested here. The changes are both physically and sonically significant, moving the ‘baby GAT’ ever closer to the performance of its bigger GAT Series 2 brother.

To recap (there is a pun in there, watch this space), that ‘ET’ prefix to the name means ‘Enhanced Triode’ because the circuit uses a single 6922 double triode tube, acting as a single-ended triode for each channel. This provides voltage gain and sends the signal to a similarly minimal high-current MOSFET buffer, which helps provide a very low output impedance. This makes the single-ended only ET7-S2 extremely flexible in terms of interconnect cable design and length. DC voltage is provided by a discrete voltage regulator that isolates the audio circuit from the power line by maintaining negligible impedance across the audio frequency band. In addition, infra-sonic noise is minimised by operating the tube heaters on a DC voltage supplied by a separate regulated power supply. All of which is a direct ‘trickle down’ from the design developments that took place in moving from the original GAT to the GAT Series 2. 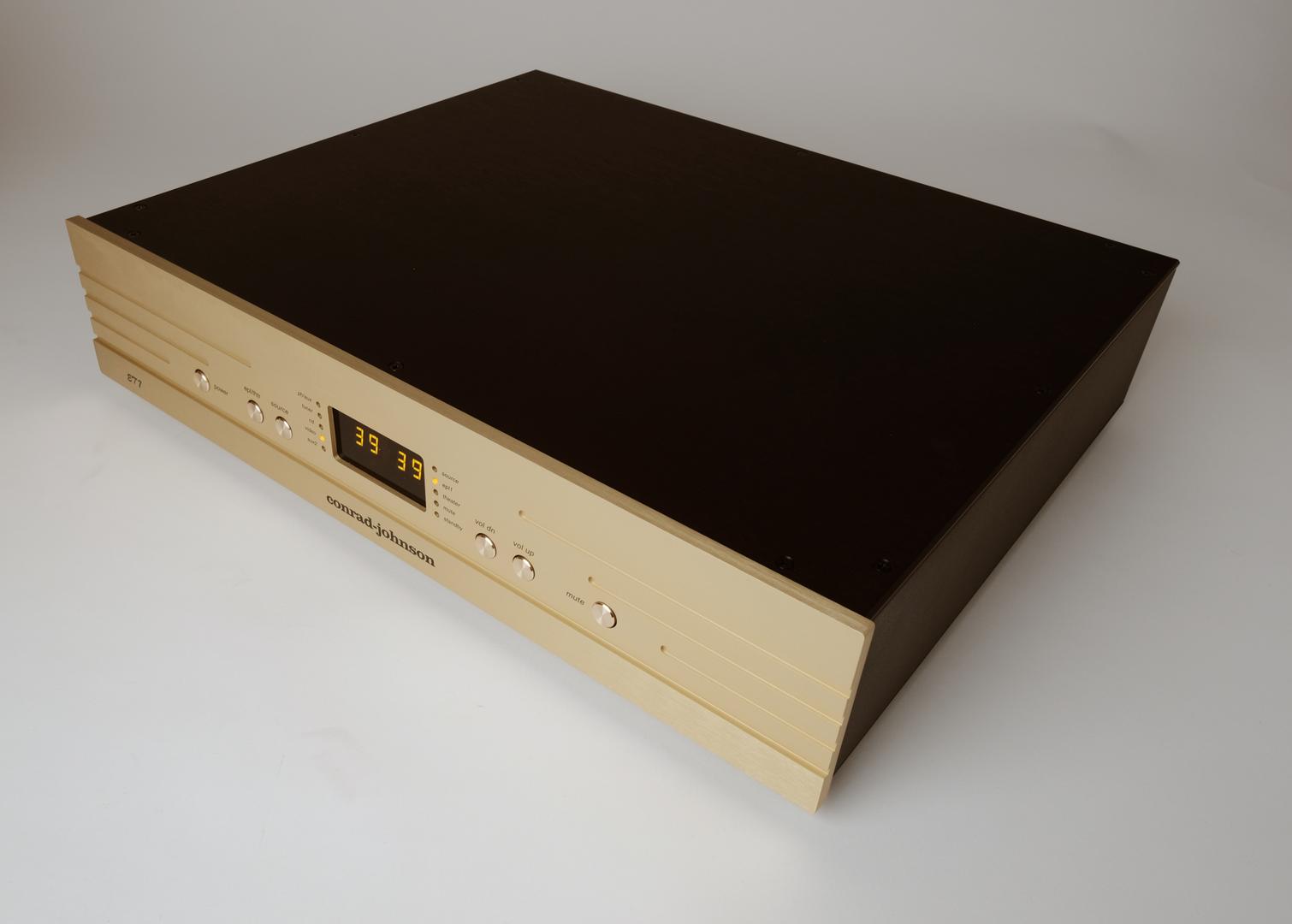 The ET7-S2 retains the microprocessor-controlled relay system and network of metal-foil resistors as its gain control, allowing one hundred 0.7dB steps in volume and balance. The preamplifier has five single-ended line inputs, and two external processor loop input/outputs, the second of which puts the preamp into ‘Theater’ mode and automatically switches the ET7-S2 to unity gain. Unlike the entry-level ET6/6SE, there is no optional built-in phono stage, but there are two standalone phono stages in the range. Also, unlike the ET3, the ‘balance’ control on the remote control actually works, even if there is no replication of that balance control on the ET7-S2’s front panel. As ever with c-j, volume is displayed by a pair of two-digit yellow LEDs in the centre of the front panel, and these are flanked by yellow LEDs to denote source and function. Power up puts the ET7-S2 into soft-start heat-up mode, and the blinking mute switch is a reminder of that. The classic gold front is unique to c-j models, but it has a timeless, almost Art Deco style all its own. In fact, the front panel is completely identical to its predecessor, and even the ‘S2’ suffix is not included.

So, what’s changed? The power supply reservoir section is substantially improved, with the addition of five large c-j capacitors (hence the ‘recap’ pun) to the right side of the circuit board. In addition, the quality of the input and output connectors have been improved to bring them to GAT S2 standard. Visibly the product appears unchanged aside from the ‘S2’ part, and the much-improved build quality seen in recent models (including the ET7 it replaces) continues unabated.

The improvement itself is a good thing, even if it takes an age to run in (those c-j caps condition themselves ‘majestically’, taking weeks to fully come on song). And, as mentioned earlier, it is both a significant and substantial improvement over the ET7. However, the original ET7 was only on the market for less than a year and a half before the replacement ET7-S2 was announced and there is no upgrade path because the number of components changed, and labour costs would make such an upgrade too excessive to justify. To my mind, less than two years is too short a product lifespan for a product as significant as the ET7, even if its replacement is superior. I thought the ET7 was good, the ET7-S2 is better, and I hope I won’t be having the same discussion about the ET7-S3 for at least another couple of years from now.

Back to the performance. Once again, it delivers a performance even closer to that of the GAT-S2. And once again, this is the product for the more well-rounded listener, rather than those who go for the immediately impressive. This is a preamplifier that is for those who listen to music, not organised noise or a collection of test tones. In its predecessor, that made for a very effortless and graceful sound that might seem almost too refined for those who are more used to grunty and rhythmic sounding solid-state preamps. In the ET7-S2, that objection (already mild) goes away as the preamp brings much of the GAT S2’s authority to the mix. Bass lines get clearly defined – my Trentemøller torture track ‘Chameleon’ [The Last Resort, Poker Flat] highlighted just how much stronger and more powerfully defined these bottom-end notes have become. The GAT S2 was always something of a master of the bass line (among its other traits) and the ET7-S2 has taken that notion to heart more than before. The ET7 had depth and power; the ET7-S2 has depth, power and authority. This comes at no loss to the overall presentation elsewhere, and the ET7-S2 simply adds another GAT-shaped feather to its hat.

The additional reservoir caps do also seem to add an extra dimension to the soundstage, giving it even more depth and width than before. Once again, it improves the ET7-S2 along the same lines as the GAT-S2 and comes within ‘a gnat’s crotchet’ of the big boy.

The best thing I can say of the ET7-S2 is that it’s even more likely that the source or power amp will begin to show its hand before the preamp. This is rare because ask anyone in the high-end to point out the weak spot in any system, and they will likely look to the preamp. The ET7 was one of the few preamps that got out of the way of the sound, but in no way as well as the GAT S2. The ET7-S2 is much closer to the GAT-S2 in this respect, and even densely packed music like the conclusion to the Solti Mahler Eighth [Decca] is given the space and dynamic contrasts it both deserves and demands. Instrument upon instrument, and then the choir, are all given their layers in the soundstage, without any of the bleed-through or blurring that happens in most systems.

In fact, the quality of the ET7-S2 makes you wonder if the jump to the GAT-S2 is worthwhile. Certainly, if you like one, you will like both and the whole sense of one being the ‘lite’ version of the other has gone now. I didn’t have the two side-by-side, but from experience the GAT-S2 still has more than an edge; the preamp’s additional transparency and ‘there-ness’ it produces is unparalleled, and although these elements are reproduced in the ET7-S2, they are more facsimile than mirror image. That all being said, used with anything less than the best throughout, and the ET7-S2 closes the gap with the GAT fast. I can see the ET7-S2 being the choice over the GAT in some systems, but more for the cost saving and other devices making the return on investment seem weaker, rather than the ET7 being ‘better’ than the GAT.

The caveats are the usual ones for c-j products. The preamp inverts phase, deliberately to limit the number of devices in the signal path, and this is something c-j has been doing since, well, for as long as there have been c-j products. The preamp uses loud relays that produce a noticeable ‘clacka, clacka’ sound as you raise or lower the volume or change sources, but this too is something c-j has been doing for years. Then there’s the time taken to run in the capacitors. but let’s face it, that’s also something common to every conrad-johnson preamp with those large white c-j caps. It’s worth putting in the hours because it pays sonic dividends.

The ET7-S2 is a remarkable improvement on the ET7; one that takes the performance ever closer to that of the GAT S2. The ‘baby GAT’ is all growed up and it isn’t a baby anymore. The improvements brought about by the additional power supply (and presumably the connectors) give an already graceful sounding preamplifier prima ballerina poise but coupled with an ability to thwack and growl with the best of them when needed. It’s good enough that prospective GAT-S2 owners might ask themselves some very difficult questions before paying much more for the big hitter.

phase: inverts phase of all inputs at main out