The audio business is a bit creepy: it suffers from mission creep and price creep. Brands start out with good intent and a fine product at a fair price, but then slowly begin to add more devices to the basic design, and the price begins to rise accordingly. In its 40 years, Arcam has resisted these temptations better than most, and its rSeries components typify this pared-down, no-nonsense approach to audio design.

The rHead (pronounced ‘arhead’, not ‘aah… head’, as the latter can get you into trouble in the wrong places) is a standalone headphone amplifier, and an obvious visual match to the irDAC-II from the same brand (not tested). It’s a small, black box with a choice of one XLR and one RCA stereo input. The prevention of mission creep kicks in here, because this is not a two-input headphone amp; the choice of input is selected at the rear of the rHead, using a small toggle switch. The prevention of price creep kicks in at that back panel too, as the rHead draws its power from an external 12V, 1.5A power supply. Even the power switch is on the back panel. 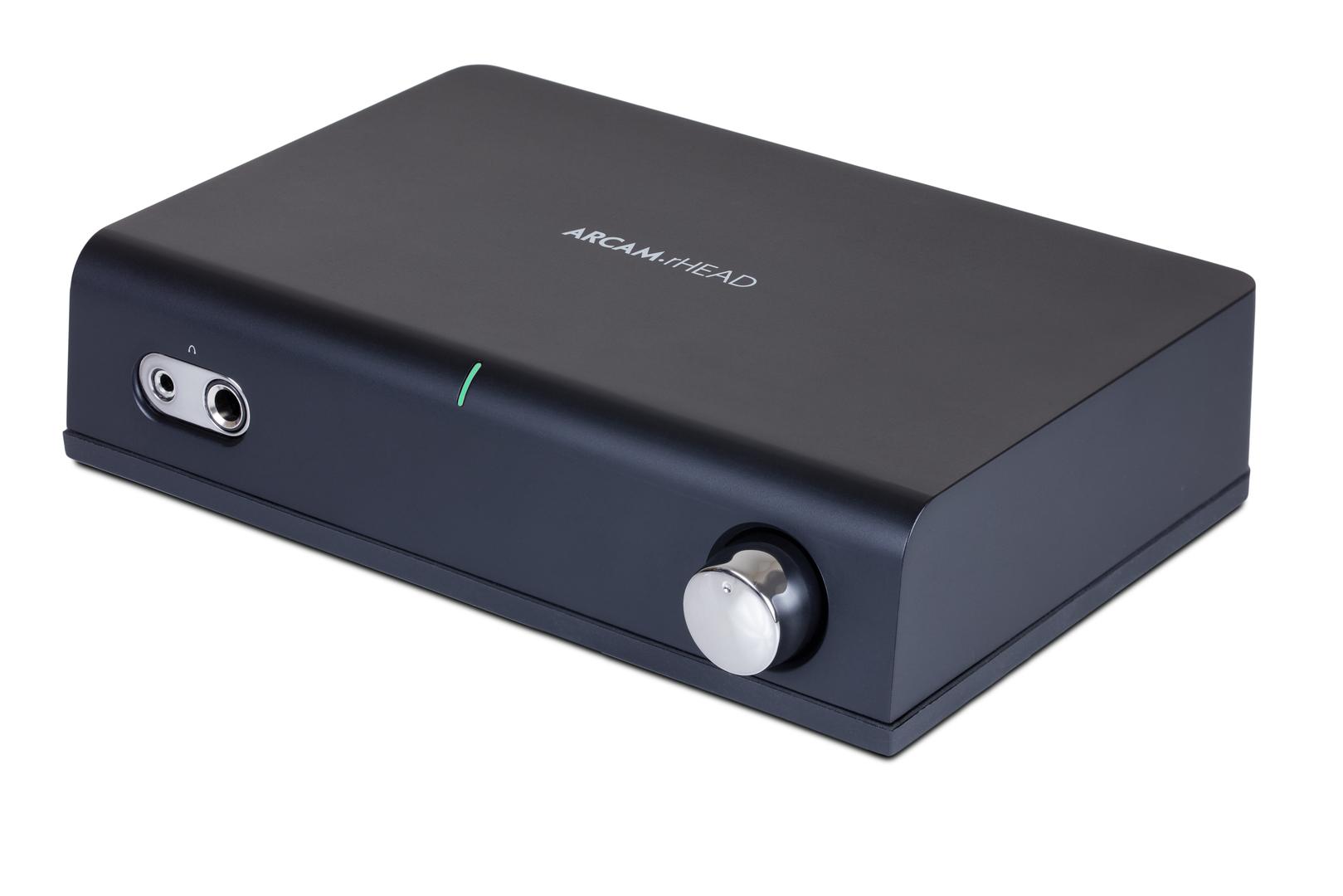 The front of the rHead is equally severe in its ornamentation. A little green light in the centre of the front panel to denote the juice is flowing. From the front, 3.5mm and 6.35mm headphone jacks poke out from a little recess on the left of the  black panel, while a silvery volume control is to the right. The volume control has a standby/mute click to the far left of its travel, and the green LED turns orange as a result of engaging mute. Oh, and the Arcam rHead logo is printed on the top panel. That’s it! No tone stack (mission creep, remember), no balanced output (mission and price creep), no inch-thick aluminium front panel (price creep). In fact, there’s practically nothing on the rHead that gets in the way between music and listener from the outside.

What counts instead is what’s underneath that minimalist exterior. The first clue is the weight of the rHead. You might be forgiven for thinking from the pictures and the price that the Arcam box is some ABS lightweight, but is in fact cast and anodised black aluminium. Although the rHead is not much thicker than a blockbuster paperback book (remember them), the main box weighs more than the hardback first edition of the same. The lone exception is the low resonance rubberised baseplate (Arcam’s no-frills design means it unwittingly channels The Treasure of the Sierra Madre meme to comic effect: “Feet? We don’t need no stinking feet!”).

The internal organs of the rHead receive a fine bill of health, too. The amplifier itself is a discrete and true linear Class A design. This means it’s not a ‘chip amp’, but a classic amplifier design and has absolutely no transistor crossover distortion. Theoretically, when playing a difficult headphone load at high volumes, the rHead will switch into Class B, but ‘difficult’ here seems to be ‘trying to drive ear muffs’; as I value my hearing, I’m not willing to play at 2V or more just to prove a point.

This amplifier design is met by the digitally controlled but ultra-linear analogue Texas Instruments PGA2311A resistive ladder array volume control behind that shiny knob. This means that along with no crossover distortion, you have no tracking errors across gain settings. Tracking is an issue many traditional amp designers now turning their attention to the headphone world completely overlook, because a decibel between left and right channels notionally makes no great odds when you are several paces from your loudspeakers, but quickly becomes an insurmountable obstacle when your ears are a few millimetres from the drive units. In fact, the best conventional stereo amps now have superb tracking (the design here is pulled from Arcam’s own A49 flagship), but many lower cost options default to a simple potentiometer. Rather than a potential cause of price creep, this is money spent in the right places.

The sound of the rHead is almost immediately impressive. The first time you power it up, it might take a few minutes before coming on song, but after that putting it into standby leaves it thermally active, and it sounds great almost the moment you move into the green. In fairness to Arcam, this review was conducted during a wintery cold snap in the UK, and it came out of the box like it had come out of a freezer, so maybe that had an influence on that first half hour or so. In use, the rHead runs warm to the touch (a potential benefit during that wintery cold snap is it’s a desktop hand warmer; a potential downside is it can also become a desktop body warmer for a heat-seeking cat).

After moving the cat aside and the staunching the resulting blood flow, I found the rHead to be a deft and musical performer. The first and most important test of a good headphone amplifier is noise floor, more than adequately checked with the ten-driver Noble Kaiser 10 custom-fit IEMs. These sensitive, ten-way designs are forgiving, but extremely revealing of source and amplification. Aside from a faint hiss at relatively high volumes with no music playing, the Arcam’s background is silent. And let’s be honest here: to discern that faint hiss required after-midnight listening in cloistered silence, so in normal use, even the most sensitive smartphone-chummy earphones or CIEMs will be fine at any level. At the other end of the scale, I backed off the volume control long before the Arcam began to get upset, even with a pair of older heavy load HiFiMAN planar magnetics. Ultimately, within real-world operating parameters between ‘whisper’ and ‘hearing damage’, the rHead is a fine, clean, and consistent performer.

In fact, it’s that consistency that really makes the rHead something special. From the deepest bass you can get from your headphones up to dog-whistle frequencies, the rHead is refined, graceful, temporally on the money, and extremely detailed. One of my regular test tracks is ‘Memphis Soul Stew’ from King Curtis Live at Fillmore West [ATCO] because its slow build is a test of a system’s dynamics, and the Kingpins are about the funkiest group that ever took to a stage, and any discontinuities in timing are immediately apparent. The rHead passed both these tests with flying colours, in a way one might expect from an amplifier costing the other side of £1,000. The detail it reveals in this track, and the atmosphere it finds in ‘The Lover of Beirut’ from Anouar Brahem’s The Astounding Eyes of Rita [ECM], was both captivating and exhilarating. And yet, for all this detail and definition, the rHead never once sounds fatiguing or wearing. As a reviewer, if there’s a downside to the rHead, it’s that it would suspend my critical faculties in headphone reviewing, because most headphones get a free upgrade thanks to the Arcam’s deft, insightful, and attractive sound. From the perspective of a listener, however, that makes it one of the most satisfying headphone amps you can get at anything close to the price.

It’s hard to think how to improve on the rHead without hitting those mission or price creep buffers. A remote might be nice, but not necessary. Swapping out that wall-wart power supply for something more substantial would effectively double the cost, but due to the amount of internal power filtering in the rHead, the amount of actual improvement that might offer is doubtful. Adding balanced output would be great, but the additional requirements would mean a more complicated design and some switching circuitry… thereby undermining the whole ‘mission creep’ thing. By ‘improving’ the rHead beyond its current capabilities, you would likely end up with a box of tricks that would double the cost and likely add ‘ephemera’ rather than ‘features’.

Forty and a bit years ago, A&R Cambridge Ltd (now better known as ‘Arcam’) launched its first product: a no-nonsense amplifier called the A60 that took the two-channel audio world by storm. The Arcam rHead continues that tradition for the headphone generation. I’m going to stick my neck out here and give the rHead the nod as my take on the best value in headphone amplification right now. If you only need one input and look at balanced outputs, balance controls, or any kind of tone or aural processing as a waste of your time and money, then the rHead is your kind of no-nonsense amplifier. Strongly recommended!