The people at Aavik Acoustics in Denmark must have had a dynamic lockdown. The last time I looked, their electronics were in an aluminium case with radical styling; sizeable central control knobs were a speciality. More importantly, the range was limited to amplifiers, albeit often with onboard phono stages and DACs. The Aavik Acoustics D-580 digital converter wasn’t on the radar at all.

Today’s Aavik range is much more extensive and distinctly uniform, with identical casework used for all components, from phono stages and amplifiers to DACs and streamers, including the Aavik Acoustics D-580. Similar casework across a range is a good idea for several reasons; it lowers cost, and by making them all the same, you get a homogeneity that makes systems look much neater. In this case, it also allows for easy component stacking.

Standardised casework is not a new approach; Naim has been doing it for decades, but they have stuck with metal. Aavik has eliminated aluminium and reduced metalwork to almost a minimum, replacing it with a composite material that looks a bit like well-finished MDF but doesn’t feel like it. For a start, it’s tough and immaculately machined, and it integrates with the metal cross on top like marquetry. 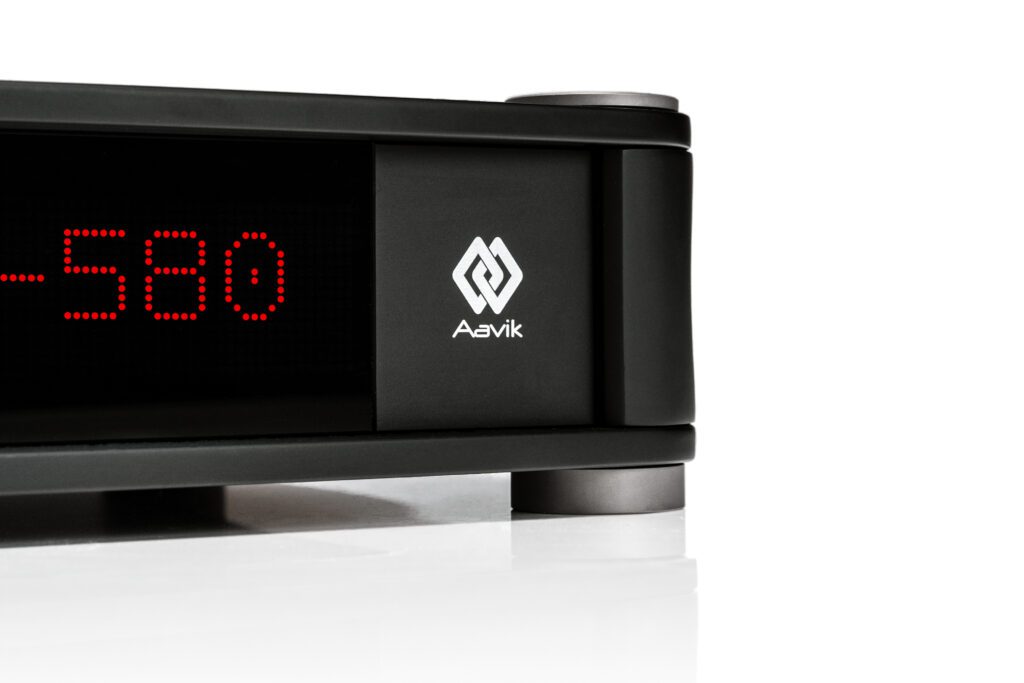 It turns out that the metalwork is titanium, which goes some way to explaining the price. The shape is also significant; Frits Dalmose from Aavik explains, “you will notice that they are shaped almost like an instrument. All dimensions are matched to the golden ratio, and there are no sharp corners.”

I also asked Frits about titanium; it must increase the cost considerably after all. He said, “We have no doubt that the materials used can be heard and that all materials have an acoustic signature. If you get glass to vibrate by hitting it with an object, you have no doubt that you are hearing the sound of glass.” He explained, “When Lars [Kristensen] and I were designing racks – actually the first products to be named Aavik – we tried replacing the aluminium uprights with titanium, and the result was extremely positive.”

The D-580 is the top model in a range of three Aavik digital to analogue converters. Like the Ansuz Power X network switch reviewed in issue 192, the different levels of Aavik DAC are based around the same architecture and features but with more goodies included in the most expensive models. So, the entry-level D-180 has five dither circuits while the Aavik Acoustics D-580 has 11.

The same company makes Aavik and Ansuz, and both incorporate what they call Tesla Coils into their products; these combat electrical Noise (the enemy of good digital sound) and come in two varieties. The D-580 has 108 active Tesla coils and 248 active square Tesla coils. You can see these on an internal shot of this DAC; they are effectively a filter constructed to eliminate the sort of electromagnetic Noise likely to be present with incoming digital signals.

You’ll notice that there are no mains transformers inside this DAC, and this is because it, like all the new Aavik electronics, has a switched-mode power supply. However, it’s a resonant mode design driven by sine waves rather than the square waves of conventional SMPs. The claimed advantage is that the noise floor is extremely low and further reduced by multiple regulators throughout the circuit. 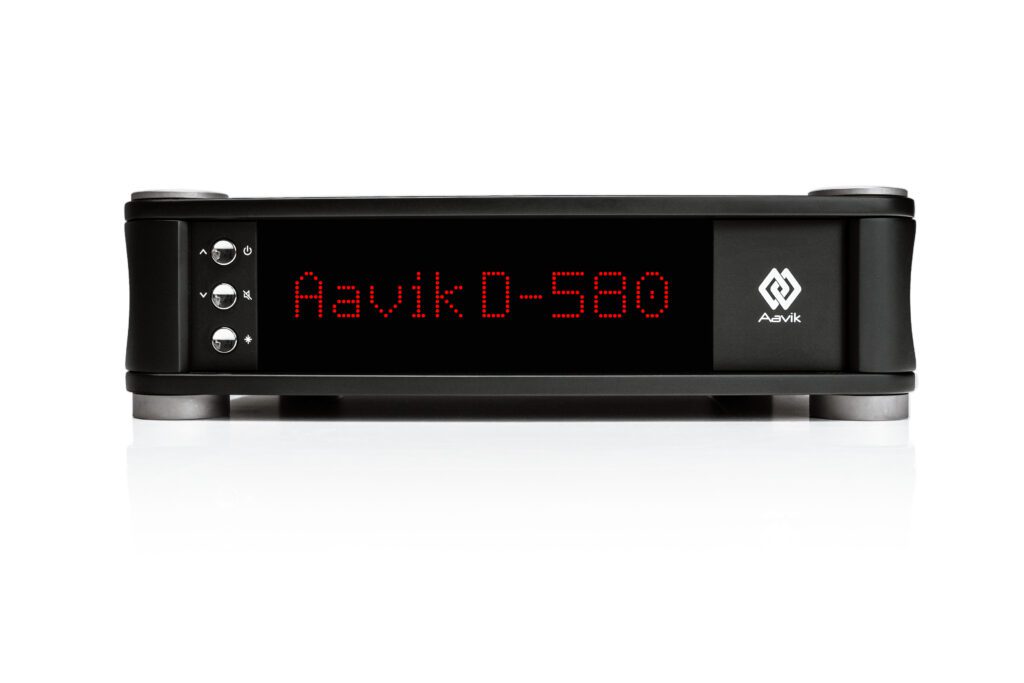 Additionally, the DAC circuit has 13 low noise voltage regulators feeding separate stages of the PCB. There are five digital inputs with BNC connectors on the two electrical S/PDIF inputs beside two Toslink and galvanically isolated USBs; perhaps surprisingly, there is no AES/EBU available. Aavik sends all incoming signals via an asynchronous sample rate converter to be re-clocked to 200kHz/24-bit, all signals except DSD, which bypasses this stage and goes straight to the D/A process.

One final differentiation between the D-580 and its counterparts in the Aavik range is that it’s the only one to have an internal copper chassis enclosing the electronics. Long considered the best shield material, copper is popular among Japanese brands and frequently appears inside high-end digital components.

The USB output of a Melco N10 server/streamer initially fed the Aavik Acoustics D-580, while its analogue signal (through single-ended cables) arrived at another amplifier combo. In this case, through a Townshend Allegri Reference preamp into Bryston 7B3 power amps and thence to PMC Fact Fenestria loudspeakers that happened to be in the system (it’s a hard life etc.). Fortunately, they are highly revealing, and the combination proved unputdownable.

Filtered for your enjoyment

First, though, I had a listen to the various filter options available via the front panel display and Apple remote. Aavik has realised that the Apple IR handset can be programmed and is a relatively inexpensive way to offer a rather lovely aluminium remote.

Of these, I had expected to prefer the slow (roll-off) option, but that sounded more forward and bolder than the fast setting, which had the best timing and thus the most significant ability to engage. Equally important is that it seemed more relaxed, not a lot, though. The settings are clean and effortless, but enough to set it apart from the jazz-rock of Joni Mitchell’s ‘Drycleaner from Des Moines’ [Mingus, Asylum]. 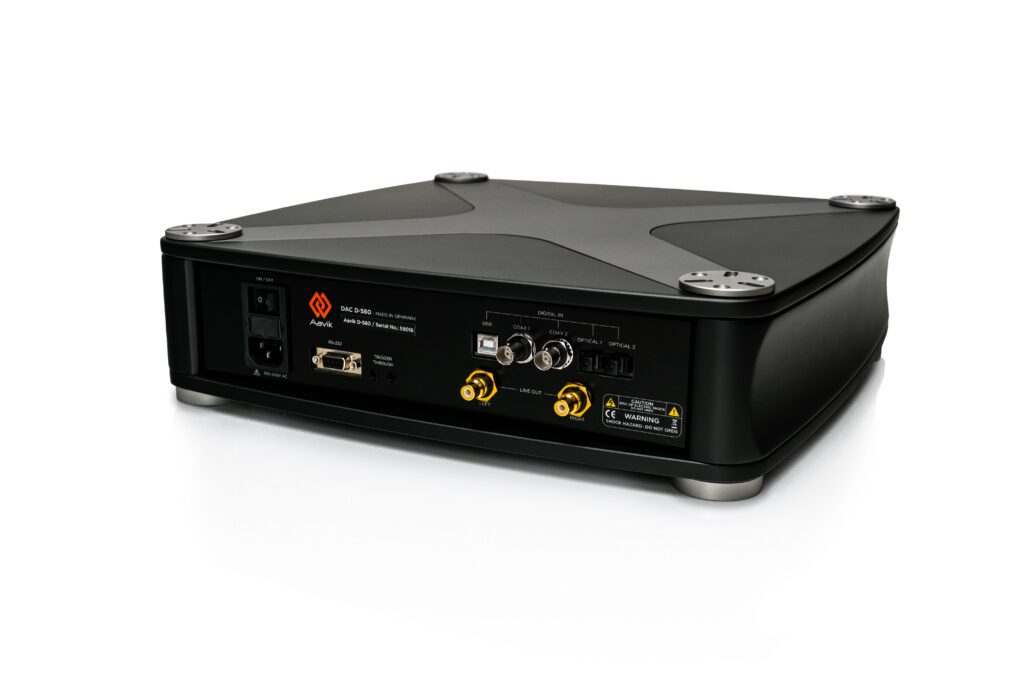 The Aavik D-580 is a supremely open, vital and revealing converter. It delivers an immense depth of image and presents music with all its charms in full effect. I love how it shows the reverb around acoustic instruments. Take Alfred Brendel’s piano on Beethoven’s Sonata Number 1 in F minor [The Complete Beethoven Sonatas, Philips]; it has superb attack and decay with fully rounded and tonally resonating notes into the room. The recording isn’t quite good enough to project the event even via a stonking system, but it’s more than good enough to give a strong sense of the occasion and draw you into the performance.

I was particularly impressed by the breadth of character that this DAC found in the music played; compression, for instance, is hugely different, with some tracks sounding small and pinched yet still managing to project the essential qualities that make it appealing. In comparison, others expand outwards in all directions to fill the room. I would expect such changes, given the differences in production and mastering techniques over the years and how different eras favoured different styles. Still, here the variety was more expansive than usual. Importantly, this transparency does nothing to undermine the music; it just emphasises how it was captured and processed.

I haven’t played ‘Rolling in the Deep’ [Adele, 21, XL] for quite some time; the chorus usually gets hideously raucous, yet compression at ‘max’ doesn’t get in the way of a compelling song. Rarely has emotional trauma been so effectively communicated in purely musical terms; I must admit it brought a lump to the throat. On Macy Grey’s ‘Annabelle’ [Stripped, Chesky], an uncommon example of a significant artist working with an audiophile label, the sound of the small band fills the room, the guitar and voice image like they are there in front of you, it’s a living, breathing live experience.

On Patricia Barber’s ‘Company’ [Modern Cool, Premonition], a track I overuse perhaps, the clarity of voice makes the poignance of the lines “I go to the club, talk through the show, there’s nothing about jazz I don’t know” particularly cutting. This DAC brings out the character of the vocal recording and the effects applied to it remarkably well.

Bring in the Streamer

I also tried the D-580 with an APL DNP-SR streamer between it and the Melco. The addition of the APL produced a significant increase in energy and power, with the bass gaining in stature and the sense of propulsion increasing markedly. It made for one of those ‘which is correct?’ scenarios; the relatively laid-back Melco alone or this more powerful version of events. In truth, the better the recording, the more the APL presentation seemed to appeal.

Aavik’s top DAC is an impressive piece of kit. The D-580’s build quality is first class, and the attention to vibration control has paid off with extreme resolution that sounds far more musical than the oft over-polished results in other high-end converters. I couldn’t pin down any characteristics of the D-580. It was much easier just to enjoy the music.