Now on to the meaty part. The sound of the BRAVURA really does take all the good parts of the Sonoma M1 Headphone, take away all the bad bits, and deliver a sound that at once respects the heritage of what went before while adding much to the parts that were a little wanting.

The BRAVURA treads lightly over the same ground, benefitting from that subtle DSP; that ‘modified pseudo-diffuse field’ frequency response curve, which already created a remarkably natural presentation. Having heard what the Sonoma M1 can do, this was the key ‘if it ain’t broke, don’t fix it’ part of the overall performance and remains unchanged between Sonoma M1 Headphone and BRAVURA. This yields an even greater consistency to a system that is already inherently consistent, but the combination of BRAVURA and the DSP on the Sonoma M1 Amp has an additional level of clarity and tonal precision that most other headphone systems fail to get close to achieving. This comes over as sublime clarity and extension to voices, such as that of Joyce DiDonato [Stella De Napoli, Erato]. Here, she sounds on peak form, which is impressive because she always sounds on peak form, but the BRAVURA just lets her get on with singing with absolute clarity and extension. A true delight… as it was with the Sonoma M1 Headphone. 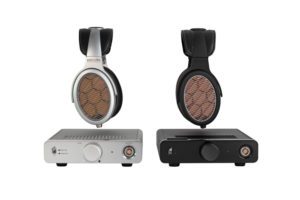 If anything, there is even more clarity on offer. Her voice is so powerful, it can challenge even the most dynamic system on offer, and here her ability to ‘belt out’ an aria is met by a considerably lower distortion system. Her voice is constrained only by the microphone here; the BRAVURA keeps that sound smooth and effortlessly natural, even at some ‘level’.

The big change is in the bottom end. While in the original review, Chris Martens found little to fault with the bass of the original system, I don’t think he listens to as much electronica as I do, and a spot of Squarepusher or Mogwai through the Sonoma M1 highlighted a truncated low frequency, arguably to the point where you could argue the Sonoma M1 Headphone ‘didn’t work’ with deep bass and the music that exploits that bass.

The BRAVURA nails this low frequency aspect. There’s close to an octave more depth to this headphone compared to its predecessor. Undistorted low frequencies are going to be something of a new thing for many listeners; we’ve long been used to a bit of port noise in loudspeakers or headphones changing their tonal balance as the beats go down and the volume goes up. None of that happens here; instead you have clean, articulate, dry sounding bass; not overbearing unless it’s called for; such as the low rumbles on ‘Chameleon’ [Trentemøller, The Last Resort, Poker Flat] fill the soundfield with menace. Oddly given this music is all synthesis, that menace takes on an organic, natural quality through the BRAVURA. Bass might not have the artificial ‘bounce’ that a wooden box does so well, but a few seconds with the BRAVURA shows what you are losing to gain that ‘bounce’.

The two other big feathers in the BRAVURA’s cap is greater headroom. I’m tempted to say the BRAVURA has performed wonders here, and added some more volume headroom than before. The BRAVURA is more of a headbanger than the Sonoma M1 Headphone could ever muster, but the headphone still isn’t the kind that will leave you waiting for your ears to relax after all that pounding music. The BRAVURA can play loud; louder than before, but not tinnitus loud, and that could be a good thing long term in terms of ear-saving.

Above all, though, where the BRAVURA does shine is in extending the performance of the Sonoma M1 Headphone. There’s a sense of ‘totality’ or especially a ‘gestalt’ where the process of scrutinising individual components of the sound are swept aside by the whole. The Sonoma M1 was already excellent in this field. Now it’s outstanding because it has greater reach, both in frequency extension and volume level.