Calling a cable brand ‘VooDoo’ is at once asking for and shutting down trouble from audio’s Angry Brigade.  Those who think audio cables are all voodoo anyway are going to be angered by the name because they can’t be angry about it. It’s up there with the Heart Attack Grill, but with less risk of atherosclerosis. In fact, VooDoo Cable is relatively open about its construction and product development and no chickens were sacrificed or zombies were raised in the making of these cables.

Instead, VooDoo Cable goes with good quality conductors (primarily high-purity copper and silver) with silver-plated copper braid shields and Teflon dielectrics. The components that go to make up the company’s cables are all cryo-treated in VooDoo’s own “computer-calibrated cold-fusion liquid nitrogen deep-immersion cryogenic process.” These component parts are then wound to length by hand in VooDoo’s own engineering shop. 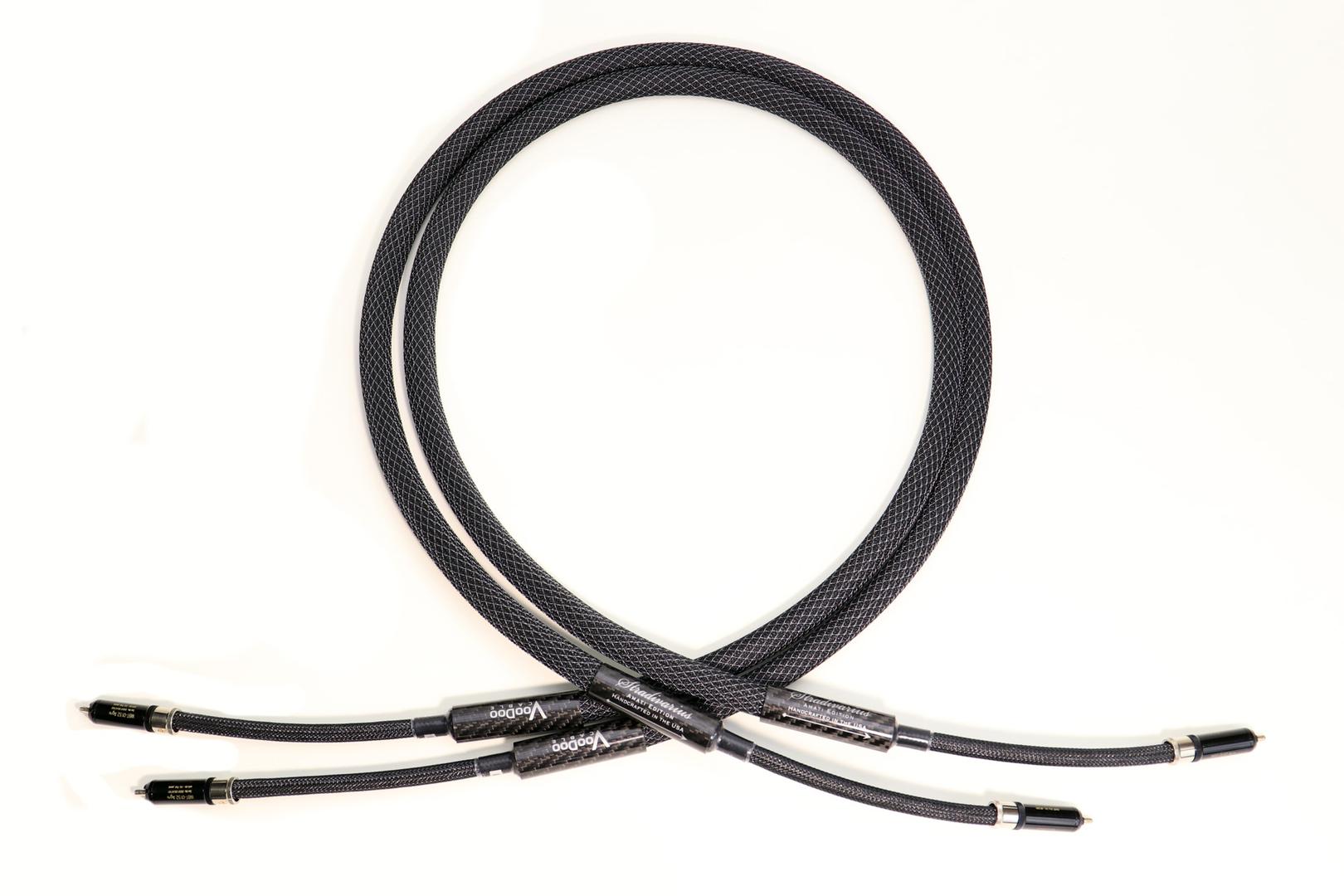 The cables themselves are offset and enhanced by a catalogue of the best and brightest stars in the audio firmament, featuring Cardas, Wattgate, Furutech, and Hubbell connectors where relevant. In addition, every cable supplied is given a full machine polish and given the Caig contact treatment spa treatment before dispatch.

We picked a selection of some of VooDoo’s more up-scale ranges, with two sets of power cords from the Dynasty range, and signal cables from the Stradivarius Amati line. I guess any cable that is named after not one but two Cremonase violin-making families and a 1980s TV series with Joan Collins must be good!

The Dynasty power cords are of similar size and weight, but designed for very different use; the Dynasty Digital is best used for (as the name suggests) digital audio components, and low-power products like preamps and phono stages, where the Dynasty Power is designed to partner beefier power amplifiers. VooDoo suggests the power cord is the most important and sonically-influential cable of the lot, and judging by the performance, VooDoo has a point.

I dislike the whole ‘lifting veils’ cliché that permeates high-end audio, but it’s there for a reason; sometimes it’s the best description of what happens in an audio system. And in plugging the Dynasty Digital into a range of line-level components (from streamers to preamps), that ‘lifting veils’ cliché rang true time after time. As it did with the Dynasty Power. The sound was better defined, clearer, the system more transparent… and veils were lifted. VooDoo also claim the cable can lower heat dissipation in amps, but I didn’t find this.

On to the Stradivarius Amati. The interconnects are a Litz wire design, with pure-cast silver and high-purity copper solid-core conductors, with oil-impregnated silk in Teflon insulation. The loudspeaker cables share the same grade of material but are laid into seven distinct conductor groups. And if we used a cliché of lifting veils for the power cords, the signal cables adhere to the ‘it’s silver, so it’s detailed’ canard. But they are incredibly detailed, with lots of top-end energy, but in a detailed rather than outright bright way. They are exceptionally good at resolving the structure of music from top to toe, but especially good at making high-frequencies detailed without being bright or hard sounding. It’s about extension and refinement rather than zing and immediate, crowd-pleasing. This was best expressed by listening to Mahler’s Das Lied Von Der Erde, perfectly sung by Ferrier way back in 1952 [Decca]. Her impeccable phrasing, her contralto voice, and the orchestration all work together perfectly, but require a system of great poise. If the system isn’t working beautifully and has any idiosyncrasies in the upper registers, you quickly become aware of the age of the recording, but if the system works, the music is truly masterful, as is the case here. 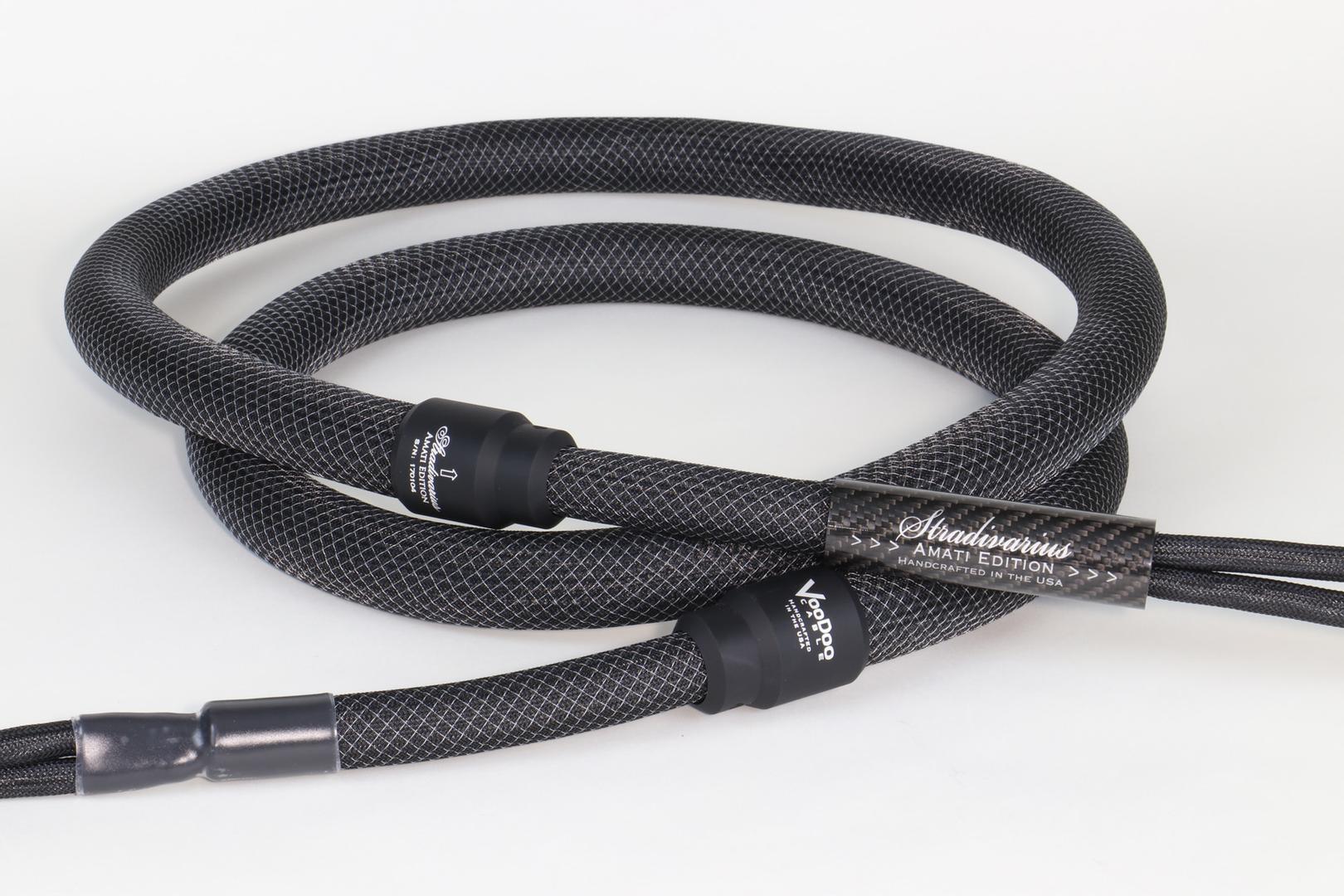 Best of all, however, the two somewhat disparate voicings of each VooDoo cable combine with good synergy. You get the feeling of a well-oiled machine at work. If pressed, I would be a little more taken by the performance uptick of the power cords than the signal cables, but there really isn’t a lot between them and as they work together so well, singling out one at the expense of the other seems a little pointless. The musical example that best highlights this cooperation between power and signal is John Coltrane’s A Love Supreme [Impulse!]. Not only did I play it louder and longer than usual (I find the tone-poem gets a little cloying by about half-way, a confession that will see me drummed out of the Jazz Cavalry), but I found the themes and improvisation to flow and speak to me more clearly, and the soundstage took on real depth too.

Perhaps the big bonus of the VooDoo cable line-up tested here when used as a family was they presented an air of increased believability in the sound produced by my system. Then I tore apart the system for a new product, and they brought the same believability to that next mix, which suggests VooDoo Cable are as consistent as they are good sounding. It’s not hard to like the voodoo that they do so well.

Distributed in the UK by: Mackenzie Hi-Fi