In hindsight, attempting to cover an audio show while recovering from (albeit mild) pneumonia was possibly not my best move. As a result, what should have been a complete report of a whole event quickly turned into a morning of gasping for air. Nevertheless, in spite of the occasional paroxysm of coughing, the inability to walk more than 10 paces without having to grab hold of something, and ruining a few demonstrations by making a sound not dissimilar to throwing a bull walrus through a jet engine, the exercise was more than worth it, because there were several rooms that made a fantastic sound, and some outstanding new products.

Naturally, because of my limited capacity at the time, this is a somewhat truncated report, and because of the need to actually recover properly, this report arrives ‘somewhat’ after the event, but this in no way undermines what is proving to be an outstanding show and the only true high-end event on the UK calendar now. That this show is organised by one of our rivals – Hi-Fi News & Record Review – is immaterial, and credit where credit is due; this fine show is a result of the dedication and tireless energy of the magazine’s Editor, Paul Miller. If I had more lung function at the time, this report would be three times as long, and still full of exciting new products. My apologies to those who I should have seen, but for whom I just (literally) ran out of puff. 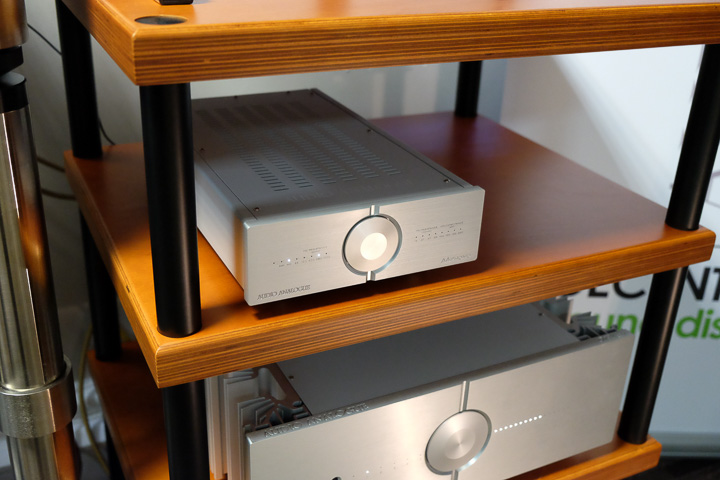 Decent Audio showed that a big system doesn’t need to be big all over. With the epic Kronos front-end (complete with Transfiguration cartridge) and a pair of awesome Raidho D-2.1 floorstanders, you might expect something very high-end in-between. In fact the company used the latest £7,000 Anniversary edition of the Audio Analogue Maestro integrated amplifier, complete with the £1,600 AA Phono from the same brand to keep it company.

The KEF LS50 Wireless was demonstrated, in part to show off its new Roon capabilities, part to showcase the new ‘Nocturne’ finish by Dutch designer Marcel Wanders. Given a musical notation theme, the design is finished in elements that glow under UV blue light. Depending on your viewpoint, this looks elegant and refined, or it had “a face like a painter’s radio!” as one wag was heard to utter. At least, I think he was talking about the LS50 Wireless Nocturne… The Nocturne commands a £300 premium over the standard model. 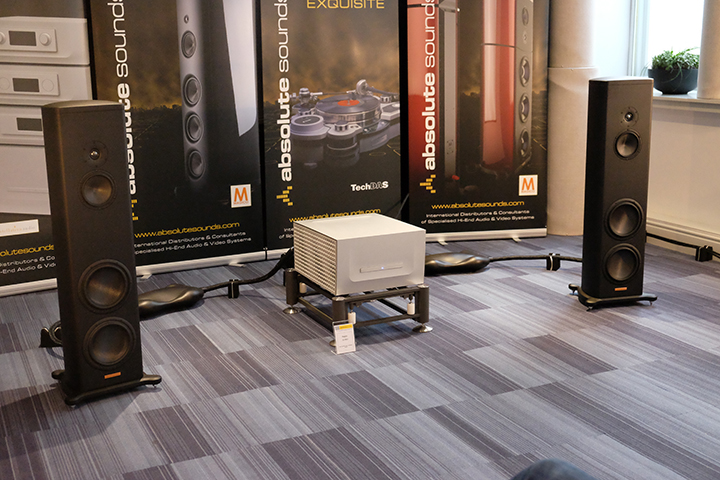 The S3 Mk II is perhaps the ultimate Magico loudspeaker for most European houses. Large enough to deliver the goods, but not so large as to make them impossible to install in all bar the largest houses. Couple this three-way design with Constellation’s Centaur Stereo 500 from the Performance series, with the Andromeda line preamp and Pictor Phono stage from the Revelation series, and both a Kalista digital and TecDAS analogue front ends, and this was a system with grace, space, and pace… and a lot of power. 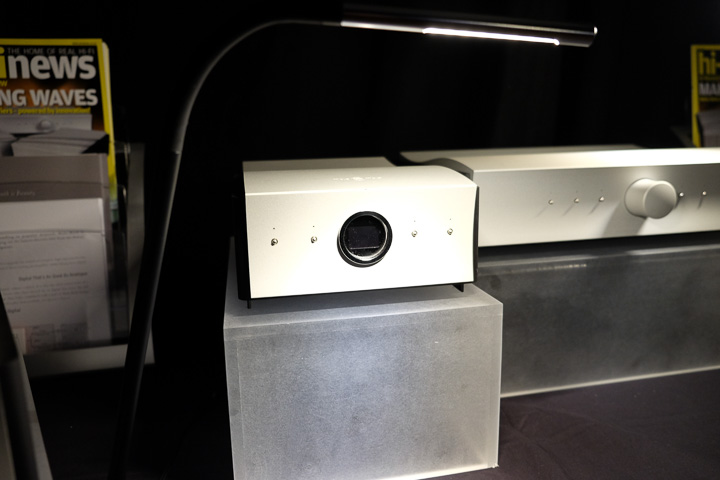 Mola Mola’s reputation is built around high-quality Class D amplifiers. The Tambaqui is the company’s new DAC, and is essentially the discrete DAC from the Makua preamplifier in a standalone case. Featuring a total of three SHARC chips, and separate PCBs for left and right channel analogue conversion, the Tambaqui also the full gamut of digital inputs and a balanced analogue output. It supports PCM up to 32/384 and quad-speed DSD. Price is to be confirmed. 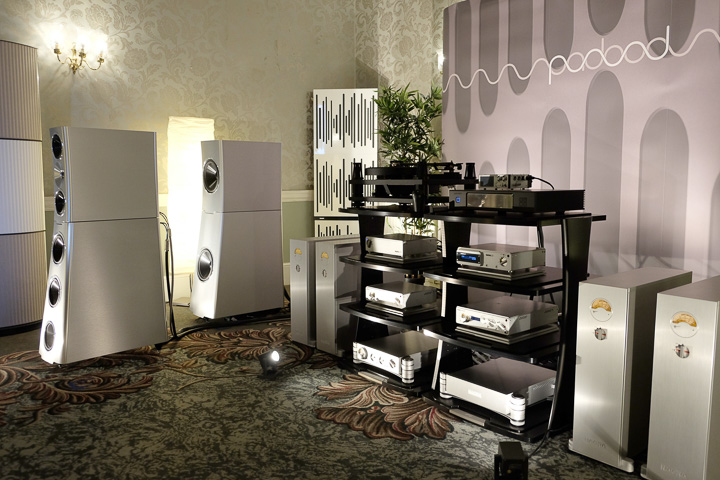 I had been notionally invited as a guest of Padood because the company said it had ‘something special’ lined up. They weren’t wrong. The main system, comprising an SME 30/12 turntable, with a SME V-12 tonearm, and the new Shelter Harmony cartridge, running into a Nagra VPS on the analogue side, a Nagra CDT CD transport and Aurender N10 music server running into the Nagra HD DAC. Amplification was the brand new Nagra HD Preamp, with a pair of Nagra HD power amplifiers, into the new YG Acoustics Sonja XV Jnr system. Cabling throughout was Elation! by Kubala Sosna. The total cost for this bespoke system was about one and a half Savile Row suits shy of £500,000! This system sounded remarkably good; good enough in fact that they had a guitarist called Joncan Kavlakoglu effectively accompany himself live vs. recorded and the two were indistinguishable. 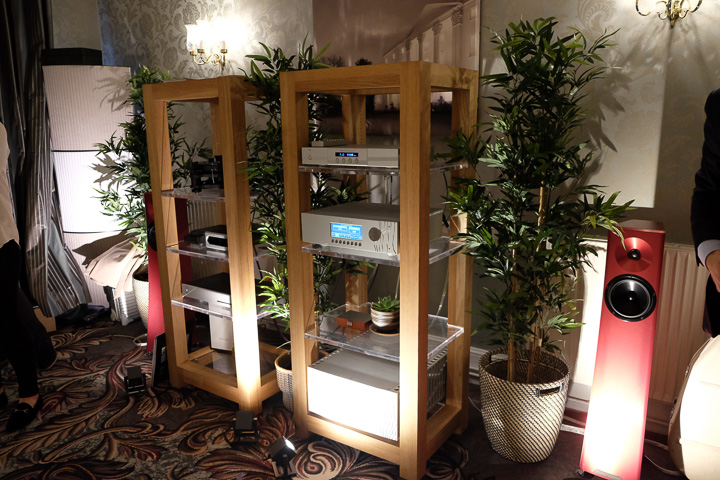 Padood also ran a more ‘modest’ system comprising SME Model 15 turntable, 309 tonearm, EMT S75 Black cartridge, and the new Bel Canto e.One phono stage on the analogue side, the Bel Canto e.One CD3t CD transport, Weiss MAN301 network player, and Weiss Medus DAC digital converter on the digital side, the all new Boulder 1110 line preamp and matching 1160 power amp for amplification and the popular YG Acoustics Carmel 2 floorstanders, all playing through Analysis+ Silver Oval cable. OK, so ‘modest’ still weighs in at well over £125,000, but this too was capable of much. Coming after the outstanding larger system, it was a tough act to follow, but it did follow exceptionally well. 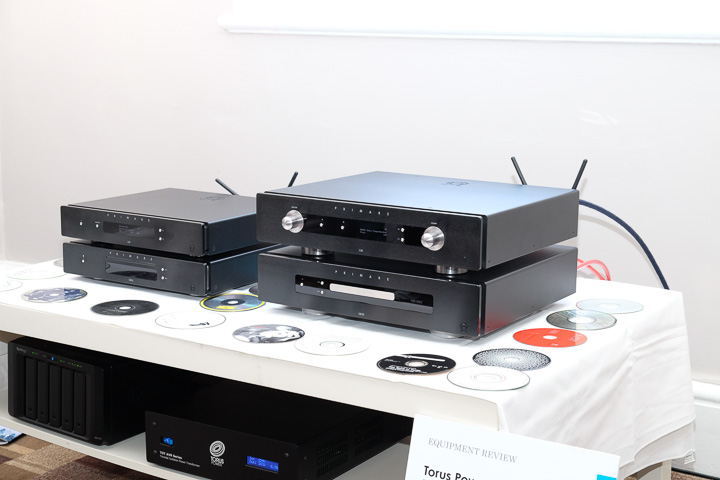 After a long gestation period, we are finally getting to see the new Prisma range of electronics from Scandinavian audio electronics experts, Primare. Here we got to see and hear two sets of products from the new range, in two system levels: A prototype of the new CD15 and £1,500 I15 models from the entry-level of the brand and the more up-market £2,750 CD35 and £3,900 I35. These were also streaming music from a NAS and making some very fine sounds into a pair of mid-level Revel Concerta M16 loudspeakers. 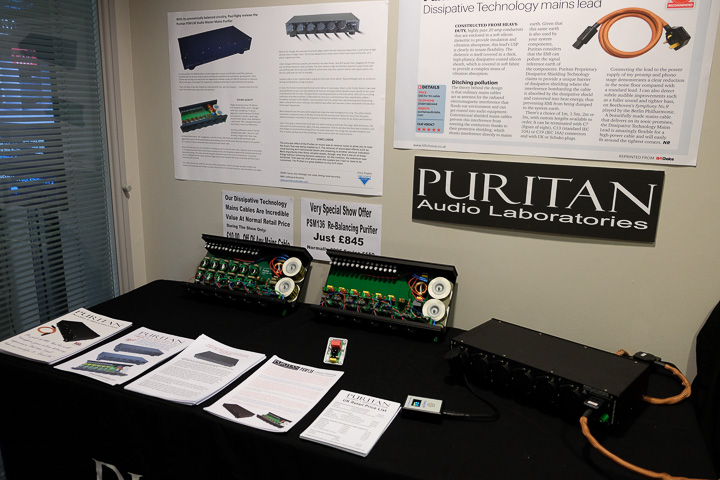 The UK-based power experts Puritan announced a new £1,450 PSM156 Studio Master Mains Purifier. Building on the strengths of its already highly prized PSM136, the new 156 takes the six individually fused 8A outputs of its older brother, and by effectively doubling much of its internal architecture allows for six unfused 13A outputs, in the process increasing the cumulative purification. 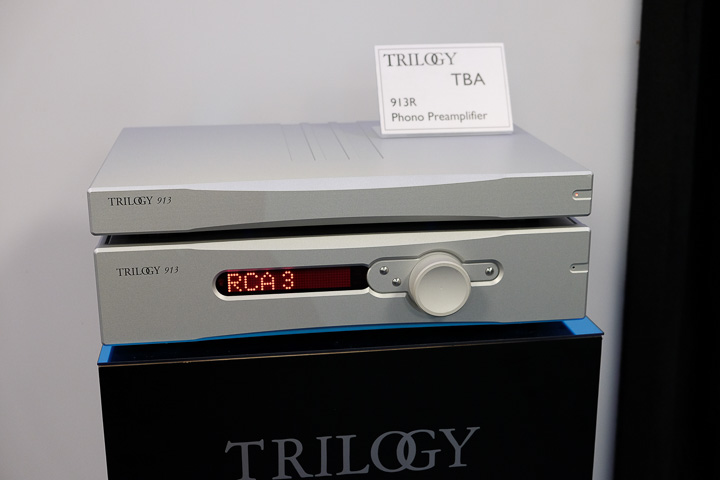 UK based electronics brand Trilogy is expanding its top-end line of amplification, as seen in the Symmetry room. Extending its flagship 900 series, the company showed late model prototypes of its 995 hybrid mono power amplifier, and an early prototype of the upcoming 913R two-box phono stage. The prices on both are to be confirmed, but they are likely to be in the thousands rather than hundreds, or hundreds of thousands! 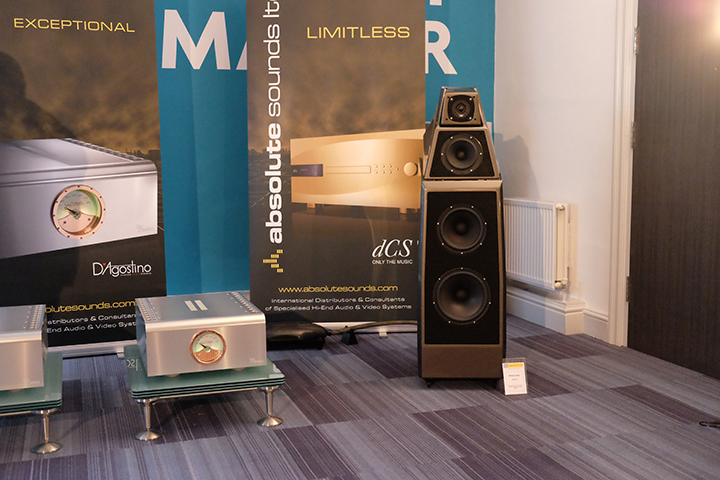 The Hi-Fi Show was the European Launchpad for the Wilson Audio Alexia II floorstanders, in a sublime system comprising D’Agostino Progression preamp and mono power amplifiers, all being fed from a dCS Vivaldi One. The new speaker design builds on Wilson’s ‘most successful speaker’, with a new tweeter, more amp-friendly crossover network, increased internal volume of both the midrange and bass cabinet, and the results were impressive!