The TTT-Slim and Simplicity II combo can be had with full arm wiring or with plinth mounted RCA outputs, I reviewed the latter and used Townshend Fractal interconnects. Thales supplied an X-squisite CA, this is a moving coil cartridge with a micro ridge stylus on the end of a single piece or monobloc cantilever and coil body. The main cartridge body is made of wood and aluminium and the coils themselves are pure copper. 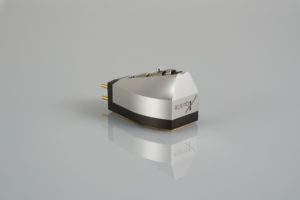 Setting up the Simplicity II arm is eased by the provision of a counterweight that’s designed for this cartridge but what’s unusual about Thales twin arm arrangement is that it doesn’t inherently provide the same tracking weight at all points across the record. You need to check both inner and outer downforces and rotate the rearmost part of the counterweight to compensate; it was necessary to turn it such that the mass was entirely on the inside to offset higher downforce at the centre of the record. I also used the azimuth adjustment to make the cartridge vertical above the platter. The platter itself is covered with a smooth rubber like material and this combined with the optional non-threaded clamp ensures that the vinyl is well damped.

Live recordings are delivered with a strong sense of scale and image depth and the better studio productions can sound superb. Joni Mitchell’s Mingus [Asylum] being one clear example where everything sounded spot on, the voice stood out with beautiful tone and nuance and it felt as if you could hear right into the studio. Making it particularly easy to appreciate the efforts of the various top notch musicians Mitchell gathered for this project; Jaco Pastorius, Herbie Hancock, Wayne Shorter, Peter Erskine being the best known but even the percussion playing is in the top flight. All of this is revealed by the way that this Thales record player shows you not only what and how each note is created but, equally important, ensures that those notes stop and start precisely and allow what artists call the negative space, the quiet between notes to be clarified as well. I forgot to put the clamp on initially with this album so got to hear the way it solidifies the bass and adds definition to leading edges when it’s added. On some turntables clamps are not always beneficial but here it brings obvious increases in resolution.