T+A’s awesome HV electronics are mighty beasts, but like most might beasts in audio, they are not exactly ‘cheap’. You do get your money’s worth with the HV series amplifiers, but you still need a lot of money in the first place. In an ideal world, there would be an amplifier that uses a lot of what makes those HV amplifiers so good, at a more affordable level, and that’s precisely where the AMP 8 comes in.

The AMP 8 is part of T+A’s two-strong smaller form factor products, the other component being the DAC 8. It’s logical to think of the two as a pairing, with the DAC 8 as processor and digital preamp hub and the AMP 8 as ‘just’ the power amplifier. Which is why we broke them apart like this. The AMP 8 is pretty far removed from being ‘just’ a power amplifier, and its small case and top line 2× 80W into eight ohms, 110W into four ohms specification might easily make it an afterthought in any review of the pairing. In fact, what the AMP 8 does is provide the perfect ‘straight wire with gain’ style power amplifier for any sophisticated system builder who is not keen on spending tens of thousands on a stereo power amp.

The overall circuit design of the AMP 8 is very similar to the German company’s PA 3000 HV integrated amplifier, in that the input and voltage amplifier stages operate at much higher voltage potentials than usually found in domestic amplifiers. In the case of the AMP 8, the input stage is a cross-coupled J-FET cascode amplifier, while the voltage amplifier stage is a single-ended Class A FET cascode amplifier, of a design first thought up by Dr Malcolm Hawksford, Emeritus Professor of Engineering at the University of Essex. In a high-voltage amp design like this, the output stage is responsible for current amplification, and the AMP 8 sports high performance ‘ThermalTrak’ audio-specific transistors designed for bias point stability and freedom from inertia effects.

Another T+A innovation, the voltage and current amplifier stages are completely separated from one another, even to the point of not sharing the same power supply. This is more than just electronics overkill, it prevents any feedback from the loudspeakers affecting the more sensitive and sonically vital voltage amplifiers. This circuit design is known as an Isolated Current Amplifier (ICA) circuit and has been used by the brand for several years, and was first seen in its R-Series. This inherent isolation of individual stages makes for an amplifier with low circuit track inductance, and a design that doesn’t need high levels of global negative feedback to create a linear, wide bandwidth amplifier, and this is evidenced by the AMP 8 having a bandwidth of more than 200kHz.

The amplifier features an over-specified, low-field leakage toroidal transformer, claimed to generate up to 400W and this, coupled with a large local capacitive reservoir across the output stage acting as buffer, means this relatively small amplifier can deliver a surprisingly powerful sound to surprisingly difficult loudspeaker loads. Naturally, the T+A bristles with high-grade electronics components including non-magnetic Vishay resistors and high quality WIMA and ELNA audio-grade capacitors. There is also a down-firing case fan, which remains silent until needed under duress and even then runs slow and quiet enough for it not to be troublesome for listeners.

In a way, despite the fact the AMP 8 costs about one-seventh the cost of the HV designs, there is a lot of HV gene pool inside this amp. The way it keeps the costs down is more to do with simplifying the design rather than significant compromise, so the AMP 8 places the entire amplifier circuit on a single board instead of the mother/daughter board layout in more upscale designs. Yes, in absolute terms this does slightly compromise ultimate performance, but you would need to be up at the HT level even to hear such compromises, so this is an entirely relevant way of keeping costs down.

The AMP 8 is signal sensing, and very quick to sense a signal, too. So it will sit there perfectly contented until something electrical comes down the phono cables and will then spring to life almost instantly. Unless you are determined to hear that abrupt first opening drumbeat of REM’s ‘It’s the End of the World As We Know It’, the AMP 8 will spring to life. It’s sensitive enough to wake up even at the turn of a passive preamplifier, and this combination is something well worth considering. It will power down after 20 seconds of no signal. There are also options for triggering the AMP 8 using an external trigger voltage, or – obviously – the DAC 8.

The amp is small and purposeful looking, yet has provision for both XLR and RCA inputs (don’t be ‘clever’ and use both inputs to try and make one amp serve two masters – the auto-sensing circuit doesn’t take kindly to cheaters) and has a set of very nice WBT style five-way speaker terminals as standard. From the front, though, it’s just three LEDs denoting power on status, play mode, and whether the speakers are receiving signal – a blinking LED at this point denotes either short amp warm up or something darker at play. In fairness, though, this is possibly one of the most unburstable amplifiers out there, so the blinking LED is invariably gain stages warming up for a few seconds. 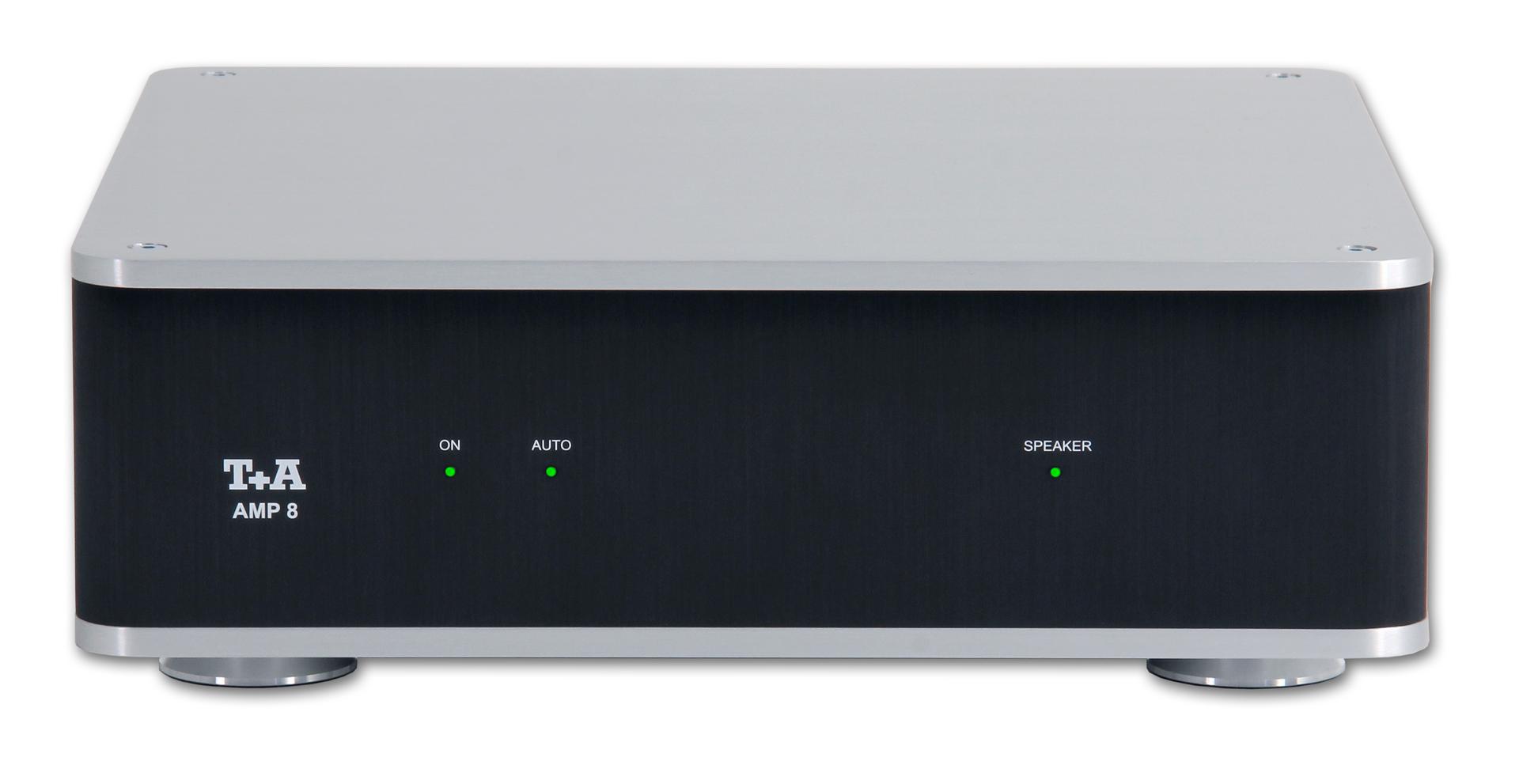 I’m drawn to the inevitable comparison with classic Quad power amps like the 303. The AMP 8 is a lot more powerful of course, but it has the same intrinsically ‘right’ sound and build quality that keeps the 303 in circulation and still commanding fair prices when they come up for sale. In Quad speak, both amplifiers are attempts at that notional ideal of a ‘straight wire with gain’ although maybe the Hippocratic Oath is more accurate: ‘first, do no harm’. This is exactly what you want from a power amplifier – sources, preamps, loudspeakers, even cables can add a flavour to the sound quality of a system, but a power amplifier should do nothing more than amplify. Of course this is an oversimplification, and if this were the beginning and end of the amplifier quest then valve amps would disappear overnight. But, notionally at least, the power amplifier should influence the sound less than other devices, and this is what the AMP 8 does so well.

An amplifier that does nothing and does it right is not the stuff of exciting reviews, because it’s like writing about the different tastes of spring water. But there are aspects of amplifier performance where many fall short and the AMP 8 shows their limitations. Dynamic range is one of the most noticeable improvements the AMP 8 has over many of its rivals. The amplifier simply has better dynamics than its rivals. Not heaps better, and there’s no sense of ‘inky blackness’ and lowered noise floors. It’s just that, in playing Shostakovich’s Fifth Symphony [Haitink, Concertgebouw Orchestra, Decca], the sense of high drama in the opening bars is played more to the limit.

This track also highlights the excellent transient response of the AMP 8. Shostakovich is not something to be taken lightly and any diminishing of the force of the orchestra, whether in terms of leading edge attack or the weight of the playing, undermines the intensity of the piece. The AMP 8 – in the context of an excellent and matching system – retained this energy and the fast attack and decay needed to cope with an orchestra at full stretch made this a welcome addition to the home system. In all other aspects, that ‘first, do no harm’ approach pays off, because in all other perspectives the amplifier is simply doing its job without exaggeration or diminution. This is a good amplifier! 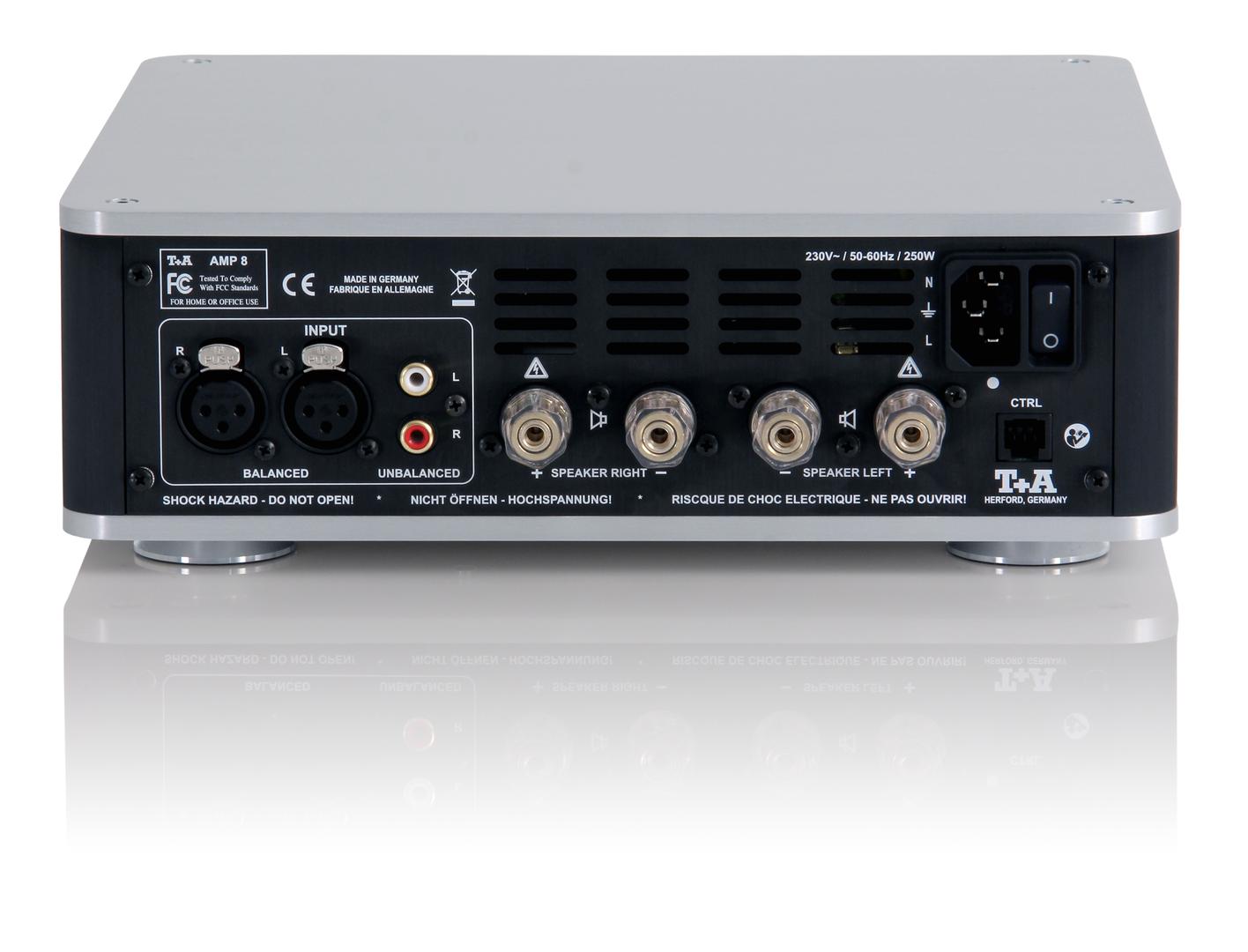 You need to make a considered buying decision when thinking of the T+A AMP 8 as your next power amplifier. Many use a paper-thin excuse of the amplifier ‘getting on in years’ to spark the search for a new amplifier every four or five years. This isn’t that sort of amplifier. It’s built to last and last, and that excuse simply won’t wash. If you buy this amplifier, it’s a decade long commitment to a design that will not age, falter, materially change, or in any other way fall to bits for the next two dozen years at least. To me, that’s a highly attractive prospect, but I know people who change equipment with the seasons and they will find this unbreakable nature challenges their decision making process. Recommended for the long game!

Distributed in the UK by: Kog Audio Ltd

The all-valve phono stage has long been reborn, but Allnic Audio takes what's best about the past and mixes it with the latest in manufacturing techniques, to make something altogether special!