To maximise benefit without ending up with a loudspeaker that costs significantly more than the base model, only the front baffle of the LS3/5A SE is made from Panzerholtz. This also facilitated an investigation into what benefits the last half century of electronic engineering might have on the crossover network, and the R1 and R2 resistors in the crossover are of a higher grade (but the same values) than the BBC circuit specifies. Such is Rogers commitment to the LS3/5A, however, that everything else remains identical to the specifications laid down more than half a century ago. And if you want absolutely identical to the original – right down to recreating something close to the original Gold Badge of mid-70s Rogers speakers – you can get that too.

The SE invites a bit of a musical conundrum though. The Keepers of the Flame will likely reject the SE version without ever listening to it. Those who want a LS3/5A because they have heard it can sound good will –hands down – prefer the SE in a straight comparison. It does everything the LS3/5A does, but with a little more pep in its step. Dynamic range is wider, soundstaging is deeper and more open, the sound is lither and music flows effortlessly, and the overall sound has a bit more of a rhythm to it. Those who think the piano tone of a LS3/5A is sweeter than the real thing will find the SE is more like an actual piano. And yet, all of these changes do not undermine the basic LS3/5A presentation; speech is still world-class, and that more accurate piano sound just sounds more like it gave up artificial sweeteners.

One of the big changes sonically is in terms of soundstage size and the ability for the loudspeaker to ‘disappear’ in the room. Typically, the smaller a loudspeaker gets, the closer it gets to a point source, making for superior soundstage properties. The LS3/5A has long had that advantage so it’s soundstaging was never less than ‘excellent’, but the SE version makes that soundstage both wider and deeper, and present a more focused ball of sound between and in front of the loudspeakers. This is most telling in the trail off from ‘I Capuleti e i Montecchi’, Act 2: “Tu sola, o mia Giulietta… Deh! tu, bell’anima” from the Stella Di Napoli album by Joyce DiDonato, [Erato]. Gradually the orchestra fades to just her voice and a beautiful bit of French horn playing, and the two ‘instruments’ sit perfectly in a three-dimensional space that just makes the sound that bit more enticing.

Perhaps just as importantly, the SE version makes the LS3/5A start and stop faster. Often typical LS3/5A music programming doesn’t really challenge a loudspeaker’s transient delivery, as a lot of speech and classical music is quite legato in reality. So for this test, it’s best to really push the Rogers loudspeaker to the edge of its comfort zone… ‘Becoming Insane’ from Infected Mushroom’s Vicious Delicious album [World Club Music]. When the fast back-beat kicks in, the speed and precision of the SE responds accordingly. Original LS3/5A models tend to be slightly behind the beat, but because that Panzerholtz front baffle is so inert, the pace of the sound is markedly improved. 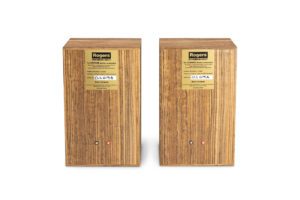 The SE doesn’t radically change the LS3/5A. It doesn’t add octaves to the bass, doesn’t make a low-sensitivity design with relatively limited amplifier headroom suddenly become a party loudspeaker… but if it changed these things, it wouldn’t be an LS3/5A, and I’m both aware and conscious that this name game is sailing close to philosophical noodling. The point is, just that relatively simple change to a Panzerholtz front baffle makes the LS3/5A SE a better loudspeaker without undermining what makes the LS3/5A a great speaker to begin with. While that will fall on deaf ears to some, I suspect many will feel this the right balance between ‘preservation’ and ‘performance’.

Finally, there are two parts to this story. The Panzerholtz stands designed for the SE are expensive but are a worthwhile upgrade to any existing LS3/5A. Compared to a pair of old but trusty Kudos S50 stands that have regularly been pressed into service to support BBC loudspeakers, the improvement is astonishing, in a ‘Playtex’ kind of way (it lifts and separates the sound). Vocals – which are the original reason for the LS3/5A’s existence in the first place – are better projected into the room and are even more articulate. Listening to BBC (of course) Radio Four newsreaders and continuity announcers is an acid test of a loudspeaker because they are perhaps the best annunciators around and if you listen regularly, a known source. Even the mildest deviation from fidelity comes through as too much chestiness, slight emphasis on sibilants or even a mild ‘spitchiness’ to the midrange, and the loudspeaker stand ensures those elements are dealt with thoroughly. I think the stand is a mandatory ‘must include’ for LS3/5A owners, whether or not that loudspeaker has a SE suffix. It might also be a ‘must have’ for owners of post-LS3/5A designs like the Spendor Classic 4/5 or the Harbeth P3 ESR, but I didn’t have a pair of either to test.