Those of you who have followed Hi-Fi+ over time know that we hold the Scottish firm RHA Audio in high regard as a manufacturer of sensibly priced high performance earphones, many of which have been reviewed in our pages. But interestingly, the RHA product we will review here isn’t an earphone; instead, it’s an ambitious, portable high resolution DAC and balanced output headphone amplifier called the DACAMP L1, priced at £399.95. Truth to tell, the DACAMP L1 has been a very long time coming, so that we can remember seeing early working prototypes of the amp/DAC over a year ago at various trade shows. Slowly but surely, though, the DACAMP L1 has made its way to full production and is on the market now.

Virtually everything RHA makes is known for exhibiting exceptionally high standards of fit, finish, and overall build quality, so that it is tempting to forget just how keenly priced RHA products are—especially in light of the performance on offer. The DACAMP L1 upholds and builds upon that same tradition. Accordingly, the design of the DAC/amp is geared, in RHA’s own words, “for those who want to take the full-size hi-fi experience with them wherever they go.” 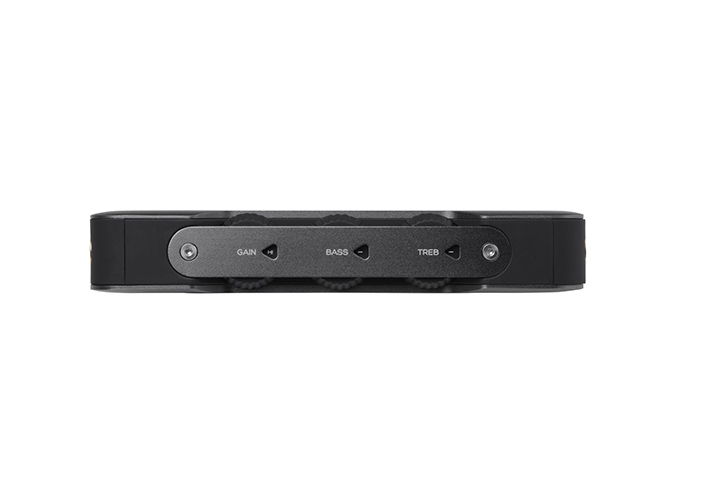 The outer case of the pocket-sized DACAMP L1 is made of aluminium formed through a combination of extrusion and machining processes and is finished in a soft satin grey colour. The edges of the case feature gentle curves that convey a distinctly upscale look and feel, while the exposed sides of the case are done in a soft-feel matt black. Along the longer side of the case is a cutaway recess that houses three control-knobs whose faces are protected by a satin grey aluminium escutcheon plate. The controls are for setting master gain (with low, mid, and high gain settings, plus a ‘charge’ setting), and bass and treble tone settings (each with 12 settings, giving a ranges +9dB to -3dB of boost or cut).

On its rear panel, the DACAMP L1 sports a line in/optical in input jack, an analogue line out jack, a USB A-type jack used for connections to iOS devices or as a charging output, a USB micro-B-type jack used as the digital input for most other types of sources and as charging input, and a small slide switch with settings for iOS in/charging out, USB in/charging in, and to select the line in/optical in input jack. The front panel of the DACAMP L1 in turn features a 3.5mm mini-jack headphone output, a four-pin mini-XLR balanced headphone output, and a laterally positioned and partially recessed knurled thumbwheel that doubles as an on/off switch and as the unit’s volume control. Also on the front panel is a small, multi-colour LED that indicates connectivity, on/off status, and the state of the DACAMP L1’s battery. Topping things off, the top of the unit sports a tastefully engraved rendition of the RHA logo and slogan, which simply reads, “RHA. Sound. Engineered.”

On the inside, the DACAMP L1 offers, says RHA, “a fully balanced configuration.” To this end, RHA adds, “the DACAMP L1 is the first device of its kind to feature dual DACs and amplifiers, with each pair responsible for one channel of high resolution audio.” Specifically, each channel of the RHA unit features its own dedicated ESS ES9018K2M DAC device and its own class A/B circuit implemented, “using ceramic transistors and innovative logic paths.” RHA emphasizes that, “each channel is fully grounded and balanced, eliminating the risk of cross-channel interference and distortion.” The ESS DACs give the DACAMP L1 the ability to decode PCM files at rates up to 32/384 and to handle DSD64, 128, and 256 files.

Obviously, the RHA team set its sights quite high in developing the DACAMP L1, so that the unit plainly was built up to a quality and sonic standard—not down to a price point. But this, of course, leads to the key question: how does the DACAMP L1 sound when used under real-world conditions? To find out, I fed the DACAMP L1 digital audio files sourced from an iDevice (an iPad Air), from an Android-powered Samsung smartphone, and from a Windows/Lenovo/jRiver-based media server. In turn, I listed through a range of earphones, CIEMs, and full-size headphones, including Noble Katana CIEMs, RHA CL1 Ceramic earphones (which we will cover in a separate review later on), ENIGMAcoustics Dharma D1000 headphones, HiFiMAN Edition X v2 and HE 1000 v2 headphones, and MrSpeakers ÆON and ETHER Flow headphones. Here is what I learned.

In almost all cases, the DACAMP L1 serves up a notably clean, clear, and muscular sound that—for the most part—gives the impression that one is listening through a device with much higher output specification than the RHA unit in fact claims. I suspect this may have much to do with the specific gain options RHA has chosen, but also with the DACAMP L1’s very quiet circuitry, which enables listeners to make the most of the power at hand. This point was driven home to me one evening when I listened to a selection of tracks from bassist extraordinaire Tony Levin as played through the RHA as fed through the Pandora app running on my iPad. The RHA DAC/amp synced up effortlessly with the iPad and handled decoding tasks so masterfully that it struck me I had never before heard such superb sound quality from Pandora-source materials before. More importantly, though, the RHA drove the moderately sensitive (97dB) MrSpeakers planar magnetic ÆON headphones I was using with a rare combination of delicacy and authority.

Levin’s punchy and articulate bass didn’t just sound good though the RHA; it sounded terrific (leading, I must admit, to moments when I couldn’t resist playing ‘air bass’ in emulation of one of my musical heroes). Having recently heard the MrSpeakers ÆONs powered by larger and much more expensive amp/DAC combos, I was floored to find that the RHA not only held its own in comparison to more costly competition, but also in some respects outperformed it. These sonic results are greatly to RHA’s credit.

My only critique of the amplifier section of the DACAMP L1 is that, for very high sensitivity CIEMs such as my Noble Katanas, the RHA has a bit too much gain for its own good—even when the very lowest gain setting is used. The RHA’s gain characteristics and volume control taper mean that, on some CIEMs, the line between ‘just barely playing at all’ and ‘playing way too loudly’ is a fine one indeed. For this reason, I would like to see RHA recalibrate its lowest gain setting to make the DACAMP L1 more compatible with CIEMS and the like. Otherwise, though, the amp is terrific.

The DAC section of the DACAMP L1 performed flawlessly though my tests, happily syncing with my iPad, Android/Galaxy smartphone, and with my Windows-based music server, and gracefully shifting back and forth between standard and high-res PCM and DSD files with no hitches or glitches. At all times, the DACAMP L1 delivers pristine clarity and the sort of low-level sonic detail that is only possible with devices that have very low noise floors. The sonic benefits are obvious ones: down low, listeners enjoy superb pitch definition while up high they are treated to soaring high harmonics that just sound ineffably right. And in the middle, human and instrumental voices are handled with unforced transparency and expressiveness.

A good example of this would be the ethereal track ‘Hey Now’ from London Grammar’s If You Wait [Sony Legacy, 16/44.1] as played through RHA’s remarkable CL1 Ceramic earphones powered by the DACAMP L1. The CL1 Ceramics are not easy earphones to drive, but the DACAMP L1 really made them sing on this track, neatly revealing the pinpoint precision of Dan Rothman’s guitar work, the profoundly atmospheric vibe of Dominic ‘Dot’ Major’s almost meditative keyboards, and the lofty, upward-reaching beauty of Hannah Reid’s vocals. With help from the DACAMP L1 and the CL1 Ceramics, the listening experience became deeply moving and inspired a quiet sense of reverence—almost like listening to an electronica or pop-inflected take on evensong as performed in a quiet cathedral.

RHA has another winner on its hands with the DACAMP L1—one that upholds the RHA tradition of offering products that provide great build quality, useful features, and great sound quality, all at a more than fair price.