REL has come a long way since a Welshman started it in search of more realistic organ pipe sounds in his sitting room. Richard Lord sold the company to Sumiko over a decade ago, the now REL staff were involved with Sumiko, who eventually built the biggest Hi End distribution company in the world before said key staff left to purchase and concentrate on further developing REL.

As a result, REL subwoofers or, sub‑bass systems as Richard used to call them, are now sold worldwide. Any visitor to a hi-fi show will have noticed another trend that REL has been pushing – stacking of subwoofers, where multiple subs are used to create a line source. Which, if truly working, must be highly entertaining indeed. 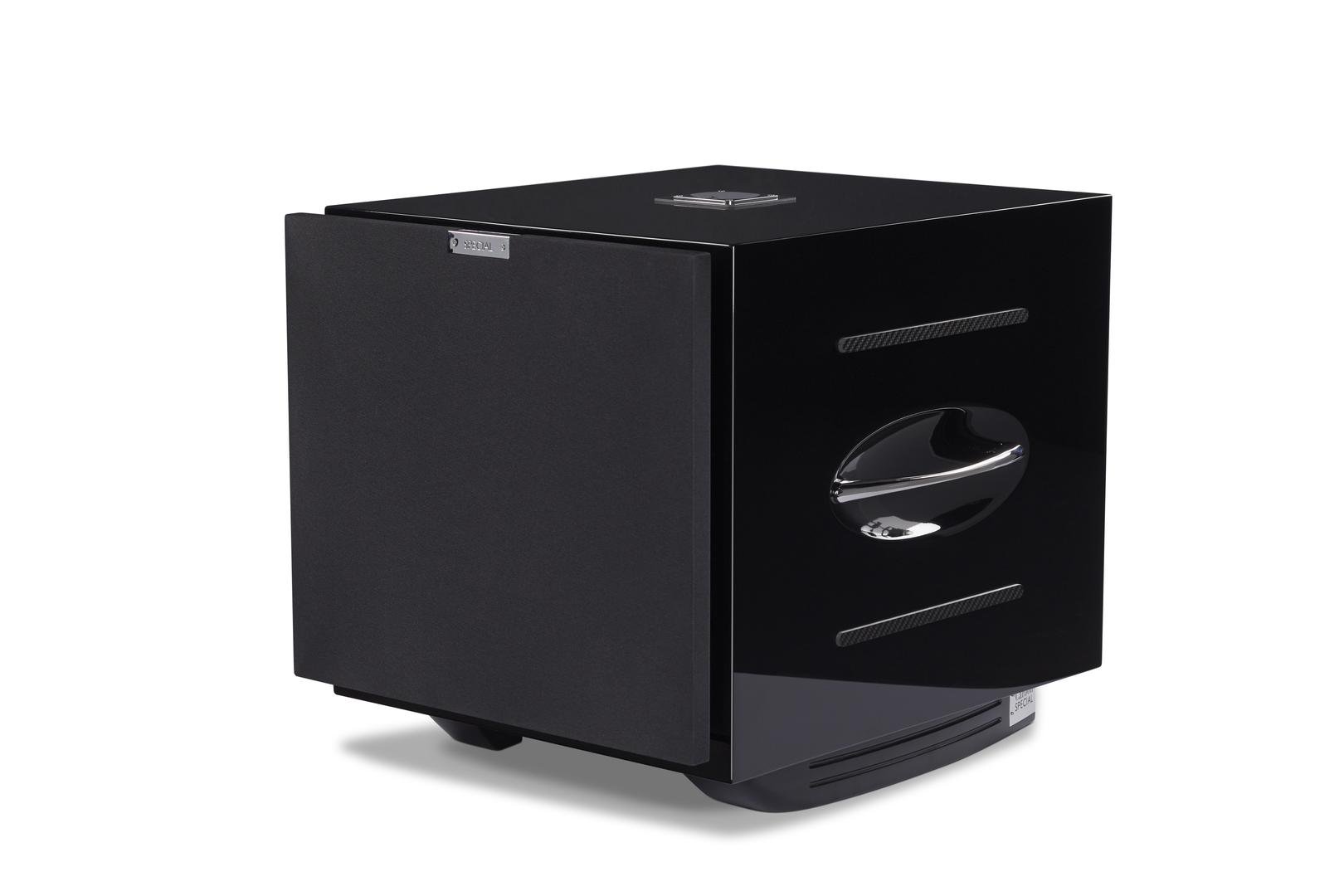 Carbon Special is the latest addition to the line and a good size beast it is, too. Standing 18 inches high and equipped with a 12-inch driver, it is, however, described by REL as a ‘modest size’ unit. Therefore, I am clearly out of the loop when it comes to what constitutes ‘big’ these days. Its shiny black cabinet is made of 65mm thick MDF and features REL’s so-called BlackWidow carbon fibre drive unit (so, whatever you do, don’t mate with it), the material selected for its combination of stiffness and self-damping properties. It has a big roll surround to allow for a massive 100mm throw, with which it is said to deliver ‘explosive dynamics’, possibly a term borrowed from the rarely relaxed world of home cinema. That is, however, not the only drive unit on this subwoofer, there is a second one underneath the box that is also made of carbon fibre, but is flat and unpowered, it is a passive bass radiator that REL uses instead of a reflex port. Stands are shaped to allow air movement around this driver.

The engine in the Carbon Special is one of REL’s NextGen 5 amplifiers, a Class D 1000 Watt powerhouse that thankfully weighs a lot less than a class AB alternative would, but is said to have current reserves that “easily keep up with the demands of even the most rigorous user”. Like all REL subs, there are several ways to connect the Carbon Special, but those looking for best sonic results are directed towards the cable supplied with the product. This has three terminals for the amplifier; right and left positive plus a single negative, as well as a Neutrik Speakon plug for the sub that connects all three at the same time. Home cinema enthusiasts have an LFE option, and hi-fi users with a sub output can hook up to either the RCA or XLR inputs. But, if maximum coherence is the goal, I wouldn’t recommend it. The other desirable option is a wireless connection costing an additional £300 for which you get a receiver, the requisite transmitter (REL supplies one called Airship) and, apparently, this sounds better than the cable provided and means there is virtually no limitation on room placement. As mentioned, one could also stack vertically up to three subwoofer units per channel.

This REL is equipped with so-called PerfectFilters that allow the user to adjust the upper roll-off frequency, the output level (which is separate for high level and LFE inputs) and phase. Getting all the parameters right for both the room and the partnering speakers is critical to the end result. Placement is a factor, but not as big a one as I had expected. REL’s Rob Hunt put the Carbon Special to the right of the RH channel main speaker and a little further away from the wall, connected up the high-level input and power cable and listened to the results. Setting up process starts with finding the best phase position followed by dialling in the output level and the crossover point (roll-off) by ear. A little bit of trial and error is inevitable, but, with perseverance and effort, the final result can be good and rewarding.

Rob set the Carbon Special up with Bowers & Wilkins 802 D3 speakers, which have a reasonably prodigious extension and power in the bass, albeit less so than a 1kW actively driven device such as the REL. I started listening with some acoustic guitar, Gwenifer Raymond’s latest single ‘Eulogy for a Dead French Composer’ (Tompkins Square). This recording has limited low-frequency content but sounded more relaxed, and three dimensional with the REL switched on, the balance became a little warmer and the timing improved. It was more than a subtle improvement and made the brilliance of the fingerpicking all the more impressive as it brought more detail from every note. A more substantial piece of music, Schubert’s The Great (Maxim Emelyanychev, Scottish Chamber Orchestra Schubert: Symphony No. 9 in C major, Linn), the orchestra expanded before me creating a vast vista of sound that felt more complete and solid, yet smoother, so much so that the level could be cranked a slightly higher than usual without apparent distortion.

The Carbon Special appears to fill in the fine detail so much that turning it off creates an impression of something missing. There is a sense of leading edges being softer, and all may not like that, but this effect is accompanied by a stronger sense of timing, which, no matter how counter-intuitive, proved to be the case with many pieces of music I played during the review. On Radiohead’s ‘Decks Dark’ (Moon Shaped Pool, XL), extra low end was clearly present from the start, as well as more information higher up the bandwidth. Almost as if the subwoofer was unearthing quieter notes that the speaker was not. May seem strange, but did sound rather good. Another impressive virtue of the Carbon Special is a sense of the greater wealth of information being presented in an entirely coherent fashion. With Alfred Brendel playing Haydn (11 Piano Sonatas, Philips), the REL takes the edge of a slightly bright piano adding depth to each note. The very same thing happens with Lana del Rey, whose voice sounds spectacular on ‘NFR!’ (NFR!, Polydor). It’s usually strong, but the presence produced by the Carbon Special is off the scale, and the rumble in the chorus is sublime. I played some more voices to see if it could do the same again and, more or less, it did, like Richard Lord’s subs never did.

I thought it would be salient to try the REL with a smaller speaker, so I hooked up a pair of PMC twenty.21 stand-mount design. It was at this point that the set up no longer worked and I realised how laborious getting a seamless transition with smaller speakers can be. However, with perseverance and pulling the PMCs away from the wall to energise the mid and treble, I achieved a good result, once again using the sub was clearly preferable to not having it engaged. The effect was similar to that with the 802s; smoothing of the slight forwardness and a filling in of the gaps in its presentation, while timing also improved. Naturally, there was also a stronger sense of bass extension well beyond the main speaker’s reach, so any track with low-end power was much more substantial, but not overblown. Esperanza Spalding’s bass line benefited considerably on ‘Ebony & Ivy’ (Emily’s D+Evolution, Concord), going from a suggestion to a statement when the subwoofer was switched on.

The result with the 802 D3s was too enjoyable to stay away from, especially when I started playing some vinyl. Jeff Beck’s Blow by Blow (Epic) was superb with magnificent scale and a vibrant, live sound. My ancient copy of Led Zeppelin III (Atlantic) is usually a little on the thin side, but the REL filled in the gaps and made it richer and more full-bodied. It was at this point I realised I’d need a stomping mat if I wasn’t going to wear out the carpet.

I was genuinely smitten with results achieved by the REL Carbon Special when partnered with the big B&Ws. If those were the only speaker I used, I would probably have to acquire one. Improving so much on midrange and treble coming from a large floor-standing speaker by using a subwoofer might look like cheating to many. It is not. If you already have a decent system, have some understanding about the harmonic behaviour of the frequency range, and are looking to get more fun out of your music collection, this is probably the least expensive and most comprehensive way to do it.