The Italian firm Pathos Acoustics is well-known for several things. First, it makes some beautiful-looking electronics, all chrome and wood and shiny metal. Second, it uses hybrid circuits in many of its best-known designs. Also, third is the fact that they sound outstanding; often out-performing many considerably more expensive designs.

Pathos is also well known for its InPol amplifier circuit, which effectively creates a hybrid, pure Class A amplifier, but this tends to appear on the company’s smaller products (and, paradoxically, its heavyweight flagship InPower Mk2 amp). To retain a degree of financial sanity (and not require a physiotherapist on speed-dial), the company’s big integrated is a non-InPol hybrid design, meaning the input section and preamplifier stage is pure Class A (and uses a set of Tung-Sol ECC803 valves), while the 200W per channel MOSFET-based solid-state power amplifier is a Class AB design. It also comes with a headphone amplifier that’s capable of delivering a very healthy 2W at 32Ω. In short, it’s little wonder Pathos Acoustics named this big shiny beast after the Greek god of strength; this thing could arm-wrestle a tree! 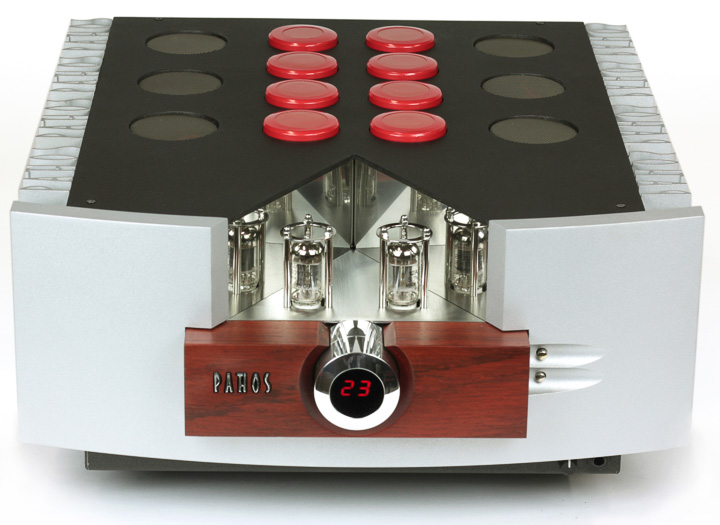 Don’t view its lack of InPol circuit as some form of compromise, however. Under the hood, the Kratos hides some innovative new design concepts, put in place to significantly close the gap between conventional hybrid designs and InPol. Pathos couldn’t and wouldn’t have made Kratos a few years ago, as the company would not sacrifice sound quality for added power, but recent advances mean you can have your cake and eat it.

With great power comes great connectivity (hopefully) and the Kratos as standard comes with five line inputs and two balanced XLR inputs. There are options for a built-in DAC and phono stage too, although we went with the standard line-level option.

The manual is comprehensive, and in fairness, it needs to be. The basic functionality of the Kratos isn’t that minimal, but many operations are handed over to unlabelled and identical buttons on both the front panel and the remote. It’s not entirely counter-intuitive, but familiarity comes after many days of head-scratching and flipping through the manual to see whether a specific button changes channels, puts the Kratos in standby, or mutes the volume. Eventually, you get to understanding the layout though, and the manual helps a lot at first.

The hybrid path is a road well-travelled by Pathos, and for a good reason; it sounds great. I started with Andreas Schiff playing the ‘Appassionata’ [Beethoven’s Sonata No 23 in F-minor, from Volume VI of the 2008 recordings by ECM]. This recording is useful in several ways; it should be extremely detailed, the piano tone exposes any weaknesses in the system, it should ‘flow’ musically, and make you want to listen to more of the Sonatas in the cycle. An amplifier that is too slow, too focused on one performance aspect, or just too coloured in any way would be laid bare, but the Pathos Kratos worked wonders with this recording.

The Kratos isn’t a ‘dip into music’ amplifier; Pathos forces you to drink deep from the musical well. Kratos is not for track skippers and you stay a while as you play an album in its own right. That might lead you away from some modern albums that are little more than a badly-curated collection of an artist’s hits with a few fillers, but when you get something glorious like Nils Frahm’s All Melody recording [Erased Tapes], you start at ‘The Whole Universe Wants To Be Touched’ and don’t come up for air until at least ‘Fundamental Values’. That’s 10 tracks into a 12 track album; great for listening, terrible for writing notes for a review! In fairness, each track unveils a little more about the amplifier in its own right, from the percussive breaks in ‘Sunson’ (showing just how well the Kratos copes with a rhythmically confounding work and its outstanding transient performance), through the very fine three-dimensional space around the performance and the excellent little microdynamic cues in ‘My Friend the Forest’, to the Tangerine Dreamish and almost Mogwai-like build-up of the title track, and on. 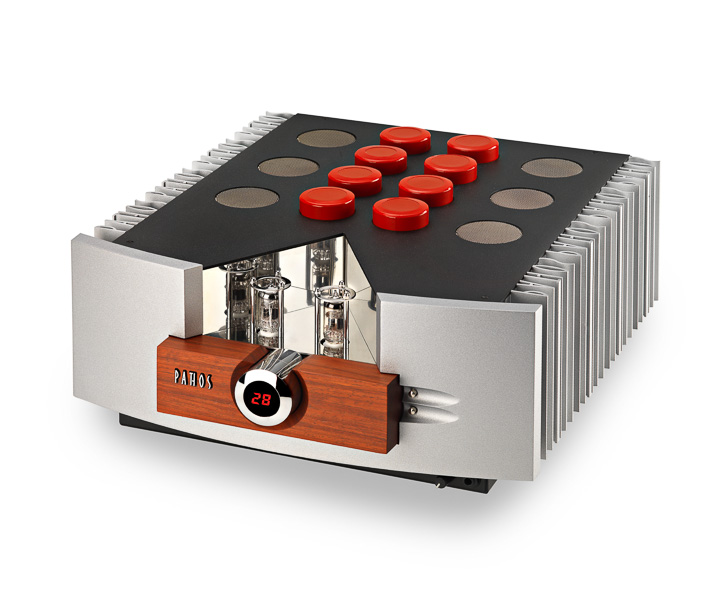 I’m not big on audiophile recordings, but there are a few exceptions. Depending on your viewpoint ‘Angel of Harlem’ by the acapella group The Persuasions [The Persuasions Sing U2, Chesky] is either the gospel/doo-wop version of a U2 song you never wanted, or a welcome alternative to St. Bonio’s off-the-chart pretentiousness (Bonio is a brand of dog-biscuit in the UK). This track shows up the dimensionality of the Kratos, in a right way; each singer in the group has his own three-dimensional space, thrown wide of the loudspeakers, with considerable depth and even some height. There is perhaps a touch of lightness to the bass singer’s voice, in part because he is to the extreme of the soundstage to the point where some phaseiness might occur, but the energy of the singers and the sheer quality of the recording shines through nevertheless.

In terms of pop-music performances, it’s hard to beat ‘Animales Hambrientos’ by Bebe [Cambio De Piel, Warner Music Spain]. My Spanish is pretty much limited to “Mi aerodeslizador está lleno de anguilas”, but I can recognise an excellent recording in any language. In fact, not being able to understand the language has benefits in listening for vocal articulation (it disengages your in-built word assembler, and you can hear the ‘shape’ of the vocals without automatically filling in the blanks), and that articulation is excellent.

This clarity also came through in listening to the title track from Public Service Broadcasting’s Inform Educate EntertainCD [Test Card Records]. The track is a very live-sounding recording played over a series of samples from the last 80 years of British movies, TV, and radio. This recording has everything from a Christmas speech by The Queen, to samples from The First of the Few (used extensively in the next track ‘Spitfire’), to the pips from Radio 4 news broadcasts. These samples were very ‘front and centre’ yet didn’t detract from the intensity and rhythm of the recording.

With a name like Kratos, a listless performance was never on the cards, and Pathos doesn’t disappoint. It’s full of energy and intensity, on almost everything. Also, it stays the right side of exuberant when needed. There’s a sharp tang of the very high-end here; perhaps it doesn’t have quite the top-end sheen that comes with monumental amounts of money spent on amplification, but instead, it goes for the natural and refreshing. There is a touch of forwardness, which might make some equally forward-sounding designs a little too forward, but it’s also just on the right side of exciting.

There’s one last sound quality point to note, and that’s the headphone socket. In many amps, this is an afterthought, but here this is a real powerhouse. It can drive almost any headphone you could think of and has that combination of refinement and sheer oomph that the Kratos does so well with loudspeakers. The headphone socket’s most significant limitation is it isn’t immediately visible!

The downsides are that sometimes the Kratos is a champion of style over substance. Those lovely-looking heatsinks give the amp an elegant almost Art Deco graphical appeal. However, try to pick the amp up, or somehow rap your knuckles against them, and the language is less Art Deco, more Modern Primitive. Also, as mentioned before, buttons with no information and an elegant silver remote with not a hint of a legend anywhere make the amp less user-friendly than many. Finally, the headphone socket that lives under the main front facia (just a knob and a ¼” jack socket) could even do with balanced output for more up-scale headphones, and without it almost hides its light under a bushel. None of these aspects of performance is what you might call a ‘deal-breaker’, though, and that elegant look and sound are oh so very beguiling in the flesh. 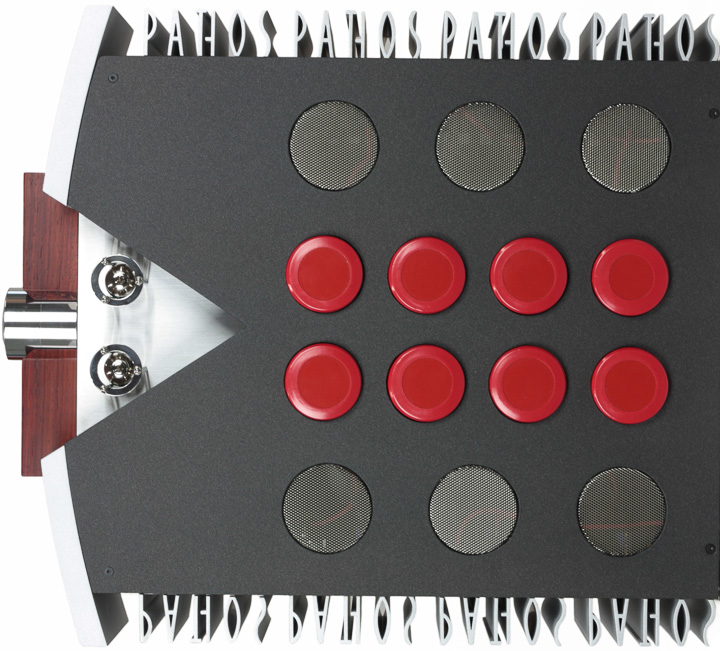 It’s hard not be drawn in by the Pathos Kratos. It’s powerful, yet can sound as refined and as elegant as any tiny valve amplifier. It’s warm, yet not soft and soggy sounding. It fills the room with sound, driving ‘difficult’ speakers with ease and making it more natural to drive loudspeakers to seem like they just got a bit bigger and more powerful. It more than looks the part too. So long as you are willing to put in a bit of button-fu at first, the Kratos might strong-arm its way into your home.