The British have two very galling character flaws. We are not good self-promoters, and we love a bit self-deprecation. So, when it comes to a turntable brand like Origin Live and it’s flagship tonearm and one-from-the-top turntable, we should be all over it like a nasty rash, praising the brand and stamping our respective feet about how the plucky little British brand takes on the big guys… and wins. But we don’t do that. Instead, we go all British and get embarrassed at the success of another.

Origin Live is one of those old-school engineering-based companies that were supposed to have disappeared in the 1980s. In a small factory on England’s South Coast, Mark Baker and the small team run one a cramped, swarf-filled factory in the best tradition of the great British engineer, and the results speak for themselves.

Until the recent introduction of the cost-no-object Voyager, the Sovereign was the top of Origin Live’s turntable line-up. It’s also arguably the pinnacle of the ‘attainable’ decks in the line, because the best of the best Voyager S will set you back £25,000: that equates to four Sovereigns, and enough change for a tonearm and cartridge. 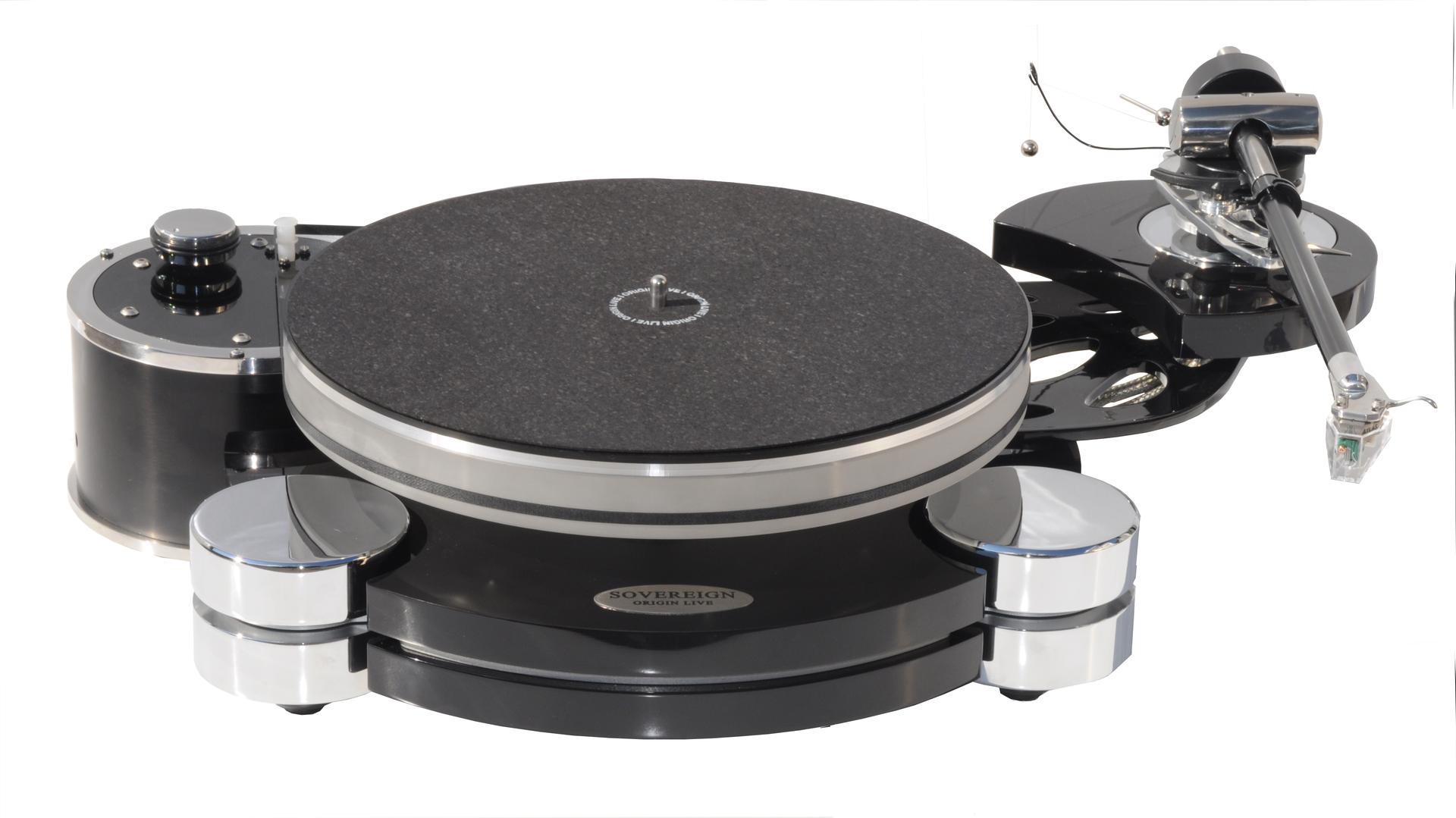 From the Aurora and up to the Sovereign, the basic turntable layout remains the same; a belt-driven design with an outboard motor to the back right, the deck on three adjustable towers. Effectively, the further up the Origin Live product line you go, so the greater the mass of each component in the turntable. Or so a surface reading of the turntables would suggest. In fact, this is an oversimplification in the extreme. Simply looking at the intricate milling of the underside of the Sovereign’s alloy top platter highlights exactly how much more careful design and engineering goes into the better turntables. The platter is a composite of the aforementioned machined aluminium top with an acrylic lower section, and a felt mat, and this effectively decouples the record surface from the bearing. It’s a non-suspended design, although there is a significant amount of damping built into those three adjustable feet. Origin Live uses a very high tolerance bearing, but the usual slow insertion of bearing into housing is not so prevalent, because Mark Baker doesn’t think going for almost interference fit is the best way to make a bearing noiseless. The deck is supplied with a little vial of oil to lubricate that bearing, and expect a little bit of overspill when oiling the bearing, but think a couple of extra drops, not Deepwater Horizon!

The motor sits in a separate, high-mass housing with a separate power supply block that sits away from the deck itself. The overall look of the turntable is extremely elegant and (gloss black acrylic aside) less ornate than many of its turntable peers. There are no spinning discs, pendulums, exoskeletons, or air pumps. There’s not even a record clamp. It’s just a damn good turntable, engineered well.

The original Sovereign was designed for a 9.5” arm, but the outriggers were redesigned and extended to accommodate a 12” arm on the skeletal armboard, which adds a £390 premium over the base £5,700 turntable price. It’s also possible to have two arms fitted when building the turntable, and this adds £490 to that base price. The armboard is pre-cut to suit Linn or original Rega arm bases, because the geometry of these arms suits the turntable itself. Other arm bases can be accommodated but, warns Origin Live, the cost of changing back to a Rega arm base (for one of its own arms) is considerable.

Origin Live’s arms fit the original Rega geometry (not the new three-point Rega mounting), and that is recomputed for the 12” arm. Although Origin Live’s first arms were based around Rega components, everything today is 100% Origin Live. It’s worth re-iterating that fact periodically, because people still seem to think of the company as ‘those people who hot-rod Rega arms’.

The Enterprise (actually the Enterprise-C, which as every Trekker will tell you was captained by Rachel Garrett and destroyed in 2344 at the battle of Narendra III) is a hybrid design, using six different materials in the armtube itself, a dual pivot bearing (that mimics the stability of a gimballed bearing with the freedom of a unipivot), which is both extremely low friction and fully decoupled from the yoke assembly. It has both VTA and azimuth adjustment, and features silver wiring throughout. The arm is the top model in the Origin Live range, and the only one that can be supplied in the 12” form we tested.

My go-to turntable is a VPI Prime, with its 3D printed version of the JMW tonearm. I was so impressed, I bought the review sample. It’s currently featuring a Lyra Dorian moving coil cartridge and this combination just sings. However, the Origin Live turntable and arm combination improve on that VPI performance markedly, and also work beautifully with a Lyra design.

The Sovereign is one of the most speed stable turntables I’ve heard at or near the price. Solo female voice and records with tape wobbles cut to disc are perfect indicators of this at work. Listen to ‘Mining for Gold’ by the Cowboy Junkies on the legendary Trinity Sessions LP [RCA]; Margo Timmins almost fragile voice requires complete pitch stability to keep it in the moment and keep the lyrics powerful. Doubly so, if you listen to this first through digital replay, where you get the pitch precision and none of the ambience. Here, you get both, and perfectly so.

It’s easy to point out highlights on the Sovereign’s performance, because they are pretty much all highlights. But, speed stability aside, the big highlight has to be the sense of scale it brings to the bass. Bass notes are textured, deep, powerful, and dynamic. This is the sort of turntable Lyra should use to quiet the ‘it’s sounds a bit lean’ arguments set against the firm’s cartridges. The Origin Live combination shows it isn’t lean, just others decks and arms aren’t this resolving in the bass to show what Lyra can do. I pulled out the classic ‘Two Tribes (Annihilation Mix)’ 12” single by Frankie Goes To Hollywood [ZTT]  to show just what this table and arm can do. The Lyras track beautifully, but the amount of modulation in those grooves is intense and any limitations in the replay system are brutally exposed. Instead, I was sent back to the early 1980s, with all the nuclear paranoia and heavy-handed production values that go with it. In most cases, this is an impressive recording, but occasionally, when the turntable is outstanding, the sound takes on a kind of enveloping energy that makes it impossible to turn off until the very end. It also has the kind of complexity and depth of soundstage that only someone like Trevor Horn could pull out of the faders.

It’s pointless to break up the band here. The deck is excellent, the arm is excellent, and the combination of the two seems to be greater than the sum of the parts. I was a little concerned that a 12” arm ends up adding instability, mass and wayward geometry to an excellent 9.5” design (as is often the case), but in the case of the Enterprise-C what notional sacrifices made in extending the arm are more than balanced by the added accuracy across the whole album side. There is a ‘just cut’ fluidity and openness to the sound that makes it seem like albums you know through repeated plays are fresh from the stamper. The sign of a good turntable and arm combination is one where the idea of splitting the two up into their component parts seems alien and wrong. The aforementioned VPI Prime (along with Kuzma and Brinkmann) has that integrated approach to design. So does Origin Live.

I’ve tested Origin Live decks before. I know how good they can sound, but that foreknowledge left me unprepared for just how good the Sovereign with the 12” Enterprise arm can sound. A reviewer is only as good as their last criticism, but I’m struggling to find anything other than praise to heap on the Origin Live duo here. It’s one of those rare turntables that doubles as a time machine; you don’t just play an album, you are transported to where you were when you first heard that album. Records you know well suddenly sound like this is the first time you’ve heard them, and you can give the Sovereign/Enterprise duo any vinyl-related test you can think of and it will come up trumps. Origin Live’s turntable and arm combination an outstanding and natural paring, and come highly recommended!