The Onkyo DP-S1 is the second of two collaborative digital audio players between the brand and its stablemate Pioneer. The first pairing – the Onkyo DP-X1 and Pioneer XDP-100R – were larger, Android-based players originally introduced about 18 months ago. The new Onkyo DP-S1 shares its platform with Pioneer’s XDP-30R.

The difference between the generations is simple. The first generation models were larger, more expensive, and Android-based. The new models are smaller, cheaper, and use the company’s new custom-designed Linux operating system. The differences between the Pioneer and Onkyo models are the same, too: in both cases, the Onkyo model sports uprated components (like thin-film capacitors) in the signal path and its voicing is said to be less ‘peaky’ and more in line with audiophile requirements. In addition, the slightly cheaper Pioneer is destined to be sold through more mass-market vendors, where the Onkyo is available from more specialist audio retailers. There is also a very slight stylistic difference (the bottom right corner is lopped off in the Pioneer model). 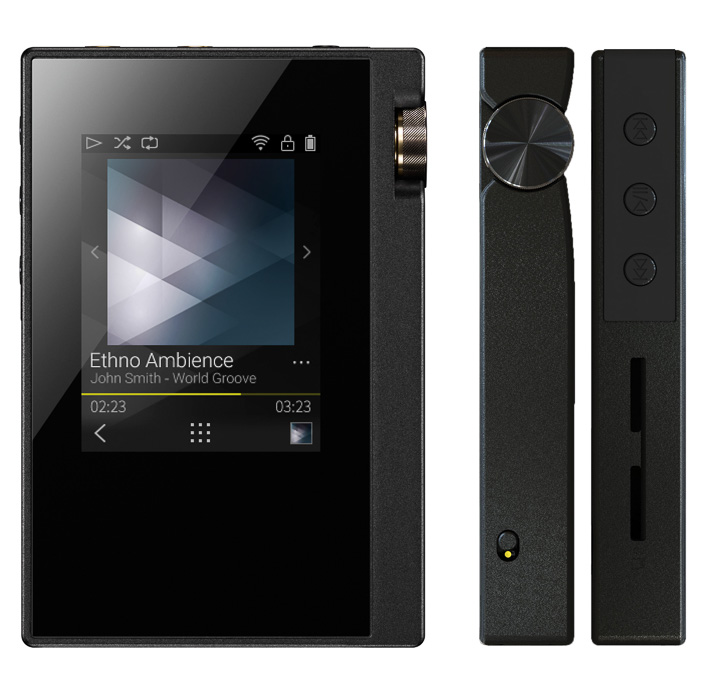 In many parts of the world, the Onkyo DP-S1 is also known as the DP‑S1 Rubato (the Pioneer has its own suffix – the XDP-30R Private – which sounds either militaristic or a bit pervy). The word ‘Rubato’ is a musical term for the expressive rhythmic freedom within passages of a composition, without changing the strict tempo or even pace of the whole composition. It’s derived from the Italian word rubare or ‘to rob’, which might not be the best choice of words when faced with an extremely attractive, small, light, portable, and inherently ‘nickable’ piece of equipment. So, we’ll stick with DP-S1, thanks.

The core of the Onkyo DP-S1 is a twin-DAC arrangement of ESS9018C2M SABRE DACs coupled with twin ES9601K amplifier chips, laid out symmetrically and each served by its own power feed from separate capacitors. To take full advantage of this twin converter arrangement, you need to use the DP-S1 in balanced mode, eschewing the regular 3.5mm headphone jack for a 2.5mm four-pole balanced audio mini-jack connector. You can’t use both at the same time. In balanced mode, you can run as standard with a slightly higher output, or what the manual refers to as ‘ACG’ mode, where the grounding is more forcibly fixed. This leaves the output level identical to that of single-ended. You can also turn the 3.5mm jack into a line-level output. There is 16GB of onboard storage, supplemented by up to almost half a terabyte if you bulk up with large capacity cards in both micro-SD card slots, and a micro USB connector for connection to a computer or for charging. Software updates can be sent down the USB connector, or loaded to micro-SD.

Operation is by a combination of hard buttons for power, basic track handling, a thumb-wheel volume control, a button to prevent accidentally using the DP-S1 while in pocket, and a touch-screen for everything else. The touch-screen is small (2.4in), straightforward in use, the overall user interface is a classic (as in ‘it’s easy to use, but the combination of hierarchical menu structure and its overall looks make it seem like it was designed a dozen years ago’), and ‘gives good haptics’ in that operation is largely intuitive, and the screen is relatively responsive. The overall feel of the DAP is good, too, although the DP-S1 cries out to be used with one of its cases because the crackle-finish back panel is perhaps the only part of the DAP that looks and feels a little cheap.

Battery life is good, although the claimed maximum of 15 hours between charges requires a lot of hoop-jumping to achieve. The battery indicator, however, seems to have a bit of a life of its own. It will happily show a full battery for the longest time, only to run out of juice almost when you least expect it. I’ve had this problem before (with previous generation Fuji cameras in particular) and it can be a pain discovering your battery just went from full to empty in the space of about two frames. The Onkyo is a lot better than that, but accurate assessment of the battery isn’t possible here, and as battery life drops when you are processing DSD files.

The Onkyo speaks most digital formats, from ALAC and FLAC, up to uncompressed WAV and AIFF, right up to DSD 64 and DSD 128. For PCM files, it supports up to 32-bit, 192kHz, and MQA is a firmware upgrade away. There are dual clocks for PCM multiples of 44.1kHz and 48kHz sampled files, and a good two-level upsampler and a Hi Bit 32 up-rez option. There’s a choice of three filter settings, and these can be adjusted on the fly (I generally preferred the slow, over sharp and short). There is also a 10-band EQ and a five-level bass boost, which can be disabled for purists. 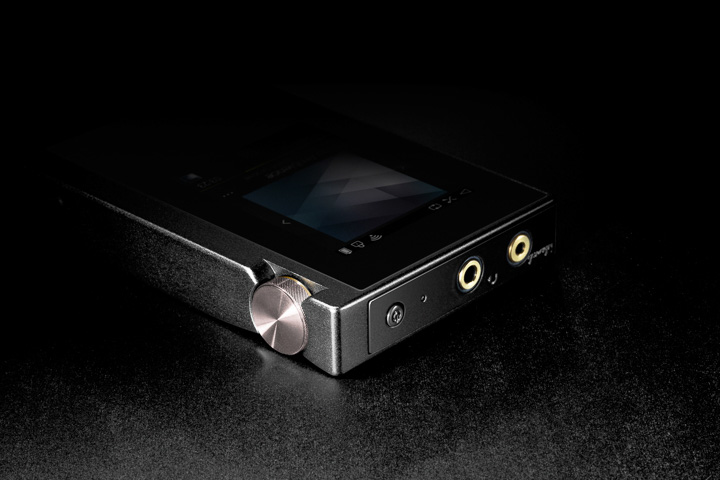 In addition to internally stored music, the DP-S1 includes dual-band Wi-Fi, and accesses TIDAL, TuneIn radio, and (presently) Deezer, with other online services intended for later downloads. It also includes Bluetooth wireless connectivity, to allow your DP-S1 to be played through in-car system, and desktop DACs. The one notable ‘absence’ is a wired digital output, although you can cheat the DP-S1 into delivering a USB output by powering it off, connecting it to the DAC, and restarting it.

Moving tracks from computer to DAP can be done using the company’s own X-DAP Link program for PC and Mac, although a good media player might prove better. The player has good sort functions and can build playlists on the fly. Search functions and entering Wi-Fi passwords can be a laborious process as it uses a variant of the phone keypad form of alphanumeric entry.

The move from Android to Linux operating system probably accounts for the DP-S1’s biggest feather in its cap. It is fast to use. Power it up from cold and it’s up and running in a few seconds. Scan a library on an SD card and it will do it rapidly. Point it at a track and it will find it and play it with the least delay. I had prototype software to play MQA and loading up these files took a little longer, but we’re only talking a second or two, and even that might be ironed out in the firmware proper. Where this really comes good is in playing back-to-back tracks. Gapless playback is currently not available to the DP-S1 platform; however, the speed the next track arrives makes the player ‘almost’ gapless. I’ve not heard a player move from track to track faster.

I’ve had unpublished hands-on experience of some of the better DAPs at the price and size of the DP-S1, most notably models from FiiO and Astell&Kern. In my opinion, the sound of the DP-S1 – even in standard single-ended mode – is the best of them. It has a lot of the dynamic range properties of more expensive players (not quite AK380 level, but pretty damn good), there is good soundstaging, and fine detail. I played ‘Cloudbusting’ by Kate Bush [Hounds of Love, EMI] and the DP-S1’s ability to separate orchestra from percussion and Fairlight synth, yet being able to pick out individual themes in the music, and her slightly batty vocals is reminiscent of a good two-channel audio system, yet with the precision of great personal audio. And best of all, the better the source material, the better the performance – those MQA sampler tracks like the Beethoven Emperor Piano Concerto [Kyoko Tabe, Denon] are just sumptuous and delightful.

The only notable downside is one that cannot be solved by Onkyo directly, as there is no provision for playing TIDAL offline in anything apart from TIDAL’s own iOS or Android apps. That aside, the size of the screen relative to the bezel does make the player look a bit old-fashioned compared to the AK70, but in terms of performance, track access, and almost all track-handling facilities, the Onkyo wins the day. 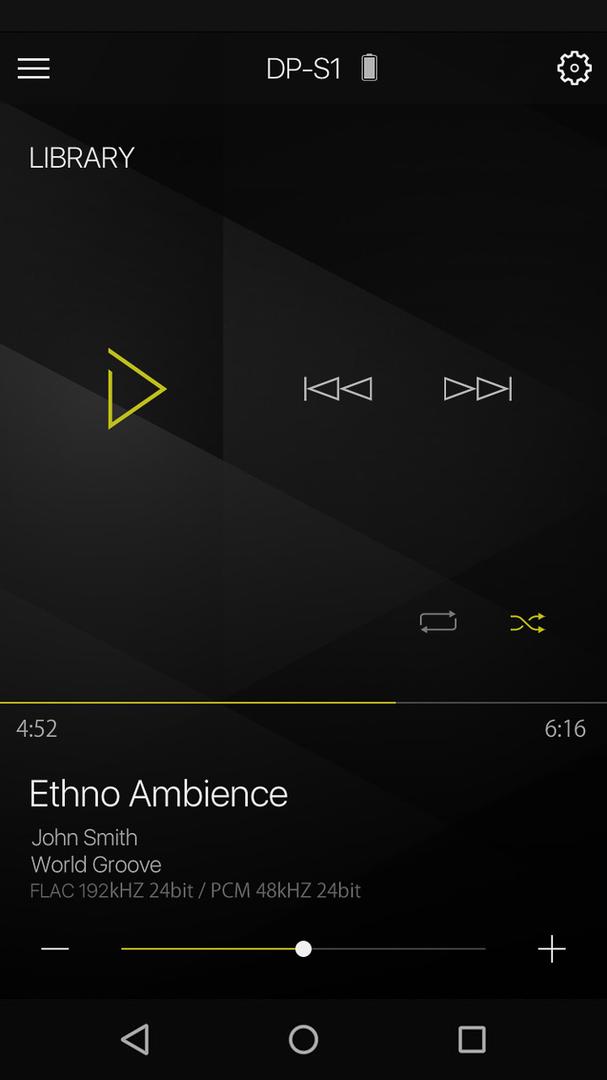 The DAP market is an odd one. Its heyday was in the time before iPhones, but then it was all about the iPod. It’s an inherently audiophile device now, as everyone else uses their phone. This probably limits the pool and the number of sales, but this is a shame because what they do is make music sound very, very good, indeed. Couple the Onkyo DP-S1 with a good pair of Custom fit In-Ear Monitors (especially if you swap the cable for a balanced one) and you are in for a musical treat. Beg, borrow, or Rubato one today!