Just within earshot of Silverstone racetrack, the Whittlebury Hall spa hotel has been the mid-September venue for the UK’s National Audio Show for several years. Although originally one of the leaders in the audio show race, in recent years the show seems to have been stuck in the pit lane, but this year it broke down at the first turn. The show, a fraction of the size on previous years, still had new and exciting products from manufacturers, distributors, and retailers showing their products in the best possible light, and there were still many visitors attending the show on the Saturday, but there was a pervading sense of the show being somewhat ‘played out’ and possibly a rethink of both the show and venue may be in order.

In fairness to the show organisers, some of this comes down to an increasing number of rooms that used to be allocated to exhibitors are now off-limits, as they have been taken over as office space by the University of Buckingham’s School of Education. This not only limits the number of rooms available, but also extends the gap between the entrance suite (where stands and the headphone zone was housed) and the main rooms. But regardless, the show was smaller than ever this year.

However, there were new products, and even a few new brands, at the show. One of the most interesting was Code Audio, a company minted earlier this year showing both its entry-level System One and its soon-to-be-release modular System Two. Both use DSP-controlled active loudspeakers and an amplifier system. The upgradable System Two begins with active two-way, three driver bookshelves, then adds anything from one to four bass units per side depending on taste and room size. Prices start from around £3,500 for System One, with System Two prices still to be confirmed.

Founded last year but brand new to the UK, Arendal Sound (named after the Norwegian city the brand hails from) makes a simple range of speakers named ‘1723 Series’ (a big year for the city of Arendal, apparently). Alongside the trio of subwoofers, the surround and centre-channel loudspeaker (called, appropriately enough Subwoofer 1, 2, and 3, Surround, and Center), the brand makes a floorstanding tower called ‘Tower’, a standmount monitor called ‘Monitor’ and an accompanying stand called ‘Stand’. These well-made and solid speakers, demonstrated by Man 1, Man 2, and Man 3 from Arendal, were sounding clean and refined, and were allegedly almost unbreakable under normal use. Best of all, the Monitor cost £1,400 per pair and the Tower just £2,350. 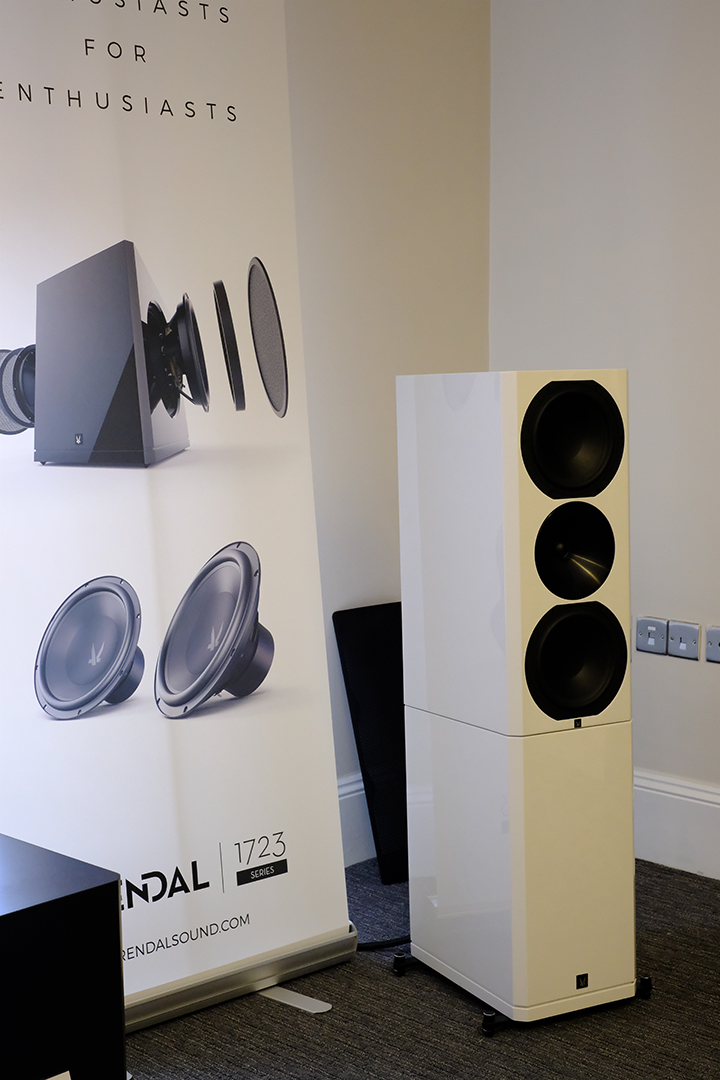 The other new face on the scene was Onkk, a UK manufacturer of a very promising looking and sounding Cue direct drive turntable. Priced at £16,000 without arm (or £20,000 with custom finished Origin Live arm, Onkk’s own arm is expected next year), the Cue is made by a high-end horologist and has some extremely solid mechanical engineering behind the design. Of particular note is the use of a high-grade ceramic bearing, a pistonic suspension system, and DSP speed control, which can fine-tune speed to within 1/100th of a revolution per minute and save that speed to memory for the next time that recording is played. This is just the first of several designs from the company. Watch this space.

Wall of Music is also a new brand, coming out of Eastern Europe via Northern Ireland. Its Prelude loudspeaker is a thin, open baffle design featuring a single high-frequency driver, a single midrange driver, and 16 low-frequency drivers per side, all for somewhere between £3,700-£4,000 per pair). Unfortunately, more information was not available due to a fairly significant language barrier, and no further information either in print or on-line, but such is the nature of audio start ups in 2016! 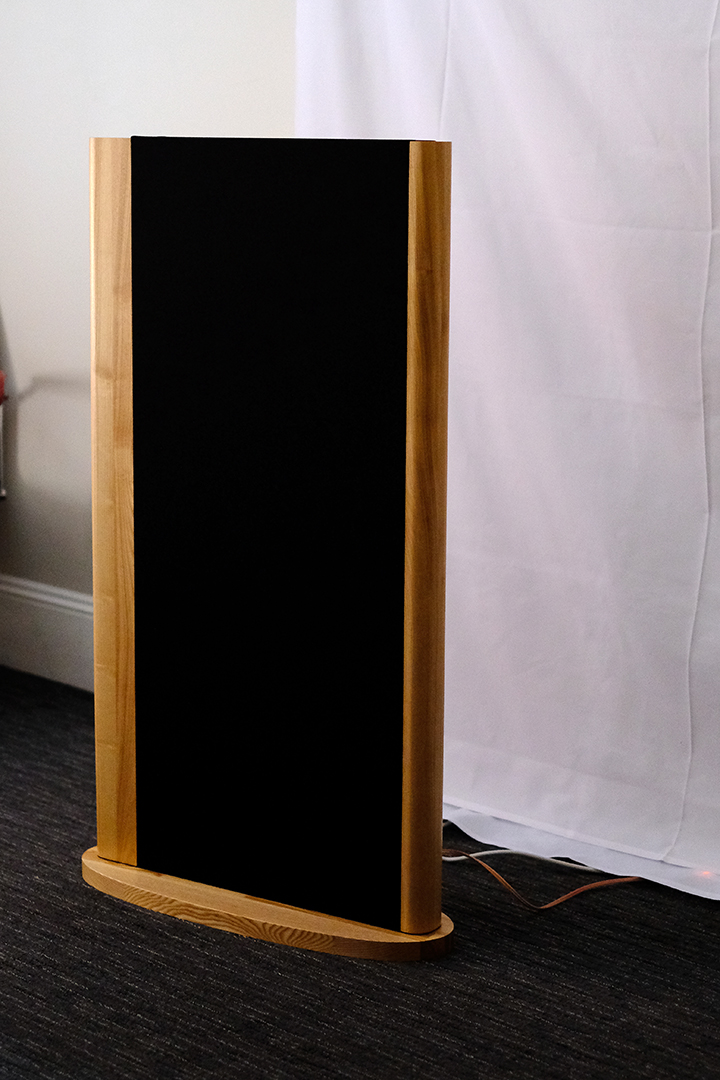 One of the more exciting new products from an existing brand was the £18,500 DS Audio DS-Master 1 cartridge and equaliser package. Building on the existing DS-1 light-driven cartridge, this new reference grade component uses a substantially improved equaliser (with higher grade components, and about five times the weight of its more ‘entry level’ brother), design improvements to the cartridge itself, and a fetching shade of purple light show. This proved an exciting sounding component in the great Clearaudio/GamuT/IsoTek-based system in the Sound Fowndations room.

Vertex AQ has been quietly busy of late, and showed off both a new £8,950 65W Class AB AP-60 power amplifier and a £9,950 sealed box, single-driver Beech Ply FRS-8 loudspeaker, both in the Aletheia range. As might be expected from the brand, both pay extremely careful attention to drain paths, EM and RF interference, power feed, and all other aspects of the company’s Systematic Approach to equipment design. 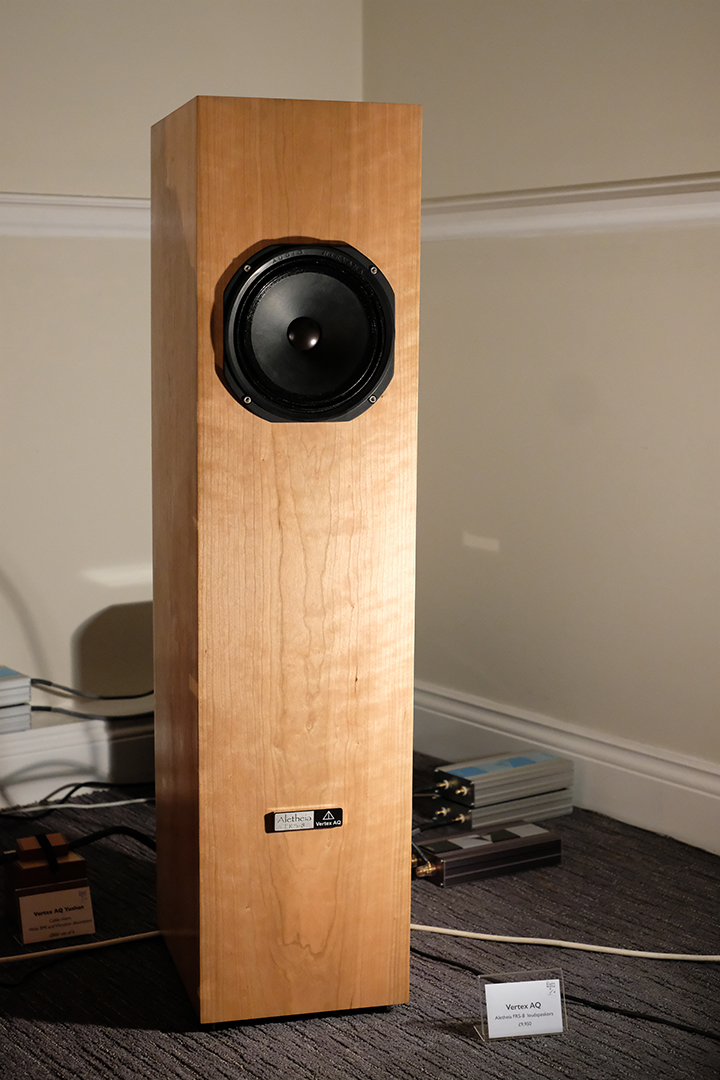 Graham Audio is fast becoming the go-to brand for all things classic British in loudspeakers. Recently revising the Chartwell name for the LS3/5, the brand also recently announced its VOTU floorstanding loudspeaker. A significant departure for the company, this tower and all its BBC derived designs were impressing many at the show. We hope to look at the VOTU soon… 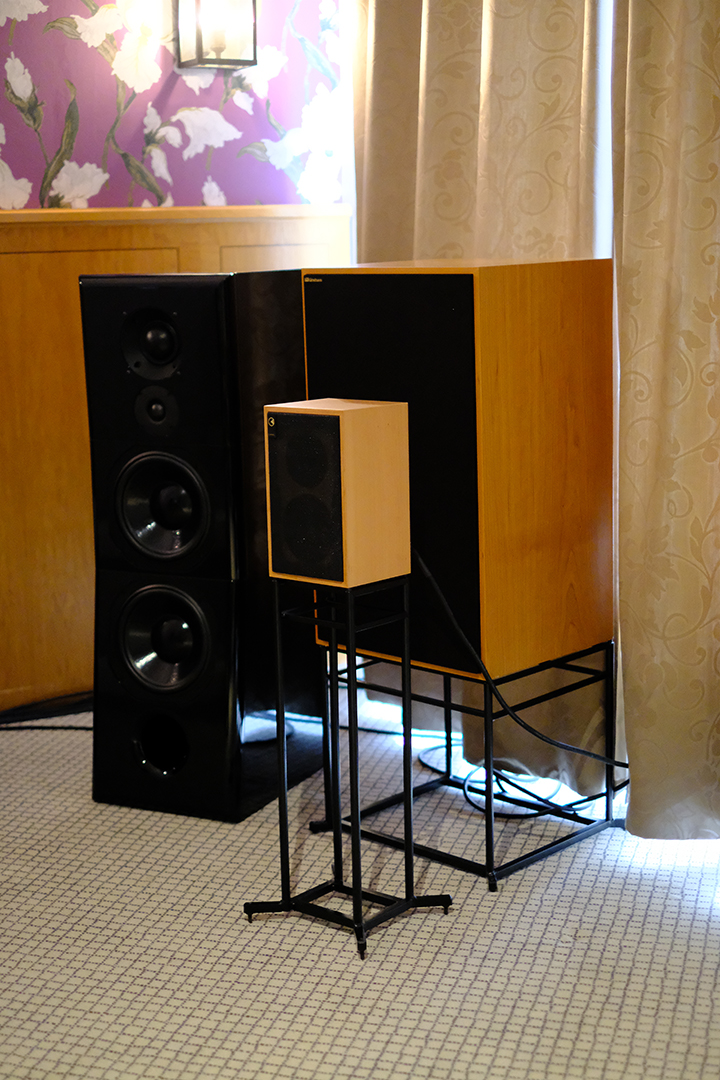 On the amplifier front, Whittlebury Hall saw the first ever trip abroad for the new Unico 90 integrated amplifier from Unison Research, a 100W hybrid valve/MOSFET variant of the company’s popular £4,000 Unison 150. This was the first version of the amp outside of its native Italy. The price of the new model is still to be confirmed.

Also distributed by Henley Designs, Roksan made a special version of its popular £1,900 Radius turntable, this time in pink with a pink-toned tonearm. The reason for the colour scheme? A donation to Breast Cancer Care is made for each pink sample sold.

Staying with turntables, the new £2,295 Prelude by newcomers Planalogue looks very promising, with great accent on energy dispersion in both the constrained layer plinth and the vibration damped standalone motor pod. This Oxford built turntable was sounding great, playing through an Abis tonearm and Hana moving coil cartridge.

In the headzone open-plan headphone section, most of the products on show had been seen before, with a few notable exceptions. The Schiit Audio Jotunheim headphone amp/preamp (see: http://www.hifiplus.com/articles/first-listen-schiit-audios-new-jotunheim/) had its first UK outing, playing both Mr Speaker’s finest headphones, and on loan to AKG, to showcase its new £1,100 K872. This is essentially a closed back version of the popular 812 headphone. 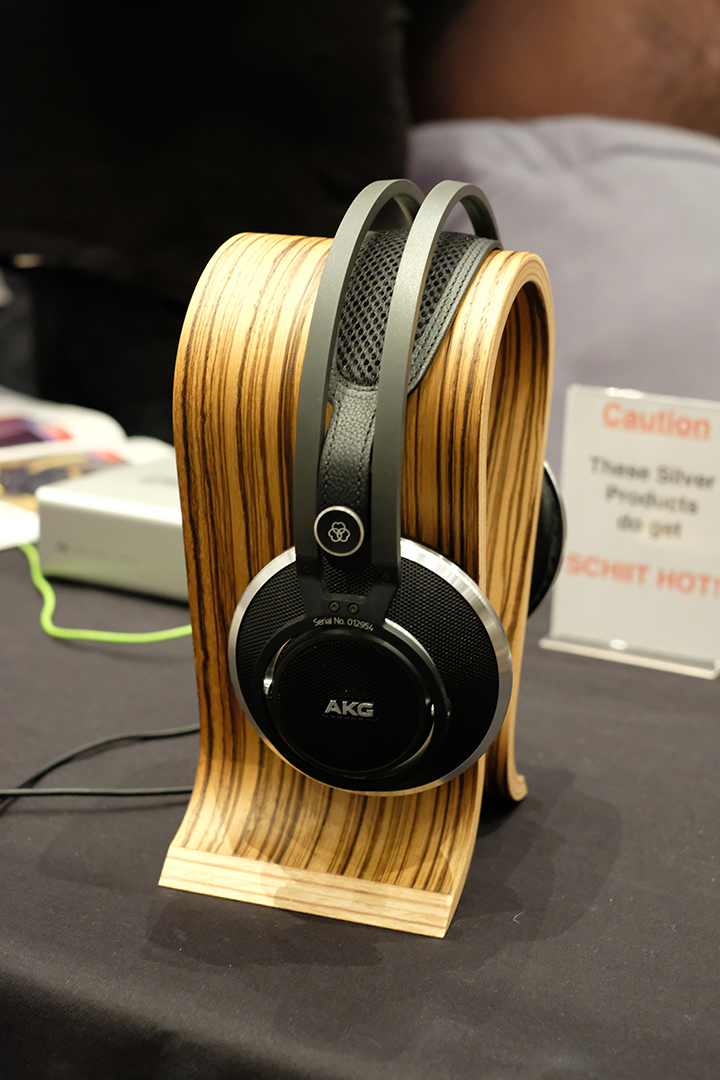 Meze – best known for its excellent 99 Classic closed-back headphones has launched two new earphones; the £49 11 Neo and the £69 12 Classics. Both using a titanium coated 8mm Mylar driver, the Neo sports an aluminium housing while the Classics features real wood. They both looked great in their respective Iridium and Walnut finishes. 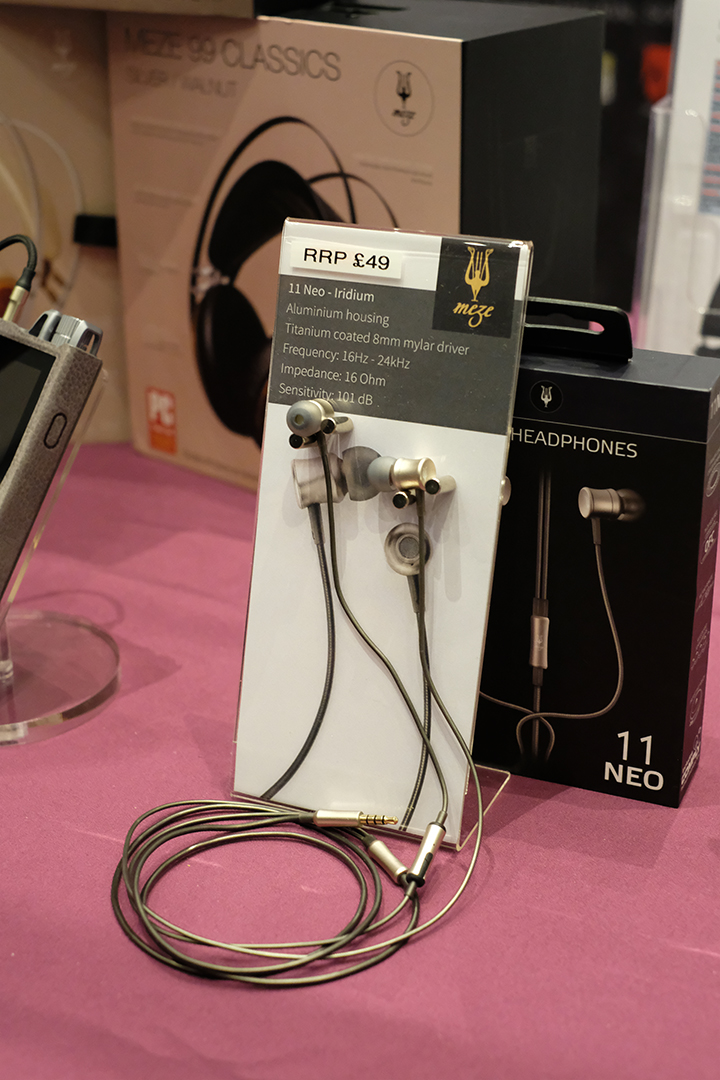 Ultrasone was showing prototypes of its Black Pearl versions of its Edition M on-ear and Edition M+ over ear closed back headphones. Prices are still to be confirmed, but these super shiny headphones were in full parade gloss glory!

Music First Audio showed a prototype of its headphone amplifier at several shows. It’s now close to being the finished article, and in the company’s truly iconoclastic manner, was driven by a Sony Walkman Pro. Cassette never sounded finer!

In the main show, Teddy Pardo was demonstrating the £530 HPN headphone amplifier to great effect with a pair of Sennheiser HD800 headphones. This, coupled with the matching Teddy DAC, was extremely live and exciting sounding.

There was more of course. One of the best sounding rooms at the show was the Audio Consultants room, featuring Nottingham Analogue vinyl, Norma electronics, and German Physiks loudspeakers.

It is particularly good to finally see Pear Audio’s Tom Fletcher derived turntables and arms make their way to the UK, including some extremely interesting prototypes (the foam platter is just there for effect!).

And also good to see Cayin audio electronics back in Blighty.

Also we hope to see more about the Auris range of electronics in future, especially the good-looking £1,795 DHP converter.

A smaller than usual show, then, and while not exactly ‘disappointing’, neither was it particularly ‘appointing’! But for many of the exhibitors at least, it was more about quality than quantity.