AVI is a UK company that specialises in active loudspeakers and subwoofers. That presses two audiophile ‘off’ switches – powered speakers, and external bass boxes – but those who like good sound instead of miring themselves in audio dogma should look at the DM10 monitor and 10” Sub from AVI with a little less bias and a little more attention.

The company is the brainchild of designer and engineer Martin Grindrod, who saw almost a decade ago that the market for separate hi-fi components was in decline and that a substantial change was needed. That change meant a move to active loudspeakers, at first using speakers with power amplifier modules, requiring either a conventional preamplifier or use of a computer’s own volume control. However, the revolution was complete by adding a DAC and a simple yet well-engineered line preamplifier into the mix, thereby completely removing the audio system elements to within the loudspeakers themselves. Which takes us to the present day and the DM10 loudspeaker.

AVI’s DM10 is the larger of two standmount loudspeaker models, the baby of the breed being the DM5. In both cases, the drivers are of good stock, even if they aren’t made of hand-spun unicorn eyelashes: in the DM10, these comprise a 25mm silk dome tweeter and 165mm paper cone bass unit built to AVI’s specification by Sinar Baja, an Indonesian company that leverages a considerable amount of Scanspeak DNA in its design and engineering teams. The DM10’s active section features a 75W amp for the tweeters and a 250W amp for the bass units. Instead of the more commonly used Class D switching amp modules, AVI prefers linear amplifiers with bipolar power transistors, chosen for solid sound quality reasons.

The unique part of the DM10, though, is the use of an eighth-order Linkwitz-Riley crossover network (LR8) handing over at 2kHz. This still leaves a full octave in the 165mm unit before it reaches its natural limits. The LR8 network – only achievable realistically with an active crossover – has a very steep 48dB/octave slope, which drastically narrows the crossover region, and is extremely rare: the considerably more expensive Event Opal active studio monitors being the most notable other LR8 crossover user. The DM10’s cabinet itself harks back to the ADM9 active loudspeaker that revolutionised AVI’s fortunes; it’s a solid pro-monitor sized veneered cabinet, with a front-firing port. 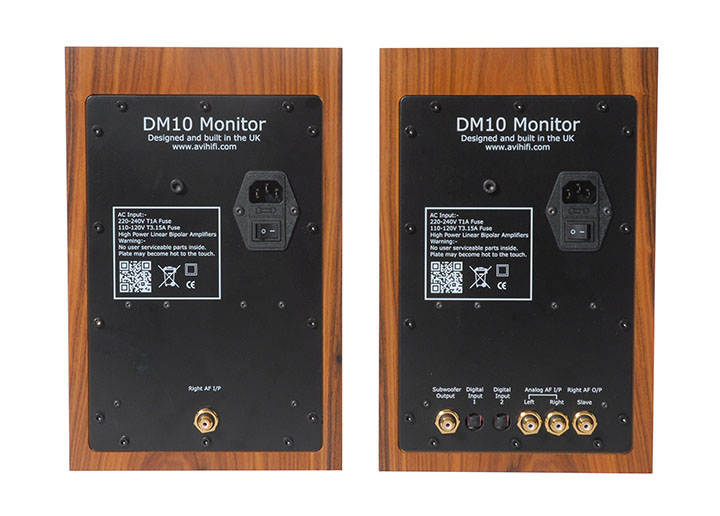 The speaker’s DAC stage features two Toslink S/PDIF connectors, but eschews coaxial S/PDIF, USB, HDMI, wireless, or Ethernet connections. Toslink is often overlooked by audiophiles, but is in fact one of the most flexible digital audio connections presently available. Its inclusion means the DM10 can access anything from a high-end CD transport or a network streamer, through Sonos boxes, laptops, and Google Chromecast, and even TV sets and games consoles. The DAC circuit itself uses a Wolfson WM8741 chip capable of 24-bit/192kHz precision, but sample rate conversion is used to play music at a preset 24-bit/96kHz.

Alongside the DAC section, there is a single line-level stereo analogue input, with high-grade gold-plated RCA plugs, there is also a RCA connection from the master loudspeaker to the slaved right channel, and a similar RCA connection for a subwoofer. Those with long memories will look at this as an AVI 2000 series preamplifier in microcosm. The DM10 is also supplied with a small remote control. This has buttons to switch between the analogue and two digital inputs, volume up and down buttons, and a mute control. There are other buttons on the handset, but these do not serve any function on the DM10.

The other product in this review is AVI’s 10” Sub that, as the name suggests, is an active subwoofer with a 10” (250mm) bass driver in its front panel. The 250mm driver is a long throw design that’s capable of an impressive 5cm cone excursion, and is driven by a linear amplifier delivering 200W. The sealed box sub has detent settings between 20Hz and 100Hz, with 60Hz being the optimum position for use with the DM10s. There is also a level control for speaker matching and room integration. The DM10 and sub integrate so well, you might think this a three-way system. The sub runs from a connection from the ‘master’ DM10, or from a subwoofer output on a home cinema amp.

Set-up is straightforward and unfussy. Everything on the DM10 is pre-set; you cannot adjust the sample rate for the digital inputs, for example, and there is no provision for balance adjustment should you need it. This runs counter to the audiophile’s love of tweaking, but ‘fit and forget’ means there’s less to mess up, too. If you use both speakers and subwoofer, set the sub to 60Hz and place it ideally between or behind the speakers, and adjust the level accordingly (go for ‘just about audible’). Adding more subs serves no purpose. 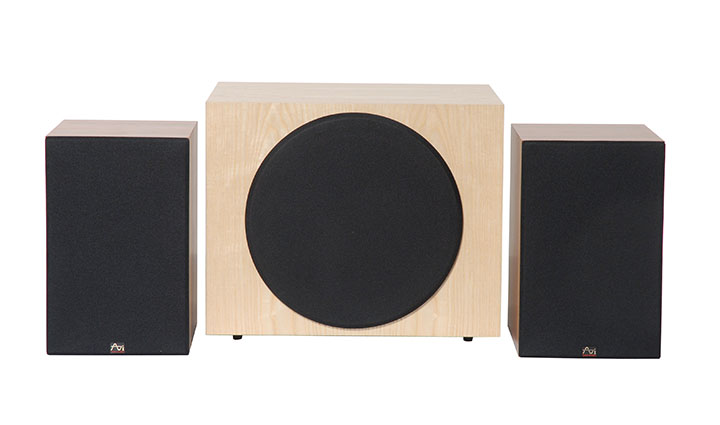 The speaker’s front port means they are relatively ambivalent regarding free-space or boundary use (there is little rear-wall reinforcement in a near boundary setting here, as there is an amplifier module between speaker and wall). 24” stands are a good idea: apply a gentle toe-in if you are the only listener, and a wider, firing-down-the-room set-up if you are not holed up in your man cave and others get a look in. Running in? Forget it! The speakers improve slightly with some bedding in, but that eighth order crossover slope also seems to cover the aspects of the sonic presentation that are altered by run in, and this speaker seems to demonstrate no significant changes over time.

There is a house sound to AVI, which has remained remarkably consistent over the years. I’m tempted to call that ‘civilised pro monitor’, because the DM10 combine the sense of power in reserve that you get from well-made pro speakers, with a more domestically acceptable sense of refinement you get from soft dome tweeters in home use loudspeakers. It’s a deceptively big sound from standmount loudspeakers, not in the ‘better piano than a piano’ sound of an LS3/5a, but there is an impressive sense of scale-change as you move from the small, close mic’d fey sound of Kat Edmonton’s Way Down Low LP [Spinnerette] to the bombast of Beethoven’s ‘Ode To Joy’ [von Karajan, DG].

The loudspeakers image well, in part because of their size, but also because of the close integration between the acoustic centres of mid and bass in the DM10. These combine to give the speaker an almost point-source sound. Imaging, alongside clarity, were two of the main design aims for AVI, and this shows in the soundstage on Eric Dolphy’s ‘Hat and Beard’ from Out To Lunch [Blue Note], which is expansive and accurately disjointed (reflecting the music).

Where the DM10 scores particularly well is in consistency across aspects like detail, imaging, coherence, dynamic range, tonal balance, timbre, rhythm, and more. It doesn’t exaggerate or emphasise any of these aspects, but its balance is closer to an ideal than many. If you feel you are a bass freak, for example, and all other aspects of design take a back seat, then the DM10 might not attract you. But, instead, if you like a sound that is more universally good overall, this is a fine place to land.

For many listeners, the subwoofer is mandatory. The speaker doesn’t try to bend or break the laws of physics, and it has a small cabinet. Adding a sub brings extra bottom end to the proceedings, for any room except the very smallest. But speakers and sub integrate extremely well, and carefully handled, the two work seamlessly. Best of all, ‘carefully handled’ in this case involves no magic rituals, incense burning, or human sacrifice, just a judicious hand on the gain dial. 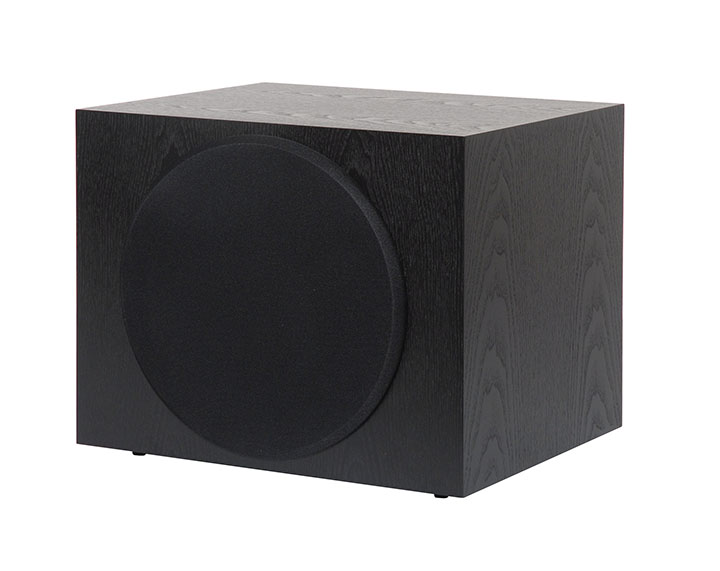 In 2007, AVI was the first and is still currently the only domestic audio brand to move from separates to a system that begins and ends in the speaker cabinet… and that remains a bold move. Today, however, many audio companies are exploring a similar solution, which appears to be something of a vindication. Regardless, AVI makes extremely good products that work well in domestic settings without costing a fortune, and the DM10 and 10” Sub demonstrate that perfectly. If you can shake off your audiophile addiction and give up all those electronics boxes, the AVI system is recommended and well worth checking out.

Controls: Level and frequency cut off