MoFi or Mobile Fidelity as they started out have a long history of making audiophile quality pressings of popular albums. They were surfing the crest of the vinyl wave back in the late seventies and continue to do so today. A few years ago some bright spark at MoFi’s Chicago HQ must have noticed that the turntable market had been growing along with the revival of the black discs they played, and so suggested that the company take advantage of its transcription expertise and build a turntable. Acting on this epiphany they started an electronics division and with a bit of help from Allen Perkins at Spiral Groove and Mike Latvis at HRS, MoFi Electronics developed two turntables. These are not just rebadged OEM models but ground up designs with an emphasis on fine detail, not least in the provision of a dust lid to keep our increasingly precious vinyl clean.

The MoFi StudioDeck and UltraDeck, launched two years ago, are wider than average, but just about fit on a regular 52cm width stand. They’re built on a plinth that’s made of aluminium and MDF to create constrained layer damping in order to keep vibration under control. The UltraDeck has a thicker plinth and heavier platter, the latter being 33mm thick and made of Delrin, which is an engineering plastic often used in higher end turntables (Clearaudio for instance). Delrin has a similar impedance to vinyl, producing excellent damping properties when the two are in contact, eliminating the need for a record mat. The UltraDeck is driven via an O section belt by a synchronous AC motor that’s decoupled from the plinth. The motor itself sits outside the platter and has Delrin drive pulleys which offer the usual speeds with manual switch over. The plinth sits on four anti vibration feet made by equipment support specialist HRS.

The UltraDeck is equipped with a 10 inch Ultra tonearm comprising an aluminium armtube and headshell; ball bearings allow for both planes of movement and it’s wired with Cardas internal cable that terminates in RCA connectors on the back of the plinth. It’s adjustable for VTA and azimuth, but the UltraDeck+M, complete with cartridge, is supplied with these two settings in the correct position. There is a marking on the back of the arm to show where to position the counterweight. However this is quite a wide indicator and merely moving the weight to the back of the mark does not place downforce within the 1.8 to 2.2 gram recommended range. Rather, it takes it over, so you need a downforce gauge to get close to the desired 2g. That apart it’s an easy arm to set up until you get to the thread and weight bias system, which involves a tiny grommet and a post that’s very close to the counterweight. The trick here is to fit the anti-skate device to the arm prior to fitting the counterweight, then it’s all pretty straightforward.

The main bearing is inverted and is larger in diameter than usual. It’s designed, says MoFi, using a combination of hardened steel, bronze, and sapphire, aided presumably by a little lube (there was none in the box), because the platter appears to spin perfectly. Unusually this turntable has the power supply onboard and an IEC mains inlet, making it a little tidier round the back.

The +M derivative indicates the presence of MoFi’s top cartridge. The Mastertracker is a moving magnet type (as are all MoFi cartridges) with an aluminium body. It has a micro-line tip on a tapered aluminium cantilever connected to what MoFi calls a V-twin dual magnet generator and Japanese OCC coils.

The UltraDeck is easy to use: the peg on the headshell isn’t big but has a rubbery feel that makes it easy to pick up and it’s easy to change records without stopping the motor. Our sample was supplied with a ‘Super Heavyweight’ MoFi record puck. This is a three-inch aluminium weight with a soft base and no inconvenient thread to do up. It weighs 367g which doesn’t sound ‘super heavy’, but I’m informed that MoFi has borrowed from boxing terminology to convey its ‘knockout’ effect. MoFi is also keen to point out that 367g is calibrated for best results across a range of turntables. The HRS (Harmonic Resolution Systems) design uses proprietary tech inside and on the contact surface to help eliminate more noise and distortion than a standard weight, so I’m told. As in Tai Chi, it isn’t the weight per se, it’s how you use it, and it seems to work!

I mentioned earlier that the counterweight setting point needs a little time to get right. This was apparent when playing the first few records on the UltraDeck, all of which sounded surprisingly bright and forward. Reducing the downforce to the 2g midpoint transformed the balance to something more neutral. I actually wondered if the cartridge was overloading the Trilogy 907 phono stage but it’s specified at a fairly conventional 3mV so it shouldn’t do this. MMs do have a lot more energy compared to MCs (even with the extra gain from a phono stage), so if you’re after immediate impact, MM designs nearly always oblige. Correspondingly the sound of this deck and cartridge is muscular and substantial; a little dark through the lower mid perhaps but reassuringly solid and calm, which makes for relaxed listening even at higher levels. It also makes for good three dimensionality because the bass is firmly planted, lending higher notes greater structure and presence.

Adding the Super Heavyweight puck increases the 3D effect and improves tonal depth, especially through the midrange. Timing likewise jumps up a step or two. The UltraDeck+M is still a smooth-sounding assembly, but the puck adds extra grip, if you’ll excuse the pun. 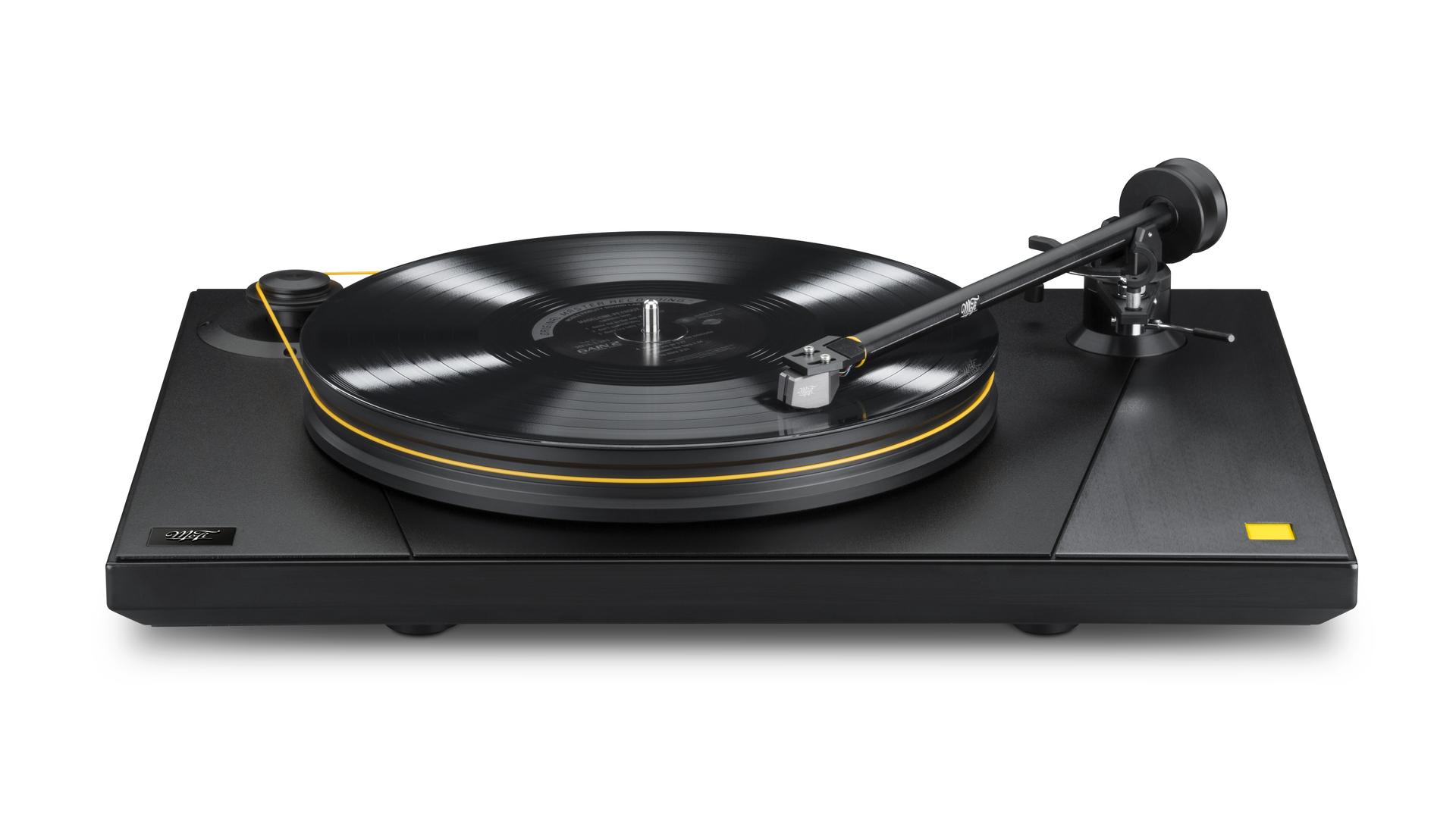 I played an old favourite in The The’s Soul Mining [Some Bizarre/Epic] and loved the instrumental layering: the presence of an accordion being the most obvious discovery. Patricia Barber’s ‘Company’ [Modern Cool, Premonition] has slightly OTT bass and that comes through here, but so does a sound that totally escapes the speakers, bringing unusual definition to the voice and its surrounding ambience. There’s great depth to the instruments on the excellent Alive in the East by Binker and Moses [Gearbox] but this time I fancied it lacked the atmosphere I’d heard using a good MC. To check this I installed a Dynavector DV-20X2L which is about the same price as the Mastertracker (£799 when bought separately) and paired it with a Tom Evans Microgroove phono stage. This told a different story and much more to my liking (I must declare a preference for MC). Better treble definition gave the sound snap and immediacy. Steely Dan’s ‘Bodhisattva’ [Countdown to Ecstasy, ABC] gained pace with Jeff ‘Skunk’ Baxter’s guitar having more vitality. For me, the MC install improved separation, detail resolution and timing, making the music more engaging. A replay of Patricia Barber’s ‘Company’ now had power and dynamics with considerably greater fleetness of foot.

And here’s the rub. Wherever you sit on the MC/MM divide, the real star has to be the UltraDeck itself. It tells you why Barber’s Company is such a great recording. I spun MoFi’s One Step 45rpm pressing of Blood on the Tracks (Bob Dylan, as if you didn’t know) on the UltraDeck to expose so much more bass detail than is possible from regular audiophile cuts, and greater fidelity in the vocal on ‘Idiot Wind’. I played two further pressings of this album for comparison and each sounded different. The MoFi turntable had no difficulty in differentiating them.

My preference is for MC. Yours, along with MoFi’s, may favour MM. If this is the case I’d suggest that the UltraDeck+M is an excellent midrange system. A trip to your nearest MoFi dealer will confirm your favourite flavour. Either way, the UltraDeck is a serious turntable; the first from a record label with so many references at hand.