Until now the Romanian firm Meze Audio has been best known for its excellent and affordable 99 Classics headphones, which offer incredible value for money. However, for over two years Meze has been hard at work developing an extremely sophisticated, ultra high-performance, cost-no-object headphone called the Empyrean (£2,699, $2,999).

The Empyrean can without exaggeration be called a work of industrial art; it is extremely comfortable, well made, and lovely to behold. At the top is a carbon-fibre headband beneath which is suspended a leather headrest support strap with patented ‘support wings’. All metal frame parts, including the finely filigree rear grills, are CNC machined from solid aluminium (the process takes about 20 hours). Angled mini-XLR-type signal cable connectors protrude from each ear cup housing, while high quality OFC cables with various termination options are offered. Completing the picture are two sets of magnetically attached ear pads, one with Alcantara covers, the other clad in leather. 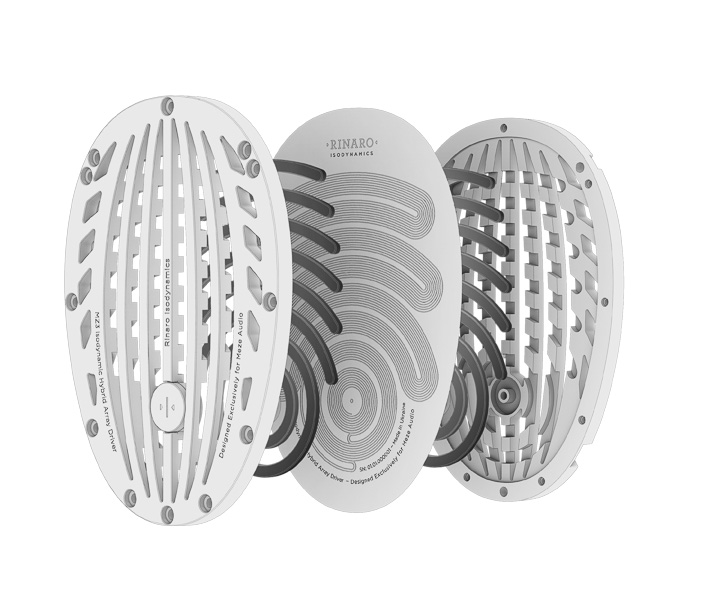 Rinaro’s hybrid array Isoplanar driver is Ovoid-shaped and features a diaphragm made of a custom isotropic thermally-stabilised polymer said to be “ultralight yet rigid”. Significantly, the driver features two distinctly different voice coils trace patterns. Down near the narrow tip-end of the ovoid is a spiral coil said to be “more efficient at reproducing middle-high frequencies”, while in the wider upper sections of the ovoid Rinaro uses a serpentine ‘switchback coil’ claimed to be “more efficient at reproducing low frequencies.” The result is a crossover-less, mechanical two-way driver, where the mid-high frequency sections of the drivers are deliberately positioned over the wearer’s ear canals to minimise time delays.

The driver features sandwich-like construction; on the outside are front and back fibreglass-infused ABS frames within which are front and back neodymium magnet arrays, and at the centre of which is the diaphragm. Meze says the resulting driver is sensitive, offers high resolution, and is extremely low in distortion (Meze claims it to be, “under 0.1% in the whole audio frequency range”). It also incorporates features to improve efficiency while minimising stray magnetic fields directed toward the wearer’s head.

As I began evaluating the Empyrean, I quickly learned two things. First, the headphone initially sounds good, but perhaps a little softly focussed and dynamically reserved. It needs substantial run-in time (>100 hours) before it opens up to achieve optimal resolution, transient speed, and dynamic acuity. Second, the Empyrean proved very sensitive to the quality of ancillary amps and DACs; plan on using top-shelf electronics to hear the Meze at is best. 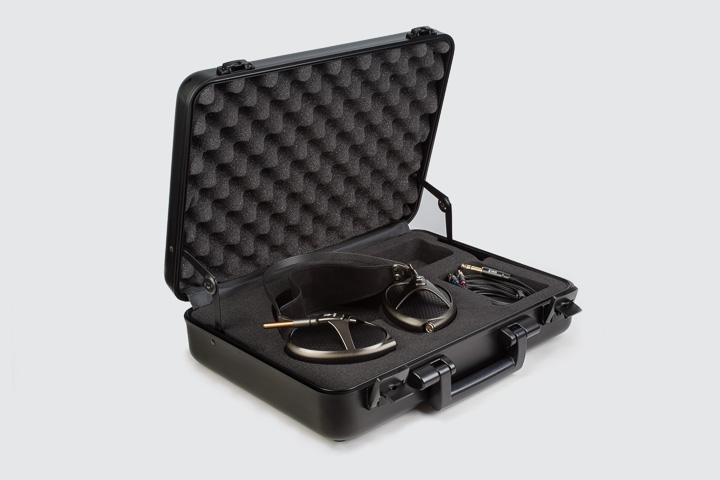 At its best, the Empyrean offers neutral (yet never austere) tonal balance, extremely fine levels of resolution for both textural and transient sounds, expressive dynamics, and an almost casual-sounding, offhand quality of sonic naturalness. Candidly, I suspect some listeners might miss what the Meze does right, precisely because it is less about serving up hi-fi pyrotechnics and more about ‘going deep’ with the music.

As an example, try ‘Walking On the Moon’ from the The Yuri Honing Trio’s Star Tracks [Jazz in Motion, 16’/44.1]. The track begins with a subtle, softly plucked figure from bassist Tony Overwater, whose call is later answered by an expressive response from percussionist Joost Lijbaart. Then, the proceedings really take shape when Honing joins in on his saxophone. In each case the timbres and dynamic qualities the instruments sound spot-on and incredibly engaging. Major sonic treats include Honing’s powerful, evocative sax solo in the middle of the track and several dramatic bass and percussion exchanges along the way. Stated simply, the Empyrean creates large believable soundstages and the sort of gripping, you-are-there realism that’s rare to find in any transducer, regardless of type.

If you give the Empyrean time, it will reward you with a rare combination of balance, finesse, and all-round expressiveness. It is only with extreme reluctance that I must force myself to give these headphones back to Meze.