Merrill Audio is a relatively small company with a relatively big idea. It’s out to make the best and most uncompromising audio amplifier electronics out there. The Element 118 mono amps are just one example of how it intends to do just that. These are big, powerful mono amps that give and demand no quarter from music lover and system alike. That’s the Merrill way!

The name itself shows just what I mean by uncompromising. Element 118 is an artificially produced radioactive element called Oganesson. Scientists know enough about Oganesson to know almost nothing about it, although it was discovered in the 2000s because after bombarding californium with calcium ions for 1,080 hours, they had produced precisely three atoms of Organesson, which had a half-life of 0.89 milliseconds. From this, we can conclude Merrill Wettasinghe of Merrill Audio is a bit of a science nerd; no-one else would name their amp after a super rare element, and that the scientists who discovered element 118 don’t get out that much. I’d also argue that 0.89 milliseconds is about as long as you need to listen to the Element 118 mono amps before you realise just how good they are! 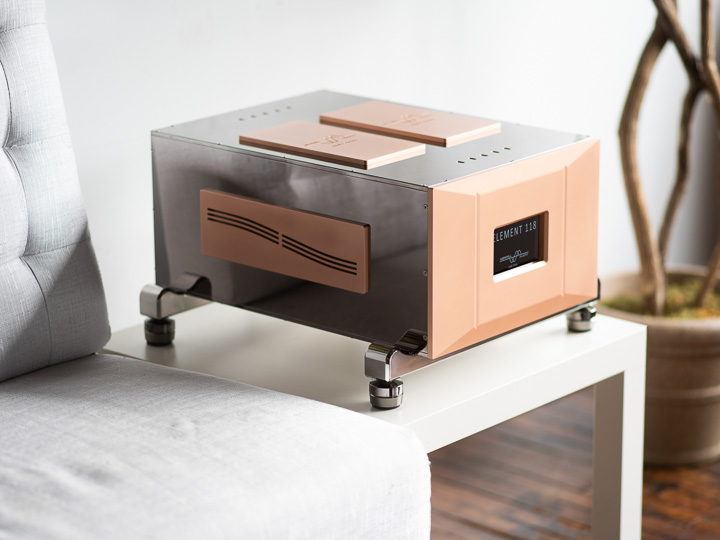 Even by Merrill’s uncompromising standards, the Element 118 is pretty out there. It’s the most ambitious audio project Merrill has ever produced. And we’re back to drawing parallels with that name again; Merrill claims the Element 118 “reflects the newest in technologies”, which means a Class D design using fast switching gallium nitride transistors that can work to a wide-bandwidth up into the GHz level.

Let’s lay a great audio ghost to rest: the audiophile’s irrational fear of Class D. OK, maybe not completely irrational; early samples were pretty awful in musical terms, but it’s also worth remembering that was more than 20 years ago, and things have moved on. Just as those first steps in transistor amplifiers like the Leak Stereo 30 had little in common with a mid-1980s Krell power amplifier, so we need to get past the knee-jerk Class D reaction that is not for audiophile use (a notion that still plagues good audio) and move on. The Merrill 118 is probably too rare to stage the fightback to prove just how good Class D can be, but the proof is in the listening.

Merrill has chosen to go with Class D not because it’s small or that it runs cool, although that last is a handy by-product. Instead, it’s chosen because it’s the right technology to deliver a good sonic performance. Of course, it’s capable of delivering a good performance if you know what you are doing, and Merrill clearly does.

The level of uncompromising (that word again) dedication shines through everywhere in the Element 118. For example, the amplifier is balanced only and doesn’t even have an on/off switch. The chassis is nickel plated with rose gold panels and sits on outriggers with Iso Acoustics Gaia II footers on each, making it a very stable platform.

This barely scratches the surface. Merrill is convinced that speed is the most important consideration in the design of an amplifier. According to Merrill, a fast amplifier “requires stable circuitry with accurate reproduction capability during extreme speed occurrences. Since overshoot and ringing are the most significant obstacles of speed, the Element 118 amps are carefully crafted to maintain this high speed and are engineered to eliminate the anomalies that cause overshoot and ringing.” So, PCB boards are manufactured to the highest standards and further engineered for greater temperature stability. And with 3.6kg of pure copper per amp, heat management and distribution keeps a steady temperature environment on the PCB boards, a condition essential for consistent and high-performance linear operation when the amps are pushed to the limits.

To also create that stable power amplifier circuit, Merrill has used a range of technologies, from PCBs designed to limit parasitic inductance to new fabrication techniques. But perhaps most crucial of all is Merrill Audio’s ZXOL circuit featuring a completely open loop design zero feedback design! No feedback designs are relatively common in valve circuits but not so much in solid-state designs. Eliminating feedback has two distinct advantages, though;  speed capability is increased significantly and a gain in the clarity of musical information is achieved. Since there is no signal loopback, all the feedback loop distortions, as well as the attendant time delays, are eliminated.

The Element 118 Power Amplifier Monoblocks were engineered with what Merrill calls “360-degree integration” in mind. This process involved evaluating all factors that contribute to the amp’s sonic performance and then only selecting those aspects that will accomplish that goal most effectively. That goes right down to the speaker terminals, which use the latest top of the line Speaker Binding Posts from WBT featuring direct copper posts.

All of this technological sophistication is as nothing if the thing doesn’t sound any good! This was the trap the early instigators of Class D suffered, as the potentially great system just didn’t sound any good. But the Element 118 could be almost a proof of concept because as power amps go, it’s one of the best. 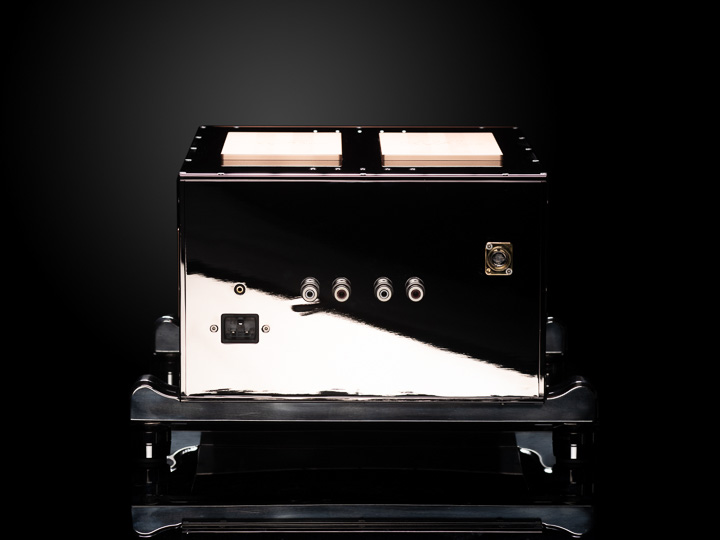 A crucial aspect of the sound is that speed Merrill strives for. This is no small deal, as the Element 118 really shifts up a gear. There are a handful of amplifiers that create a sound as fast and as precise as this, but one of the few that is still in production is DarTZeel. The two have a lot in common sonically, although the Element 118 is perhaps even more neutral-sounding than the Swiss triumph. This comes across in every piece of music you play, and it comes over quickly too; that two-second piano scale at the start of ‘Misty’ on Donny Hatherway’s Everything is Everything[ATCO] says it all. It’s vibrant, in the room… and what follows is one hell of a voice. The speed of the Merrill means there is no overhang or limits imposed upon his soaring voice. Just those first few bars led to a complete Donny Hatherway tip for a while, and at each point you got a sense of temporal ‘rightness’ that was backed up by an extended and fundamentally accurate presentation. In particular here, although the voice is front and centre, that whirlwind speed means the amplifier is a master at playing horn sections. They are played without any sense of overhang or slowing of what can be a very fast-paced instrument.

That speed is backed by a dynamic range that borders on the infinite, and I think here more than anywhere the Merrill design shows just how weak the anti-Class D argument really is. Mahler’s Eighth [Solti, Decca] on Class D is supposed to sound a bit grey; here it simply flies along, full of musical energy and sheer musical joy. Couple that dynamic range with the speed of the design and a very refined coherence falls out of the mix, too.

A perfect partner here is the most logical one – Merrill’s own Christine Reference preamplifier. Apart from it being a stylistic match, aside from the Element 118 taking a lot of its design cues from the Christine, the two fit into the same category of ‘lightning-fast reflexes’. It’s a formidable combination and one that really rams home what Merrill is trying to do here. These are two of the fastest and best amps out there, regardless of the name on the front or price tag hanging off the rear.

In fact, the only limits on this are Merrill’s own uncompromising qualities written through the product in red ink. On a trivial level, the absence of single-ended connections and off-switch will aggravate some, and might even restrict sales in some countries. Not necessarily on matters of legality, but more in terms of perception on the part of the listeners. Similarly, the Element 118 doesn’t suffer musical fools… at all. Play a ropey bit of old chart material from a compilation CD from a few years back, and the sound is rendered fundamentally unlistenable because it is thin and flat and compressed. 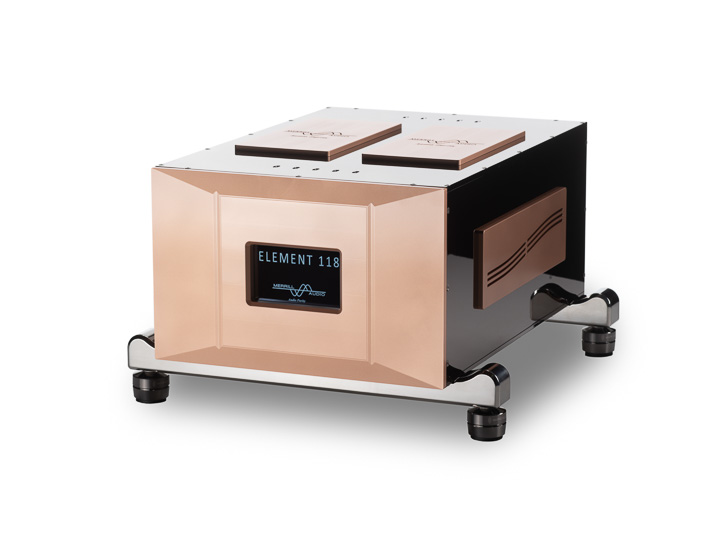 The high-ender’s lament – that there are few good preamplifiers – should be extended to include power amplifiers too. Really good ones are thin on the ground. But as soon as you hear a really good one, like the Merrill Element 118, you know what you’re missing! Most seem to either accent something at the expense of other things, or colour the sound, or in the case of very big amplifiers, slug the sound. The Element 118 shows this is, in fact, a false dichotomy, because you can have big and powerful, and have it with good imagery, and have it with excellent pace, rhythm, and timing. You just need to know what you’re doing! Merrill and the Element 118 show they clearly know what they are doing when it comes to making power amplifiers!