McIntosh is something of a law unto itself in audio. Few companies share McIntosh’s fan base, which have been fanatically loyal to the brand for decades, to the point where faced with the choice of no McIntosh product in that sector, they would rather wait than buy beyond the brand. And, to reward their followers for their loyalty, McIntosh’s design is unchanging. The MB50 is perhaps the perfect expression of this; if there were such a thing as a streamer from the 1960s, this would be it. Not because the MB50 is technologically stuck in the past (far from it in fact), but because the design would blend seamlessly with McIntosh products from the era of the Beatles and the Beach Boys.

This timeless design works massively in McIntosh’s favour, I believe. The distinctive glowing green lettering on a mirrored black fascia, with highly polished sides and end plates, and side uprights of aluminium mean the MB50 could only be a McIntosh product. It will fit effortlessly in with all other McIntosh products made since the Eisenhower era (and that’s a huge number of prospective owners), it is distinctive and well made enough to act as gateway to McIntosh for those not with the programme, and it’s built with longevity stitched into its very weft and woof. Ten years from now and practically every product in your system might have been discontinued, but the MB50 will not only look as fresh as ever, but also still be serviceable thanks to McIntosh’s legendary reliability.

The MB50 is a half-sized device, designed to sit beneath McIntosh’s MHA150 headphone amp or MXA70 integrated audio system launched a few years ago. That brings its own DAC and line inputs, along with a 50 watts per channel amplifier, and even a pair of small standmount loudspeakers. Having a DAC on the MB50 and another on the MXA70, and a headphone output on both devices means there is some redundancy involved, but a few redundant systems are par for the course with McIntosh, and that is part of the reason why McIntosh fares so well on the ‘buy again’ stakes. It also suggests that even those who began their McIntosh ownership with the MXA70 have already learned the company’s core maxim: the only thing better than a McIntosh is another McIntosh.

The curious thing about McIntosh owners is that they aren’t quite as obsessed by famous name brands within the product, just so long as it has the right logo on the outside. They embody those who nodded approvingly when hearing of the old Rolls-Royce response to questions about horsepower or torque… “it’s sufficient, sir!” Where every other DAC maker proudly discusses who made the chips and how good they are, McIntosh is content with just describing this as a 24-bit, 192kHz compatible device, albeit one with a lot of additional functionality. This is not ‘mystery meat’ digital, however, and the MB50 actually sports a Cirrus Logic 8416 chip, which puts DSD beyond its capabilities, but is a perfectly serviceable chipset with a no-nonsense reputation. It’s virtually the same design as fits inside the MXA70. The MB50 is powered by a 5V wall-wart power supply.

Where the MB50 shifts into higher gear is its connectivity, especially its wireless connectivity. It has the usual coaxial and optical S/PDIF inputs and outputs, as well as an unbalanced line input and unbalanced and balanced line outputs. It also has a pair of trigger connections and a USB A connector at the rear, although this last is for firmware upgrades rather than actual digital connection. Where it comes into its own is the two Wireless LAN inputs either side of the rear panel. These connect the MB50 to high-res Wi-Fi streaming services around the home. It works using DTS Play-Fi as a complete access point for DLNA local streaming services, and to connect to the likes of Spotify, Deezer, and TIDAL (in the UK, and also services like Pandora, Rhapsody, and SiriusXM in the US). Play-Fi’s app acts like your music pal for all things McIntosh, here. This is no bad thing, either, as it’s generally far more complete than some homebrewed app software, or glomming onto the work of a third-party like PlugPlayer.

The lack of both a USB B input and a wired Ethernet connection might give some pause, and I’d certainly like to see them in a device at this price. It’s no deal-breaker, however, although in fairness my room is like a sea of Wi-Fi soup in which products like the MB50 can easily swim: yours may not be so wireless-friendly. But that might also make the Play-Fi pathway not quite as accessible. And while Play-Fi talks to iOS and Android, I’d like for wider wireless accessibility, such as Bluetooth and AirPlay. But Play-Fi does make a strong case for being the only game in town. 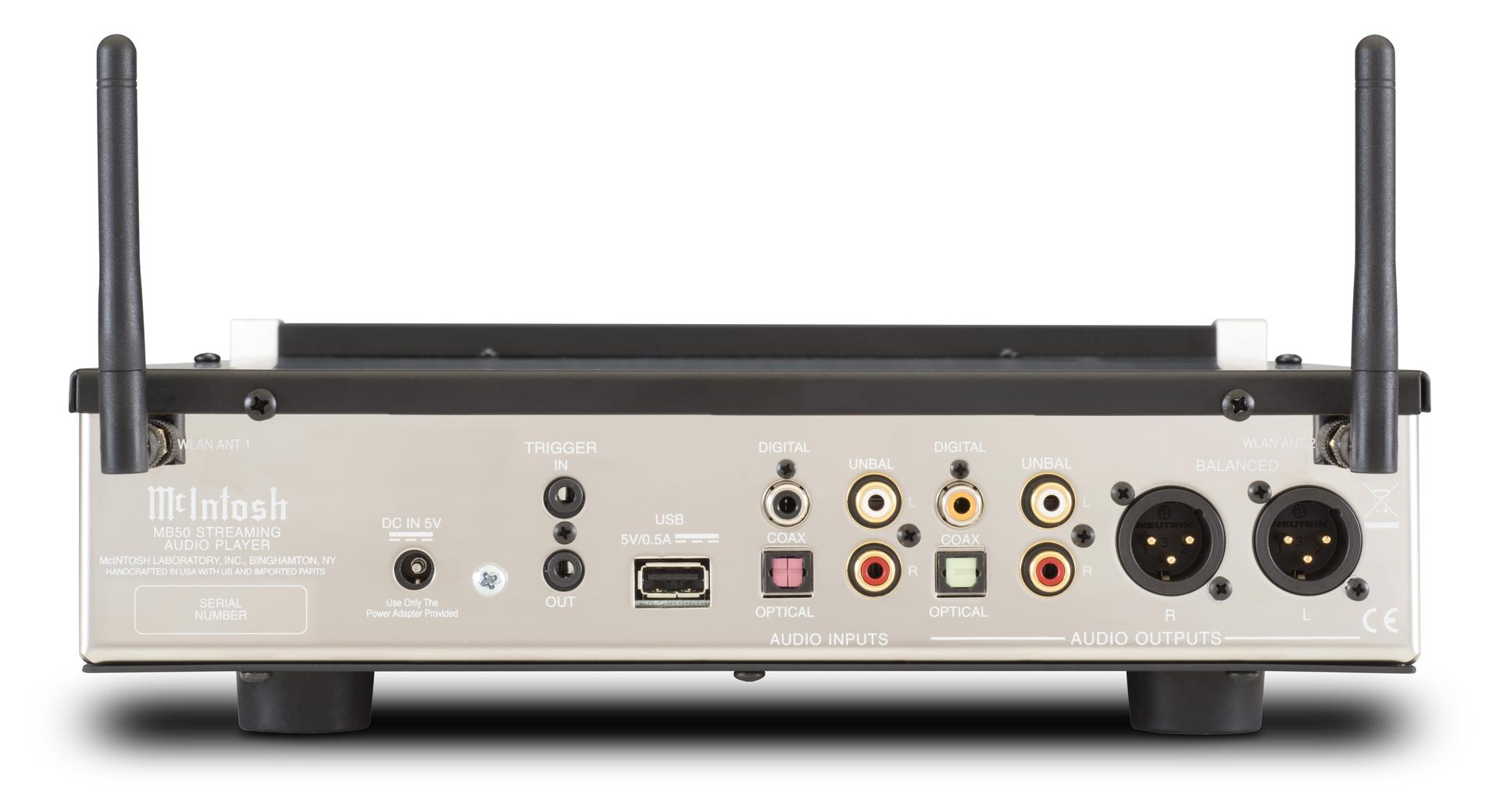 The reason why Play-Fi makes such a strong case is that it treats sources hooked to the MB50 as streamable signals to be distributed around the house to other Play-Fi compatible devices. Plug your turntable and phono stage into the MB50’s line input, for example, and suddenly you can play your LPs around the house without having to cart a turntable and phono stage into other rooms in the house. This certainly seems like less hassle than the alternative of digitising your records in advance (we’ve all tried that and after record number three, tend to want to commit war crimes in a pressing plant as a result). Unfortunately, with just the one Play-Fi ready product at home during the time of the MB50 review, this is more a ‘notionally clever’ but principally untested idea than a definitive ‘it works, and it sounds great!’ aspect of the review.

The MB50 took a little while to come on song, about a long weekend from cold. At first it sounded accurate, but somewhat shut in and oppressive sounding. So I left it to its own devices for a few days and returned to a more vivid, expansive presentation. I had a couple of very early signal drop-outs when first testing the MB50, but it seemed to ‘learn’ my network quickly, and any such hiccups were soon forgotten. In fact, that ability to forget it’s there is the MB50’s great strength. It simply doesn’t draw attention to itself, and using Play-Fi means you quickly treat the MB50 like it’s a simple device in the chain.

The overall sound is inviting, the perfect antidote to the shrill top-end that people normally associate with wireless digital audio. It’s smooth and refined and incredibly easy to listen to, with a rich lower midrange and bottom end. The bass is deep, but not overtly, cavernously so; bass lines like that of Jerry Jemmott’s on ‘Memphis Soul Stew’ [King Curtis Live at Fillmore West, ATCO] were fast and taut, but Bernard Purdie’s kick drum placed the accent on the speed of his drumming rather than the depth of the bass.

Play-Fi makes this exceptionally easy to access, too. It works like a tablet-sized digital hub, pulling together music from your server and the internet without a care, and the MB50 plays them without prejudice, but with a lot of image space and depth. Dynamics and detail are excellent too, more than good enough for even the very top systems. But it’s the effortlessness of access that Play-Fi brings coupled with the effortless of presentation from the MB50 itself that makes this the perfect digital streaming partner.

It’s perhaps no great mystery that the headphone socket is not up to the standard of devices like the MHA150, because McIntosh doesn’t necessarily want the MB50 to cut into sales of the dedicated headphone amplifier; it wants people to buy both. The headphone amp on the MB50 falls into the ‘perfectly serviceable’ mode as fitted to many good amps, DACs, and receivers. It is even-natured, with good overall performance and a particularly good tonal balance, but it isn’t the most dynamic or the most willing to drive difficult headphone loads.

The McIntosh MB50 is a remarkably versatile device. It’s a first toe in the streaming waters for many McIntosh users, it’s the obvious next step for MHA150 and MXA70 users, and for some it might be their first McIntosh product. It’s capable of standalone use, although I’d recommend using it in conjunction with an amp or headphone amp, and it communicates to the outside world effortlessly using the Play-Fi app. It’s not without idiosyncrasies – the lack of wired DLNA streaming seems a notable exclusion – but the potential for using this as the start of an ad hoc Play-Fi network does offer future promise. Recommended.

Distributed in the UK by: Jordan Acoustics