If something’s worth saying, it’s worth saying twice; Lateral Audio Stands’s nomenclature sounds like it comes from the world of military hardware or hard sci-fi. The LAS-9 Cadenz could be an equipment support system that leverages much of the company’s top-end performance at an even keener price, or it could be a battledroid drop-ship plummeting through the atmosphere of the planet of the dog-lizards. Given the title of the magazine, I’m going with ‘equipment support’.

Lateral’s original LAS-4 Integral (reviewed in Issue 173) is a high-end equipment support system, and LAS-9 Cadenz is designed to deliver many of the goals of the Integral at a significantly lower price. Note that even LAS-4 Lateral breaks the link between ‘high-end’ and ‘high price’; there are many support systems that produce similar performance improvements to Lateral’s systems that cost several times more. However, where many companies produce a lower cost model by cutting corners on the original design, Lateral Audio went back to the drawing board with LAS-9 Cadenz; the two share basic concepts, but the approach taken to achieve those concepts is very different.

At first glance, LAS-9 Cadenz is very much the traditional modular equipment stand, with four screw-in tubular uprights at the corner of each platform, with contrasting finials for the top plate and spikes at the bottom. You can choose anything from two to five tiers, with 120mm, 160mm, 220mm and 280mm uprights to accommodate anything from narrow DACs to chunky power amps. It will hold up to 25kg per level on the upper tiers and 35kg on the lowest level. The vicious looking LAS Counterpoint spikes and optional full set of spikes and feet finish the look. 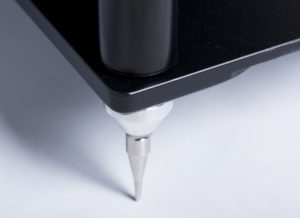 Looks can be deceptive, however. There are a lot of clever techniques used to help dissipate vibrational energy. Those uprights, for example, are not simply well-finished tubes, but end with a Delrin cap to reduce any hysteresis effects those uprights might introduce. Then, if you flip over one of the platforms, a pattern that Lateral calls its ‘Dissipation Array’ is cut deep into the underside of the board itself effectively ‘wicks’ vibrational energy away from the device that sits on the platform.

As mentioned, LAS-9 Cadenz offers a substantial saving on the original LAS-4 Integral, and yet doesn’t compromise on performance. More importantly, I think it offers the best balance of price and performance to demonstrate just how important the support system is to those who are taking their first steps into ‘real’ audio. The original is an even bigger step in the same direction (in a very high-end system, I could also see someone using the Integral for the main components in a very large system, with the Cadenz being used for power supplies and secondary devices, such is the dove-tailing of performance between the two).

In a very real way, Lateral’s LAS-9 Cadenz has a tougher job to do than the original LAS-4 Integral because it must convince those who think ‘furniture’ can’t make a difference to the sound of a system, as well as those more convinced by the effect of a ‘proper’ equipment support system and wanting to check out what Lateral has to offer. By way of contrast, LAS-4 Integral is almost ‘preaching to the choir’.