In the annals of history, 1969 is best remembered as the year the Keith Monks Audio Laboratories RCM (record cleaning machines) first appeared; sure, some dimly recall Woodstock and a guy called Neil Armstrong walking on the Moon, but the cognoscenti know the truth. The original Keith Monks machine was large and very expensive but wasn’t really aimed at consumers; more at libraries or broadcasting stations needing a battleship for intensive daily use. With the vinyl revival, interest in cleaning records restarted and – now run by Keith Monks’ son Jonathan – Keith Monks Audio Works is back, and with more domestically-friendly models, too.

The original Keith Monks RCM set a very high standard and was extremely well thought-out. It established the benchmark by which all other cleaning machines would be judged. The Keith Monks used a Lenco GL-69 turntable with an idler-driven 12in platter spinning at about 80rpm and featured an arm that moves slowly from the centre of the disc to the outer-edge and in the process sucks the liquid off the surface – taking all the dirt with it and leaving the surface of the disc clean and dry. That’s it, basically… job done. 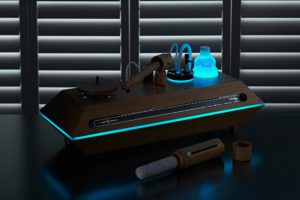 Fast forward more than half a century and the current generation of Keith Monks machines perform the same function in a very similar manner; the new Prodigy is, in essence, a smaller, cheaper version of Keith Monks’s big RCMs. It’s very eco-friendly, being made of bamboo. Aesthetically, the Prodigy is also very pleasing to look at. Lit from within by strips of LED lights, you can select a constant colour, or a shifting rainbow of colours. It looks super-cool and ensures the Prodigy has more sex-appeal than all the other RCMs combined!

Like its bigger brothers, it features a turntable and motorised arm with a suction nozzle. You wet the surface of the LP and then place the arm at the edge of the centre-label. The Prodigy has a small platter the size of an LP label which turns at about 60rpm but this is no sacrifice, as I thought 80rpm always seemed a wee bit fast – sometimes it made the water come swishing off and the reduced speed of the Prodigy’s turntable is a welcome change from splattered shirts. But platter speed also determines how fast the suction arm moves. If the platter turns slower, then the suction arm will reduce speed in order to clean the LP surface evenly, without leaving gaps.

The Prodigy’s suction arm moves quite a bit slower than the full-size Keith Monks machine. It takes around 2m 40s to traverse an LP side. My original RCM takes 52s – about three times faster. The other major change concerns the Prodigy’s suction nozzle; it does not use a protection thread.