I wonder if Jeff Rowland ever read EF Schumacher’s popular tome Small is Beautiful, a guide of sorts to the benefits of keeping a business small, a state of affairs that many audio manufacturers have taken to heart, albeit not necessarily by choice. The Capri S2 preamplifier also embodies that philosophy: it is no bigger than it needs to be. In fact, by American high end standards it’s positively portable at just over 35cm wide, but it’s also pretty dense as the 4.26kg weight attests. Construction is typical Jeff Rowland machined-from-solid aluminium; his products always look great but that beauty is more than skin deep. But the skin is misleading; those peaks you see give the impression that the surface undulates, but close inspection reveals it to be totally flat.

In its standard state, the Capri S2 is a line stage with two single-ended and two balanced inputs plus a home theatre bypass, which seems an unusual input array for what appears to be a purist product. But ‘home theater’ is bigger in the US than in many markets, and even audiophile brands have to cater for market trends once in a while. Usefully, if you don’t want this feature, an internal jumper can transform it into a regular, volume controlled input. Output is via RCA and XLR and that about covers the back panel. Behind the inputs is transformer coupling circuitry chosen for universal compatibility with different sources, identical gain for unbalanced inputs and noise rejection. This isn’t a TVC (transformer volume control) however, such things being solely the domain of passive components.

The volume control has usefully small increments of half a decibel that can be achieved with the remote control or the beautifully turned knob. The latter is speed sensitive, so can give you big changes quickly as well. The easy to read volume display can be switched off with the handset or you can move an internal jumper that turns it off after five seconds if its yellow/green hue offends. The remote is not as impressive as the casework sadly, but that keeps costs down, it has mute, phase and channel balance switches alongside the usual volume and input selectors.

The compact size is aided by the fact that this Jeff Rowland, like the majority of products from the brand, has a switch-mode power supply, so there’s no need for a big mains transformer nor for different transformers to suit different mains voltages. The supply is described as a low noise, high current, dual regulated switch-mode, which is still quite a rare feature in the high end outside of products from Linn and Chord Electronics. However, the day cannot be far away when the puritans in high places decide that any products that draw more than a few watts are the spawn of Satan and banish them from our systems, so it could be a canny move.

Despite the diminutive nature of the Capri S2, it has space inside for an optional circuit board, which can be phono card that converts input 1 into an MM/MC input with three gain and loading options. Alternatively, you can get a plug-in DAC card that converts input 1 into an S/PDIF coaxial input that’s good for PCM up to 24-bit/192kHz. It would be more appealing if there was a USB connection but naturally there isn’t such a socket on the preamplifier in its line stage guise, which limits the DAC’s appeal to the streaming generation unless they have a bridge with coax out such as the AURALiC ARIES. Sadly, there is no provision for DAC and phono, as they both plug into the same slots.

I initially hooked the Capri S2 up to a Marantz SA-10 being used as a DAC, and connected my regular ATC P1 power amplifier with Bowers & Wilkins 802 D3 speakers. The Marantz was still running in so I didn’t expect too much, but hearing Emma Kirkby’s voice on Handel’s Messiah [Academy of Ancient Music, Hogwood, Loiseau Lyre] it was clear that things were working rather well. This is obviously a great recording and in the Capri’s hands, it takes on a depth of image and richness of tone that is very appealing, thanks to strong presence from the singer in particular. It inspired me to try the same thing with the CAD 1543 MkII DAC and a direct USB link to the Melco server (previously I used an ARIES LE between the server and DAC). This brought out more of the depth and openness of the recording, producing an unusually natural, even sublime sound from that voice. As I’m not that familiar with the recording I substituted my even more diminutive preamp of reference, the Townshend Audio Allegri. This passive device went further in terms of transparency and openness again, indicating that the Capri S2 while clearly very neutral and revealing does add a subtle polish to the sound; a slight veil that is hard to spot on it’s own but becomes apparent with the contrast.

Returning to the Capri S2 and Alice Coltrane’s ‘Journey in Satchidananda’ from the Impulse album of the same name, I was encompassed by the heavy sound of double bass and sparkle of percussion, harp, and drone. What struck me here was how well the preamplifier tracked the micro-dynamics of the various instruments, the changes in level between notes being particularly well presented. The sound remains slightly constrained overall compared to a passive, but this doesn’t get in the way of musical flow or detail. In fact, it’s replete with the nuances of the various instruments in the mix, all of which are well separated and easy to follow. The composer’s harp playing being particularly well resolved in the context of such a broad acoustic cosmos, and when it sounds this good it’s hard not to drift away on the vibe. 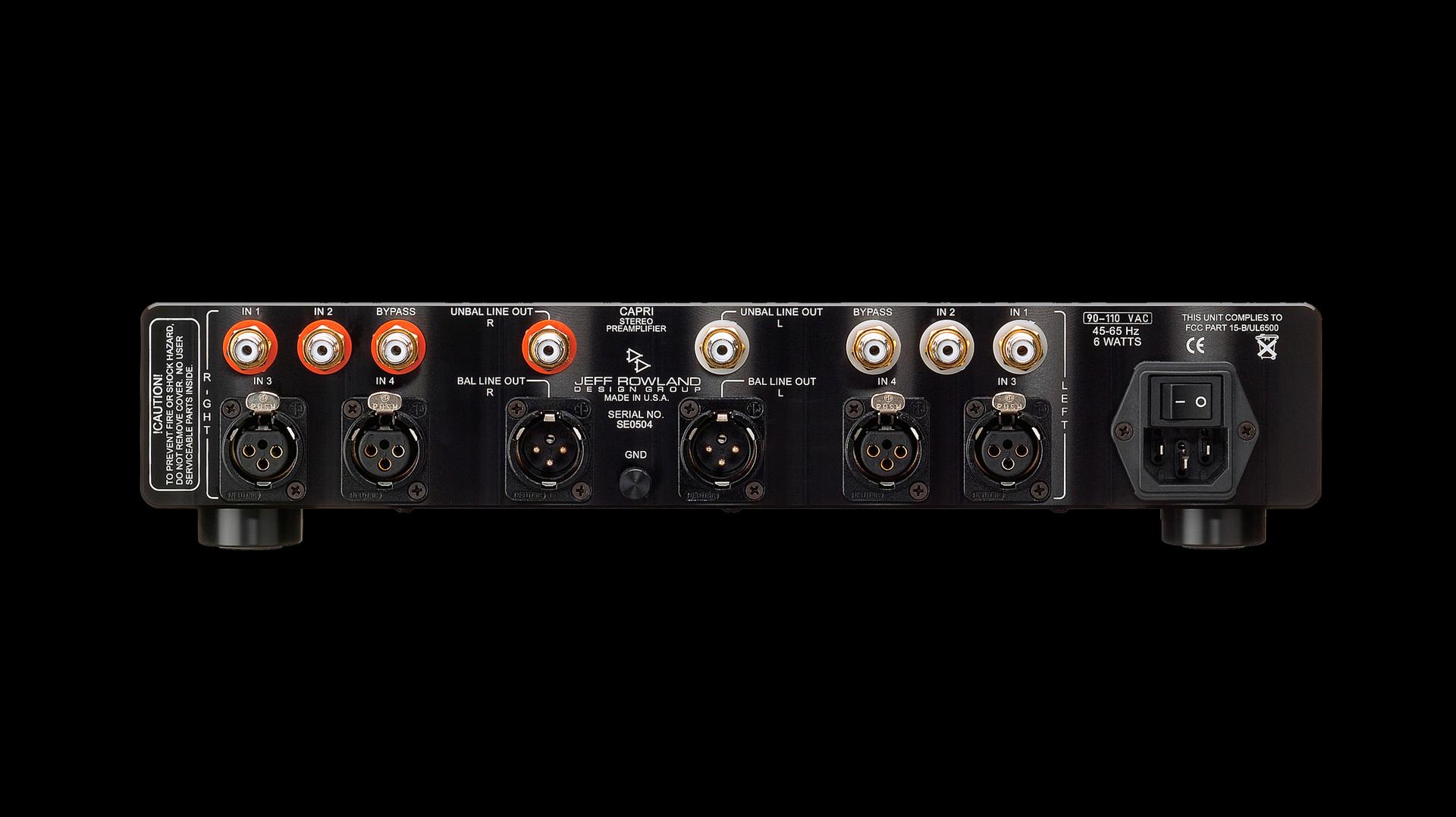 A stiff drink (Assam tea) later, I had pulled myself together and got down to the tough but necessary task of further listening. Up to this point, the Capri S2 had been connected to the power amp with single ended cable, but given Jeff Rowland’s clear predilection for balanced connections I tried that instead. This made small but worthwhile improvements to the results, notably with regard to low-end gravitas. The bass now had more authority, which is not an uncommon finding in my experience, but the image seemed to have greater depth and more clear-cut layering. Even lyrical intelligibility seemed better with the Messiah piece, so listening continued with this connection. Timing is not the Capri S2’s strongest point but neither is it disastrous; alternative preamps do seem to get to the rhythmic parts more effectively, but they frequently lose out too much elsewhere. The emphasis here is more on detail resolution, which makes it easy to listen right into a piece of music and understand what each instrument or voice is contributing. That means that complex pieces no longer seem so dense for instance, which is a good sign of coherence. It also gives each note it’s due weight in terms of attack and decay, which is the opposite to a fast sound I guess and one which suits material where the emphasis is on melody rather than transients. But, the Capri S2 treads a careful line between the melody and rhythm, and remains diffidently neutral at all times.

It’s worth noting that this Jeff Rowland does not sound like it has a switch mode power supply, as there’s no graininess or brightness at all. In fact, it couldn’t be smoother, it’s the most polished SMPS device I’ve encountered. And this does the Capri S2 a lot of favours when bringing out the tonal richness of everything you play. It’s not just classical sopranos who benefit; Tom Waits’ ‘In Shades’ [Heart Attack & Vine, Ayslum] also has great depth to the guitar and organ, and the burble of the dining audience is clearly separated from the music, a result in part of the impressive low level resolution on offer. This is a very quiet preamp indeed, which means that very little fails to get to its outputs. This in turn means there’s plenty of dynamic range available in the resulting sound.

At first glance, the price seems pretty high for such a compact device, but the Jeff Rowland Capri S2 is not only superbly built, finished and thought out but its sound quality has a similarly deep sheen. Size matters when it comes to some things – loudspeakers, listening rooms, cakes – but small is clearly beautiful where preamplifiers are concerned.