If you have a long memory for YouTube videos, you might recall the graduation documentary from a Goldsmiths College student that was all about the Athens Audiophile Society. While that documentary was more mocking than the society might have liked, anyone who thought Greece doesn’t take its audio seriously was effectively silenced by that video. Greece also has a small, but vibrant and growing, group of audiophile manufacturers, including Athens-based Ideon. The company was founded in 2016 by CEO George Ligerakis and chief engineer Vasilis Tounas who, together with two like-minded professionals, concentrated on making the best in digital audio regardless of cost.

Ideon’s range is therefore small, but beautifully formed; two DACs, two clocks, two streamers, a USB reclocker and a made to order linear power supply for the more affordable devices in the Ideon catalogue. We didn’t go with the affordable, though. We went right to the motherlode; the Ideon Absolute ε DAC. This is the latest revision of Ideon’s Absolute DAC; well, not so much a revision, more taking the already highly regarded Absolute and running with it, like an absolute (pun intended) boss. Cleverly, Ideon didn’t simply throw out all that was good in the Absolute, it instead looked at what could be improved upon and spent three years enhancing it! 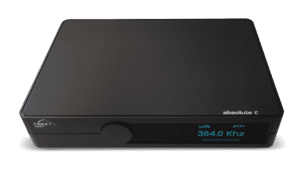 Even before its epsilonisation, Ideon’s Absolute flagship DAC was itself the product of a three-year-long research project, which resulted in selecting ESS Technology’s Sabre ES9038PRO DAC, taking advantage of the chip’s 32-bit processing and 140dB dynamic range. The ESS chip has extremely well-designed digital filters that took a whole team many man-years to develop. However, Ideon wrote more than 4,000 lines of code to fully exploit the firm foundations created by ESS and didn’t just go with ESS’s pre-configured set of commands and parameters. Ideon’s own application of the ESS chip alone would make it the Absolute ε force a to be reckoned with, but we’re just getting started!

Three is the magic number in many sections of the Absolute. It features a trio of top-of-the-line femto clocks (each with its own discrete power line) to help produce an ultra-low-noise and ultra-low-jitter signal path. Staying with the power of three, Ideon uses what it calls its ‘Triple Distillation’ input section; a proprietary three-stage noise-reducing circuit. Ideon claims that “Figuratively speaking, we have declared war on linear and non-linear distortion and noise!” Given the last time I had anything triple distilled, it was an Irish whiskey, and the unconsciousness it produced certainly reduced my noise levels. So maybe Ideon has a point.

In addition, and new to the Absolute ε, Ideon has included three zero-noise active bridges of its own design, built to eliminate the possibility of noise coming from the current rectification on the bridge. The usual way for digital designers to reduce this noise is either to go for a switching power supply, or to pretend it doesn’t happen, but compromise is not something that translates into Ideon’s core value system.