Will there come a time when everything is in one box and that isn’t a compromise? If you look at some of the bigger names in the business this looks like the way the market is moving. We, the few true connoisseurs, may appreciate the benefits of splitting a system down into constituent parts while the many who want decent sound, but frankly lack commitment to audio nirvana, would appear to prefer it if there weren’t so much hardware on show. They would also like to be able to talk to it but we try to avoid novelty in this publication, if at all possible.

Hegel’s latest amplifier looks like all the other products from this surprisingly well established Norwegian organisation. Its founder, Bent Holter, has been making audio electronics since the early nineties. They are one of a new breed of companies that designs and sources components in Europe but does its manufacturing in the far east; it’s a logical model that keeps prices sensible and ensures that they can compete with bigger brands. The plain, even Teutonic, styling means that all Hegel products look consistent and that their aesthetic doesn’t age in the way that more elaborate creations always do (just see Volkswagen versus Ford for an example). 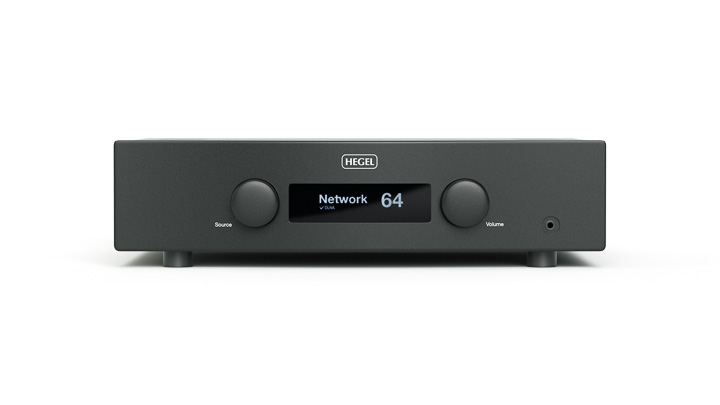 The H190 is the latest compact powerhouse amplifier with onboard DAC and network streaming capabilities. Its bluff facia is cast alloy and features only an input selector, volume control and headphone output; there is a power switch, but it’s hidden underneath. Once you notice that the button marked Eco on the handset puts the amp into standby there’s no need to touch the power switch. There is of course a display, a very clear OLED one that shows input and volume level in sensible high numbers means high volume style. Quite why manufacturers persevere with negative relative dB figures that appear to work the other way round beats me; it must be a recipe for confusion among those less obsessed.

The rear panel is clearly laid out with analogue in and outputs on the left; these include balanced inputs and both fixed and variable outputs, which seems odd when you have a high powered amp onboard, but does offer the option of bi-amping. The right hand flank provides a sextet of digital inputs that includes three Toslinks and an Ethernet connection in their ranks. That last connection is the key one here. Combine it with a third party control application such as BubbleUPnP and you have a network streamer that can pull music off of a NAS drive or audio server and send it through the DAC to the amplifier. It’s not a streamer in the full sense that a Naim or AURALiC is partly because there is no dedicated app, which means that internet radio and services like Tidal are harder to access (Hegel is working on a software fix). But if you have your own music library it will always sound better than online services. The H190 also has Apple AirPlay receiving capabilities, which gets around source limitations like net radio, albeit not as neatly as, say, Chromecast, which offers resolution up to 24/96.

The amplifier side of the H190 equation is a bit of a beast, specified to produce 150 Watts into eight Ohms and 250 into four. This Hegel also claims a very high damping factor of 4000, which should give it a strong sense of grip over the bass. The degree of benefit this accrues will depend on the loudspeaker; certain speaker designs work well with the low damping factors of single ended valve amplifiers for instance, so sadly this figure doesn’t mean that you will get more bass control in all situations.

The PMC fact.8 speakers first employed to assess the Hegel’s characteristics have fairly well damped bass but do seem to prefer a more powerful amplifier, not least because they will play at higher levels without risk of damage if the amp has everything under control. This was evident on Led Zeppelin’s ‘Immigrant Song’ [Led Zeppelin III, Atlantic] where Bonzo’s drumming is clearly phenomenal; despite the amount of compression applied to the mix, the sheer energy is still astonishing. Here also it’s easy to appreciate just how hard bass player John Paul Jones is working, his contribution gets lost with many amplifiers, but through the H190 the bass guitar sounds good and fat with good separation. On Muddy Waters’ acoustic ‘My Home is in the Delta’ (on the Folk Singer album made for the burgeoning country blues revival of the time, and recorded remarkably well by Chess) you can hear the creak of strings on frets as he moves his fingers, but what moves you is the intensity of the groove. With more contemporary recordings there is an emphasis on treble that is not always vvery sweet. It’s partly because digital treble can be a little grainy, but also because this amplifier is quite revealing of its own DAC. This is apparent on solo violin and the highs on a number of other tracks; the finger clicks on Lorde’s ‘Royals’ [Pure Heroine, Universal] are spotlit, but the power in the bass makes me want to hook up a bigger speaker. Naturally the chunky beats of electronica work a treat, with the amp’s slight edge giving the bass a punch and texture that makes it all the more essential.

I ended up installing a smaller speaker in the end (they’re much easier to move, you know) in the form of Bowers & Wilkins’ new 705 standmount. This proved to be a better match in tonal terms thanks to generous bass and well extended treble aligned to a midband that loves to play loud. These need some control in the bass and the Hegel provided it, producing sonic vistas that you could walk right into with the right recordings. Some tracks could still be a little bright. For example, Van Morrison’s ‘The Way Young Lovers Do’ [Astral Weeks, Warner Bros] is not the most sophisticated of recordings and it’s difficult to get the flow with the detail, as this amp/streamer emphasises the latter at the expense of the former. But the big sound of ‘Inspection (Check One)’ [Leftfield, Leftism, Hard Hands] takes up lots of space, expanding out beyond the speakers and shaking the furniture. The Hegel delivers very muscular bass even with a relatively compact speaker like this. However, in the context of powerful integrated amps it’s pretty relaxed through the mid; pay a bit more and you can have more definition, but not necessarily any better sense of timing. 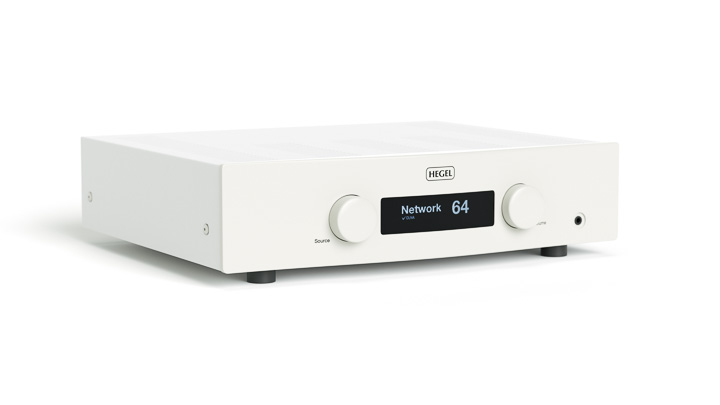 With an analogue line input it’s easy to hear the characteristics of the source; adding the Cary DMS-500 DAC/streamer also reviewed this month the result is relatively relaxed and almost lush in comparison to the Hegel’s onboard streamer. The smoothness of this source suits the grippy sound of the amplifier, but going back to the Hegel’s streamer you do feel that a veil has been lifted. The Hegel repeated this trick with a coaxial feed from a CD player, producing a well focussed and dynamic version of events that delivers the timing cues precisely on time. It’s not as resolute as a good standalone DAC, but comes pretty close under the circumstances. There’s a lot to like about the sound of the Hegel DAC when it comes to well mixed tracks like ‘Here Comes De Honey Man’ [Gershwin’s World, Herbie Hancock, Verve] where the fretless bass sounds strong and the drum has so much shape beneath gorgeous mute trumpet and piano. The Leema Antila CD player’s analogue output is a bit more subtle with better depth and smoother highs, but remember that this machine costs nearly as much as the Hegel and is a dedicated device, so it should be a bit better.

The Hegel H190 needs a loudspeaker with smooth treble and good bass extension, but the fact that it has so much control over the low end makes the range of options wider than average. The treble could be a bit sweeter, but there’s no denying the appeal of the dynamics and timing that it can deliver, and the built-in DAC and streamer make it rather good value. Three analogue inputs may not be sufficient for everyone, but with more and more digital sources, I suspect that Hegel has got the balance right on the connectivity front, Bluetooth notwithstanding. I almost forgot the remote, which is a peach, all metal with buttons that give a click and let you know what the display will be telling you; it’s the icing on a cake. Strongly recommended! 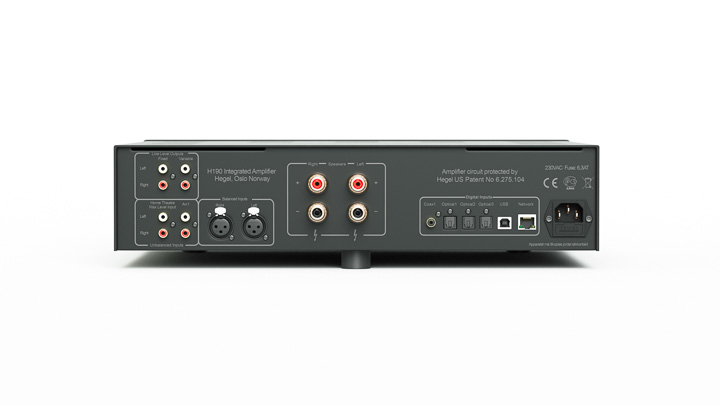 Signal to Noise Ratio: Over 100dB