It’s refreshing to come across a deeply engineered and well-made product that doesn’t arrive with swathes of sales guff to seduce prospective buyers. Exogal is that rare thing; an audio company that is more interested in the product than the spiel. This is probably not a great approach from a commercial perspective but makes a seasoned audio enthusiast all the more interested. Exogal was set up by industry veterans Larry Jacoby, Jeff Haagenstaad, and Jim Kinne. Jim was a digital audio pioneer and, with Larry, was a founder of Wadia – a former giant of the digital audio scene and one of the first companies to make a CD player that sounded musically compelling. Jim produced the Wadia 27 decoding computer (DAC) and matching 270 transport as well as the rare 790 Power DAC, and if anything he did in the past has influenced his work with Exogal it’s that digital amplifier. Exogal launched five years ago with the Comet DAC/preamplifier; a beautifully finished compact piece of electronics with a small and subtle display. At the time, the company announced the matching Ion power amplifier, but it took a further 18 months of “frying prototypes, speakers, and resistive loads” to turn it into a stable and consistent power DAC.

Having finally managed to develop the Ion, a design that had “been simmering in Jim’s head for 25 years” the company is naturally not keen to divulge it’s secrets. They will say that it’s not a Class D design and that it’s not based on PWM (pulse width modulation) as is the case with NAD’s digital amplifiers. Jeff Haagenstad explained that, “Both of them [Comet and Ion] use multi-core FPGAs to implement custom math processors that take the quantized digital data and take their best shot at recreating the original analogue waveform using complex math algorithms.” Which sounds a little like what Chord Electronics does in the DACs that Rob Watts designs, except here the technology is being used to control power output. It is also used to adjust volume; when Comet and Ion are combined, output level and digital to analogue conversion are performed in the Ion, hence the power DAC appellation. Volume is controlled with DSP in the Ion; it processes signals in the amplitude domain and calculates how much power is required to achieve the desired volume. Conversion to analogue occurs just before the output (at full power), which itself highly unconventional.

The Ion has been created specifically for use with the Comet DAC; its only input is an HDMI socket for the Exonet interface for which there are in- and outputs on the Comet. There are more Exogal components in the pipeline, including a streamer that will share this intelligent connection system. The Ion’s specified power is 100 Watts into eight Ohms with peak power quoted as 150 Watts which, given the size and unventilated nature of the case, suggests very high efficiency.

The Comet has the usual array of digital inputs plus a single pair of analogue inputs in a billet machined case with a headphone socket on one side and an almost unreadable LCD display. It does look cool though and if you get the angle right it’s possible to discern the reflective text and numbers from the matte silver background. The information is pretty basic with the chosen input at the top above the selected output, the latter offering main, Exonet, or headphones, a numerical volume indicator sits below both. A cheap remote control is supplied that can be used to change any of these but the simple app that Exogal has developed is a nicer way to do it. The latter baffled me initially because the Comet has no network connections or Wi-Fi antenna, it does however have a short Bluetooth antenna and that’s how it connects to your smartphone or tablet. Users of streaming sources will realise that this is all fine, but when you are choosing tracks with the streaming app you don’t want to have to switch to another app just to change volume. One answer is to use a second touchscreen device but the remote is probably easiest; that said, the app does make it clear when the output is muted as is the case at switch on, which can save some head scratching. Since its introduction the Comet has had one upgrade and that’s a new power supply; this is a £400 extra in a nice aluminium box (albeit with a power inlet that’s a little deep for chunky IEC plugs) and this was supplied for this review. The Ion also has an external power supply in a less sexy plastic case. 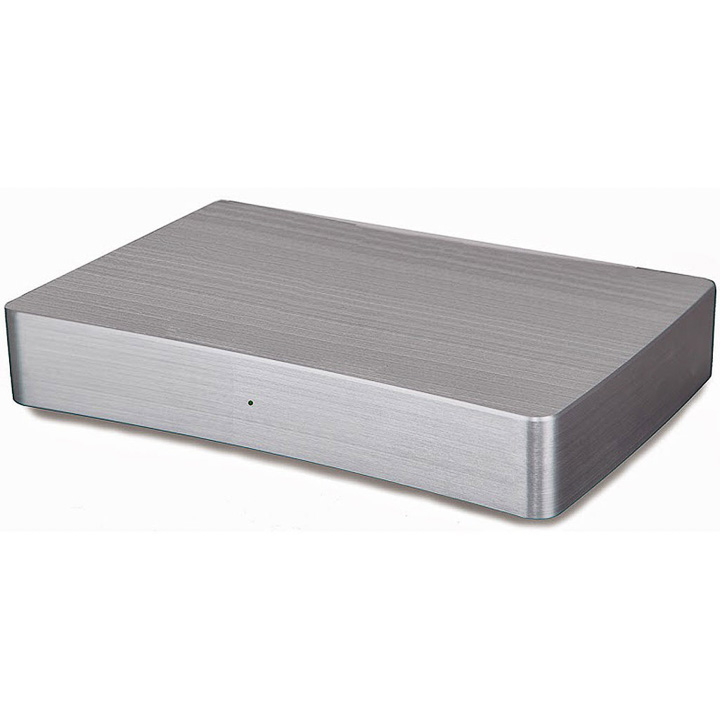 Using Comet and Ion with my preferred PMC Fact8 speakers, the balance was a little on the exposed side – very detailed and open with impressively quiet backgrounds, but slightly too bright. This works with better and warmer recordings, especially where electric guitar is involved because the Exogal pairing has tremendous immediacy, but at other times it could be a just a shade too lean, so I switched to another speaker. The Bowers & Wilkins 702 has a warmer balance and produced a stronger sense of body without conceding much – if any – of the pace that makes these electronics so engaging. Haydn String Quartets [Engegård Quartet, In D, Op. 76, No. 5 – Finale, 2L] on DSD made a good case for the composer’s choice of instrumental line-up, with tremendous vivacity and refined energy.

The more I played through this system the better it got, it’s capable of considerable fine detail and subtlety, exposing the layers in Radiohead songs like ‘Desert Island Disk’ [A Moon Shaped Pool, XL] and a very good proportion of the acoustic around Amandine Beyer’s violin [JS Bach Sonatas & Partitas BWV 1001 – 1006, Zig-Zag Territoires]. Her instrument displayed a depth and guttiness that made it sound very real. I tried two versions of an old favourite, Van Morrison’s ‘The Way Young Lovers Do’ [Astral WeeksWarner Bros]; the regular CD version seemed a bit anodyne and lacklustre, but a 24/96 remaster delivered something close to the energy and engagement of a good vinyl source. 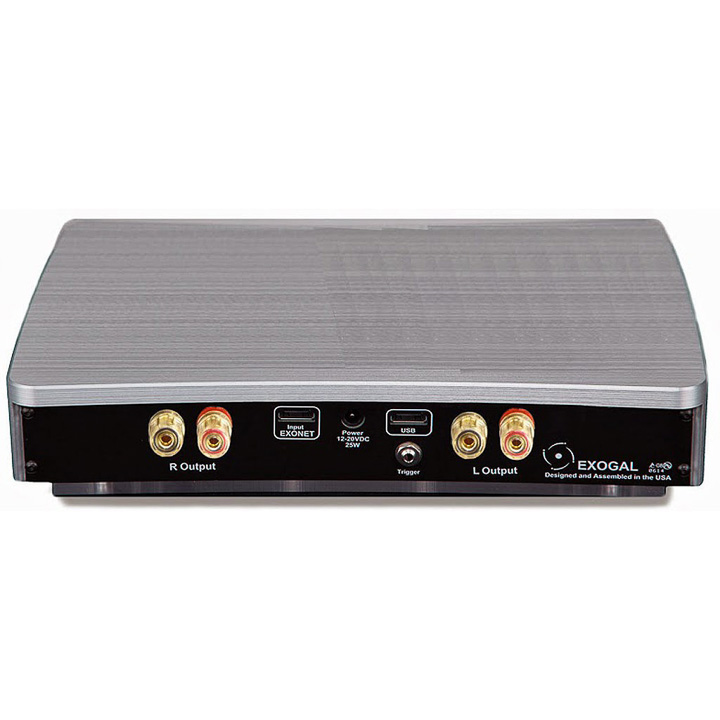 With good recordings it’s easy to play the Exogal system at higher levels than usual. Distortion of the conventional variety is clearly very low because this system has considerable ease when the wick is turned up. I used the Comet in a more conventional arrangement with its analogue outputs connected to an ATC P2 power amplifier; this produced meatier bass alongside a harder edged, less relaxed overall sound that made a very good case for the digital amp. On a Macy Gray track [‘Annabelle’, Stripped, Chesky], the electric guitar sounded more realistic thanks to the extra attack produced by the Class AB amp, but there was less low level resolution. The Ion is a little brighter and produces better depth of image thanks to the quieter background, but perhaps more surprisingly it also delivers better timing.

Out of interest I also tried the Q Acoustic Concept 500 loudspeakers with the Exogal components and these also worked well; the sense of ease was particularly pleasant and the weighty bass on offer from this speaker worked a treat with double bass and drums, not to mention bringing out the acoustic around vocals. The Ion clearly has no difficulty when it comes to driving this sort of load so I pushed the boat out and lugged in some Bowers & Wilkins 802s, a speaker that is fairly efficient but not the easiest of loads. Would such a tiny amplifier be able to control such beasts? In short, the answer is a resounding ‘yes’! Once again the Exogal’s fabulous immediacy came to the fore, giving everything a spacious crispness, but this time with a visceral presence thanks to the bass extension on tap with the 802. It’s fast and tight bass rather than the room-shaking variety, which in my book means that it’s clean and controlled. This quality of control was shown very effectively with Deadmau5’s ‘Seeya’ [while(1<2), Astralwerks], a track with deep, powerful lows that can easily get uncomfortable in the room. It may be that the Ion’s bass is on the dry side but there was no escaping the phenomenally clean and open power. A far older track in Zappa’s ‘Penguin in Bondage’ [Roxy and Elsewhere, DiscReet] proved that age is no limitation to vitality of performance, nor audience atmosphere, as is made very clear on the spoken intro.

The Exogal Comet and Ion are a fascinating pairing that offer remarkable immediacy, spaciousness, and detail for the asking price. You will be hard pressed to find a pre/DAC/power amp combo that will beat these two across the board, and if your music is in a digital format, it will be an even longer search. 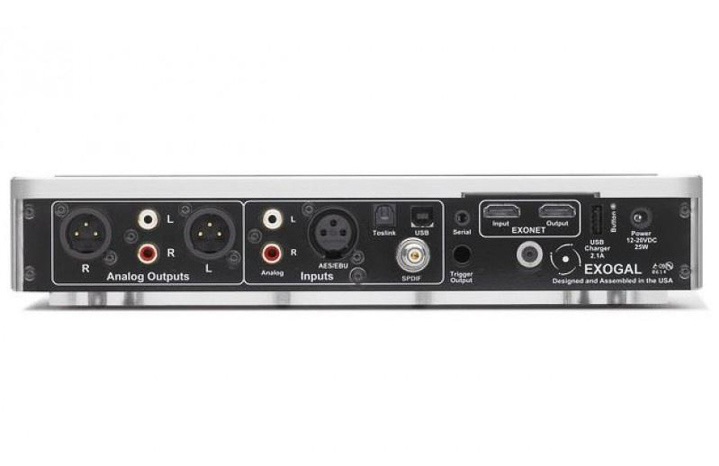 Digital Inputs: One AES/EBU (via XLR), Coaxial (via BNC jack), one Toslink, and one USB-B