Just as you’re unlikely to mistake a Vivienne Westwood design for anyone else’s work, it seems doubtful you’d ever confuse a Cyrus product with any other brand’s output. Even if it didn’t realise it at the time, the company has been all over the ‘lifestyle’ market since the off, thanks to the distinctive half-width chassis into which it’s squeezed pretty much every product that isn’t a loudspeaker since 1984’s ‘One’ amplifier.

At a glance you wouldn’t know it, but with its new ‘XR’ range of electronics Cyrus has pretty much started from scratch. Yes, it looks only and always like a Cyrus product – but the i9-XR features plenty of fresh engineering as well as some ergonomic upgrades, all intended to bring Cyrus into line with some (arguably) higher-profile rivals.

The real headline (as far as real-world consumers are concerned, at least) is the appearance of five digital inputs (two S/PDIF via RCA, two optical via Toslink, and one USB input, all leading to the second generation of Cyrus’ QXR DAC) alongside four line-level analogue inputs and a moving-magnet phono input. The USB-B is capable of handling digital audio files up to 32bit/384kHz and DSD up to 512, while the other four digital inputs are useful up to 24bit/192kHz. So high-resolution digital audio is just as firmly on the menu as is the analogue equivalent. 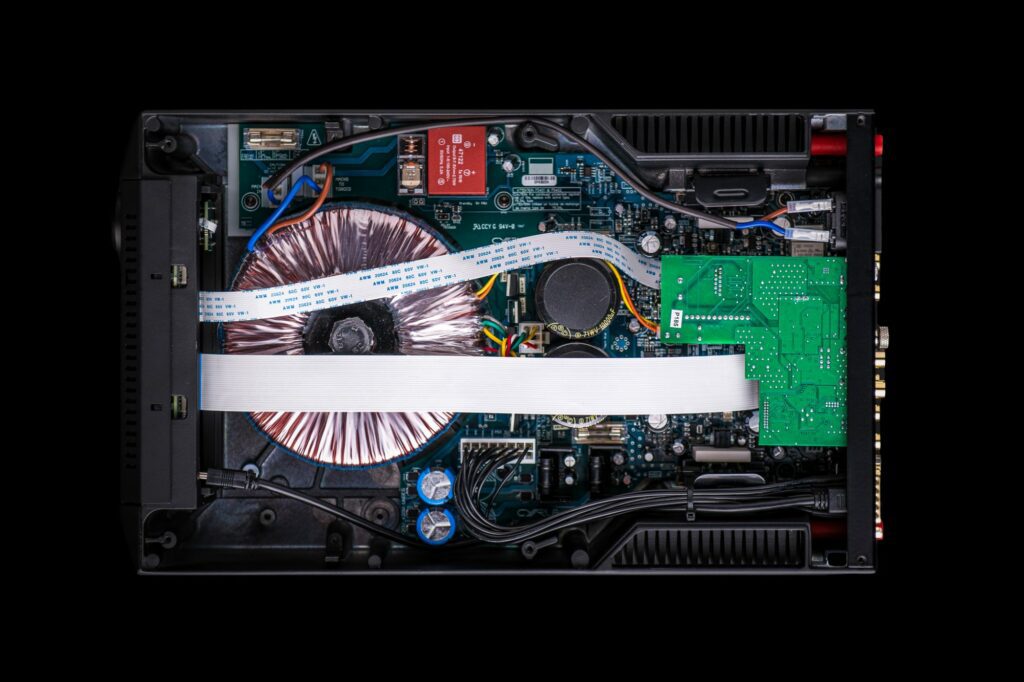 As well as these nine inputs, the (unsurprisingly crowded) rear panel also hosts connections for two pairs of speakers, two pairs of RCA stereo outputs (one in case you wish to deploy a power amp, the other for use with a recording device) and for Cyrus’ eminently capable PSU-XR power supply. Then there’s MC-Bus in/out connections, in case you’d like to daisy-chain your Cyrus equipment together so that it all functions via one remote control (the i9-XR is supplied with the iR14 full-system remote control that’s this close to being coherent – a big step on for the brand) and, of course, a socket for mains power. And in a move that’s almost the exact opposite of ergonomic good sense, the rear panel is also where you find a 3.5mm headphone output.

I’m speculating here, but if you run cables to all nine inputs, both pairs of speaker terminals, a PSU-XR power supply, a recording device and a pair of headphones, you’ll probably need to weigh the front of your i9-XR down to keep it flat on the shelf.

At the front of the little box, meanwhile, there’s a monochrome display that’s strongly dependent on being viewed on-axis. In conjunction with a positive-feeling twist-and-push control dial, where you select volume level and so on. It also allows access to seven different digital filter alignments that can alter the way the digital inputs sound. There are a smattering of physical controls here, too – ‘power on/off’, ‘input selection’ and what-have-you. They’re both touch-sensitive and responsive – neither of which could be said about the physical controls on previous Cyrus amplifiers.

On the inside, things have similarly advanced. There’s a new high-speed analogue buffer at the DAC input stage. The analogue pre-amp is a short-path design featuring relay input selection and an overspecified gain stage derived from the new Pre-XR preamplifier. The power amplification section (which generates either 89 or 91 watts of power per channel, depending on which bit of the Cyrus literature you read) is responsive beyond 100kHz – ample dynamic headroom and basically flat frequency response are the aims here.

All of which looks impressive – laudable, even – when written down. But get some music playing (the i9-XR is attached to an Apple MacBook Air via its USB-B input, a Cyrus CDt-XR using an Atlas Voyager digital coaxial cable and a Clearaudio Concept turntable using a pair of QED Reference Audio Evolution analogue interconnects, and then to a pair of Acoustic Energy AE1 Reference Series mkIII loudspeakers on Atacama Moseco 6 stands using QED XT-400 speaker cable) and it quickly becomes apparent that not everything has changed in Cyrus-land.

With a CD-borne copy of Pharoah Sanders’ Thembi [Impulse!] delivered to the i9-XR digitally, the resulting sound is not simply Cyrus-like; it’s unmistakably Cyrus-y. Anyone with a passing acquaintance with the brand at any point in its history will be primed to expect a lean, detailed sound – and the alacrity with which the i9-XR serves up the recording is definitive in its Cyrus-ness. It’s the antithesis of ‘meaty’ sounding but that doesn’t mean the i9-XR is in any way short of punch or low-end presence. It’s just that it draws such straight edges at the attack and decay of individual bass notes, allowing absolutely no overhang, that its speed and momentum might initially be confused with a lack of substance. Dialling through the available filter options delivers some very mild changes in emphasis (‘steep/linear’, gentle/linear’ and ‘brick wall’ are probably the most overt in their influence on the sound you hear), but I doubt the digital filter has been invented that can make a Cyrus amplifier sound anything but the audio equivalent of a well-trained greyhound.

Switching to a vinyl copy of PJ Harvey’s To Bring You My Love [Island] only makes the point more forcefully. If it’s rapidity you want, along with great big fistfuls of detail and the sort of deep-breathing dynamic ability that can make the harmonic variations in an analogue keyboard just as apparent as the switch from ‘whisper’ to ‘scream’, the i9-XR could be just the ticket. Its ability to pick apart a recording in order to make every individual strand available for inspection, without in any way affecting its unity or sense of performance, is rare at any price.

Throughout the frequency range, nothing is overstated and nothing is under-represented. Tonality is equally well-judged – the line between ‘crisp’ and ‘hard’ where treble sounds are concerned can often be wafer-thin, but the i9-XR treads it confidently. And in the midrange, Polly Jean’s voice is eloquent, characterful and explicit in its motivations – so when she piles on the malevolence (as she is never far from doing on this album) it can provoke an involuntary physical response.

A FLAC file of serpentwithfeet’s Bless Ur Heart [Secretly Canadian] proves further vindication of the decision to fit as capable and accessible a DAC as possible to the Cyrus. The alacrity and manoeuvrability demonstrated by the i9-XR’s other inputs is present and correct via the USB-B, and the level of straightforward immediacy given to the vocal is little short of thrilling. Those low piano notes and the dry kick-drum might seem to lack a little on first acquaintance, but never fear – it’s just the Cyrus doing its ‘float like a butterfly, sting like a bee’ thing. 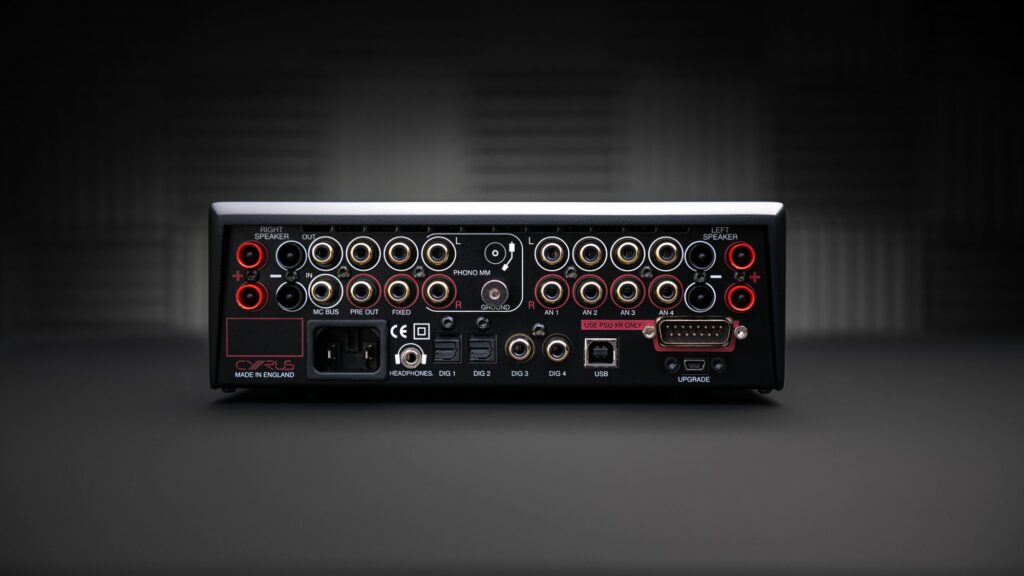 At its heart, then, the i9-XR is just like every other Cyrus integrated amp since day one’s One. Which is not meant as any kind of criticism or put-down, you understand – at this sort of money, the i9-XR is spectacularly short of alternatives that can rival its level of insight, its well-controlled perkiness or its out-and-out fidelity. The addition of all those digital inputs is a fine and sensible idea, and the quality of its phono stage is not up for question.

Admittedly, being ‘better than previous Cyrus amps’ where ergonomics are concerned is definitively not the same as ‘having good ergonomics’ – but I guess we should applaud Cyrus for making some progress on that score. And anyway, the last thing anyone wants is Cyrus turning into a ‘me too!’ brand of convenience and simplicity. Far better it sticks to what it’s known for, both aurally and visually – because the up-sides outweigh the downs to a significant degree.