On the weekend before Easter, Hi-Fi+ Associate Publisher Pete Collingwood-Trewin and I took the opportunity to visit CanJam SoCal, which was held at the JW Marriott hotel in the middle of downtown Los Angeles.


The event was popular with manufacturers and with show-goers, it seemed, so that at times there were lines of enthusiasts queuing to hear the enticing products on demonstration.

What follows is the third of what will ultimately be a four-part report on the event.

IMPORTANT: As always, we apologize to any manufacturers we were not able to visit. No slights of any kind are intended. Then again, please note that on more than a few occasions we visited manufacturers only to be turned back by the crowds of people surrounding their demonstration tables (which is, as the old saying goes, a ‘high quality problem to have’). 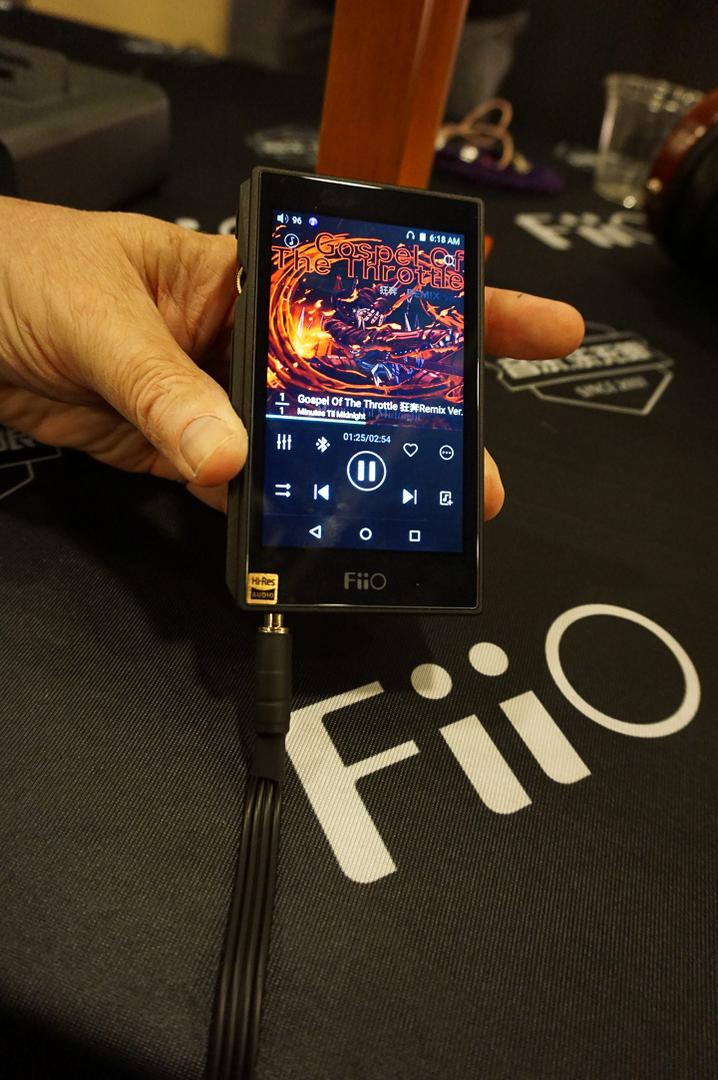 FiiO’s primary emphasis at SoCal CanJam centred upon its X5 3rd-generation Android-based digital audio player ($399), which features dual AKM AK4490 DAC, uses a Rockchip quad-core RK3188 processor, provides 32 GB of internal storage, capacity for up to 512GB of external storage, offers Bluetooth 4.0 and Wi-Fi support, and provides both single-ended and balanced headphone outputs. The name of the game for FiiO, then, is to offer huge functionality at much less than the going rates expected for such an advanced technology device: mission accomplished. 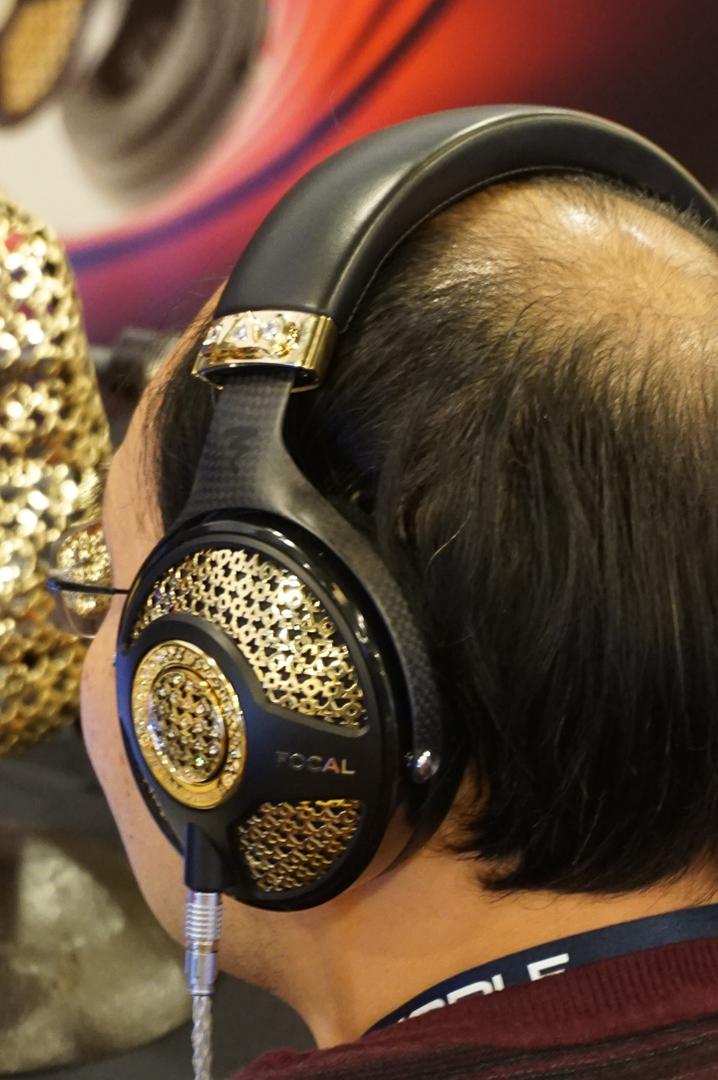 Focal did not have a genuinely new headphone model to show for CanJam, but what they did have is arguably the most ostentatious, most blinged-out, and most over-the-top headphone ever in the form of the Utopia Tournaire headphones, which will sell for the eye-watering sum of $120,000/set. What’s more, no self-respecting Tournaire owner would want to go without the matching Tournaire headphone stand, which is offered for a mere $12,000. What’s behind these sky-high prices? Well the Utopia Tournaire is basically a standard Utopia headphone done up with gold (not ‘golden’, but actual gold) trim pieces inset with diamonds (lots of diamonds). The stand, in turn, resembles a mask that might be worn at a formal costume ball and is also treated to gold-plated outer surfaces. 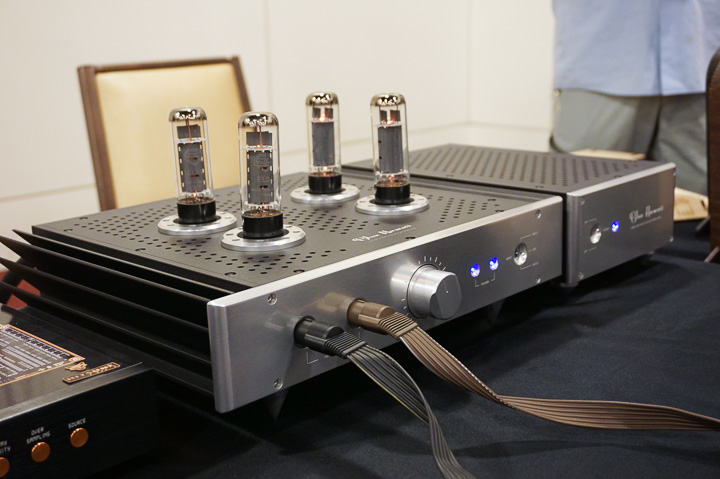 Head Amp did not have any truly new headphone amplifiers on display, but it was showing its famous Blue Hawaii SE electrostatic headphone amp ($5,800 – $6,800 depending on configuration) in conjunction with a set of world-class Stax SR-009 electrostatic headphones. For Hi-Fi+ Associate Publisher Pete Collingwood-Trewin, this represented a first opportunity to hear the Stax flagship headphones at their best and it would be no exaggeration to say that, for Mr Trewin, this quickly proved to be a case of ‘love at first listen’. 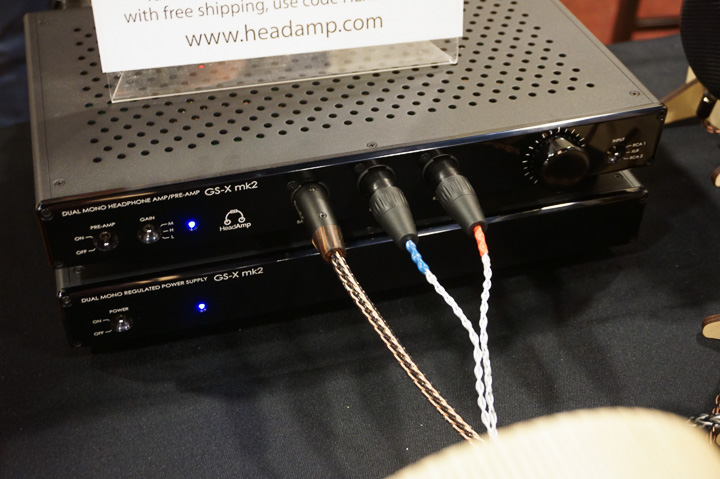 Also on demonstration was Head Amp’s GS-X MkII two-chassis headphone amplifier for conventional—that is, non-electrostatic—headphones, which sells for $2,999. The only thing that consistently throws me off about this latter model is that its nomenclature makes me think it must surely be a blisteringly fast sportbike from Suzuki (whose go-fast motorbikes are commonly and collectively known as “Gixxers”). 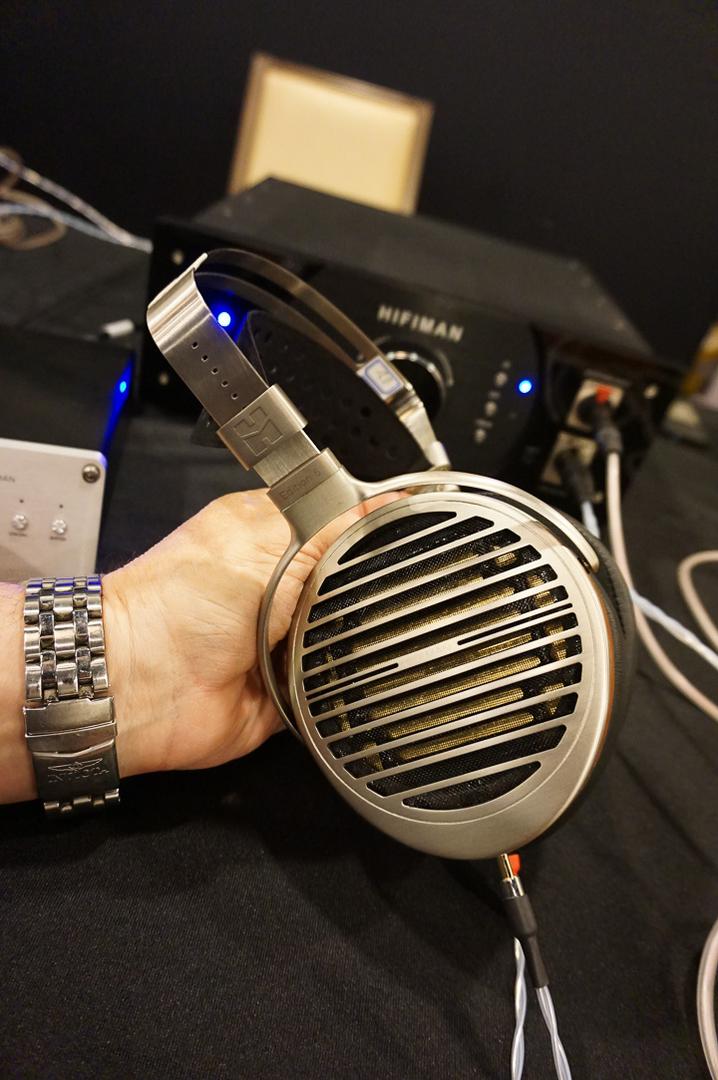 For CanJam SoCal HiFiMAN renamed its upcoming flagship planar magnetic headphone as the Susvara (previous exhibited as the Edition 6). The price: ~$6000. For HiFiMAN, the Susvara is the last stop on the performance ladder before reaching for the stars with the mighty Shangri-La electrostatic headphone system.

Holo Audio USA and Kitsune HiFi are headed by Tim Connor and the firms operate as two separate but complementary entities together responsible for bringing us the both standard and upgraded Holo Audio components, the most notable of which is the Holo Audio Spring DAC. 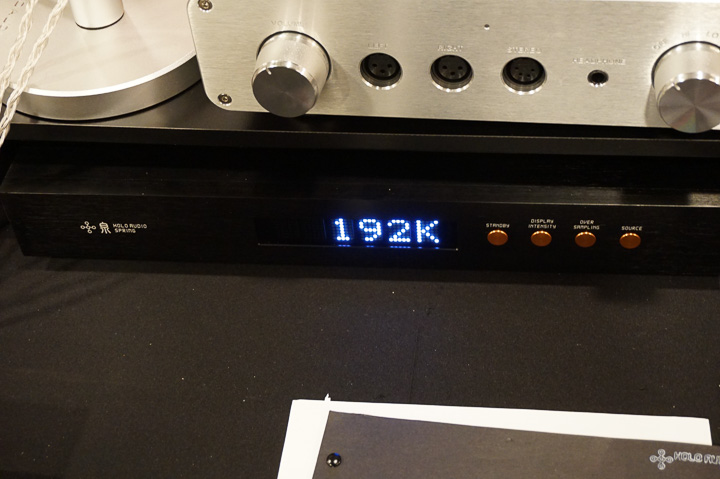 To be clear Holo Audio USA imports Holo Audio products to North America, and distributes them there, while Kitsune HiFi provides specialised tweaks and upgrades for those products, if desired.

Then, at the top of the line, we have the full-on Holo Audio Spring DAC Level 3 “Kitsune Tuned Edition” ($2,499), which provides both upgraded Jensen PSU capacitors and special “Green Label” 99.99% pure Silver O-type transformers.

Quite frankly, the Spring DAC “Kitsune Tuned Edition” strikes us as being an awful lot of DAC for the money—and one that provides the sorts of advanced R2R technologies typically only found in far more expensive digital audio components.


In past show reports we’ve talked a bit about JDS Labs’ lovely Element amp/DAC ($349), but now that unit’s industrial design has given rise to an equally beautiful line of separates comprising the Element EL Amp ($279) and the matching Element EL DAC ($249), both of which offer ridiculously superb performance specifications for the money (or even not just or the money). 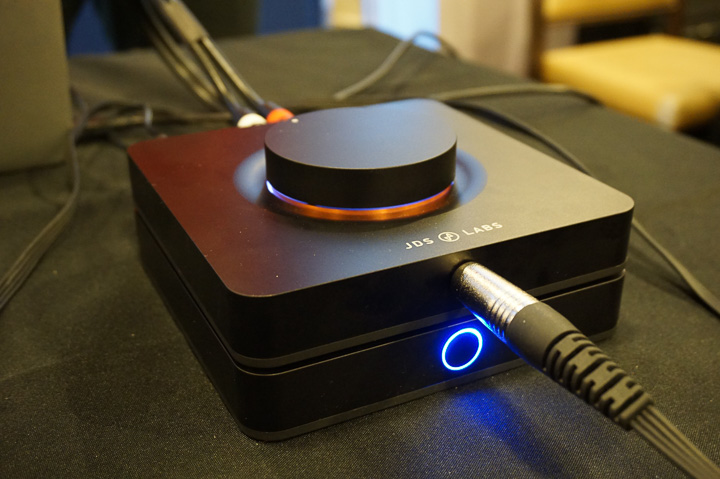 When it comes to ultra-high performance in-ear headphones and CIEMs, Jerry Harvey Audio may well and truly have invented the proverbial ‘better built mousetrap’ in the form of its unspeakably cool new Siren-series Lola model ($1,599 in universal-fit earphone form, or $1,745 and up in CIEM guise). In a sharp departure from previous Jerry Harvey designs, the Lola features a hybrid driver array consisting of a quartet of balanced armature-type high-frequency tweeter drivers, a pair of balanced armature-type bass drivers, and in the middle something truly new—namely, a pair of small dynamic driver built into a miniature, horizontally opposed, vibration-cancelling midrange enclosure. JHA calls this new driver enclosure DOME (which stands for Dual Opposed Midrange Enclosure) and judging by the Lola’s sound DOME really works. 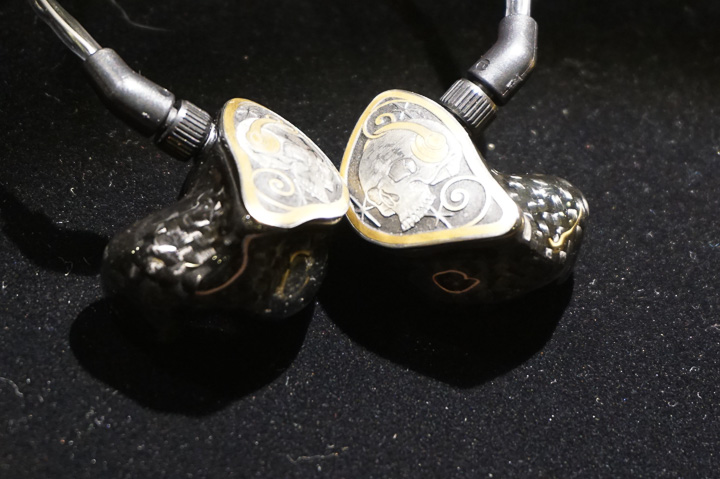 In a brief listening session, I was floored by how open, transparent, free breathing, and above all coherent the Lola sounded. Based purely on first impressions, I would say the Lola might well be one of the greatest (if not the greatest) in-ear transducers on the market today. JHA President Andrew Regan said he felt the Lola represented company founder Jerry Harvey’s finest work to date and I would certainly agree with that assessment. 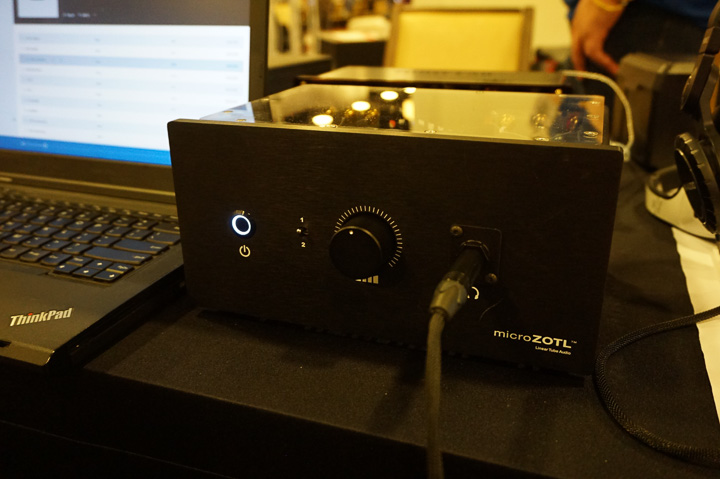 Linear Tube Audio showed its David Berning-developed Micro ZOTL 2 valve-powered, output transformer-less headphone amplifier/preamp ($1,895), which seem to have been winning new friends (not to mention critical acclaim) every time it has been on demonstration. 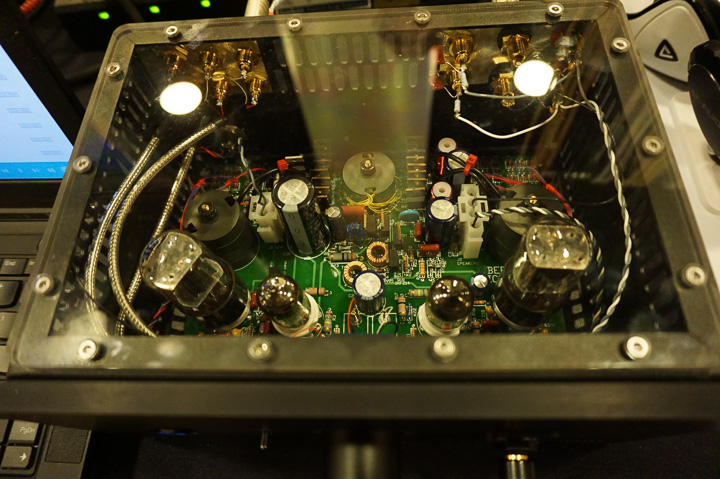 Headed by veteran studio technician Jonathan Little, Little Labs offers a range of useful Pro Audio devices, the most important of which, for headphonistas, is the firm’s excellent Monotor headphone amplifier ($600). The company bills the Monotor as “the only audiophile headphone amp designed for pro audio work.” 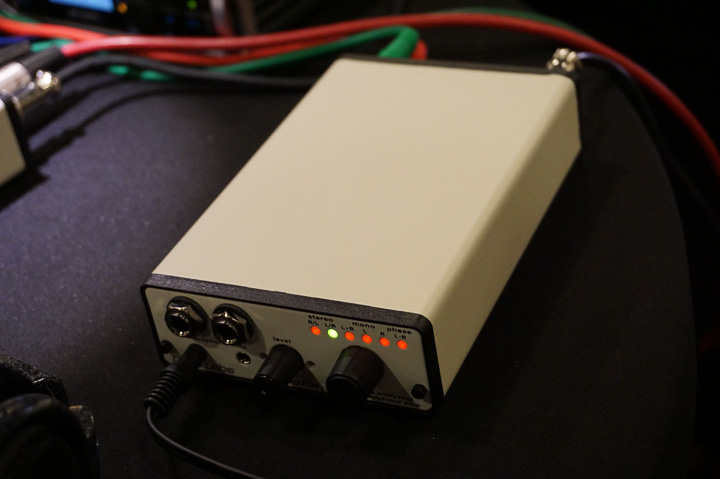 The Monotor provides dual sets of independently amplified 6.35mm and 3.5mm headphone output jacks, while supporting a range of stereo (R/L, L/R) and mono (L+R, L, R) output options.  The unit sports an outboard power supply and offers combo balanced XLR/TRS inputs. In a too brief listening session, I was struck by the Monotor’s fast, clean, and almost hyper-neutral sound. It would be interesting to compare the Little Labs Monotor vs. the also Pro Audio-orientated Rupert Neve RNHP headphone amp (I can already see the tagline: “Studio Veterans Battle It Our for Headphone Amp Supremacy”). 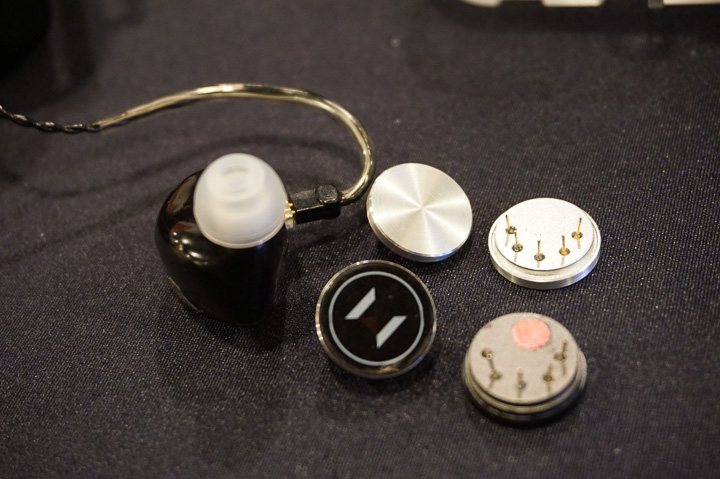 Modular Ears showed prototypes of two earphone product concepts: the ME2 ($299) and the ME4 (price TBA). Both models, however, leverage the same big idea, which is to build earphones that offer rear mounted, plug-in style voicing control modules (or ‘personality modules’, if you will) that allow considerable variation in the overall sonic character of the earphones. Unfortunately, by the time I made it to the Modular Ears table, the ME4 prototype had got damaged, but what I heard from the still-working ME2 prototype was more than enough to pique my curiosity.

Motif and Surf are sibling cable brands, but ones designed to cater to different parts of the headphone market.

Surf cables are all about providing high performance at sensible prices and to this end use silver-plated copper conductors with Teflon dielectrics. Typical Surf headphone cables would sell for between $90 and $110 for 4-foot or 5-foot models, respectively, with the same prices applying whether the cables are terminated for full-size headphones or for IEMs. 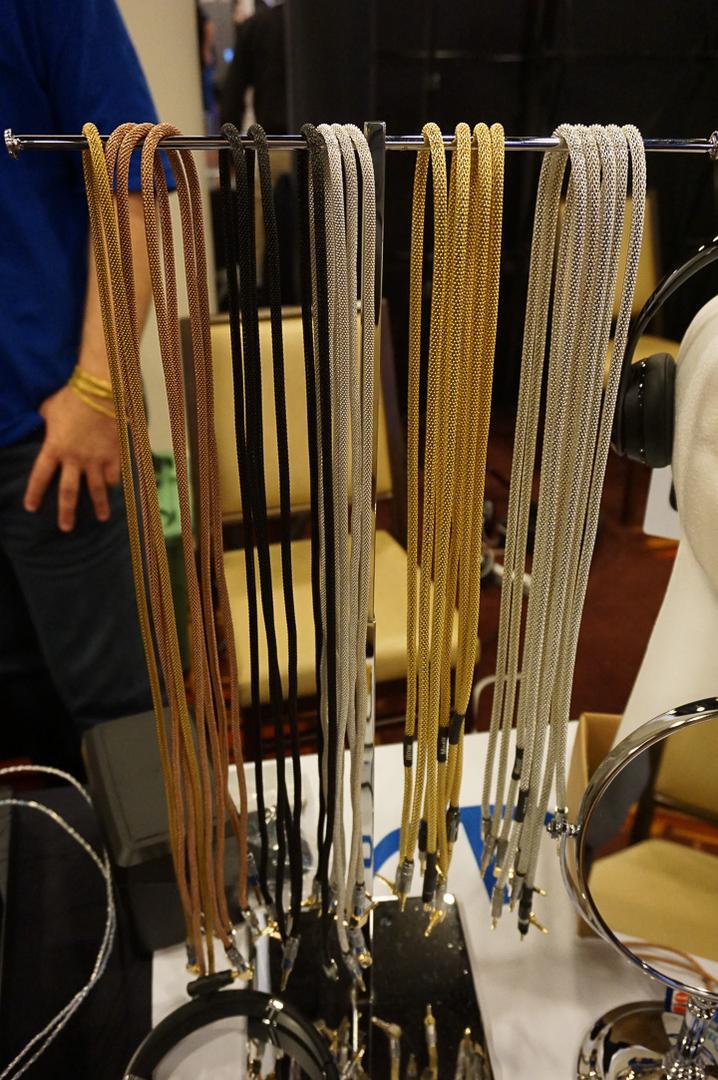 Motif cables also aim to provide meaningful upgrades from stock headphone/earphone cables, but with a particular emphasis on doing so while looking good if not looking outright posh. With this brief in mind Motif cables feature jackets whose outer surfaces use what looks like the sort of braided metal (or ceramic-coated metal) mesh used in fashion bracelets and necklaces from jewellers such as Charriol. Accordingly, Motif cables are offered in silver or black finishes ($59) or in gold or rose gold finishes ($69) and are billed as “the only headphone cable you can wear as jewelry.”

For CanJam SoCal the San Diego, CA-based firm MrSpeakers was showing its new mid-priced ÆON planar magnetic headphone ($799), which is now fully released to production and which will be reviewed in the next issue of Hi-Fi+. 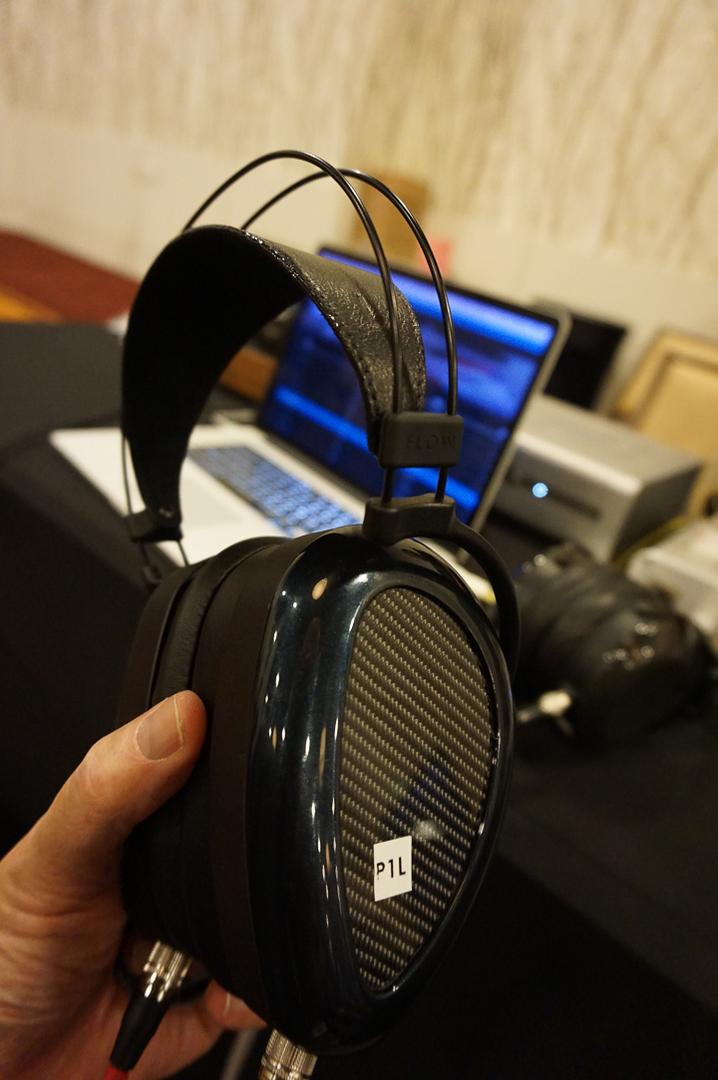 About the only thing that’s changed in the ÆON since it was first shown at the CanJam NYC event earlier this year is that the materials and manufacturing techniques used for the ear cup-mounted driver frames has changed, resulting in a weight loss of several ounces, making an already delightful headphone even more comfortable to wear for longer listening sessions.

A Tale of Two Cities