A Tale of Two Cities

We’ve been holding out on one of the two recent launches, in part because our counterparts over at The Absolute Sound covered the Sonus faber launch so well. But the recent launch of the new Homage Tradition range from the Italian brand, and more recently the launch of the Moon 888 amplifiers, highlights a recent and important change in the way audio products are presented and marketed, and it’s good for everyone!

These were two high-profile launches, one of a high-end trio of loudspeakers, the second a pair of no quarter given £125,000 power amplifiers. Both were placed in prime location spaces; the first in swanky Central London dealer KJ West One, the second in a private room in Edinburgh’s Scotch Malt Whisky Society, which was then followed by public session in the Loud & Clear Edinburgh store. Both placed an emphasis on a public/private launch, with members of the press given an exclusive preview in advance of the invited public visit. In part, this reflects a change in the dynamic of the audio media itself, and in high-profile launches this now includes mainstream newspapers and appropriate tech bloggers. But the days of a dozen audio journalists from half a dozen countries rocking up at the opening of a crate seem to be over – that’s what shows like Munich are for.

A quick look at the products themselves. The three strong Sonus Faber Homage Tradition loudspeaker range replaces the popular Amati 3.5 way floorstander and two-way Guarneri standmount with similarly named (but very different) models. These are joined by the all-new smaller 3.5 way Serafino, with a Vox centre channel expected later in the year. Serafino follows the other models in the Homage series, in that it’s named after an Italian master violin-maker, this time Santo Serafino. As ever with modern Sonus designs, the lute-shaped design is richly finished in metal, leather, and wood, with a new dark wenge finish joining the ever-popular red walnut. The overall look is reminiscent of classic Riva Ariston launch (in the process, the trio are an unofficial land-lubber’s tribute to yacht designer Carlo Riva himself, who died last month at the age of 95). The loudspeakers feature a number of innovations from previous models, too, including a ‘Stealth Ultraflex’ wave-shaped ducted rear port, clever decoupling, low resonance ‘Silent Spike’ mounting system, and a carbon-fibre stand for the Guarneri. In listening at KJ West One’s base, the Amati and Guarneri were both extremely impressive in terms of producing a sound that retains much of the lush and lovely sound of classic Sonus faber models (including the Guarneri Homage and Amati Futura these new models replace), but with a sense of pace and increased dynamic headroom that makes them appeal to the most modern of audiophiles. Priced at £13,600 per pair for the Guarneri, £18,000 for the Serafino, and £23,500 for the Amati Homage Tradition.

A speaker costing close to £25,000 is one thing. A pair of £125,000 mono power amps is quite another. Moon’s new 888 – first seen at CES in January – is a departure for the brand, more commonly associated with high-performance audio from the attainable to the ‘spendy’. Prior to the 888, the company’s most outré design was the 880M mono amps, and you can buy almost four pairs of 880M for the price of a pair of 888. Designed as a statement of intent at Moon, the 888W per channel monoblocks are designed with an output capacity of 8kW, can run balanced or single-ended, feature 350,000µF of reservoir capacitance, have some of the most innovative and effective heatsinks in audio, and include very clever rhodium-plated speaker cable terminals that lock down on spade lugs more effectively than any kind of termination we’ve seen to date. The result is an amplifier that can effectively drive any loudspeaker effortlessly, with the kind of chassis that dissipates heat and vibration as efficiently as a race-car. Played through a full Moon system into a pair of YG Sonja 1.3 using custom Studio Connections cables and Quadraspire racks made specifically for the huge 888s, this system played with grace and effortless power long into the night, both before, during, and after the consumption of quite a lot of cask-strength whisky.

So, why does everyone benefit from these kind of events? Frankly, like many in the business, I’ve grown somewhat uncomfortable at the idea of a closed launch to the press. Trade-only events like CES work for some devices, but if manufacturers take the time, trouble, energy, and expense to set-up and install a system, it’s only fair that the demonstration is made to the greatest number of people. OK, so presenting the speakers to a mix of press and actual human beings is probably not a good idea, because (disregarding the musty smell and mild case of rabies inherent to all audio critics) the press will monopolise the event, asking questions and demanding interviews and photo calls. Having sat in on a couple of truly mixed press conferences, there’s a sense of frustration that sets in on the public’s part because of the rounds of questions getting in the way of the audition.

However, the scheme works, if you allocate two sessions for the same event; one for the press, one for the public. And in both launches, this happened, and happened successfully. A select pack of journalists in one session (I’m not convinced ‘pack’ is the correct collective noun for journalists: maybe ‘a bullshit of journalists’ is more accurate) invited and interested music lovers for the next. Of course, this only works if there are a relatively small number of new products launched at the event. If there is a whole range, this is probably best served by a press conference, or a show proper. 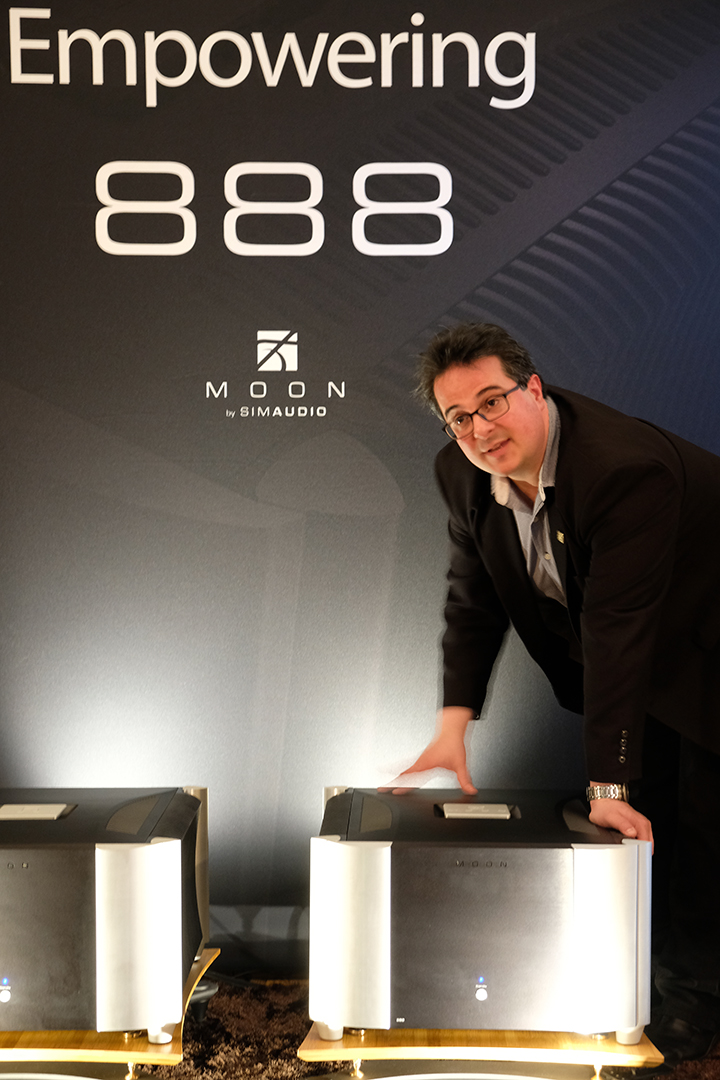 More importantly, these kinds of launches both demonstrate positive signs for the audio world. First, these events are professionally produced, in spaces where you might want to visit without fear of catching scabies from the chairs, or rabies from the demonstrator. If we are making products that cost as much as a Mercedes Benz, they should be presented in an environment and by people professional enough to exist in that market. Yes, it’s all about the sound, but if the guy trying to convince you about that sound is wearing last week’s breakfast, and the room has that ‘best before 1973’ look and smell, potential music lovers will go elsewhere (and that doesn’t mean ‘another audio dealer’, it means they will spend it on a better Mercedes, or a holiday, or a nice watch, and so on). Some companies are learning this, making products that deliver the sonic and the visual goods, and many of these companies are also placing their products in suitable environments.

The other good sign is recognition beyond the audio world, and a lot of that falls to the vinyl revival. Listening to music on LP is now so much of a ‘thing’ that it’s used in advertising all kinds of products, and the halo effect of that is benefitting all manner of audio communities. So, we see hi-fi reappearing in the luxury and lifestyle media, and even in the newspapers. Sure, a big part of that relies on headline-grabbing prices (I don’t think the feature about the 888 amps would have appeared in The Scotsman newspaper –  http://www.scotsman.com/business/companies/retail/edinburgh-hi-fi-specialist-makes-big-noise-with-moon-1-4429580 – were it not for that six-figure ticket) but almost any publicity is good publicity after so long in the wilderness.

I hope this is just the start of a more intelligent way of bringing the products we all get excited about to a new audience. Local events like this will never (and should never) replace big events like Munich High-End, but they do supplement the excitement of such shows, and bring that excitement to a more local level, without the dusty store owner and his out-of-date approach to music and audio. I can say this without it being too much of a cliché thanks to Moon using the term, but such events are more an evolution than a revolution, but they are also causing a bit of a revolution, too. Long may it continue.