This is the last of four illustrated descriptions of the new and exciting products seen at CanJam NYC 2018. 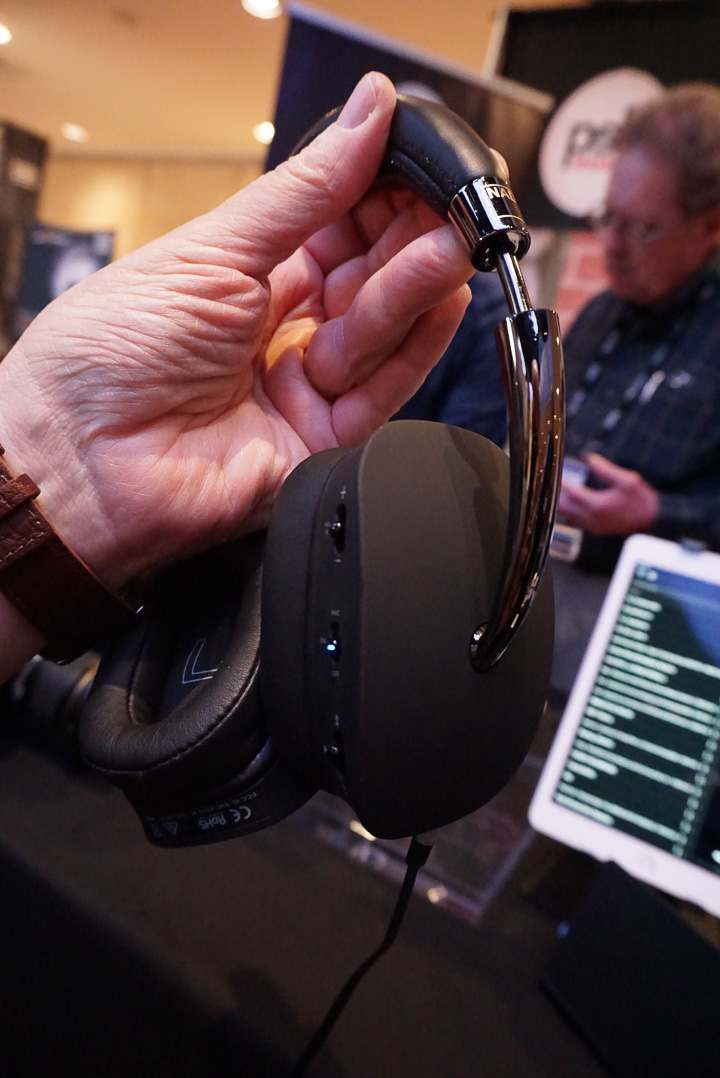 NAD is the sister brand to PSB, so with the advent of a new PSB flagship headphone—namely the M4U8 model described below—it was inevitable that there would also be a new NAD sibling model: the HP70 ($399). It’s tempting to think that NAD’s HP70 is essentially a PSB M4U8 in different livery, but that isn’t strictly the case. According to designer Paul Barton, the NAD model offers very slightly different voicing to the M4U8, with the PSB headphone offering dead neutral voicing and the NAD offering an extremely subtle hint of added top-end ‘sparkle’. One other difference is that the HP70 and M4U8 use different automatic noise cancellation devices and schema, though both are quite effective. 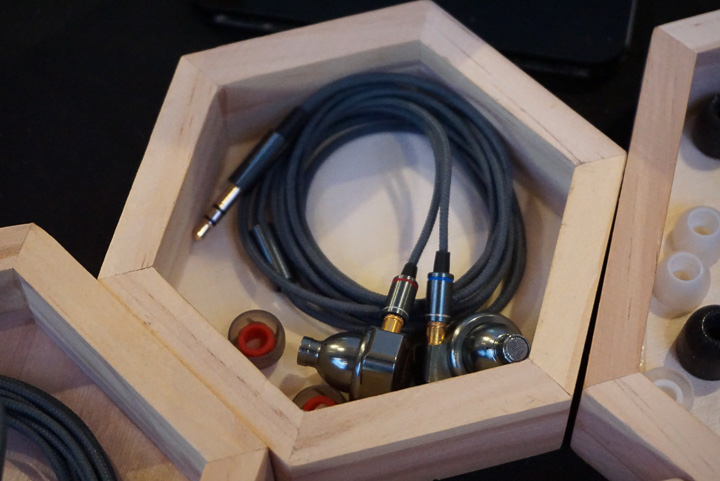 The Taiwanese headphone and earphone specialist oBravo introduced a slew of new models at CanJam NYC. Among these were four variants on the firm’s exotic hybrid eamt-O (“Ra”) earphones: models included the Ra A ($6,400), the Ra W ($6,600), the Ra C ($6,800), and the Ra Cu ($10,000). There will also be a Ra Ti model. The Ra models share certain design features in common, including an exceedingly tiny 8mm Heil AMT-type driver (the smallest Heil driver we have ever seen) used in concert with a 16mm dynamic driver. Impedance ratings for the Ra models are 182 Ohms while sensitivity is specified at 105dB. Differences between the Ra models involve materials used in the earpiece housings themselves, with the more difficult-to-machine materials commanding higher prices. 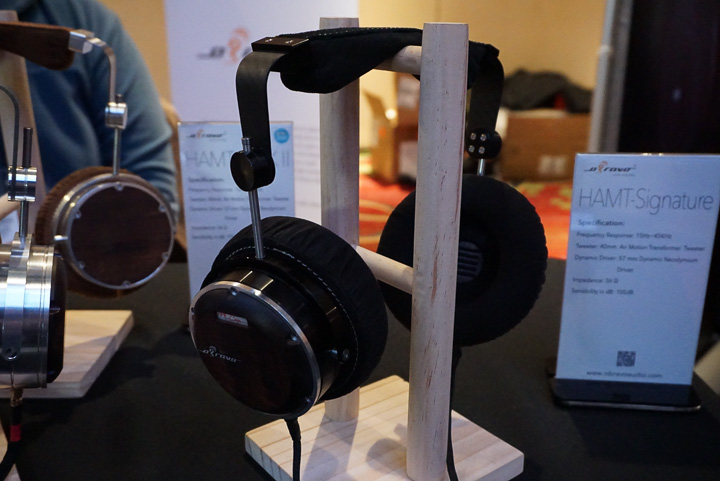 Alongside these exotic and costly earphones, oBravo also announced new versions of its original HAMT-series headphones, starting with an updated HAMT-1 Mk II headphone ($1,900) and the even higher performance HAMT-Plus ($3,900). At the to of the range is a new HAMT Signature model (56 Ohms, 105dB sensitivity, 40mm Heil AMT-type driver, 57mm dynamic driver, $6000). 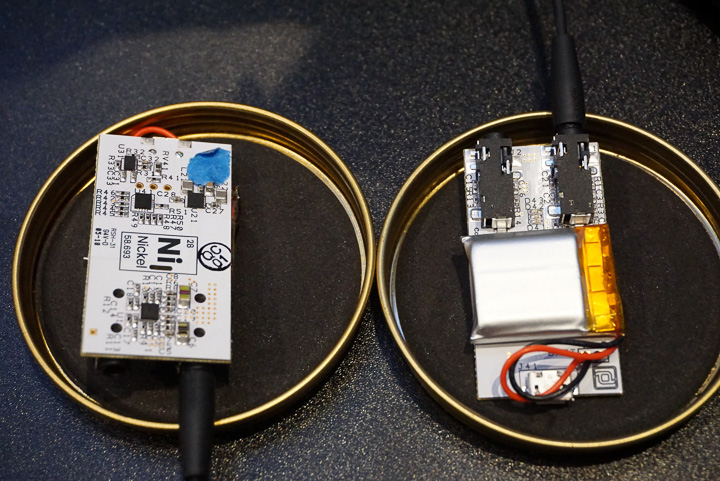 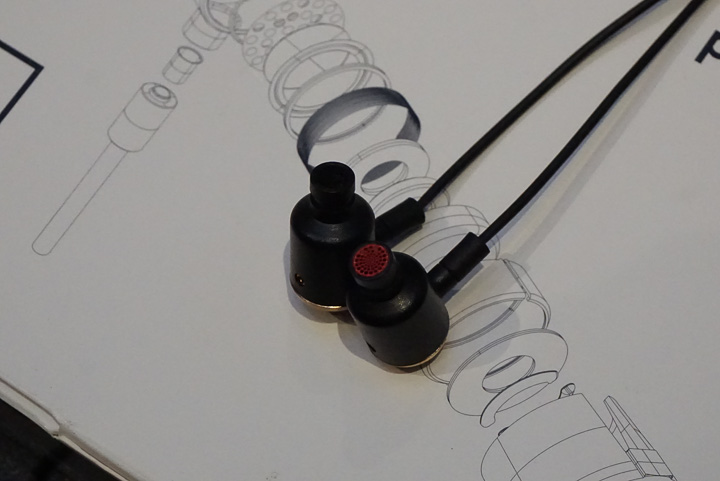 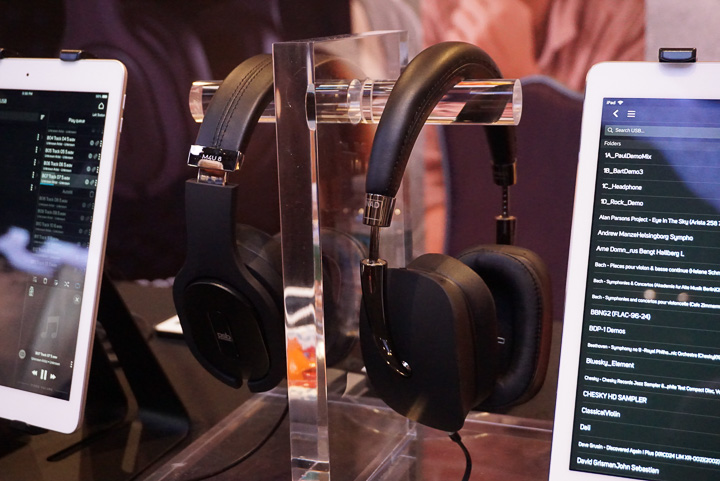 The Canadian firm PSB had shown its impressive new M4U8 headphone in pre-production forms at past shows, but CanJam NYC marked the first showing of the full production release M4U8 ($399). In essence, the M4U8 is a substantially updated version of the critically acclaimed M4U2, but with greatly increase functionality. Specifically, the M4U8 is, like the original M4U4, capable of being driven as a passive headphone or as an active self-powered headphone, but the M4U8 adds Bluetooth functionality and is equipped with an all-new, switch selectable automatic noise cancellation (ANC) system. While the core sound of the M4U8 is similar (though I would say somewhat better than) to that of the original M4U2, the new model’s amplifier sounds even clearer, its Bluetooth capabilities are exemplary, and—perhaps the biggest surprise of all—its ANC system, an analogue design implemented through an AMS device, is one of the very best I’ve ever heard. As a finishing touch, the M4U8 incorporates switch selectable room mics, so that users can suspend music listening temporarily, to participate in in-room conversations or to hear announcements in airports or train stations. In short, the M4U8 is better than the original M4U2, but sells for the exact same price. 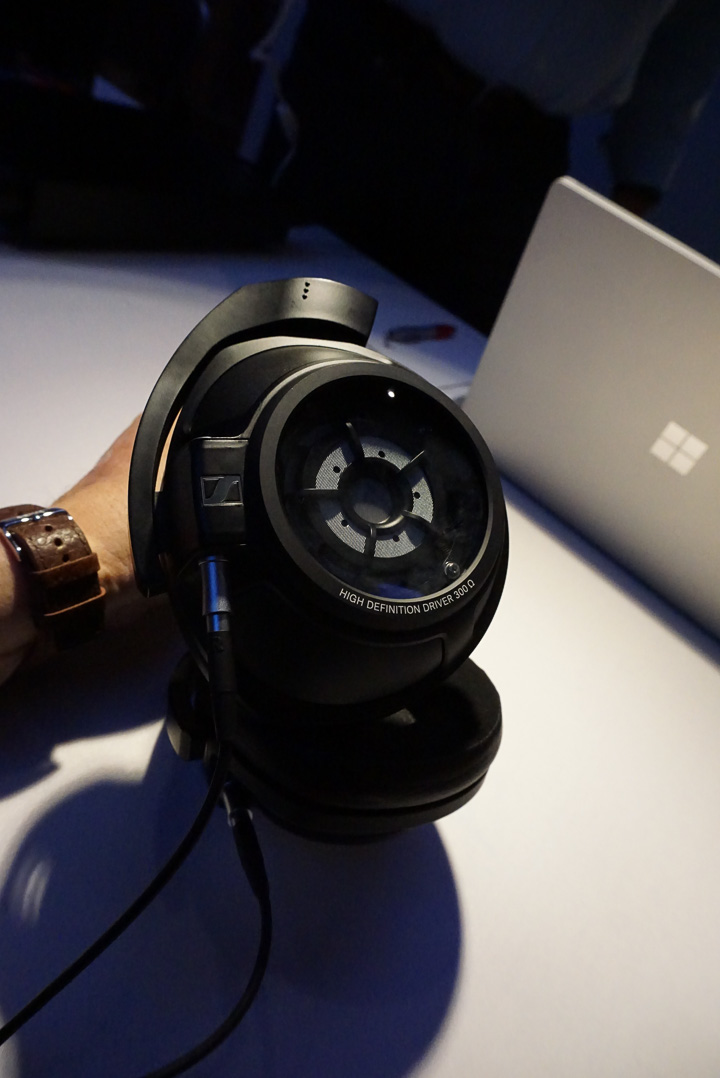 The legendary German headphone manufacturer showed two new headphone models at CanJam NYC: one, the HD660S, that is already released and the other, the upcoming HD820, that is slated to go into full product release later in the year.

The HD660s ($499) is the successor to the HD650 and the latest in a long line of high performance headphones that began years ago with the debut of the then-ground breaking HD580. What is particularly significant about the HD660s is that it represents a serious attempt on Sennheiser’s part to create a medium-priced high-end headphone that captures much of the sonic essence of the much higher-priced HD800/HD800s-series models. Based on a too-brief listening session, I would say Sennheiser is well on the way toward this goal, which makes the HD660s an extremely attractive option in its price class.

The HD820 (projected price $2,399) will be Sennheiser’s entry into the ultra high-performance closed back headphone market segment and as such the HD820 does everything it can to channel the sonic goodness of the open-back HD800 and HD800s models. Astute readers will note that the HD820 is significantly higher priced than either the HD800 or HD800s. When I inquired about the price differential a Sennheiser spokesman indicated that the HD820 has higher build costs from a material perspective and is also more labour intensive to build than the open back models are. One very cool design touch is that the HD820 ear cups feature Gorilla-glass driver viewing windows on their back surfaces so you can see the technology within on display.

The sound of the HD820 is similar, but not identical, to the HD800s, but with—of course—far less intrusion from room noises, which are most blocked out by the closed back design. 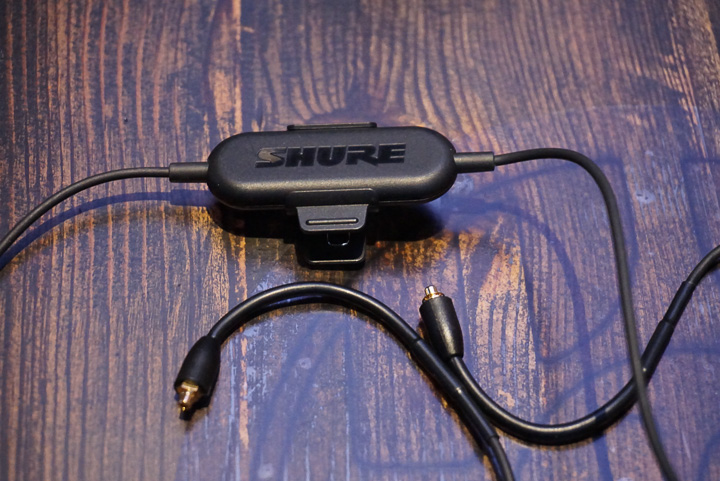 Shure was not showing new earphone or headphone models at CanJam NYC, but what it did display was a greatly expanded range of option earphone cables (fitted with MMCX-type connectors on the earphone ends) including: a Lightning signal cable, a USB Type C signal cable, a self-powered Bluetooth cable, and a cable with an inline headphone amp/DAC module. 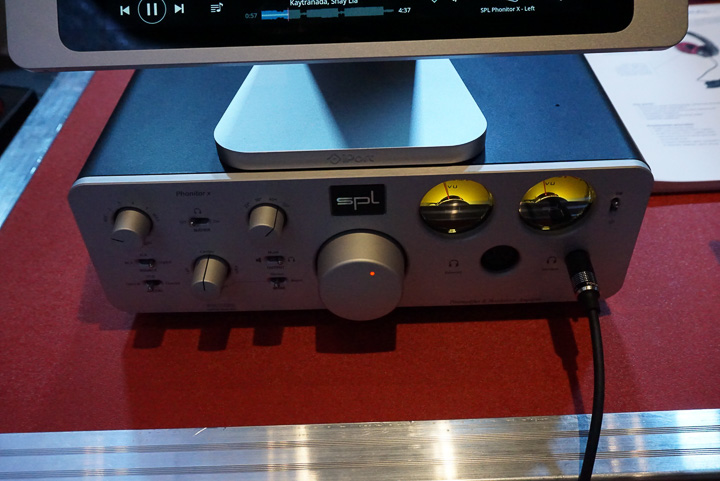 The German headphone amplifier specialist SPL showed its very full-featured Phonitor X balanced headphone amp/DAC ($2,799) with special crossfeed and lateral imaging control functions. SPL comes from the pro sound world and its products have the purposeful and well-built look and feel that is so much a part of the pro audio world. 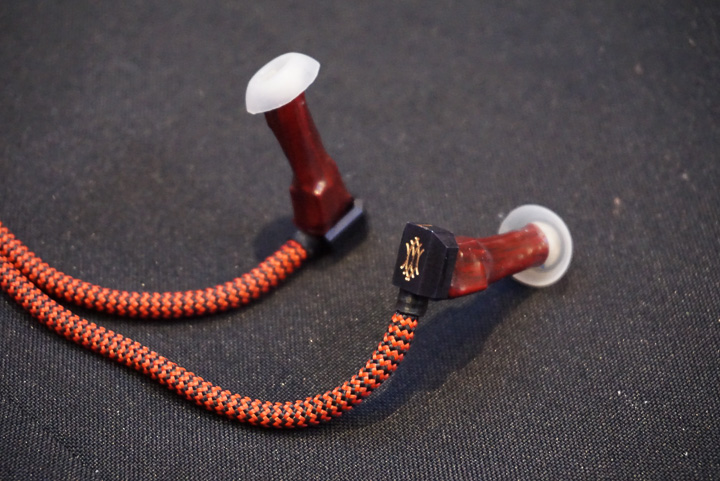 The Russian firm Stereo Pravda showed the latest and least costly new member of its essentially hand made SB-series earphone. The newest model is called the SB-5 and it features five drivers plus a new signal cable and will sell for $2,000. Having heard various Stereo Pravda SB-series earphones over time, I think the design has great sonic promise, but my one complaint is the SB ear tips, which are quite unconventional and don’t necessarily work well for all listeners. My thought is that if the ear tip issue could be sorted out, the SB models might win much wider acceptance. 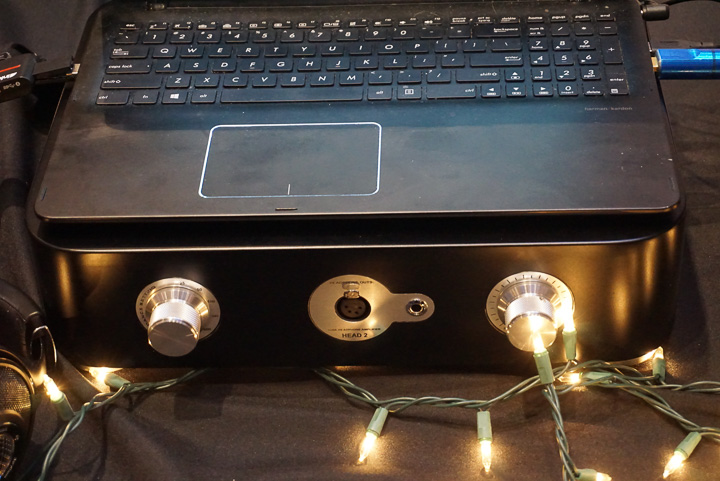 The Serbian firm Trafomatic demonstrated three very promising headphone amplifiers, including the Experience Head One ($1,800), the Head Two ($3,000), and the extremely exotic looking and valve-powered Trafomatic Primavera dual-mono headphone amplifier ($15,000), which is based on Svetlana 811.10 direct heated triode valves. 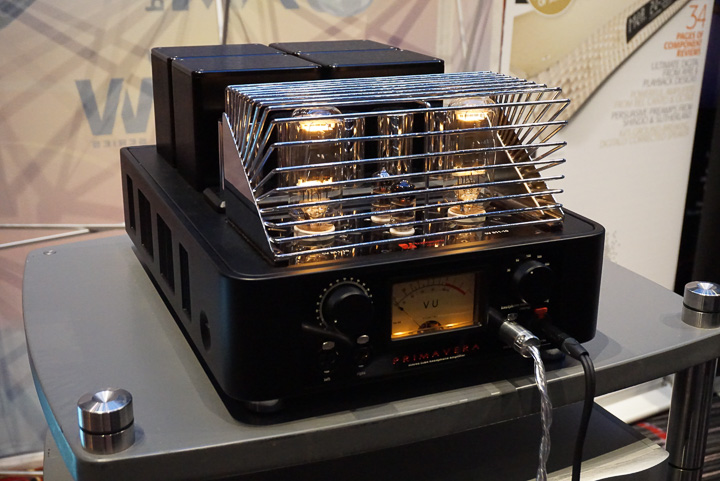 A brief listen to the Vermeer/Primavera combination driving a set of Final D8000 planar magnetic headphones convinced me that the big Trafomatic amp has a very firm grasp on sonic excellence. 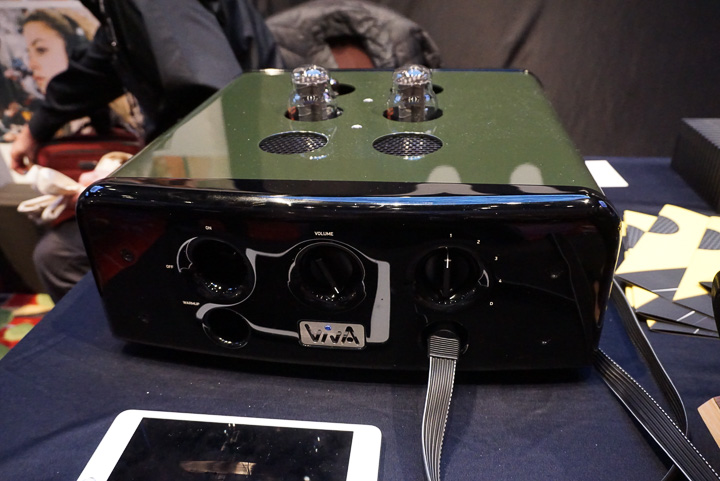 For electrostatic headphone devotees, and Stax headphone users in particular, the Viva Egoista STX stands as a statement class amplifier that is typically configured with dual 2A3 output valves, but that can be configured with 300B output valves instead. US pricing for the Egoista STX has not been firmly established, but is expected to at <$10,000. 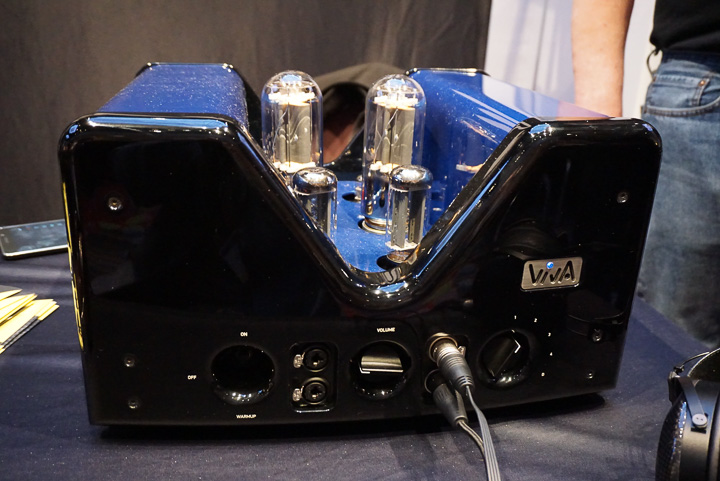 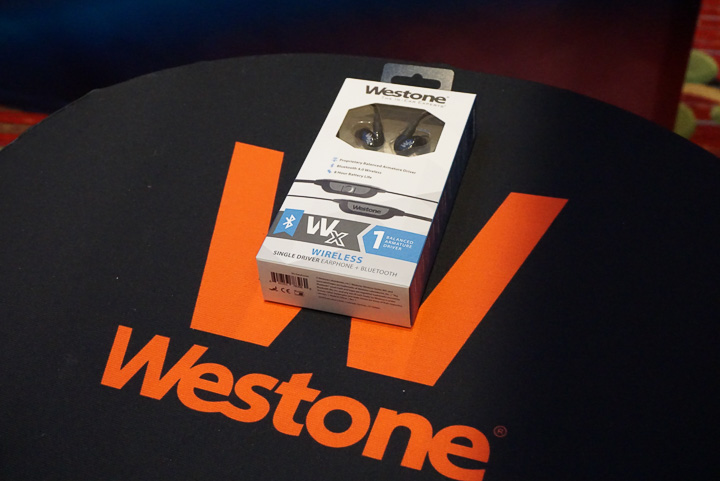 Ultimate Headphone Guide is a new bi-annual publication that represents […]