What follows is Part 2 in a four-part series of snapshot-style reports on new (or at least new-ish) personal audio products seen at CanJam RMAF 2017.

For the sake of clarity, we have broken out coverage into four segments:

1More has been on a roll of late and for CanJam RMAF 2017 their big new product reveal involved an all-new Dual-Driver, Lightning-compatible automatic noise cancelling earphone that will sell for $149.99. Unlike many ANC-type products, the 1More is all about preserving sound quality while still offering meaningful levels of noise cancellation. Accordingly, the new headphone provides ANC function on a separately grounded cable independent of audio signal lines and uses what 1More terms ‘gentle ANC’ to preserve sound quality and eliminate some of the more audible and undesirable side-effects of noise cancellation as implement in other earphones. 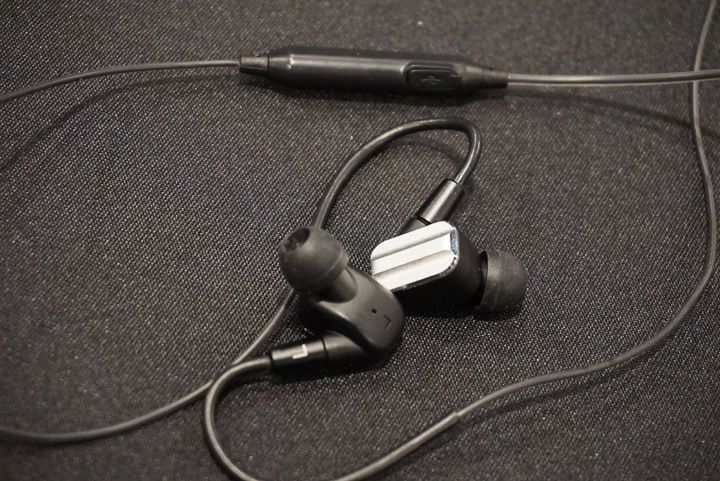 The E10 is AR’s flagship earphone and as such it is powered by the hybrid combination of a single balanced armature-type driver, plus a Beryllium dynamic driver. The earphone comes with a 3.5mm signal cable fitted with 2-pin connectors on the earphone end, a BT cable, and a balanced cable fitted with the impressive new Sony-developed Pentaconn connector. The price: $249.99. 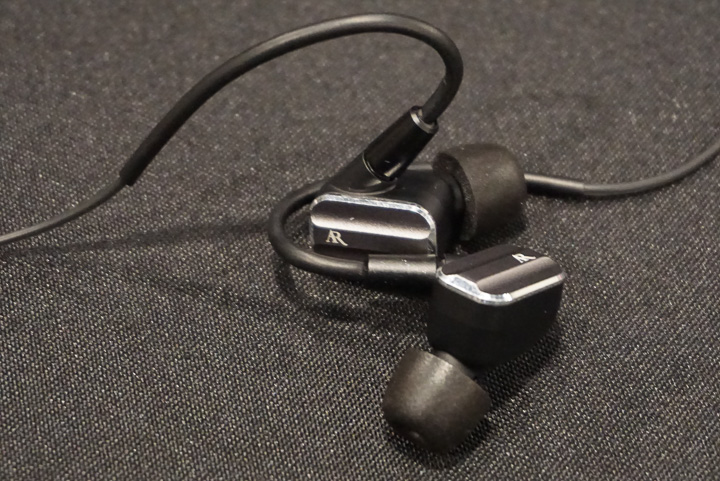 AR’s E100 earphone could be seen as a ‘junior’ version of the firm’s flagship E10 earphone, but one that features a single Beryllium dynamic driver.  The E100 ships with a 3.5mm signal cable fitted with 2-pin connectors on the earphone end, plus a Bluetooth cable, and sells for $149.99. 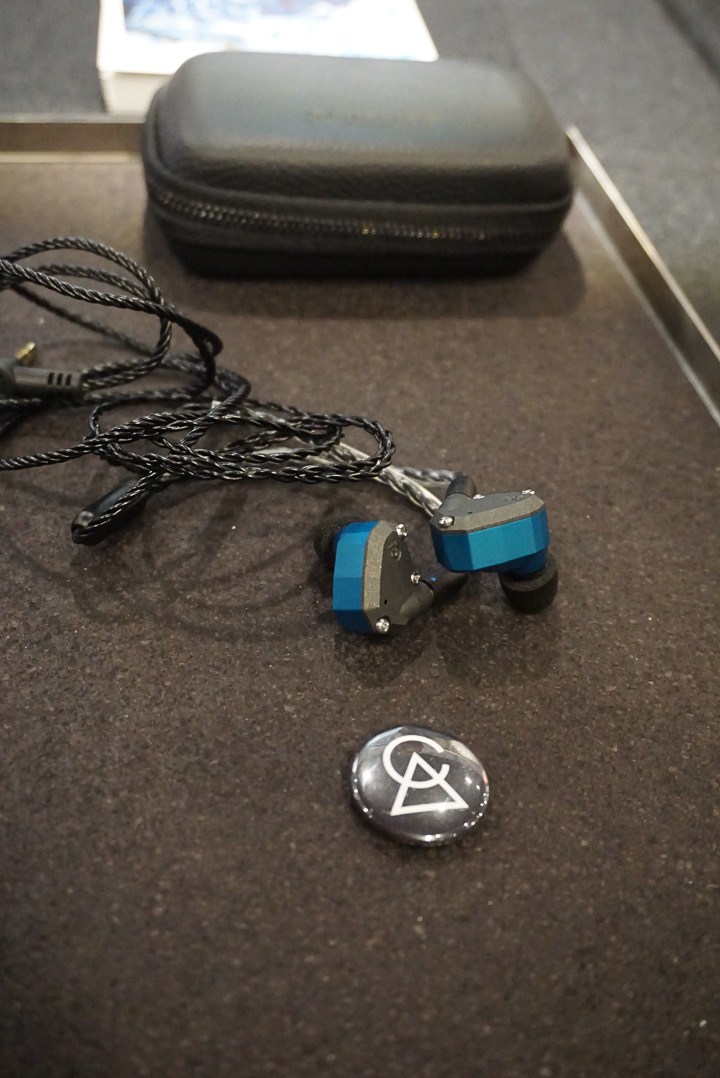 As many Hi-Fi+ readers may already know, Campfire Audio is both a spin-off from and sister to the Oregon-based brand ALO (Analogue Line Out) Audio, where Campfire’s sole focus is on manufacturing extremely high quality universal-fit earphones. Debuting at CanJam RMAF 2017 was a new mid-priced offering from the firm called the Polaris, priced at $599. The Polaris uses the hybrid combination of a dynamic mid-bass driver and two balanced armature-type midrange/tweeter drivers. Like almost all Campfire designs, the Polaris features machined aluminium earpiece enclosures; in the Polaris, the main enclosure is treated to a bright blue anodised finish while the outer caps or lids are finished in Cerakote black.

The dynamic driver portion of the enclosure uses what Campfire calls a ‘Polarity Tuned Chamber’, while the balanced armature drivers use a so-called ‘Tuned Acoustic Expansion Chamber.” The earpieces are fitted with beryllium copper MMCX jacks, while the earphones feature 3D-printed sound outlet ‘spouts’ sporting dual sound outlet ports. Finally, the Polaris earphones come with high quality Litz wire signal cables terminated with MMCX connectors on the earphone end and a 3.5mm plug on the source end. A high quality case and an excellent and versatile set of accessories and ear tips are included. 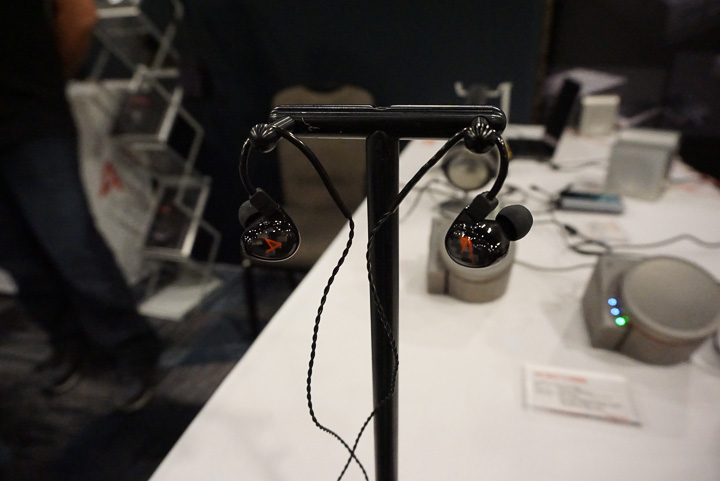 Astell&Kern’s new Michelle Ltd. is a universal-fit earphone co-developed with Jerry Harvey Audio and that essentially provides an updated and cost-reduced version of the Michelle earphone. The Michelle Ltd. is based on three balanced armature-type drivers (one low-frequency, one midrange, and one high-frequency driver) and will sell for $399.

Beyerdynamics’ new Xelento Wireless earphone is a variation on the firm’s superb Xelento passive earphones, which use the firm’s signature Tesla-type driver technology, but in this instance one that comes both with passive MMCX-type signal cables and with a high-quality AAC, aptX, aptX HD, and SBC-compatible Bluetooth module complete with 3-button universal remote control.  Users enjoy all the benefits of a true top-tier passive earphone, but with the add-on capabilities only a high-quality Bluetooth module can provide. The Xelento Wireless should arrive in December of this year and will sell for $1199. 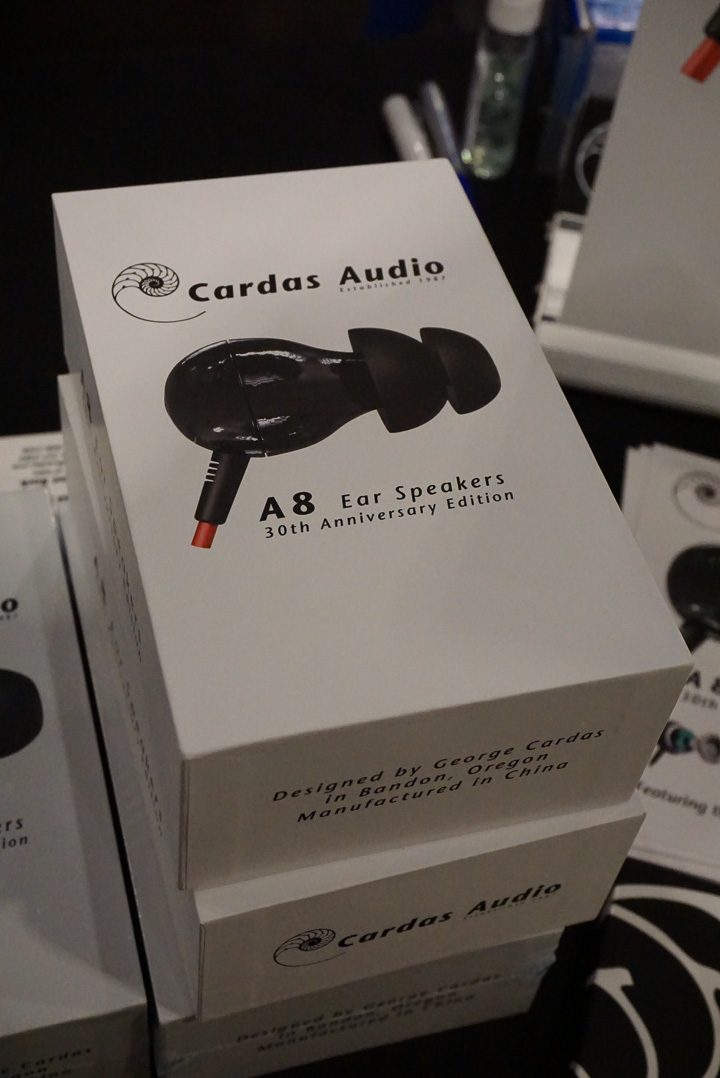 We have covered the advent of Cardas’ new 40th anniversary version of the A8 earphone in past show reports, but are pleased to report that it is now fully released and shipping. The price of the 40th anniversary A8 is $349. 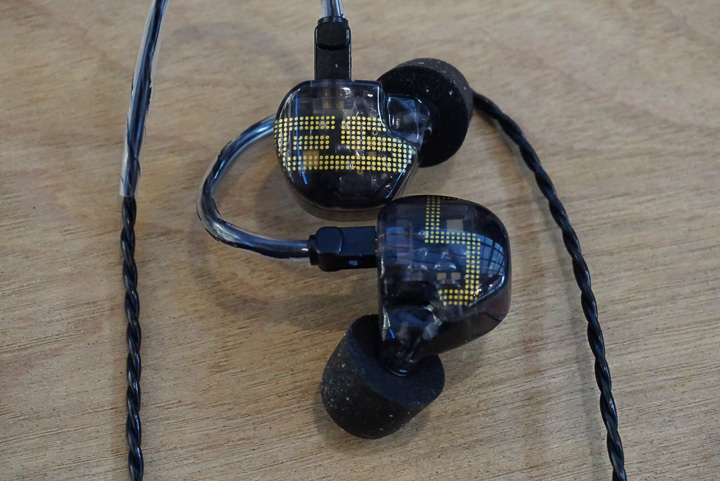 The French firm EarSonics demonstrated its newest model, which is the upper mid-tier ES5 universal-fit earphone, which is based on five balanced armature-type drivers (one bass driver, two midrange drivers, and two high frequency drivers). Based on a brief listen, our perception was that the ES5 offers a very subtly ‘V-shaped” frequency response curve with solid bass, ample mid-to-high frequency response, and very gently recessed or ‘scooped’ lower mids. The price of the ES5 is $1,099. 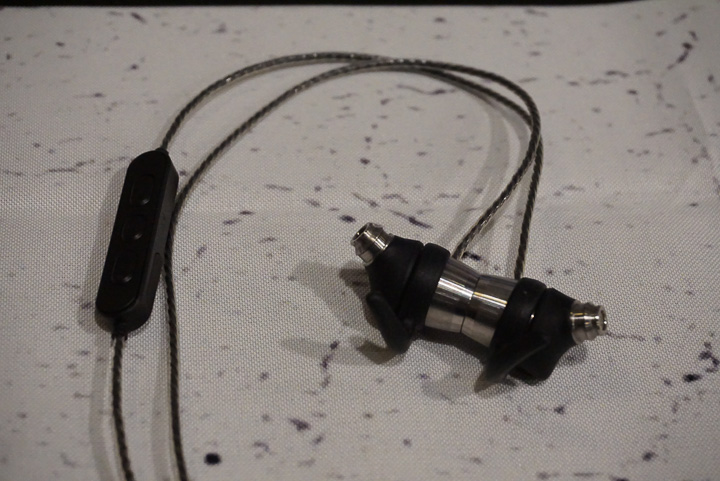 Echobox Audio preview an upcoming Bluetooth earphone that is based on the firm’s new Traveler earphone, but now given an expanded role via an included Bluetooth module. The Traveler features Titanium earpieces and a dynamic driver fitted with a PEEK (Polyether Ether Ketone) diaphragm—a material used in several other Echobox earphones and in the upcoming Vanguard headphone. The working title for the new Bluetooth model is the T1 22 BT, which is projected to sell for $129. 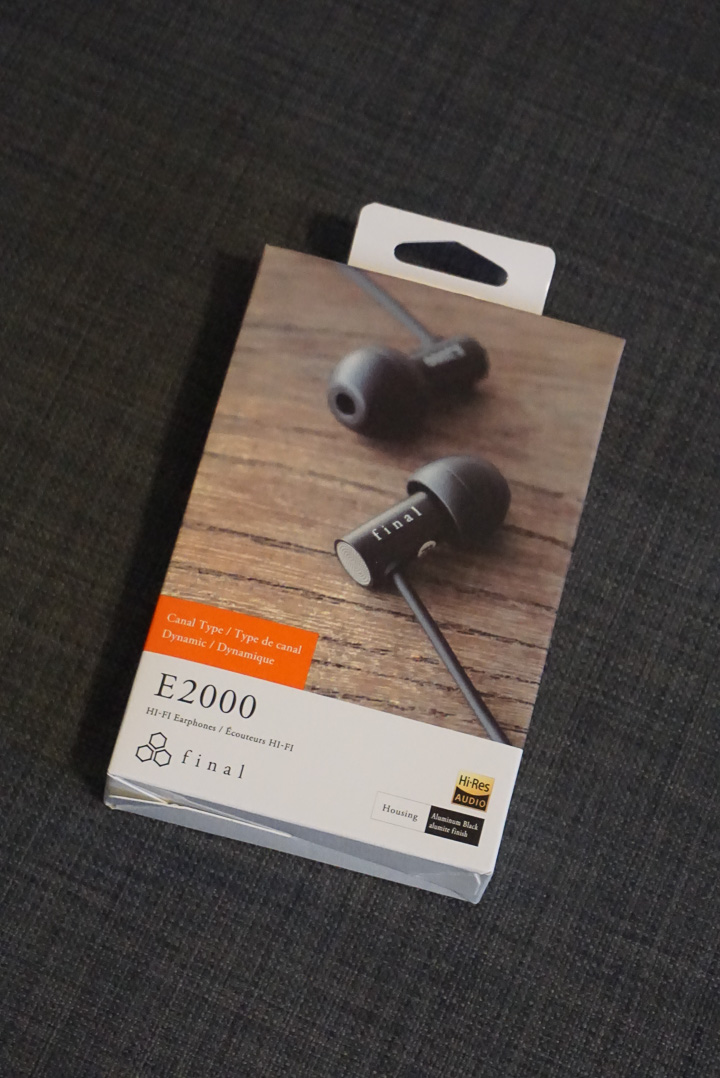 Final showed the second member of its hyper-affordable E-series earphone range: namely, the E2000 model, which sells for just $44.90 (or $45 in round numbers). The E2000 is conceptually similar to the E3000 as recently reviewed in Hi-Fi+, but is deliberately given slightly warmer and more bass-enriched voicing, which will certainly be pleasing to listeners who prefer earphones with a moderate touch of bass lift. As with the E3000, build quality for the E2000 is very high, especially in light of the modest selling prices. This is an earphone that is inexpensive, but by no means ‘cheap’. 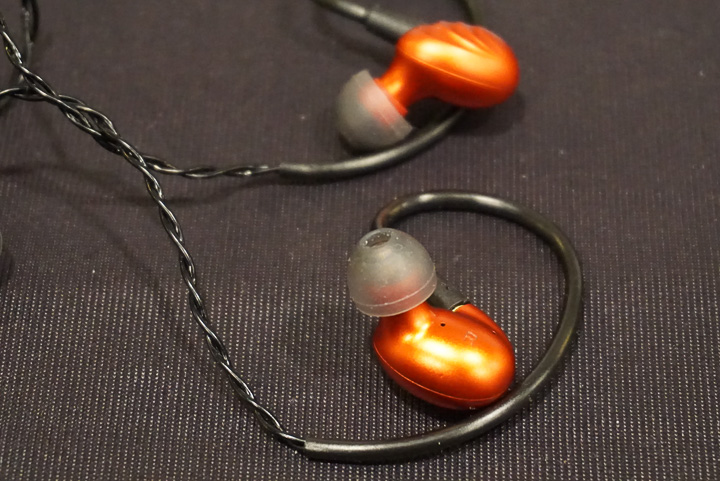 The value-minded team at FiiO proudly showed its new F9 earphone, which features the hybrid combination of a single dynamic bass/mid-bass driver plus two balanced armature-type drivers. The dynamic driver uses a light but very strong PEK (polyether ketone) diaphragm. Claimed frequency response is 15Hz to 40kHz. The F9 comes with an extensive set of accessories and is set-up for use with user replaceable MMCX-connector-equipped signal cables. The F9 ships with both a balanced signal cable and a single-ended cable fitted with an inline mic/remote module. The price: $99.95. 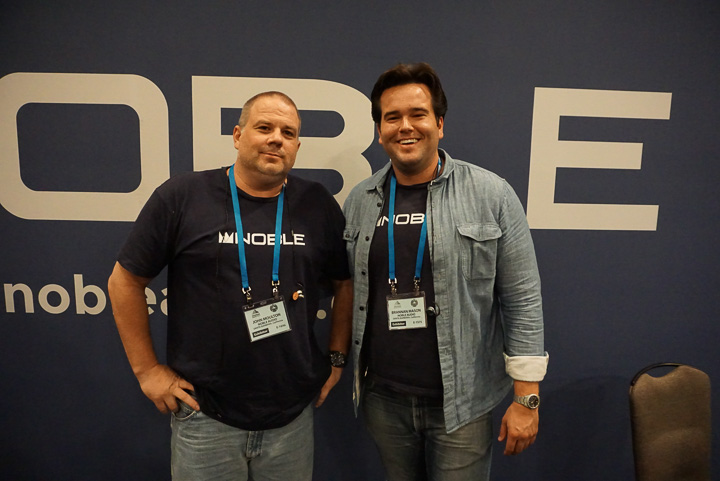 Noble co-founder Dr John ‘The Wizard’ Moulton put in a rare appearance at CanJam RMAF (Pictured above, left, with Noble’s Brannon Mason pictured right) and he took time to speak with Hi-Fi+ about three upcoming Noble models he has under development (we got to hear the prototype versions, but at Noble’s request we did not photograph them as their appearance is expected to change considerably en route to production).

The first new model will be part of Noble’s universal-fit earphone range and will feature triple balanced armature-type drivers.  This model will likely take its place somewhere in the range between Noble’s present Trident model ($399) and the recently released Sage model ($599). In fact, we would not be surprised to see the new earphone presented as an updated variation on the Trident theme.

Then, the next two models are what Moulton characterizes as EDC or Every Day Carry models that will—for the first time in Noble history—be based on all-new single dynamic drivers. The dynamic models will come in two versions: an entry-level model with an aluminium earpiece/driver enclosure that should sell for about $120, and an upscale model with brass earpiece/driver enclosures and that will come with a higher quality signal cable. The upscale model will sell for about $299.

The aluminium model should appear around November of 2017, while the brass model will follow later on. Based on a brief listen to the prototypes, we were impressed by the levels of performance Noble’s new dynamic drivers were able to achieve (their sound is reminiscent of that produced by Noble’s more costly balanced armature-equipped earphones). 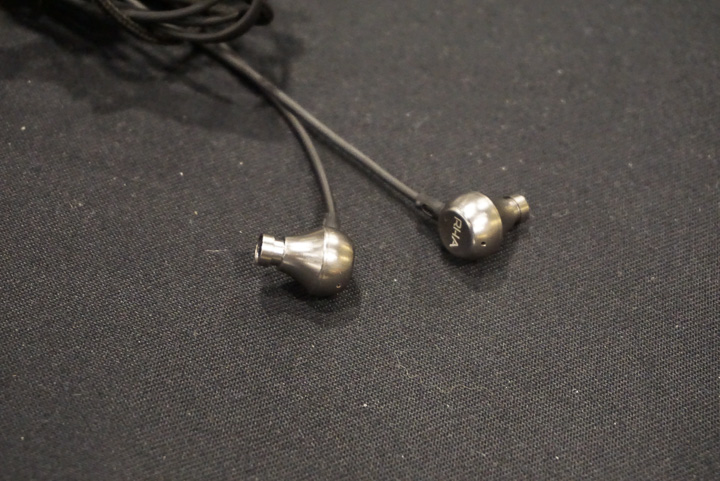 The MA390U ($29.95/£19.95) is the entry-level earphone in the RHA line-up, yet it provides some of the same core ingredients as found in the Scottish firm’s more upscale offerings such as solid aluminium earpiece enclosures and dedicated RHA type 130.8 dynamic drive units. What is more, the earphone comes with an inline universal remote/mic module. 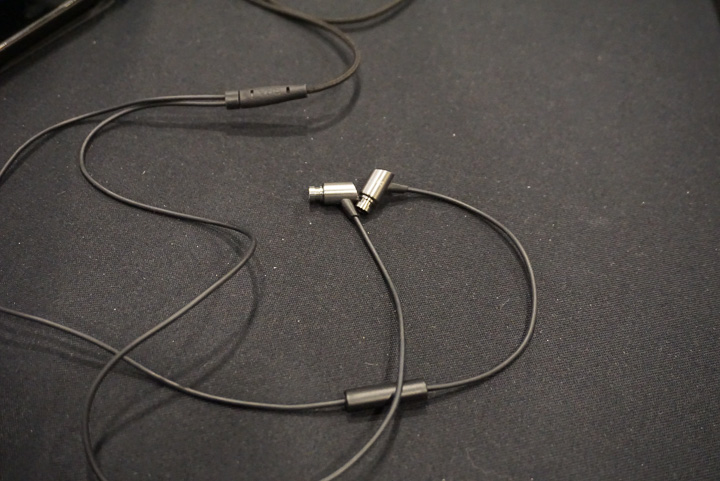 The ultra-compact S500U ($39.95/£29.95) is the latest iteration of RHA’s popular S500 earphone that again features aluminium earpiece enclosures, a purpose built RHA type 140.1 dynamic drive units, and an inline universal remote/mic module. Like virtually all RHA earphones, the S500U comes with a broad and useful set of ear tips. 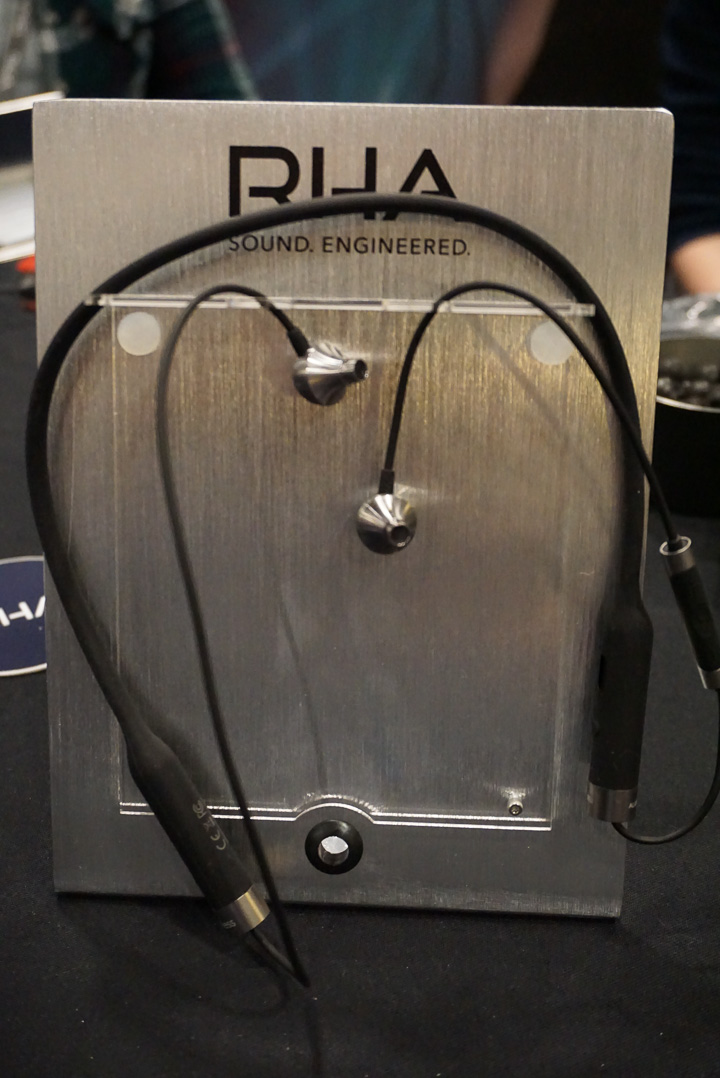 The MA750 Wireless ($169.95/£149.95) is in essence a wireless/Bluetooth adaptation of RHA’s classic MA750i passive earphone.  In fact, the MA750 Wireless is essentially what happens if you were to take a set of MA750i earphones and to marry them with RHA’s necklace-type wireless/Bluetooth module. The earphones proper feature 303F stainless steel earpiece enclosures, RHA’s precision =-made 560.1 dynamic drivers, and come with a very broad range of ear tips. The Bluetooth module is essentially identical to the one used in the MA650 Wireless earphone and supports AAC, aptX, SBC Codecs. Voicing is admirably neutral. 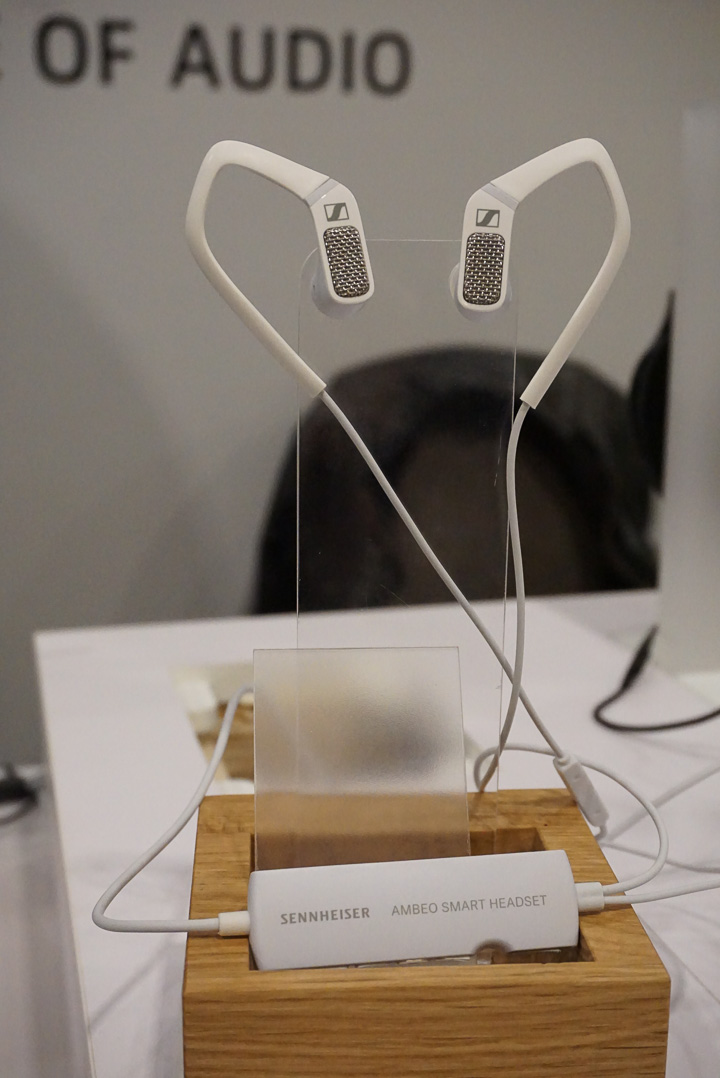 For people who not only enjoy listening to music but recording it as well, Sennheiser has just the thing in the form of its AmbioSmart earphones, which also double as surprisingly high quality binaural microphones. The AmbioSmart earpieces provide conventional transducers for audio playback, while the outer shells of the earpieces contain embedded high-quality microphones. This opens up a whole world of possibilities in that users can capture videos on their smartphones while using the AmbioSmart to record high-quality binaural soundtracks for the those videos. The AmbioSmart comes with a Lightning compatible cable incorporating a building in earphone amp/DAC plus an ADC module for recording purposes and an associated control app. The price: $250.

Westone’s UM1 is a single balanced armature-equipped earphone with user-replaceable MMCX-type signal cables that represents a concerted effort on the Colorado Springs, CO-based firm to bring out a genuinely high-quality earphone that neatly slips below the $100 price barrier. The UM-1 sells for $99.99 and is the least expensive earphone to bear the Westone name. 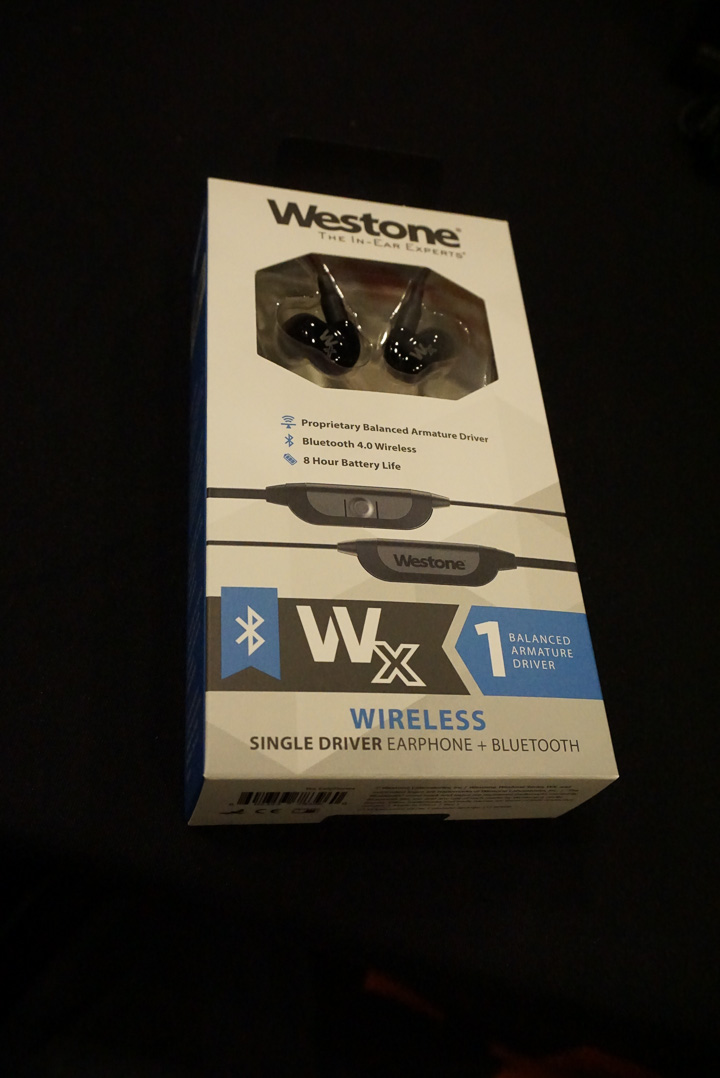 The WX1 is essentially what you get if you bundle Westone’s new UM1 earphone with the firm’s new Bluetooth 4.0/aptX earphone cable to create a nice, neat, turnkey Bluetooth earphone system. The WX 1 package sells for $149.99.